The plans I made for this weekend were way different than what actually ended up happening. I was going to have the house all to myself for the whole weekend! I made a bunch of plans with friends–even double booked Saturday so I got to see two friends that day! But my body had another plan, apparently.

Michael was in Seattle Thursday-Sunday for work. I spent Thursday night watching the first disc of “The Closer” (why has it taken me so long to watch this show?! It’s so good!) and making holiday cards from scratch. I was starting to feel the beginnings of something…sinus headache, kind of achy. Unfortunately, as the weekend progressed I came down with a full-fledged head cold.

The good news: I was able to do some fun things before the black plague took over my body and kept me on the couch. Friday night I met my friend Robyn for dinner at Stickers Asian Cafe in Sellwood. I wasn’t feeling too sick yet, just congested. I ordered a bowl of the hot and sour won ton soup with the hopes that it would clear me up. 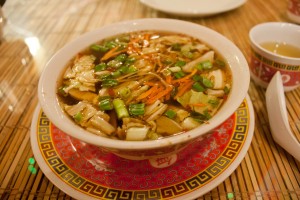 The soup was spicy and delicious. I ate some of the soup and saved the rest for lunch the next day. Robyn and I shared an order of Jiaozi dumplings. They were lighter than potstickers and really good. We ordered them with shrimp in it and I was glad we got a full order. 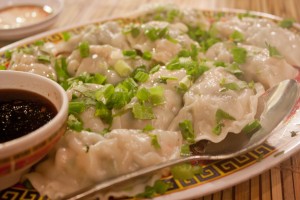 Then we split the Bangkok Tangy Sesame Noodles. It was yakisoba noodles with chicken and peanut sauce. The noodles were just okay. While I like sweet things, and I do like peanut sauce this dish was a little overpowering for me so I didn’t eat very much of it. I liked Stickers a lot and will probably go back. It was a diverse menu with Chinese dishes, Thai and Indian curry dishes. It’s a good place to go to satisfy lots of different cravings.

It was nice to see Robyn and I also got to hang out with another friend. My friend Debby and I saw Lincoln. What an outstanding movie! The costumes and sets were wonderful and there were so many scenes that had “Oscar” written all over it. Daniel Day-Lewis was mesmerizing as Abraham Lincoln and I found myself riveted when he spoke. When the film was over the whole theatre clapped. I really recommend this movie!

On Sunday I had planned on attending the memorial for Kirk Reeves, a legend here in Portland who died recently. For years, Kirk sat at the end of the Hawthorne Bridge downtown playing his trumpet and waving to people passing by. I saw him nearly every day on the way home from work as my bus passed him by, or I rode by him on my bike. He was the happiest person I’ve ever seen and no one could be in a bad mood after seeing him! 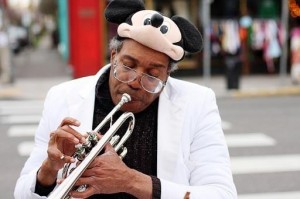 He always wore a white tuxedo with a Mickey Mouse hat. He passed out toys to kids and waved to everyone that went by. I was really saddened by this news. The bridge seems empty without him there now. I wish I could have made it to the memorial and contributed some money for the statue they want to commission but I was too sick by Sunday to do much of anything.

So most of my weekend was a bust. My nose is raw, my sinuses are congested, and my body aches. It’s not a fun way to spend the weekend. I’ve been resting and watching so much TV on Netflix that my eyes hurt but I’m trying to do as little as possible so I’m well enough for the upcoming holiday. I hope you guys are all healthy and taking your vitamins!

QUESTION: What are your plans for Thanksgiving?