Happy 4th of July! I hope everyone is enjoying their holiday with their families and friends. Enjoy the BBQ’s and fireworks. Michael and I are about to go enjoy the sunshine with a hike and I wanted to pop in with a quick hello and a post.

My meals are like teeter-totters some weeks: sometimes they swing to the super healthy, sometimes they swing to the other side where the indulging lives but most of the time they are somewhere in the middle. I’ve been trying to make a conscious decision to limit out the amount of times I eat out in a week. My preferred number is one. I don’t eat out for lunch during the week and usually when Michael and I go out it’s to try a new restaurant–which is something we both love to do and living in Portland it’s an easy thing to do.

Most of our meals at home are the the standard healthy fare you’ve gotten used to seeing here: a protein plus a veggie (usually from our garden). One day after work I plucked a bunch of kale from the garden and cooked it in the skillet with Grapeseed Oil and one piece of bacon chopped up. 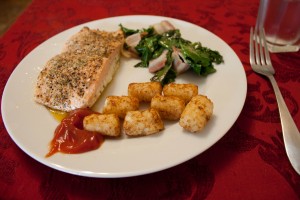 I baked salmon with a little butter, lemon pepper seasoning and dried dill. I added a serving of tater tots to the plate simply because I was craving them. Dinner was around 600 calories total, filling, delicious and healthy. Then of course, the next day we went out and indulged a little bit. Michael wanted to kick off the holiday with a big cheeseburger and I wanted to do one at home. In the end we ended up at The Country Cat Diner. 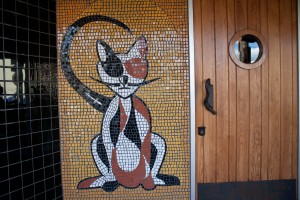 The restaurant was packed when we got there. It was a Tuesday evening, early still but not quite meeting “early bird” standards. There were empty tables but we were told there was only bar seating or galley seating (which was weird, do they take reservations? After we were seated I noticed a booth stayed empty for our whole visit.). The galley seating turned out to be quite fun because we had a front row view of the kitchen. 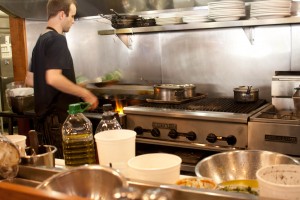 We were both mesmerized watching the three chefs work in tandem behind the counter, smiling and laughing, dancing together like ballerinas without a misstep. We even watched our meal be made right before our eyes. 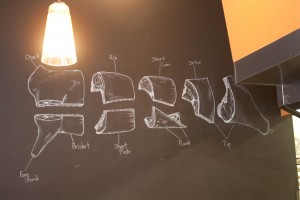 It was difficult for me to decide what to order because everything sounded intriguing. They had fried chicken with mashed potatoes and gravy (my number one choice but I decided to order the burger). There was plenty of vegetarian options too, although their specialty seemed to be meat. 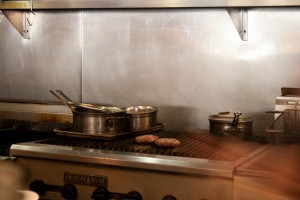 While we waited for our dinner I watched as the various plates emerged, created from nothing, looking pretty fantastic. I commented repeatedly to Michael, “I should have ordered that.” The duck leg look crispy and magnificent, topped with what looked like cherries in a sauce. The salmon wrapped in bacon looked awesome. 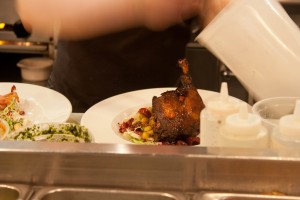 There was a “Flinstone’s Chop” and it looked like it. It was a giant hunk of pork on the bone, glistening in sauce and nestled next to corn. It was humongous, gluttonous-looking and pretty humorous. Thank goodness I didn’t order that. 🙂 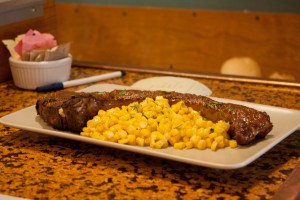 How was the burger? Michael and I both agreed it did not make our top 5 list. To refresh your memory (I know, it’s been awhile):

That is not to say there was anything wrong with the burger, it was unusual in a lot of ways but not good enough to knock anyone of the list so far. The burger was beautiful and the meat was juicy but it was so thickly packed that it was almost chewy. 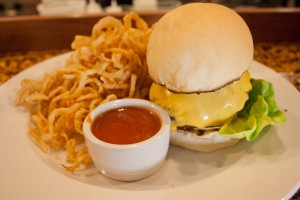 The burger arrived on a delicate bun that was lightly toasted with American cheese, a piece of butter lettuce (the perfect lettuce for a burger if you ask me) and a garlic mayo sauce. The garlic mayo was not overpowering at all, very light, and the homemade ketchup was extremely unique. Neither Michael nor I could figure out what it was made with. It had a smoky and a sweet flavor to it. 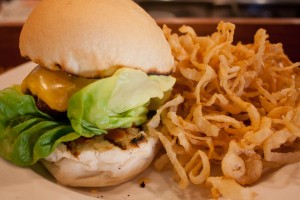 The cheeseburger was flavorful and unique but not the best one I’ve ever had. I really didn’t like the chewiness of it. I like my burgers to be tender, juicy and kind of soft. It may look like it was humongous but it was actually a reasonable size. 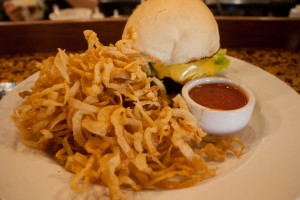 The onion rings, however, were the show-stopper. They were spectacular! Strange, thin, crispy, crunchy, salty, and delicious. I loved how tiny they were. They look like curly fries but were stuffed with sweet onions. The rings were by far the best thing about the meal. We both ate half of our rings and took the rest home. Despite the burger being just ok, we both left satisfied and happy and I didn’t feel like a brick was sitting in my stomach. I guess those onion rings were that fantastic!

QUESTION: How often do you eat out in a week?