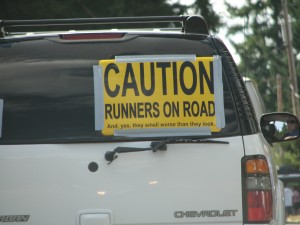 I left off with my first Leg of the Hood to Coast run. For dinner we decided to go to the Hotcake House in Portland. It’s your typical greasy spoon…the kinda joint you go to at 3am after the club closes. I will admit I spent most of my 20’s there at 3am. 😉 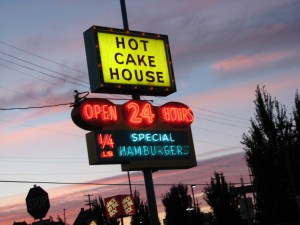 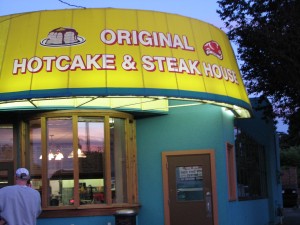 Since I had just finished my first run, I knew I should eat. Especially since I didn’t know when we’d get to eat again. But honestly, I usually cannot eat much immediately after running. I need at least an hour before my stomach settles. I never have the “runner’s runs” or anything like that. Instead, I lose my appetite.

So I ordered breakfast for dinner. I figured that would be what my stomach could handle. I ordered a large orange juice, water, 1 fried egg over easy, sausage links and an English Muffin. It came with a pound of hash-browns. I ate what I could and left the rest. 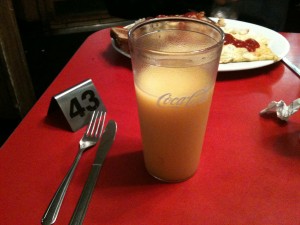 I drank half of my orange juice but my stomach just couldn’t handle much. 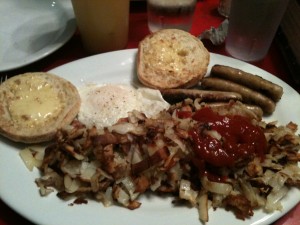 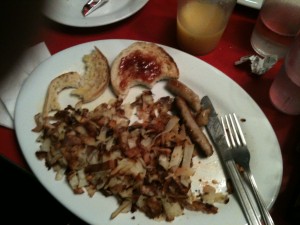 As you can see, I ate half the English muffin, my egg, some hash-browns and 2 sausage links. My stomach was churning too. I called Michael and I called my mom.  It was probably almost 8:30 or 9 at this point. Time to get back in the van. We drove through Portland and connect to Highway 30 to follow the route to the next big Exchange. Van #1 was doing all the running so it was our “time to wait” time.

Highway 30 is a frightening, busy, scary highway and I worried about the safety of the runners. We were all required to wear headlamps or a flashlight, 2 blinky lights and a safety reflective vest. I still worried about everyone’s safety. 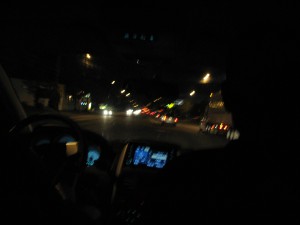 We got to the St. Helen’s fairgrounds and parked the van. It was our time to try and catch some sleep before we had to meet Van #1 at about midnight. 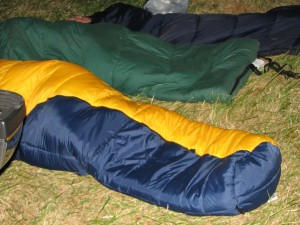 I climbed into my sleeping bag on the ground and tried to sleep. Of course I couldn’t. I was too excited and too high from my run. I tried to at least rest though. It was a strange thing to sleep outside in a field without a tent. And like I said before, this race is one big party so there was tons of noise and commotion going on at all times. Air-horns, vans honking, people cheering, the sound of Vuvazelas. 🙂 After a little while Allen got up and woke us all up. I’d just been laying there trying to sleep but didn’t sleep. We packed up the van and Heather got ready for her next run. We went to the exchange point and waited. I saw this van decorated with Christmas lights: 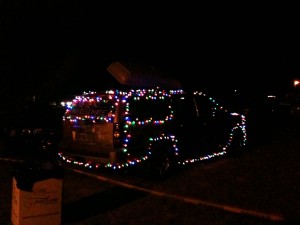 It was dark. It was very cold. There were some tents set up where people were selling coffee, tea, hot cocoa, soup and other food for runners. My stomach was still a little nauseated so I didn’t buy anything. 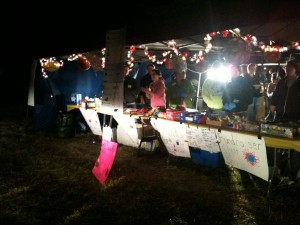 The soup sounded really good though…. 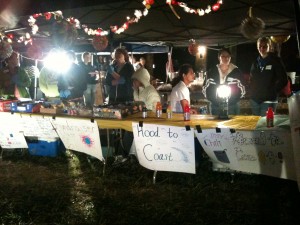 Van #1 finally arrived and Leslie passed on the official team clipboard to Janell to keep track of all our run times. The clipboard had to be with each van that was currently running and then turned in at the finish line for our official team time. 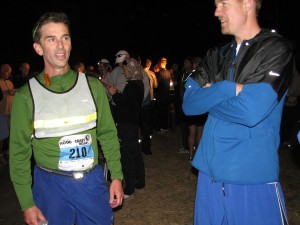 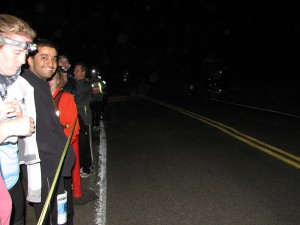 Van #1 passed off to us and they left to go to the next Exchange where we’d meet them in 6 hours or so. Heather took off running and we drove to meet her at the next Exchange. I wasn’t tired yet, but I was starting to feel “weird.” Like those weird “wired” feelings you get when you’re full of energy but tired at the same time. It was mesmerizing sitting in the van watching the runners in the dark. Sometimes all I could see was the reflective vests.

Our first runner (Heather) had a good section through the countryside (aka Middle of Nowhere). It was through a forest with scattered houses here and there. The downside? It was all uphill. And definitely the setting of a horror movie! 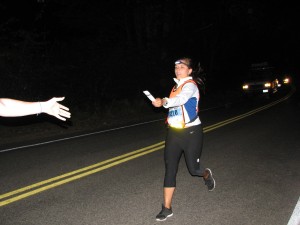 This next part of the story is not a great experience for any of us, I think.

These next 3 legs were the ones my teammates had been dreading. I knew it would be on gravel roads, but I had no idea what to expect for them. I did not really get any pictures at this time. It was dark for one, and we didn’t have much time. The congestion on the roads was AWFUL. The vans were barely moving. Not only that, our runners were running on gravel roads. UPHILL. They had to wear bandannas on their faces just to breath. Janell has asthma and took her inhaler with her. Janell had been dreading her second leg all day. It was literally uphill the entire time. And steep too. Now add into that gravel roads and horrible dust kicked up from the vans = not fun.

Janell did pretty good on her run. She tagged Allen and he took off. Since the congestion was so bad, our next runner in line was having to get out and walk probably a mile or so to the Exchange or else they would not meet our runner for the exchange. Not good.

It was 3 am and getting closer to my turn to run. I was anxious. While my first Leg had been filled with confidence and security because I knew the route, my second Leg was a complete mystery.

One thought on “Hood to Coast: After My First Run”