I’m not sure what the weather is like in your neck of the woods, and maybe you’ve seen the news, but Portland has been basically on fire for the last week! And this coming week is going to stay in the mid-90’s! Talk about a hot summer!

Well last week Portland broke some records with a heat wave. At one point they were predicting 109 degrees and I’m not actually sure if it ever got quite that hot, but it was at least 105 at our house for three days straight. Friday arrived and we were so thankful that our friends invited us to spend the weekend at the beach with them!!! 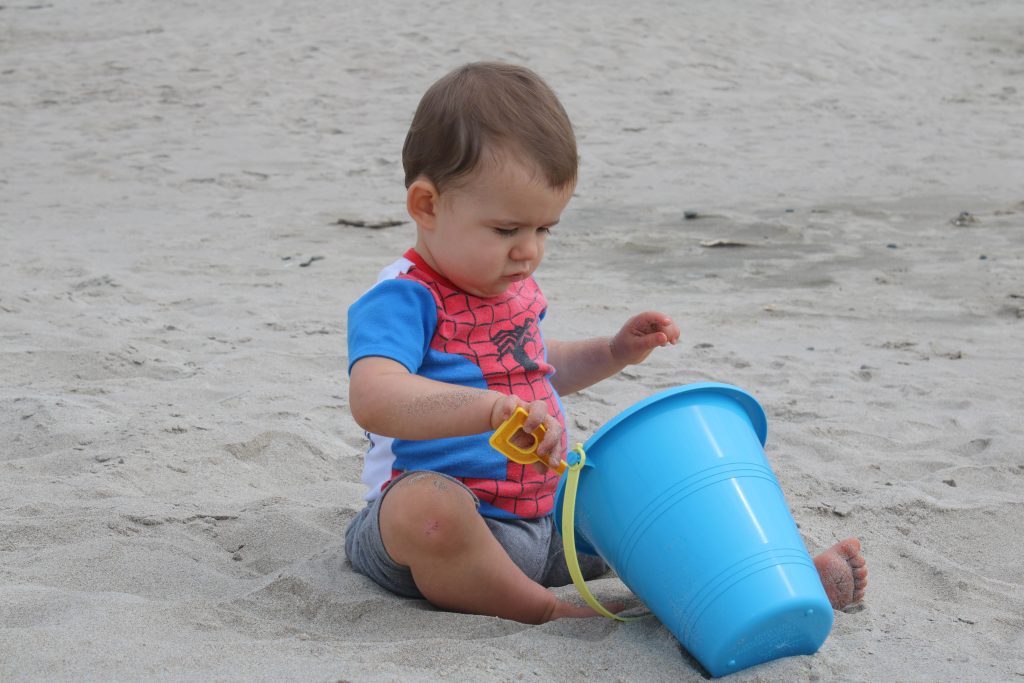 We were supposed to go a few weeks ago, but something came up and they had to reschedule. Which turned out to be a blessing in disguise because the weekend we rescheduled it to was hot as hell and at the beach it was perfect–70 degrees and lovely. Michael and I both got off work a little early on Friday and packed up the car, then picked up Logan and we headed to the coast! 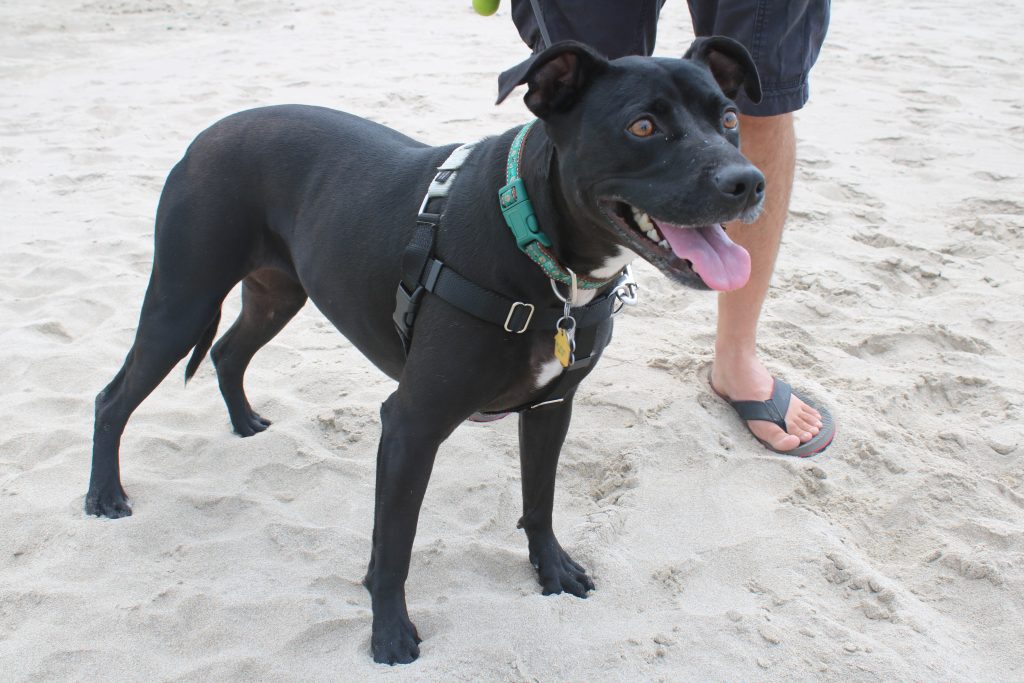 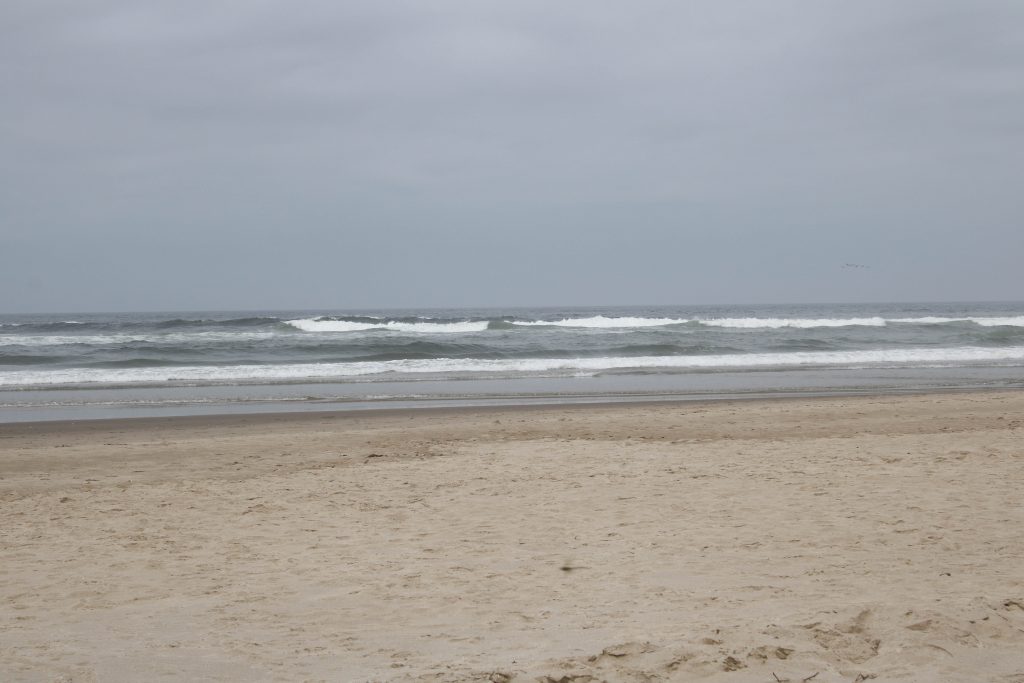 We were expecting a mass exodus from the city to cooler temperatures and were fully prepared for the usual 90 minute drive to take 3 hours. We were kind of leaving during rush hour traffic on a Friday. But, we somehow lucked out. The worst traffic was trying to get through downtown and once we passed the zoo, it was smooth sailing. 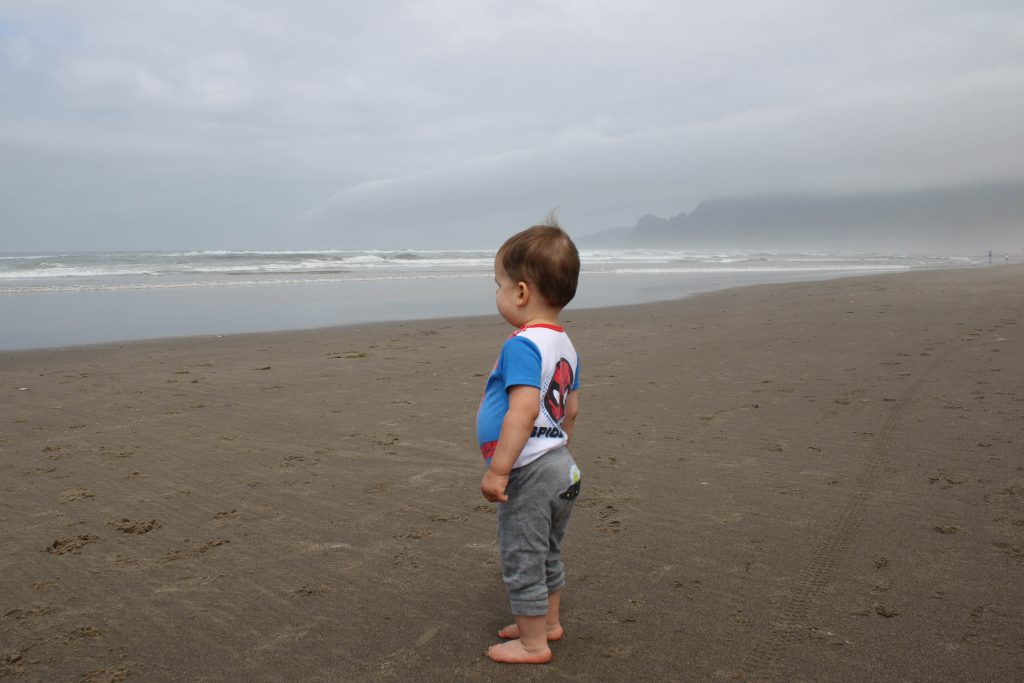 Logan took a little cat nap in the car (like for an hour) ooooops! But that ended up working out in our favor! We got to Manzanita to our friend’s house, they made a great dinner (grilled chicken and steak and baby potatoes) and we ate outside on their deck, a block from the ocean. It was getting late (it ended up taking 2 hours to drive there, so NOT three!!!) and we just relaxed a bit, then Logan went to bed (way past his bedtime) which meant he actually slept in on Saturday! WOWZA. Double lucky for us! We got to sleep in on Saturday until 7:30am. 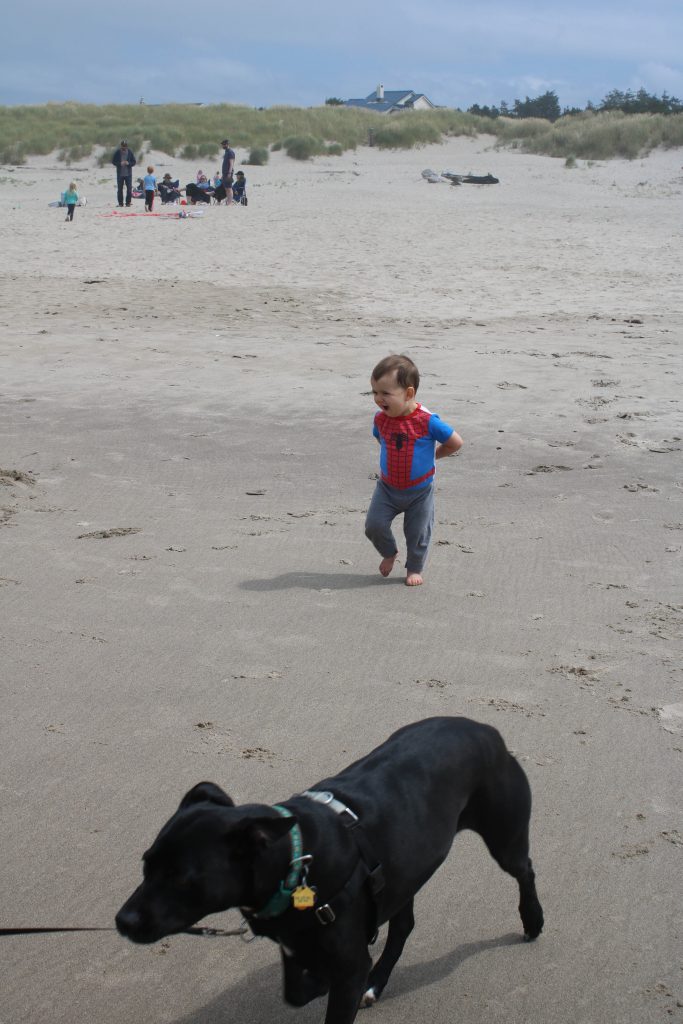 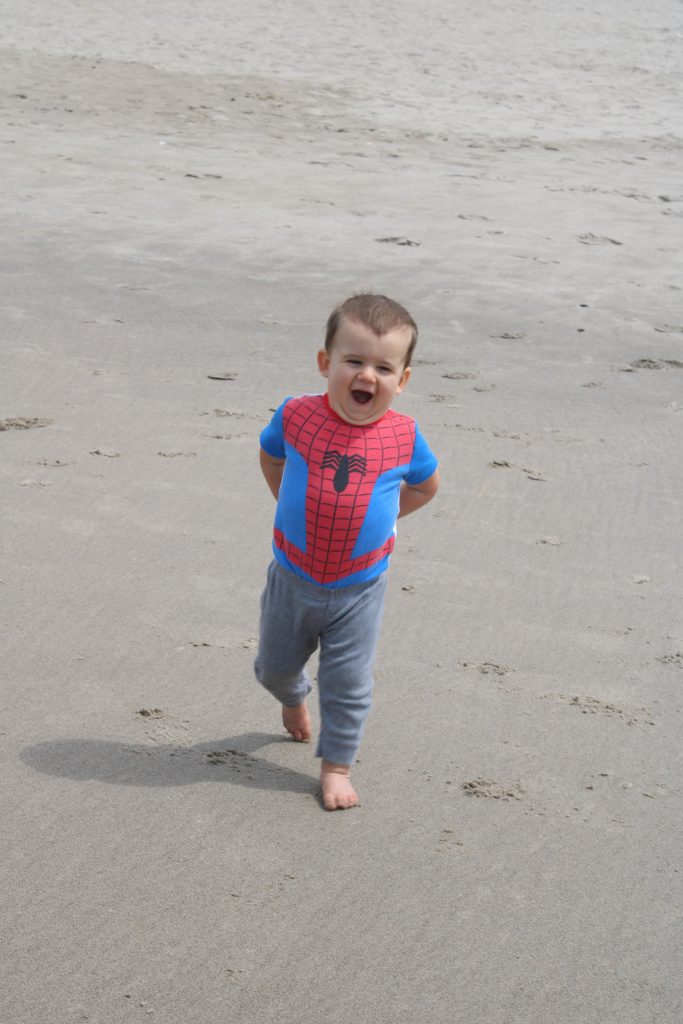 We got up, had breakfast, packed up some beach stuff and walked a block down to the beach. Logan had a blast! And so did Bella! She loves the beach. 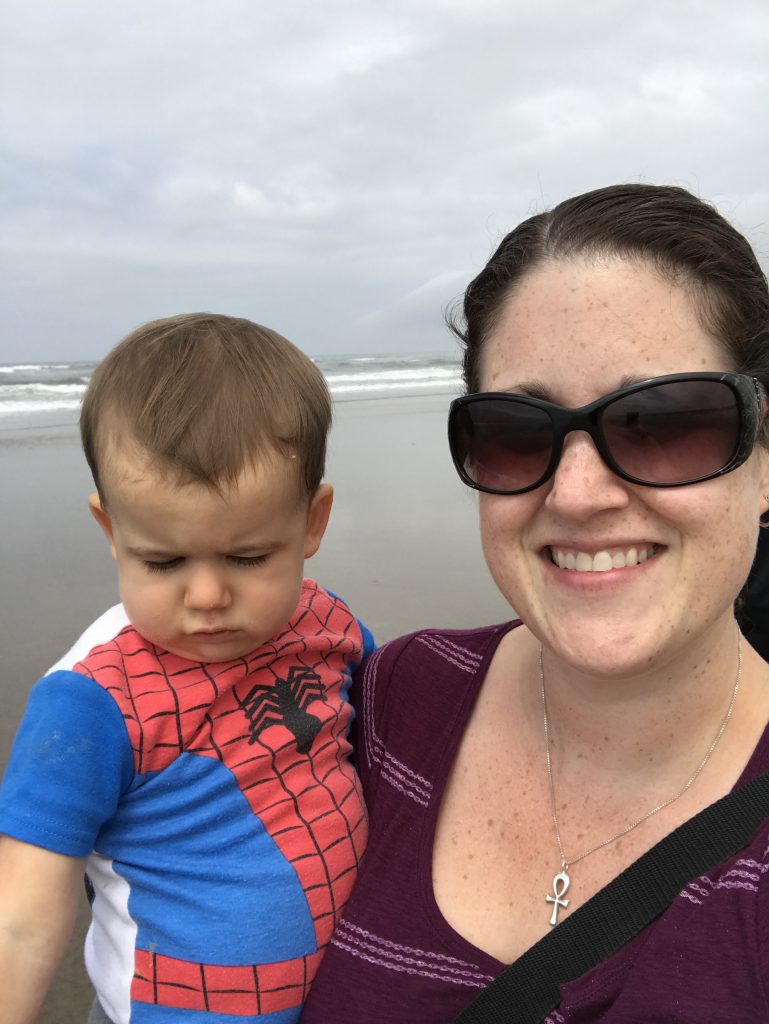 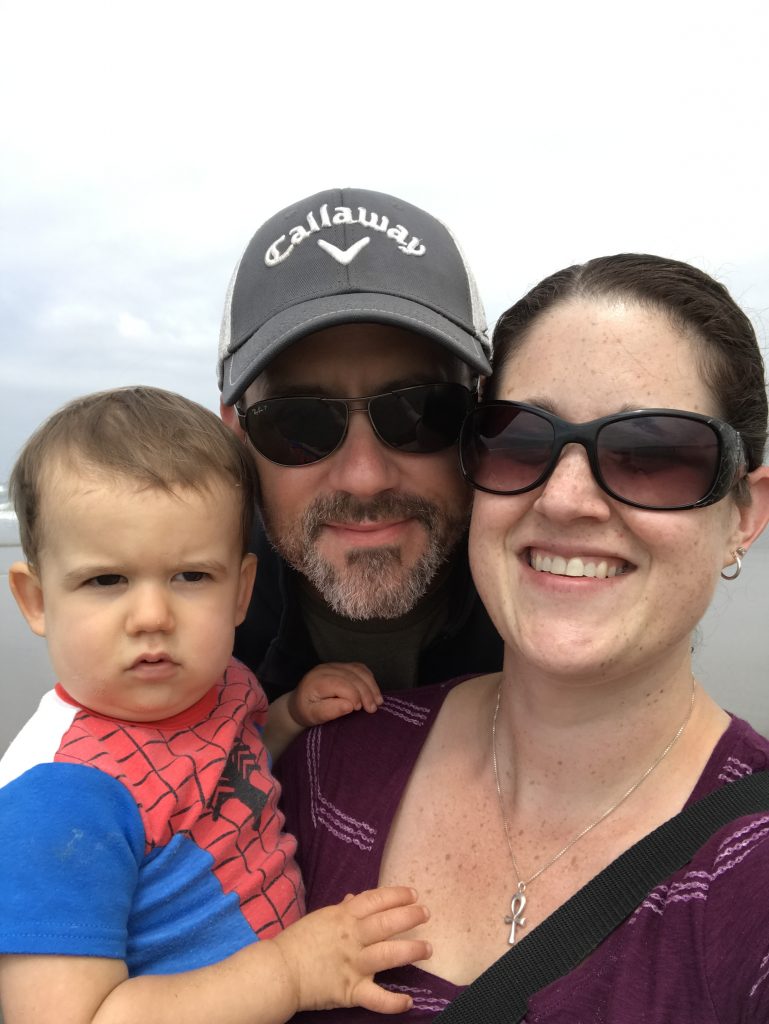 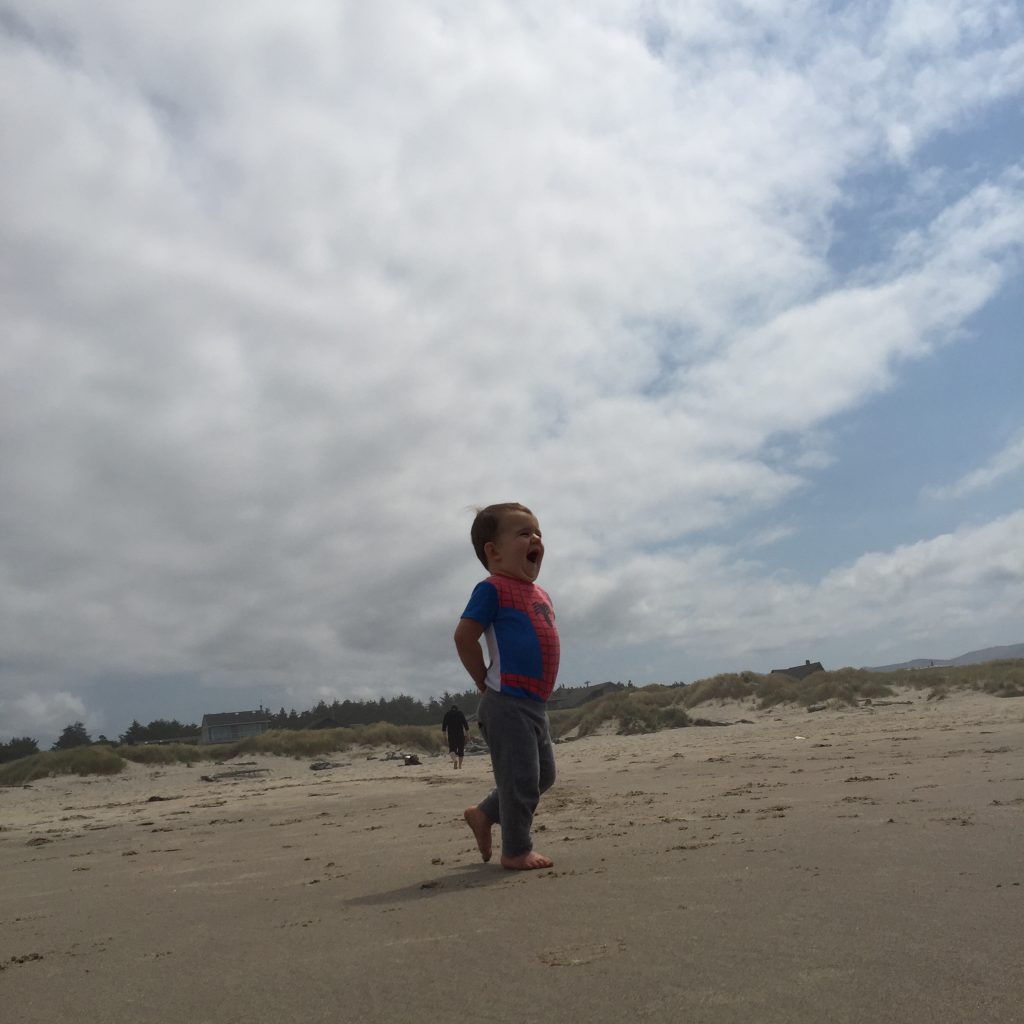 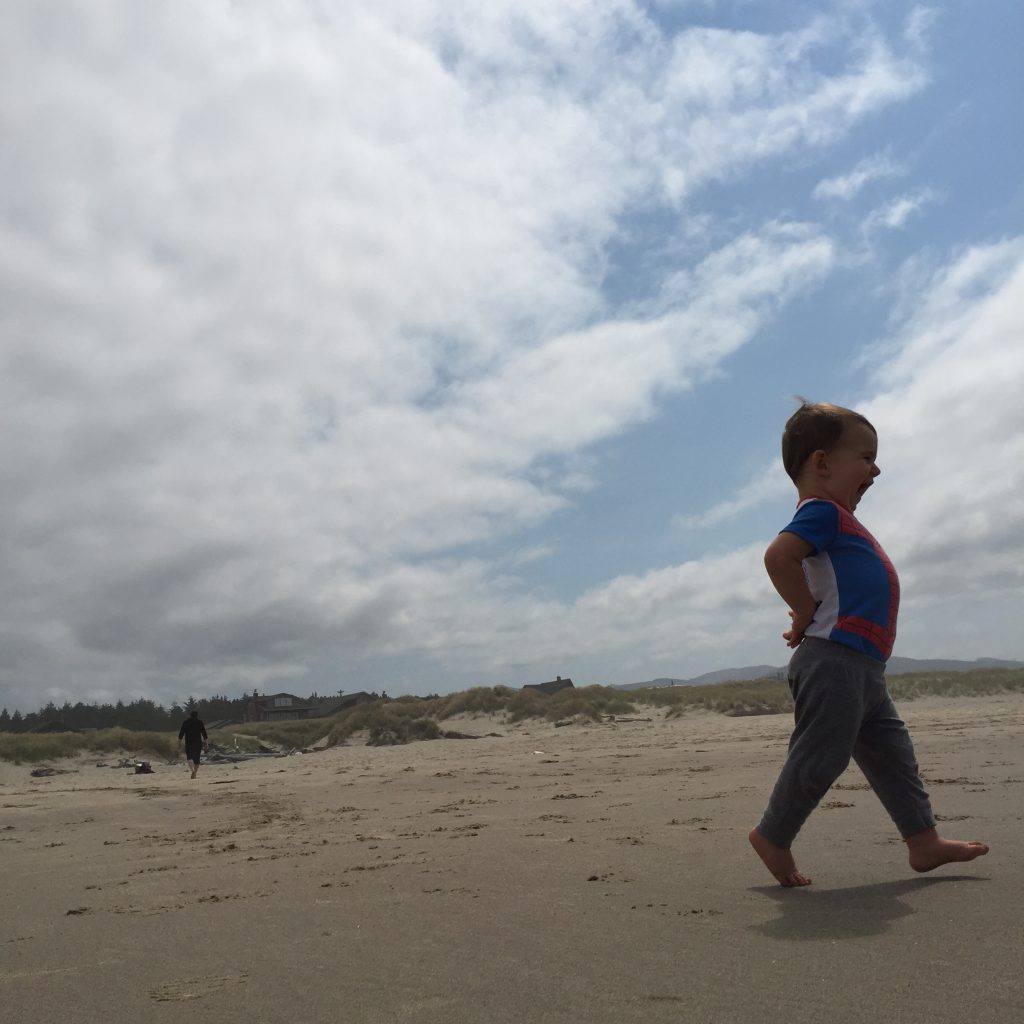 Those two pictures above were taken by our friend Christi (who is a professional photographer and who has done our newborn and 1 year old photo shoots). How funny are those poses Logan is doing? Haha! So Logan had a blast playing in the sand, watching Stu build sandcastles, and filling his bucket with sand. Then it was getting kinda past nap time so we headed back to the house to clean up and Logan took a nap. 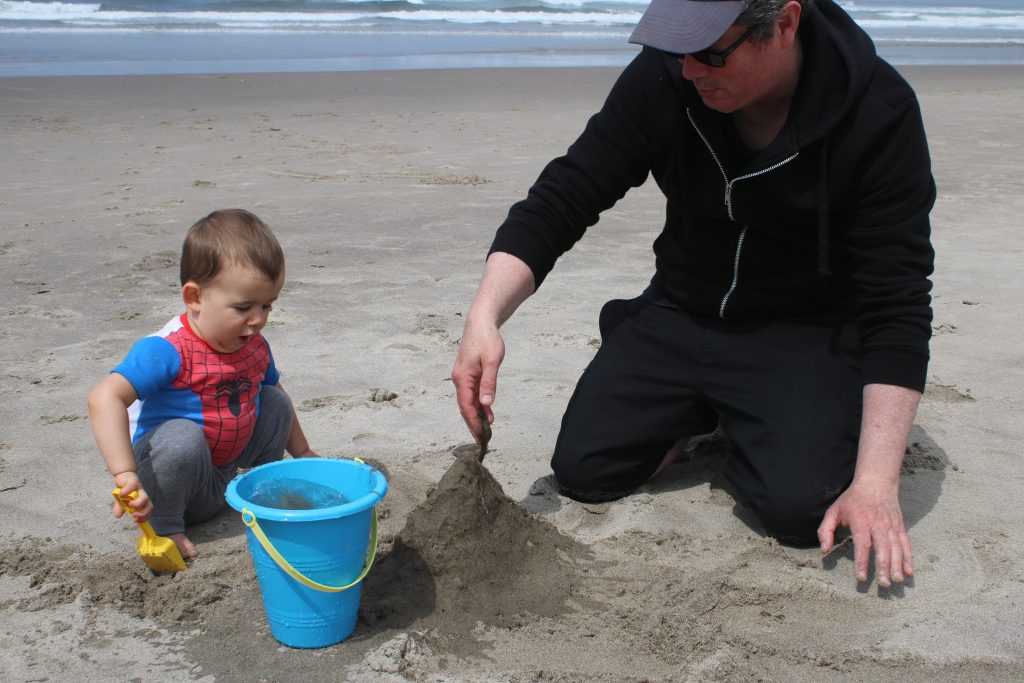 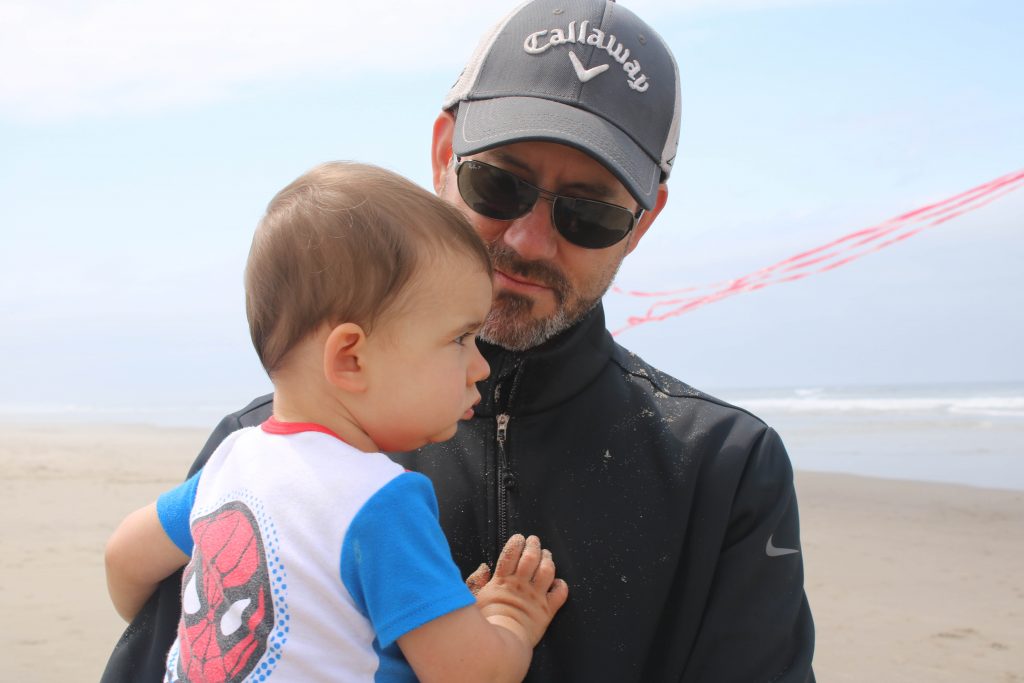 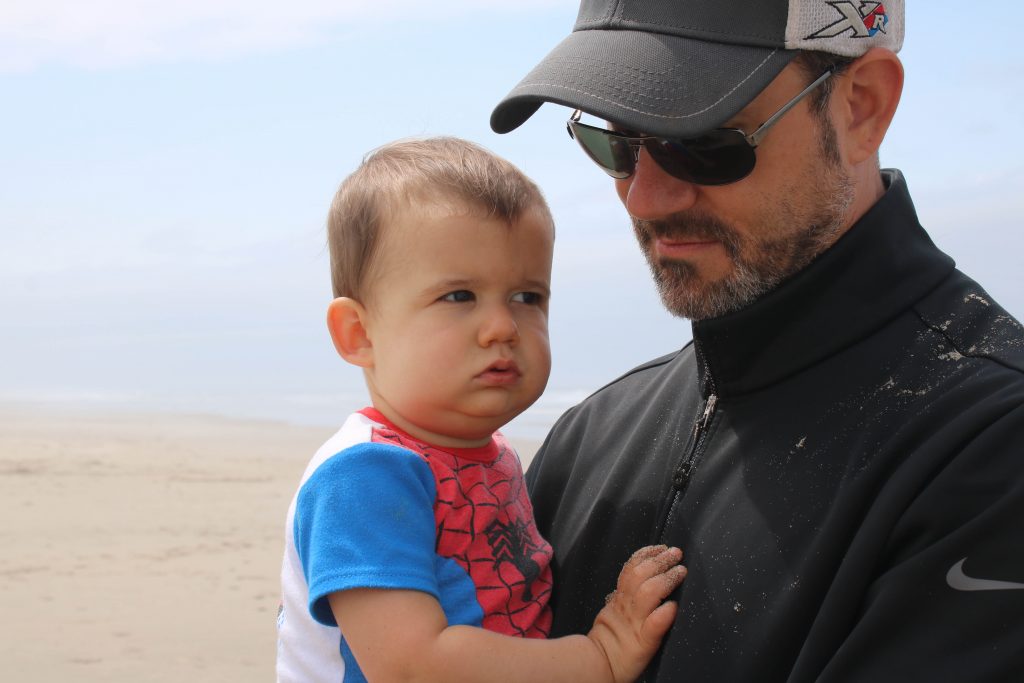 We did manage to get a few family photos for the weekend, which was nice. 🙂 I’m usually the one taking the pictures! 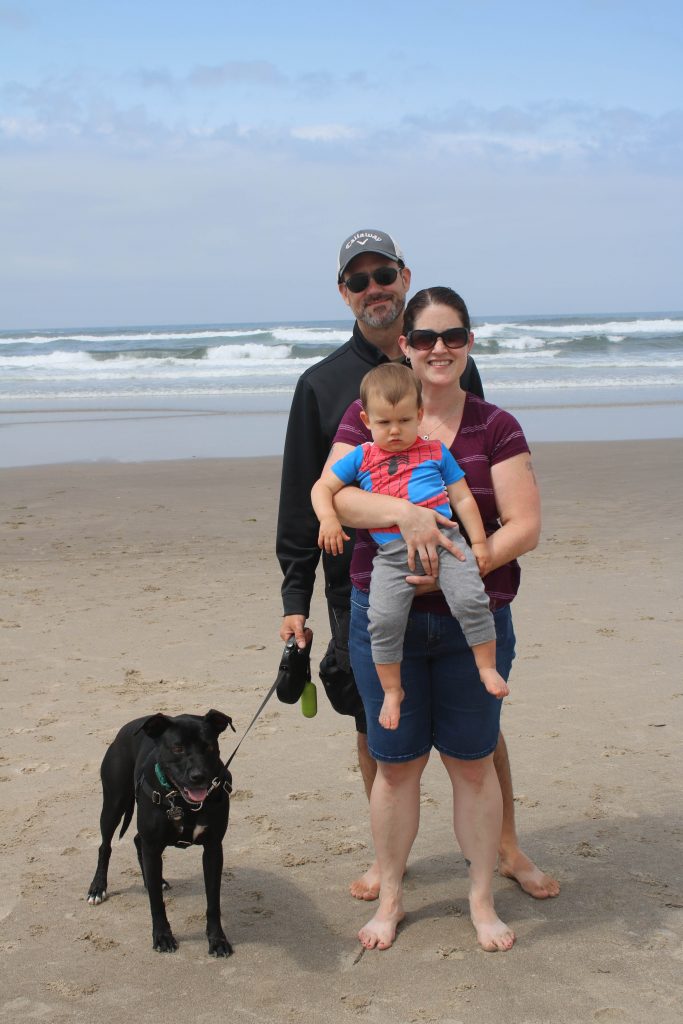 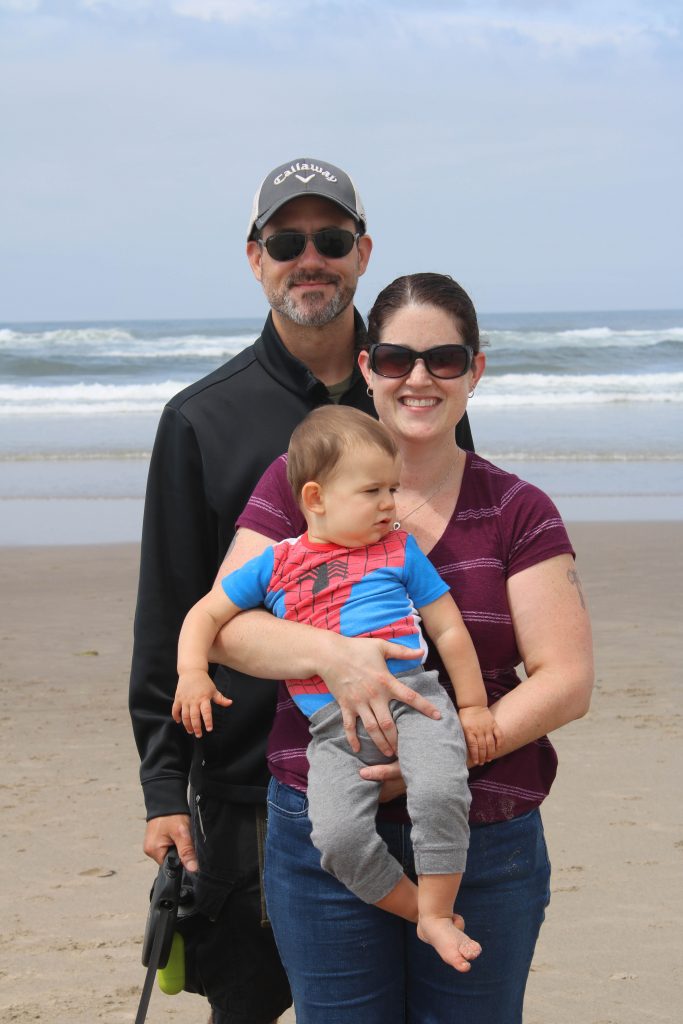 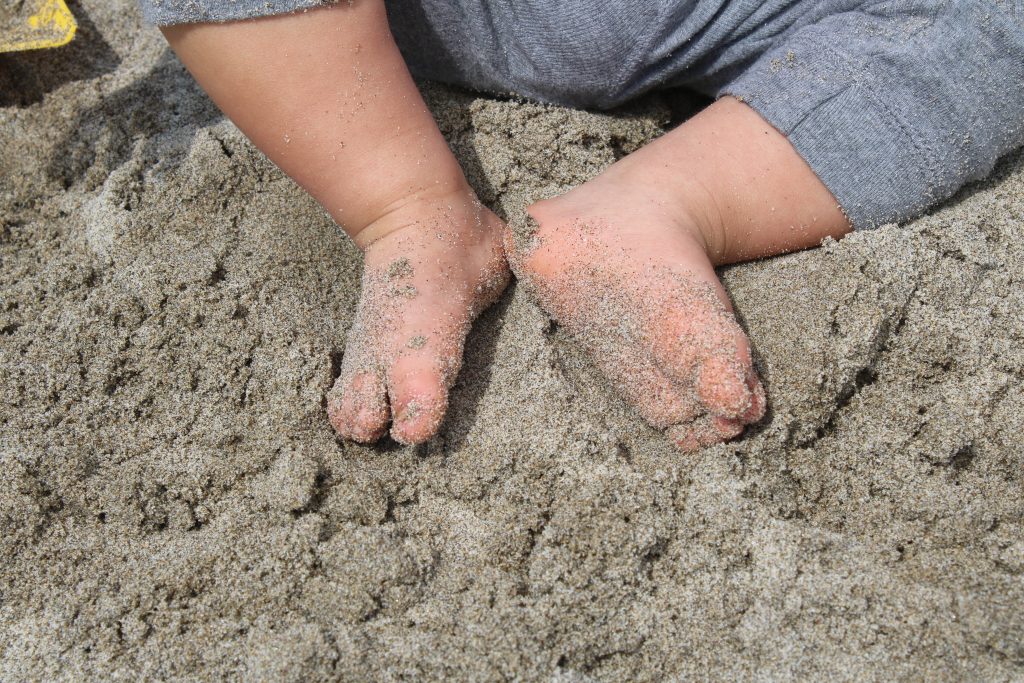 Usually I would work out on Saturdays, and if we were on vacation somewhere I’d figure out a way to get in a workout. Either I’d go for a run or we’d go for a family hike–something. But this time I decided to take it easy. I’ve been feeling like I needed a break lately. My body has been hurting in weird ways and I’ve been feeling burned out. I haven’t been doing anything super extra-strenuous, but I’ve just been feeling like my muscles aren’t recovering like they should. So I took an extra rest day and the only “exercise” I got was hauling crap to and from the beach. 😉 It was kinda nice!!! The rest of the day was very relaxing. Instead of our usual go-go-go, we just chilled. Stu and Christ stayed at the beach for awhile and we hung out at the house while Logan took a nap. Michael made us lunch and we sat on the deck in the sunshine, listening to music and the ocean waves in the distance. i read my book a little bit, I took a nap. It was divine. A few hours later they came back and we hung out for a bit and then I took Bella to the beach, just us girls, for a little while. It was nice to hang out and just run around on the beach with my dog. 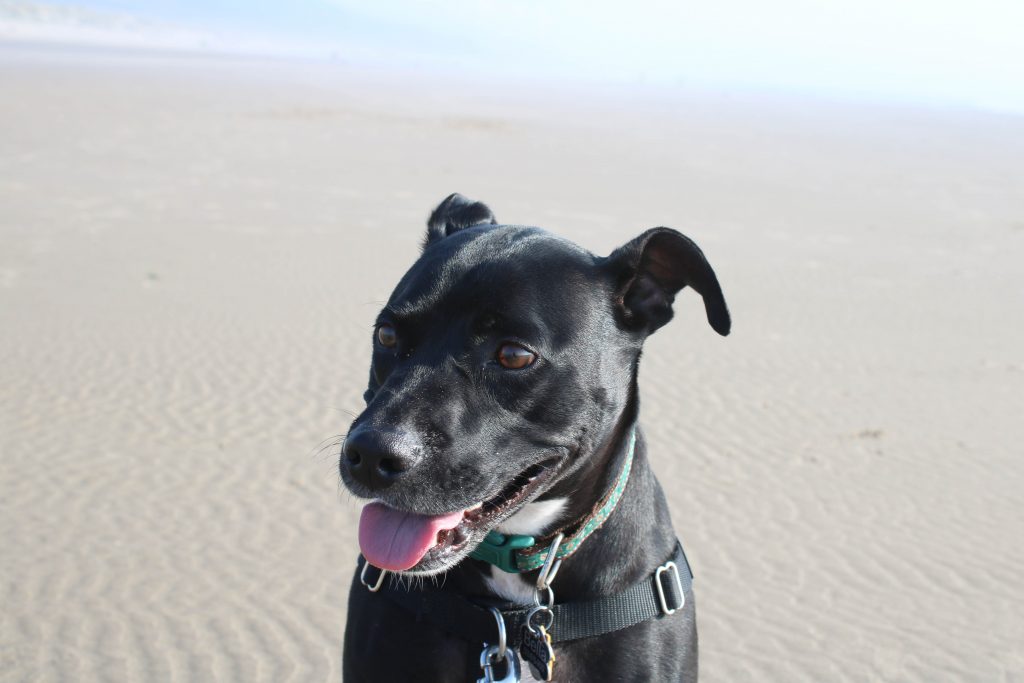 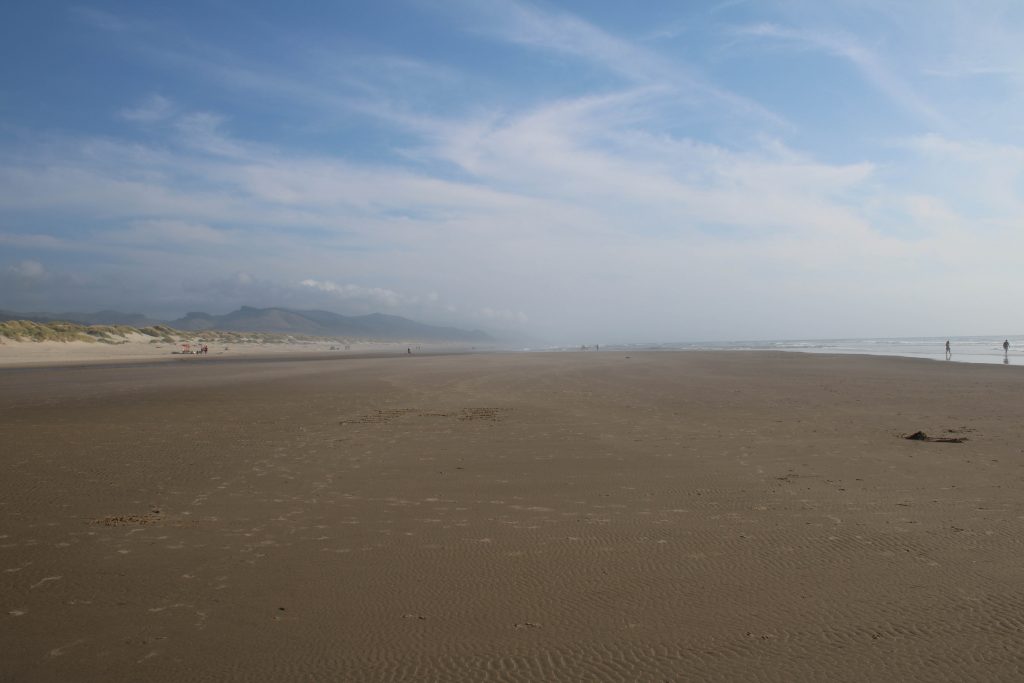 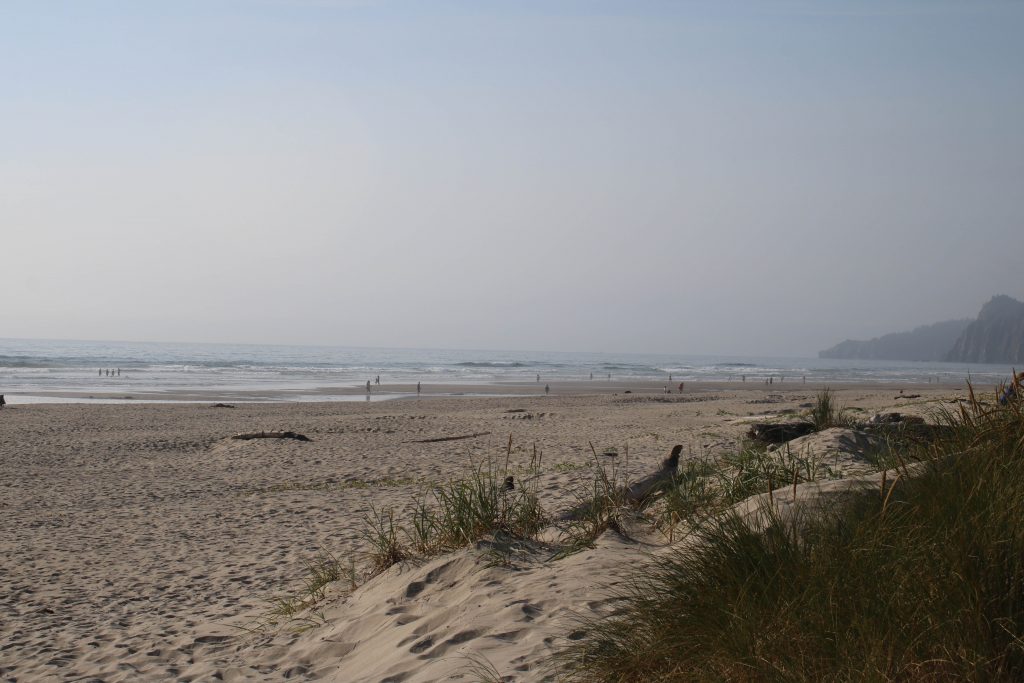 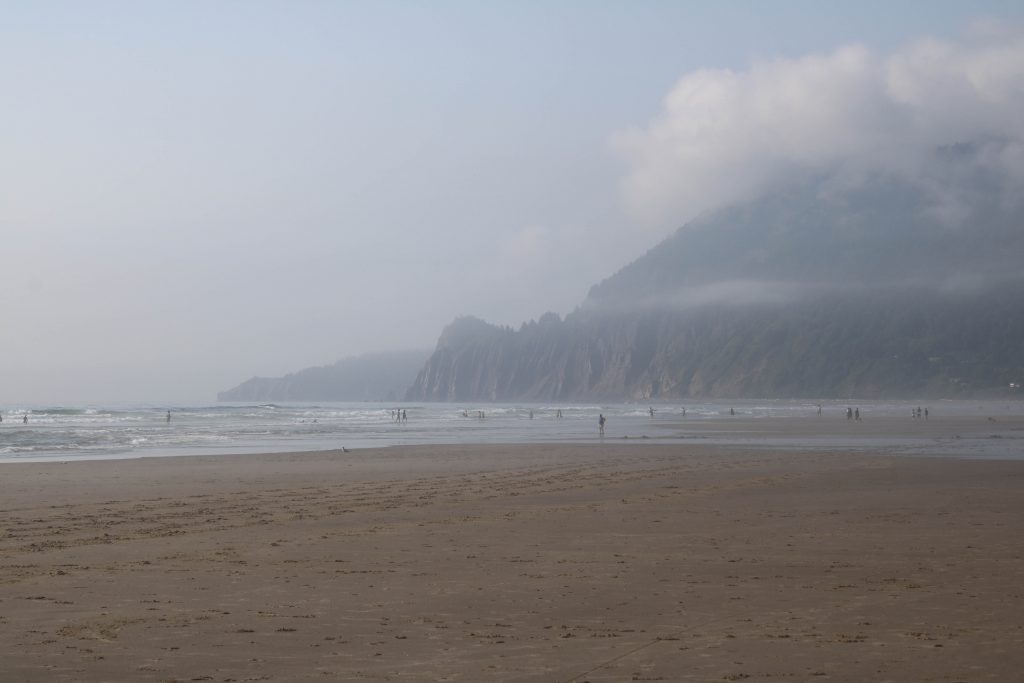 The morning had been overcast but kind of warm, and then the afternoon brought sunshine and the clouds burned off. It was actually fairly warm for the beach. We grilled outside again for dinner. Michael and Stu went to the store and picked up dinner. We did some local Bratwursts and grilled up zucchini and had leftover potatoes from the night before. 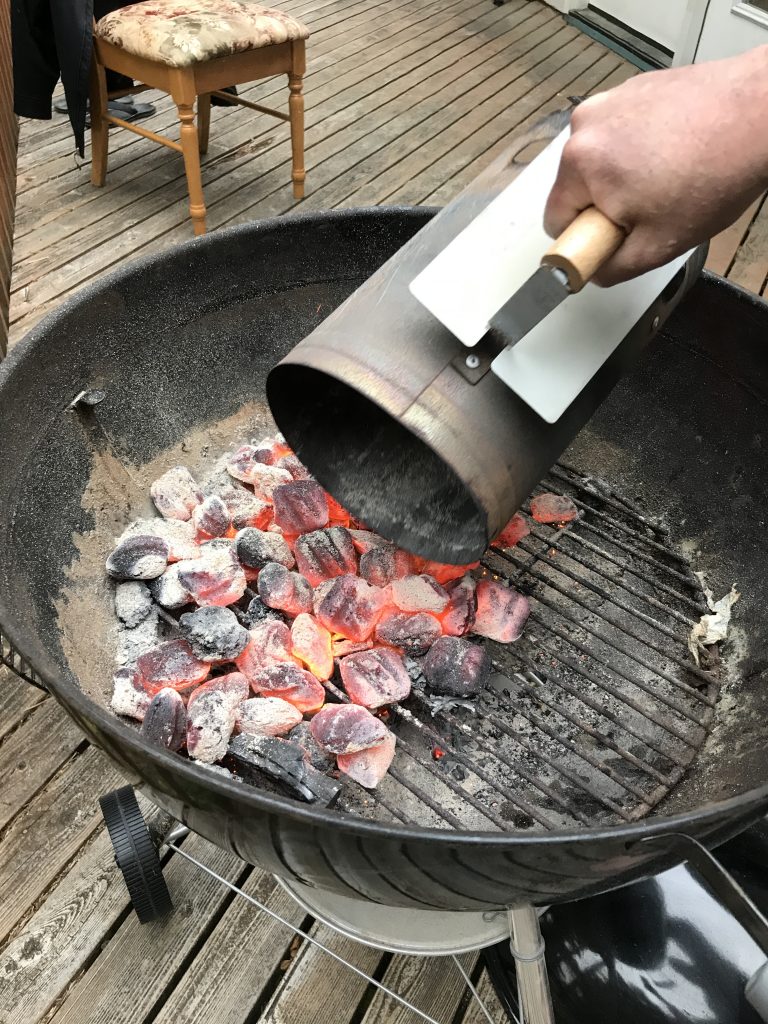 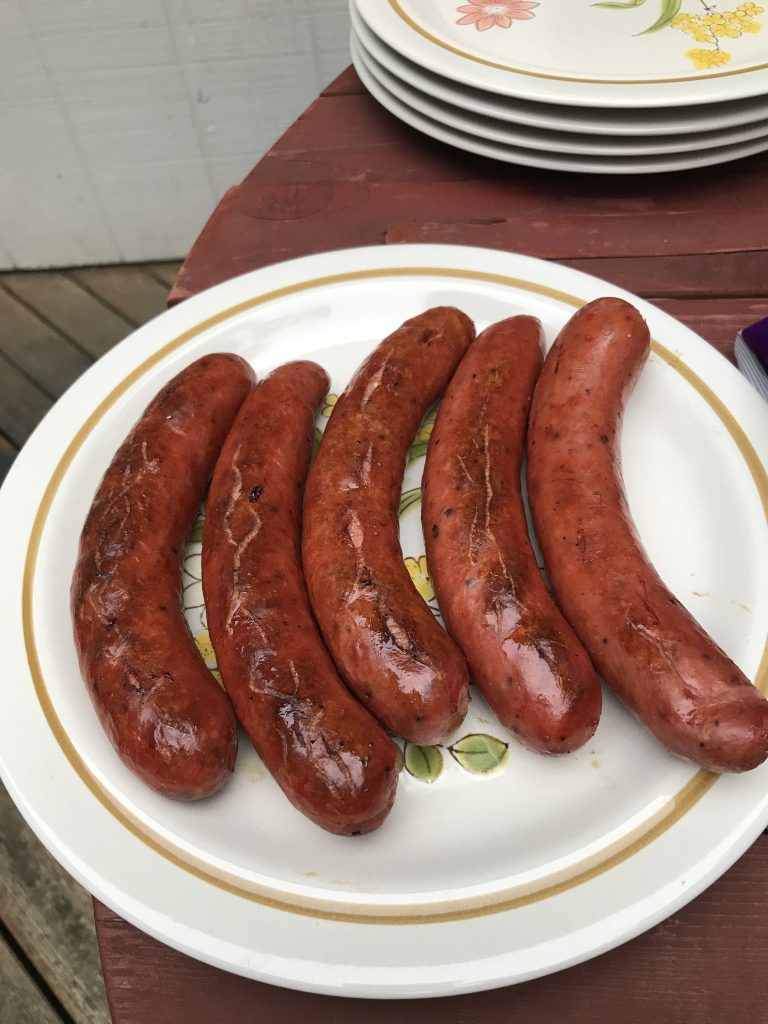 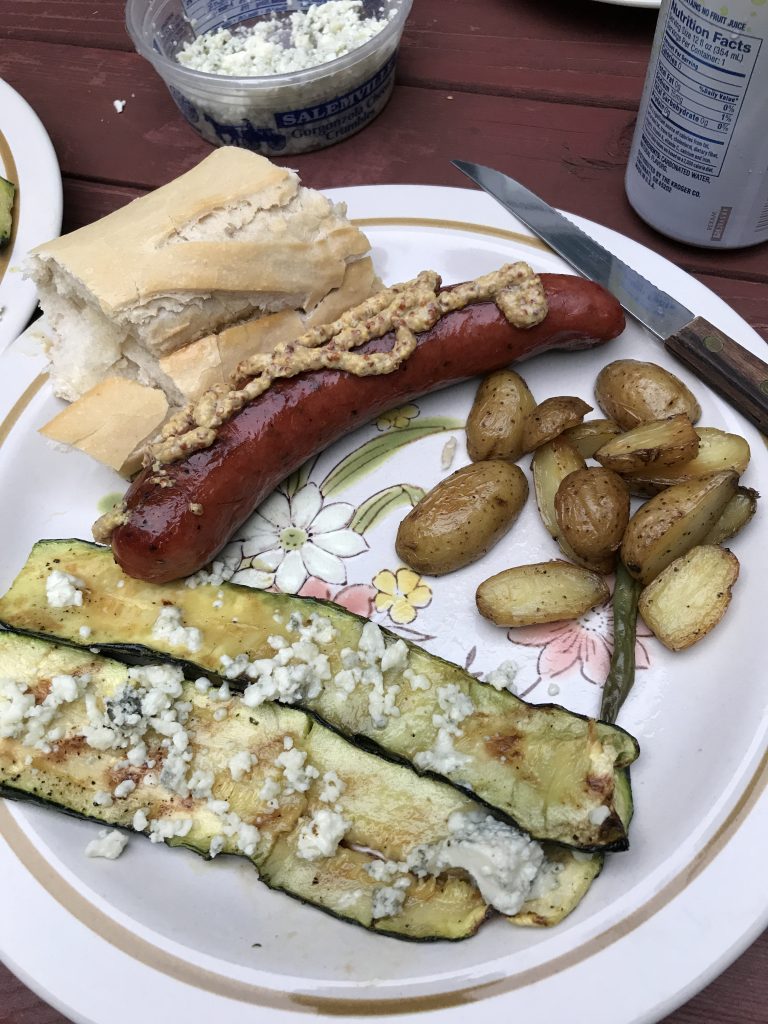 It was really delicious! Then we stayed up for a few hours playing cards and finally it was time for bed (for Michael and me) because we knew Logan would be up early Sunday!