Over the Hills and Through The Woods 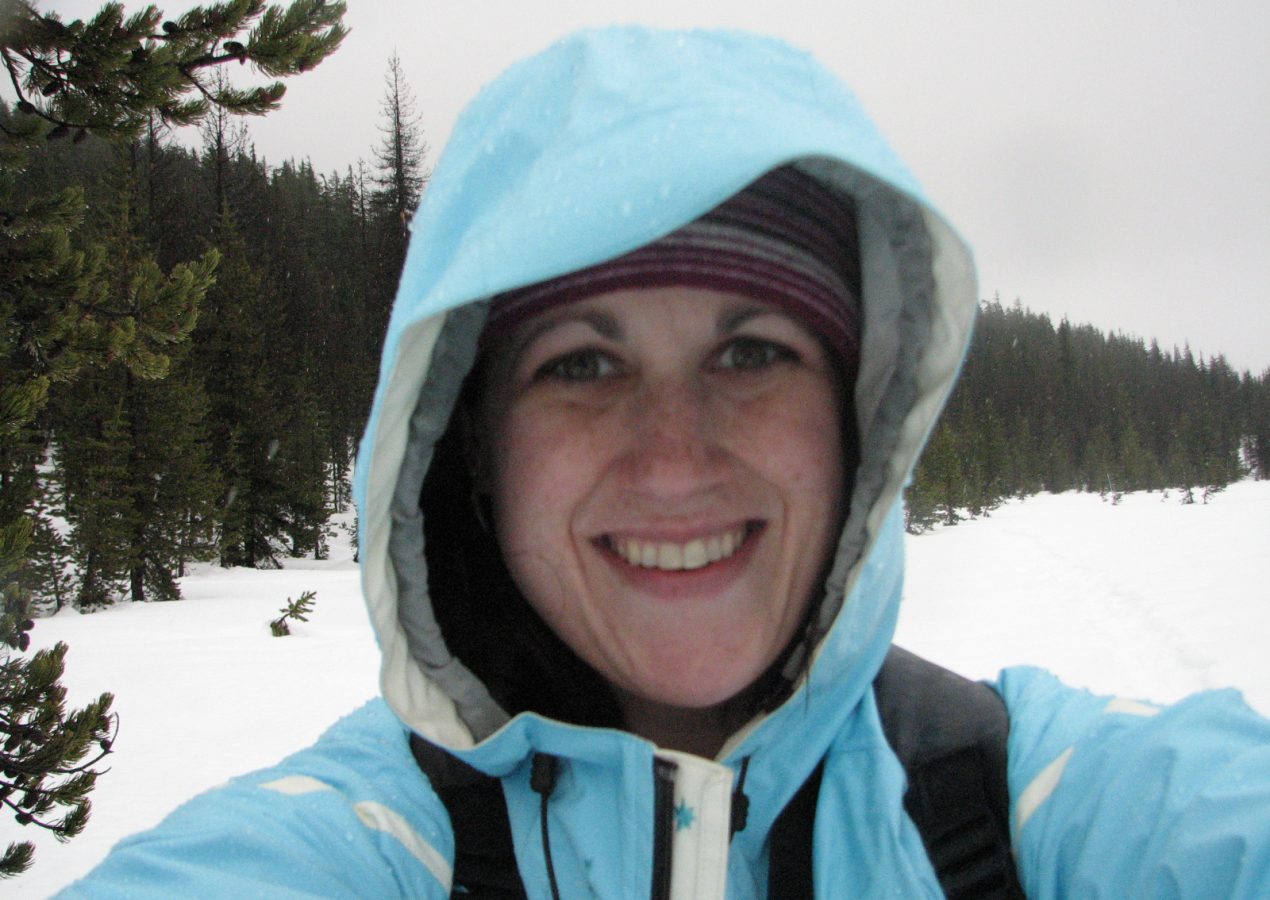 No we didn’t go to Grandma’s house…but we did do the next best thing: PLAY IN THE SNOW! 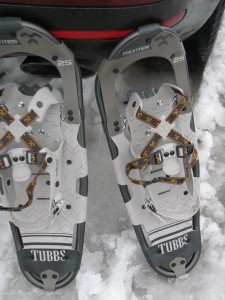 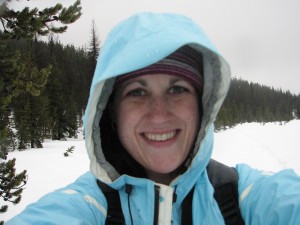 Saturday morning Michael and I woke up early and drove over Mt. Hood Pass to Eastern Oregon where we spent the weekend in Bend. The snow was mostly gone from the roads over the pass. Quite a different experience than 2 weeks ago when we snowshoed up there in the Winter Wonderland.

Bend is one of our new favorite vacation spots because it’s such a cool place for people into fitness. In the winter there is snowshoeing, skiing and because the weather is so nice there–often cycling! In the summer it’s the perfect place for cycling, hiking and other fun outdoor activities. 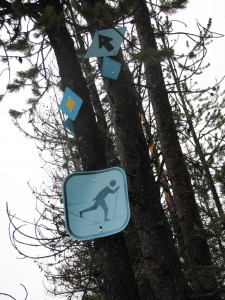 Bend is in the high desert. I love the red rocks. One of these days we’ll make it there in the summertime and take our bikes. We arrived in Bend and had a few hours before we could check into our hotel so we ate leftover pizza in the car for lunch. Then we continued up to Mt. Bachelor, did the awkward changing into snow-gear in the car and then took our BRAND NEW snowshoes out for a spin! 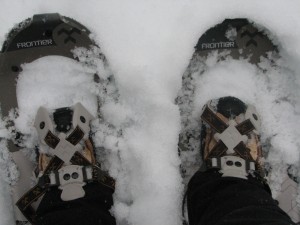 Michael bought snowshoes for himself and as a birthday present to me! I love them! 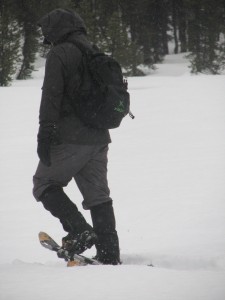 A coworker had recommended a few different snow trails so Saturday we tried Dutchman’s Flats first. It was much less crowded than the others we drove by.  The weather definitely did not cooperate with us this weekend. It was pretty rainy the whole time. I’d hoped if we got up high enough on the mountain it would turn to snow but it was too warm all weekend for that (almost 50 degrees). 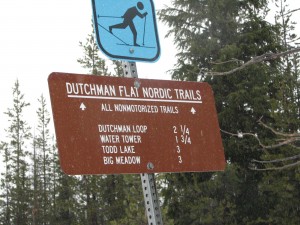 We had a great time. The snowshoes made such a huge difference! They are so much better than the crappy rentals we had a few weeks ago. Luckily we had good rain gear so the rain didn’t bother us at all. We trekked through the snow up the hills and then down across the open valley. 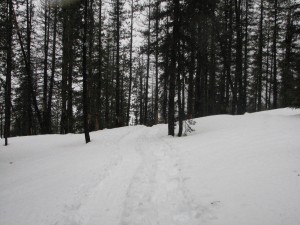 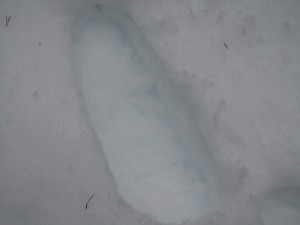 We planned on renting some poles once we got to Bend but we decided to give it a try without poles first. The poles really weren’t needed honestly. So we decided not to rent them over the weekend. I think if we were really doing some heavy climbing the poles would be needed. Since both of us have broken body parts right now, we stuck to the flat trails. 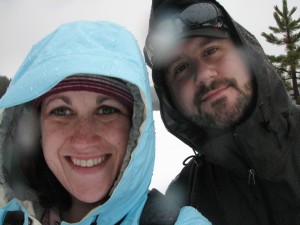 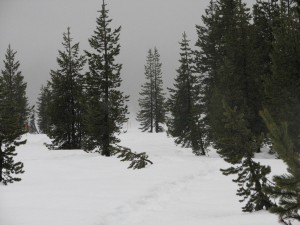 Check out the grey skies in the above photo. That was the mist and rain. It was a pretty cool view there. 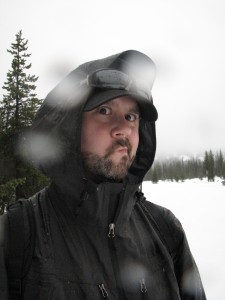 We went quite a ways before we decided to turn around. My snow pants were old and obviously no longer waterproof so I was starting to get uncomfortable. 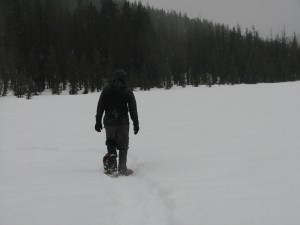 I had a great time but I was glad to get back to the car to strip off my drenched pants. Luckily my skin wasn’t too irritated and I wasn’t chafed too badly. My skin was red, cold, and clammy but once I got out of the wet clothes I felt better. 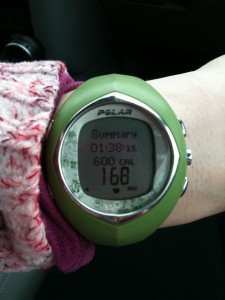 After we got changed we checked into our hotel room. I took a hot bath and then we hit the Outlet Mall for some shopping! I scored some great new clothes at the Columbia Outlet. I found some awesome new snow pants for $40! I also got a new jacket. 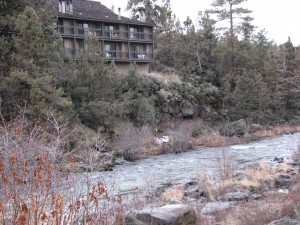 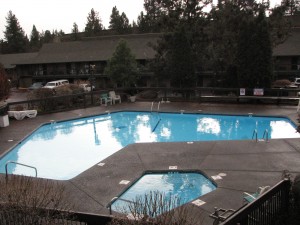 I liked where we stayed. The room was a bit small and dated. But the bed was comfortable enough and there was a mini fridge, microwave and a flat screen TV. It was fairly quiet and since it was right off the main highway through town it was easy to navigate around. 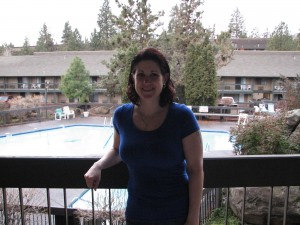 After shopping we went to downtown Bend to have dinner. Our first attempt was the Deschutes Brewery Pub there was a line out the door and an hour wait. Yikes! The iPhones came out and we found a place a few blocks away. 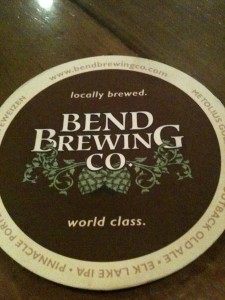 Dinner was at the Bend Brewing Company. We were seated immediately, which was nice compared to Deschutes. Michael ordered the jalapeno poppers as an appetizer but I didn’t like them very much.They had cheddar cheese in them instead of cream cheese. Weird… 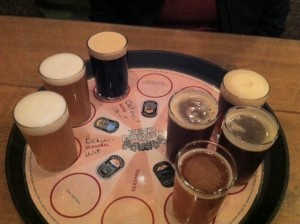 I also ordered a tray of beer samples. I skipped a few of them that I didn’t like but there were quite a few samples I really enjoyed. The High Desert Hefeweizen was tasty, so was the Elk Lake IPA. I didn’t like the espresso beer or the Porter. 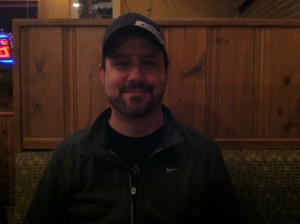 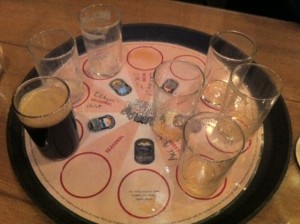 For dinner I ordered the grilled salmon with a marionberry reduction, rice and steamed veggies. It was a great, healthy alternative to the fried food I was craving. 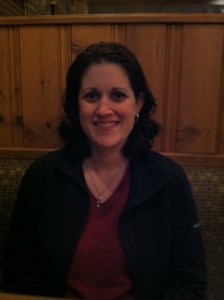 It was a really great start to my vacation! We got back to the hotel exhausted and kicked back in bed reading. It was relaxing and so needed after such an active day. We also had Star’s homemade fudge for dessert. Luckily the compression tights we both wore during snowshoeing prevented sore muscles the next day!

QUESTION: If you had a three day weekend, did you do anything special?