There’s something to be said to having a day off from work in the middle of the week. I had Thursday and Friday off last week for some fun summer events that we had planned. Wednesday night we went to a BBQ at a friends’ house and then Thursday morning we slept in to the glorious hour of 8am. Thursday was the Brewfest but Michael and I had plans to get in a bike ride that morning before heading downtown. 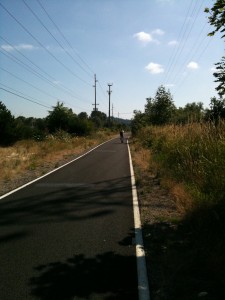 The best part about the bike ride: it was a Thursday morning so the streets were empty! We biked through the neighborhood to the Springwater Trail and headed East. The original plan was to head West through downtown but the sunshine east just looked so inviting we couldn’t pass it up. It was so worth it too–the Springwater was empty. The only people we saw were the serious cyclists and runners. None of the idiots that ignore the trail etiquette were there to clog it up! 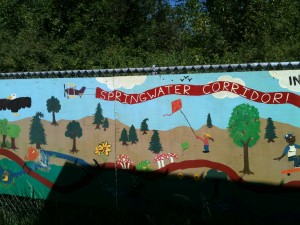 But let me back up a moment. There’s a pretty big hill I have to go up to in order to get to Johnson Creek and the Springwater. It usually kicks my butt–my heart rate spikes to the 180’s, my breathing is labored and I’m slow and methodical riding up that hill. This time my heart rate stayed steady in the high 160/low 170’s and I recovered quickly. I like that I can see recognizable progress on the bike. 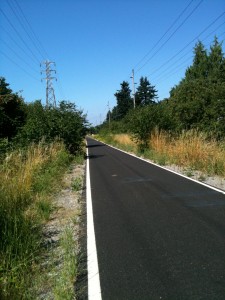 The day was warming up nicely too. I was wearing short sleeves and shorts and I was feeling really good on the bike. Not having to worry about the crowds of weekend people on the trail I was able to stop and admire the beautiful wildflowers that were decorating the entire trail. 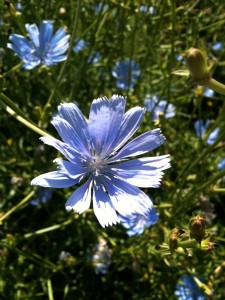 Wildflowers are one of my favorite flowers (next to lilies) and there were so many different variations on the Springwater. 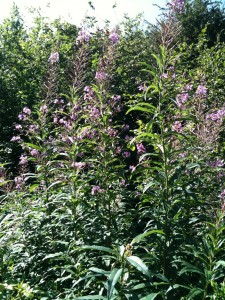 I stopped to take a bunch of photos a long the way. It was pretty much the perfect summer day. 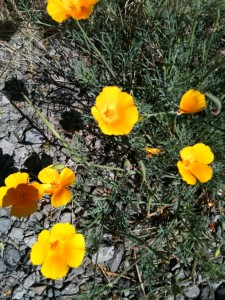 The plan was to bike 20 miles. Once we were out on “the open road” and we were both feeling pretty good we just kept going. Honestly, I was happy to be out there without the traffic and crowds and the weather was so nice I didn’t want the bike ride to end! 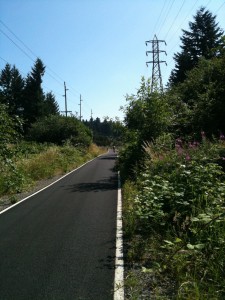 Pre-ride we’d had our normal breakfast (for me it was 2 scrambled eggs, a serving of black beans and 1 turkey sausage). There was enough time from when we ate to when we rode so I didn’t have any issues with my stomach while I was on the bike. Even tackling the big hill by the house wasn’t an issue. I took ice water and some GenUCan energy mixed in with water for the ride. 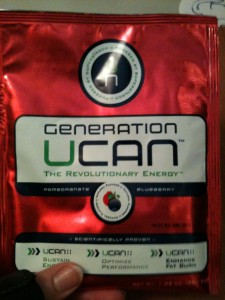 I brought some GUs with me but didn’t end up needing them at all. Breakfast plus the energy powder was sufficient. A few times on the ride my right knee had some twinges in it. I asked Michael if I was peddling too fast (something I often do and it can cause knee pain) and he said no. So I don’t know what was up with my body. My right wrist was also sore and I had to stretched it a lot during the ride. 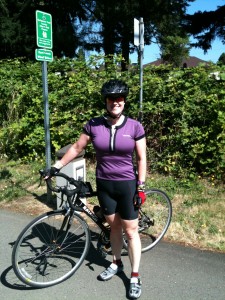 We rode out to the park in Gresham and then we decided to turn around. Neither of us wanted to turn around but the time was getting late in the morning and we had plans to meet friends at the Brewfest. We turned around and headed back to the house. 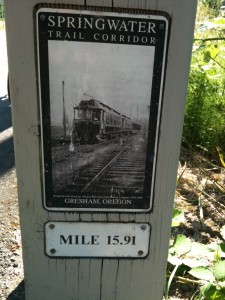 The ride home had no incidents–the trail was just as empty, the streets were empty, my body felt okay. 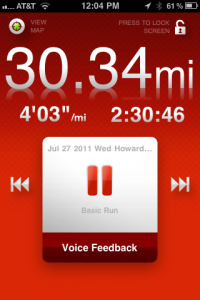 We arrived home with enough time to shower and change before heading downtown. It was a gorgeous day in Portland! The PERFECT day for a bike ride! And I have to say, training was much more enjoyable doing it on a Thursday when everyone else was at work. 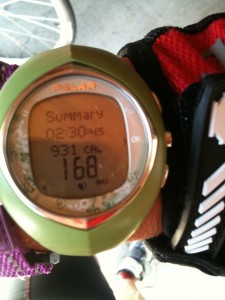 30 miles on the bike? Now that’s what I call a good way to start the vacation!

QUESTION: Do you find that your workouts are usually in “prime time”? How do you avoid the crowds?