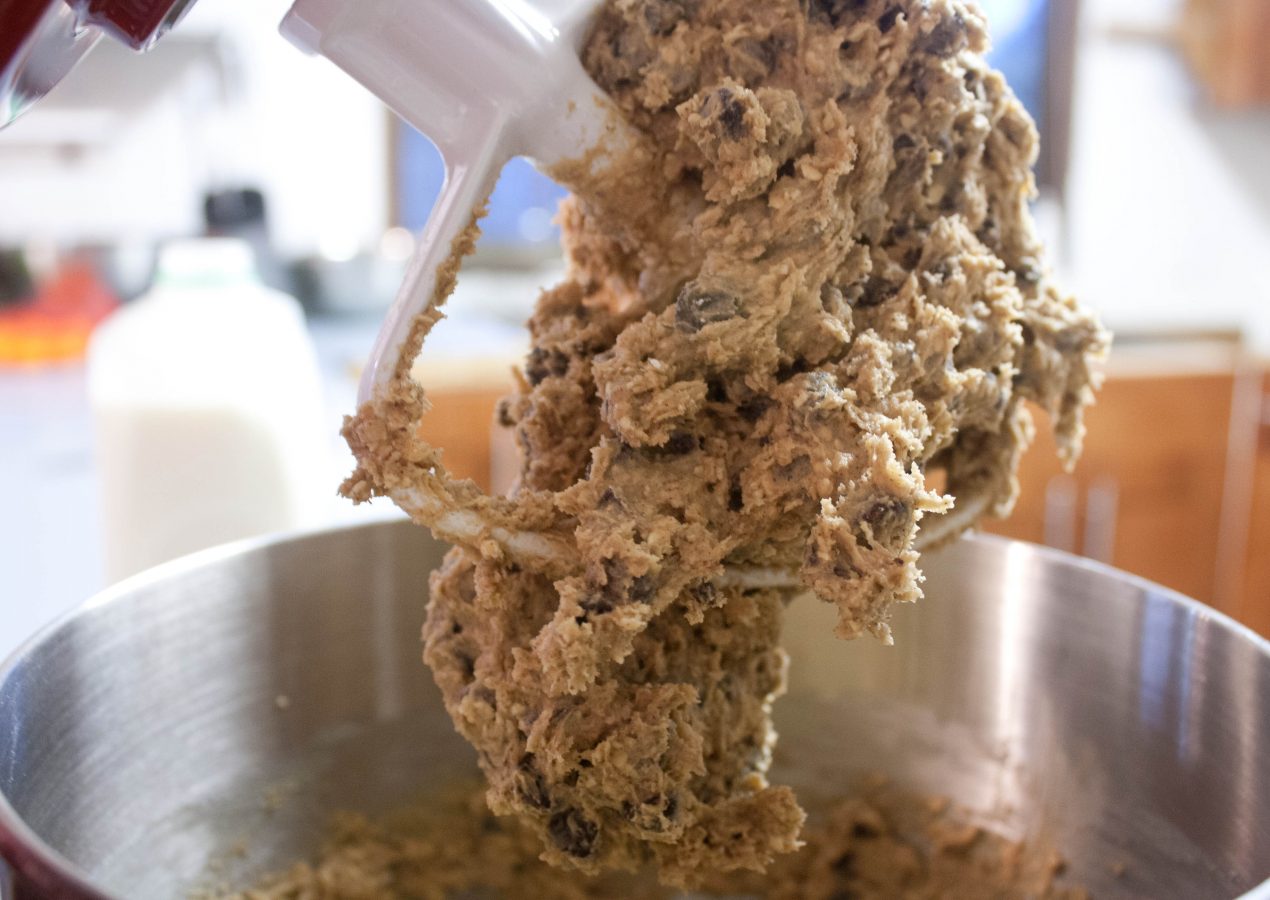 I was craving chocolate chip oatmeal cookies. I’d been craving them for probably months, but hadn’t gotten around to making them because I try not to have treats in my house like that. I can handle a half batch of this, a few candy bars here and there, but to bake some cookies and have them in the house taunting me is something I try to avoid.

The last cookies I made were the Valentine’s sugar cookies for Michael. Ever since then he’s been mentioning how much he wanted some cookies. One Saturday afternoon when the weather wasn’t great and we had no plans to speak of, I decided we’d bake some cookies together.

The only change I made to the recipe was substituting the Splenda/Sugar Blend instead of using straight sugar. I love using the blend. It saves on calories and doesn’t taste WEIRD like some sugar substitutes can taste.

If you haven’t tried baking with the Splenda/Sugar Blend, give it a try. I’ve been using it for years and no one can tell the difference. In fact, Michael was helping me make the cookies and he said “eeew don’t use that.” I kindly informed him that he hadn’t noticed the difference in anything else I’d made and he said okay. 🙂

This was the first time I tried to make cookies in the Kitchenaid Mixer. It went smoothly most of the time, then when the dough got really heavy (after I added the flour, oats and chocolate chips) it started to rock a little bit. I had to stop it a few times to scrape the dough off the spinner. I also scraped inside the bowl with a spoon to make sure it was mixing everything (it missed some spots). But all in all, using the mixer was pretty easy.

While it was mixing I did have to add a few tablespoons of milk because the dough was dry and crumbly. It got to the desired texture and I let it sit in the fridge for a few hours while we had dinner. The dough was easy to work with and tasted just right!

Using the Splenda Blend saved about 20 calories per cookie. As for the cinnamon…I’ve always added cinnamon to my recipes even if the recipe didn’t call for it because I think a dash of cinnamon adds something to cookies. When I read how much cinnamon was used in THIS recipe I did a double take. It seemed like a lot but….it worked. It was delicious.

When it was time for dessert, I baked just enough cookies for us to have that evening and saved the rest. I crossed my fingers that the dough would keep for a little bit because I didn’t want to bake the entire batch that evening.

The cookies were plump and sweet. I could taste the cinnamon and it was delicious, not overpowering. Cookies fresh out of the oven are the best!

Taking The Long Way ‘Round