On my actual birthday, Sunday, we got up and went to breakfast first at The Wildflower Grill. Ironically it was on our list to good restaurants to try and we discovered that as part of the Groupon deal we got a voucher for breakfast there! It was pretty crowded when we got there but didn’t have to wait too long for a table. I was slightly disappointed that we got a table in the front restaurant as opposed to the enclosed patio overlooking the trees and a creek–but I was hungry and not gonna complain! 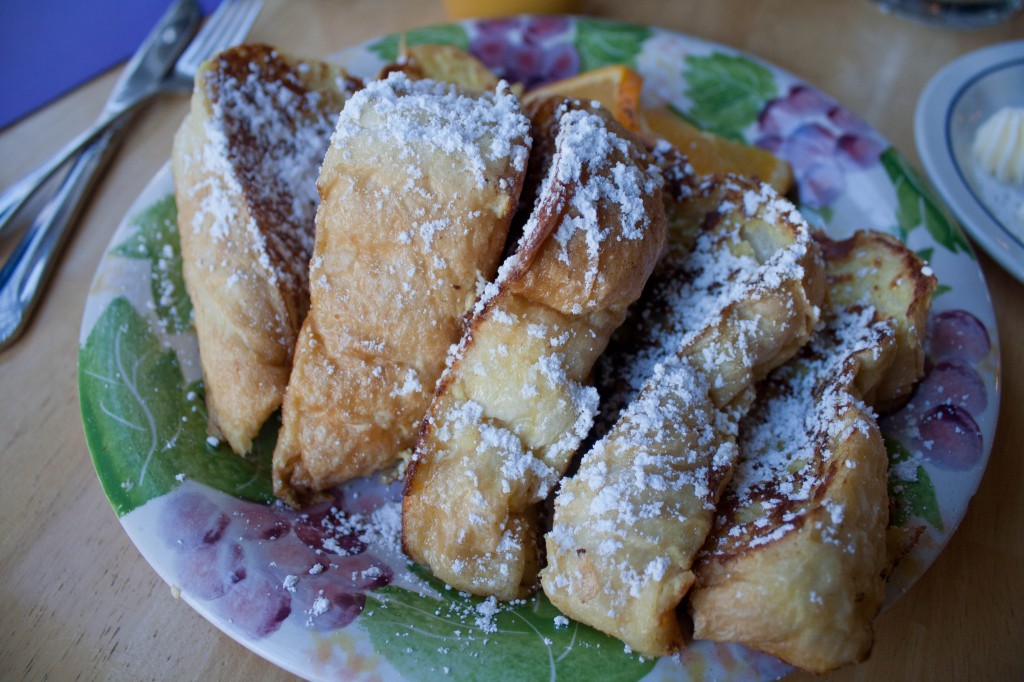 I splurged and got the French Toast. Yes, it was as big as it looks in that picture. There were six slices of thick, airy, fluffy pieces of bread dusted with powdered sugar. I ate about three of them and called it good. Man was I stuffed! Totally worth the splurge, though. (I ended up skipping lunch, too.) The service was good even though they were all harried and busy and the prices were about average. Some dishes were on the high side ($15) but my French Toast was humongous and only $8. 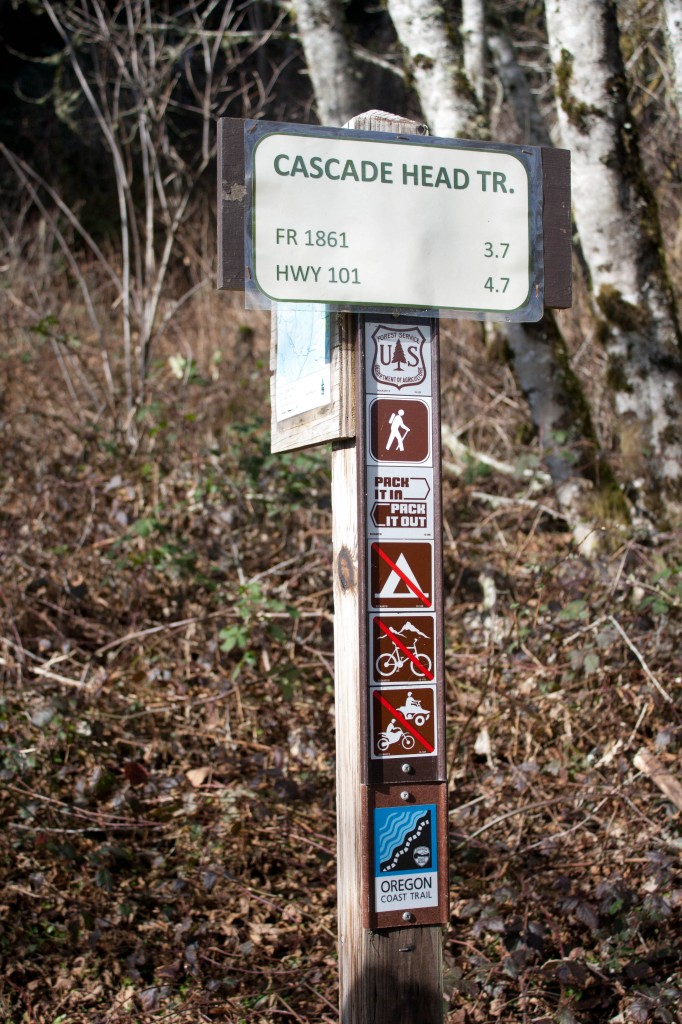 After breakfast we went on a short hike at Cascade Head Trail. It was longer than what we wanted to do so we just did about 2.28 miles total. (We’d tried to go on a hike around Devil’s Lake but couldn’t find the trailhead so we tried plan B.) 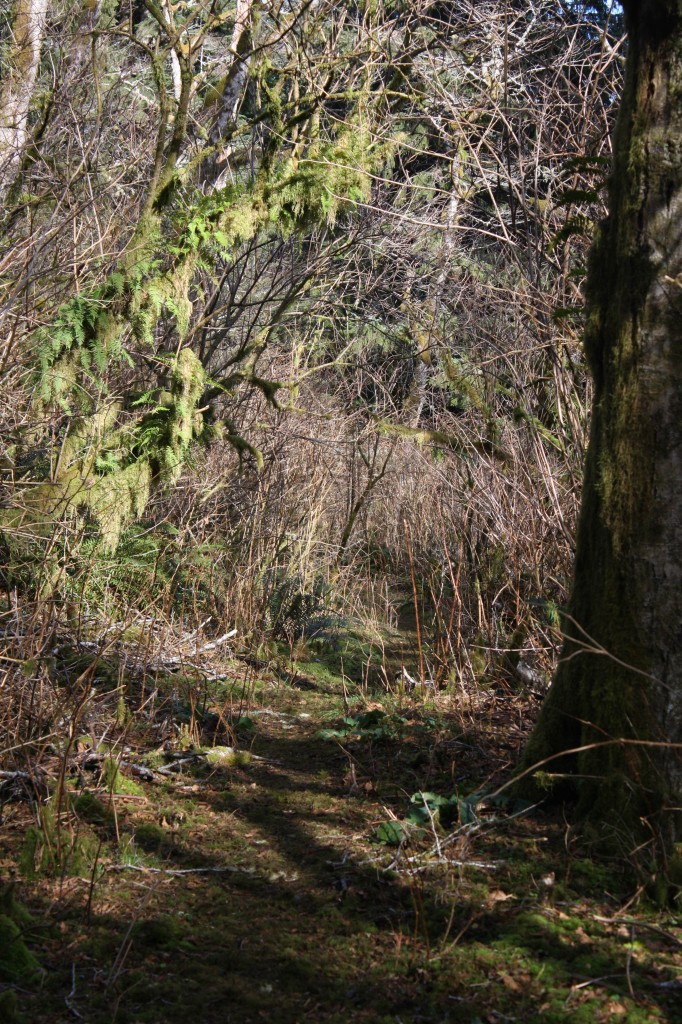 The trail was was pretty steep in the beginning and definitely got my heart pounding. We hiked through old growth forest on a very quiet, serene trail. 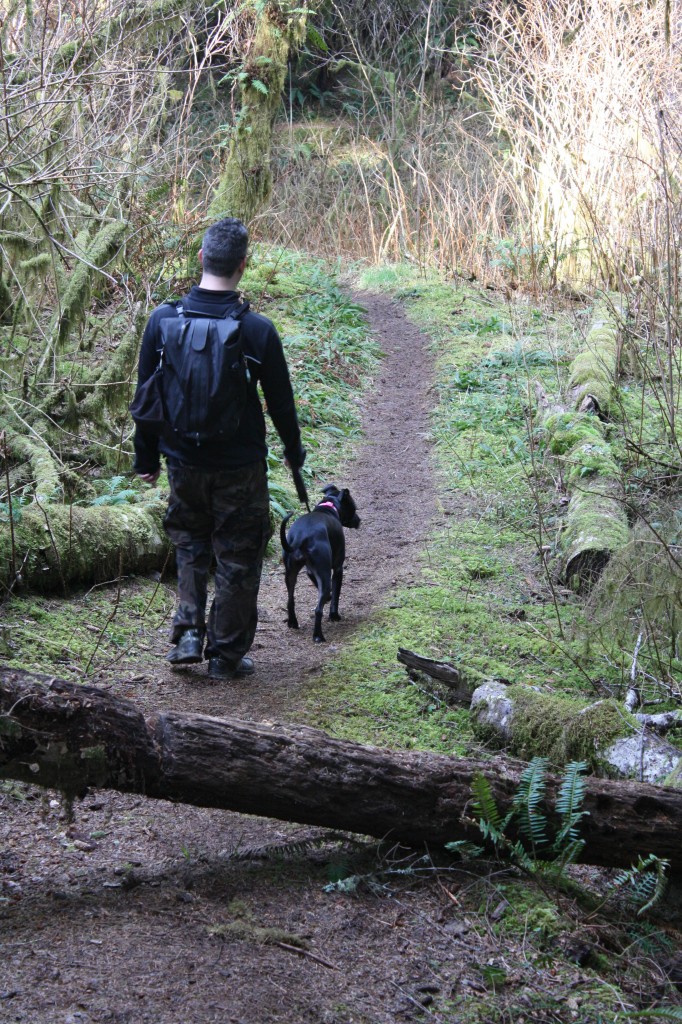 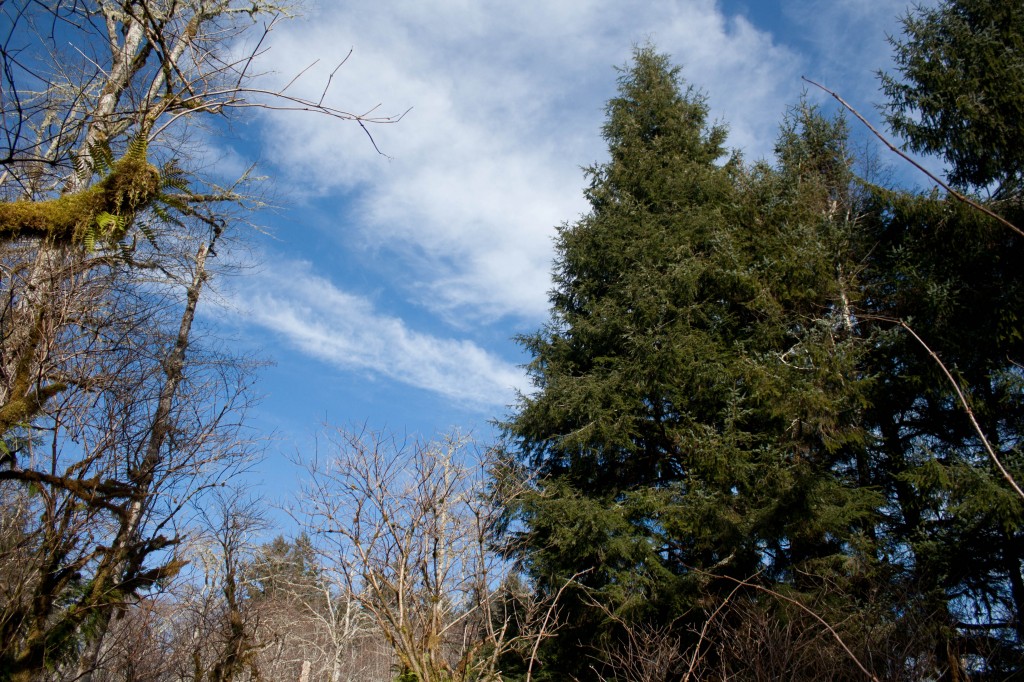 There were very old trees covered in dripping moss, ferns and mushrooms. The trail itself was very soft, covered in pine needles. We wandered around, winding through the woods and passed by several brooks. Bella did pretty well on the hike. Her paws seemed to be ok. 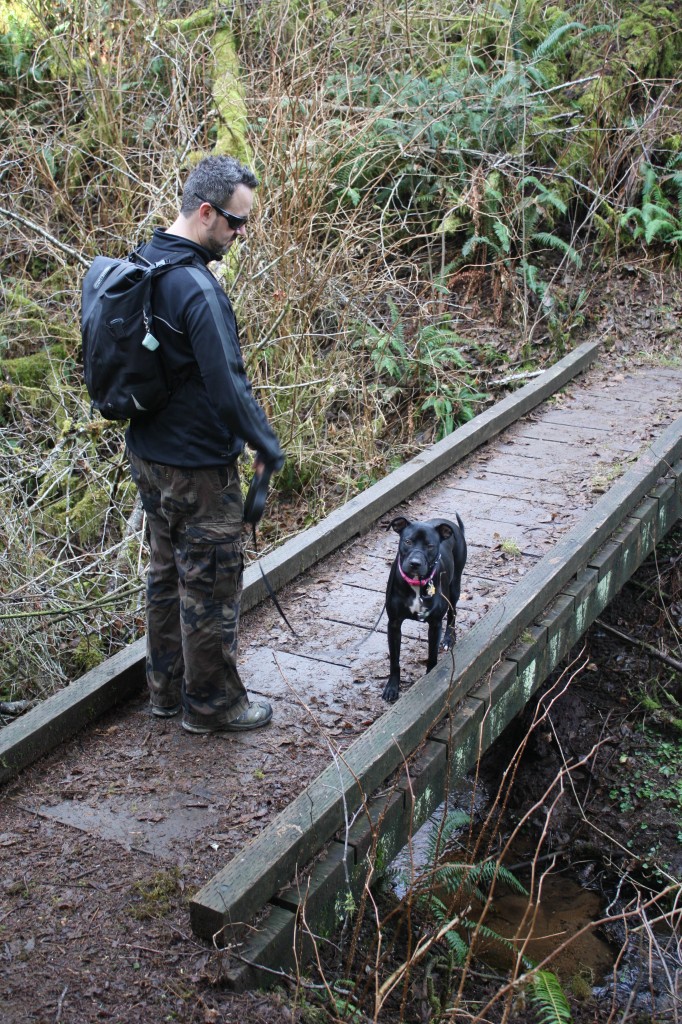 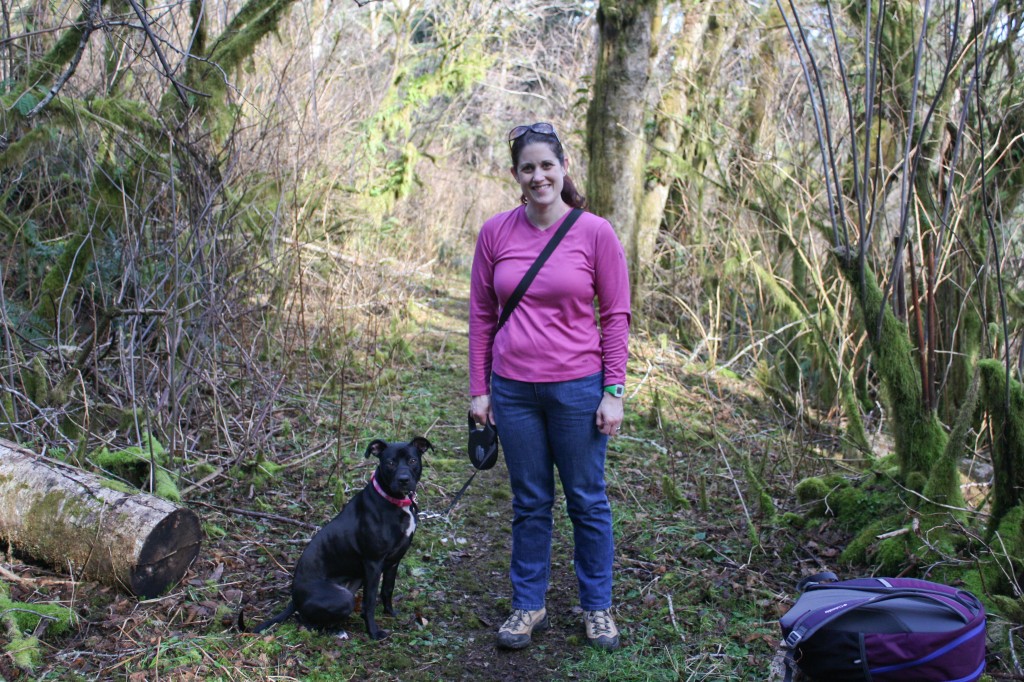 We didn’t see a single soul on the trail while we were out. It was kind of nice to just meander along in the woods. We stopped for water and then turned around to go back. It was still pretty steep up and down (how was it uphill both ways??) and honestly the last 1/2 mile or so was a little TOO steep for me and my creaky knees. 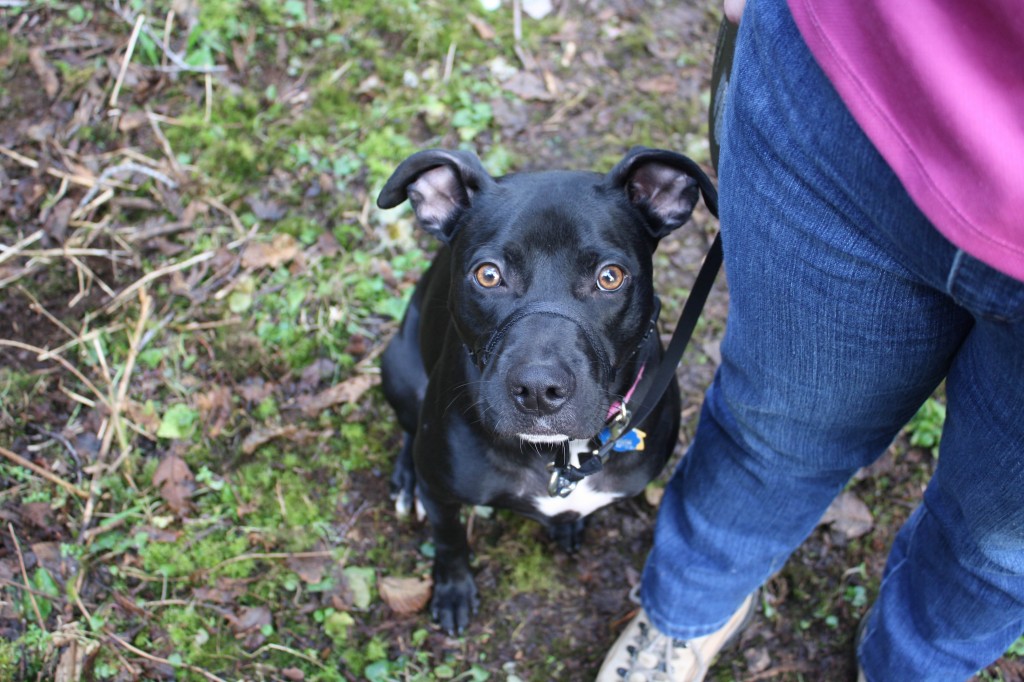 It would have been nice to be able to do the whole hike because there’s supposed to be some amazing views of the ocean at the end but it just wasn’t gonna happen. Besides, we had some amazing ocean views from our hotel room. Like this one: 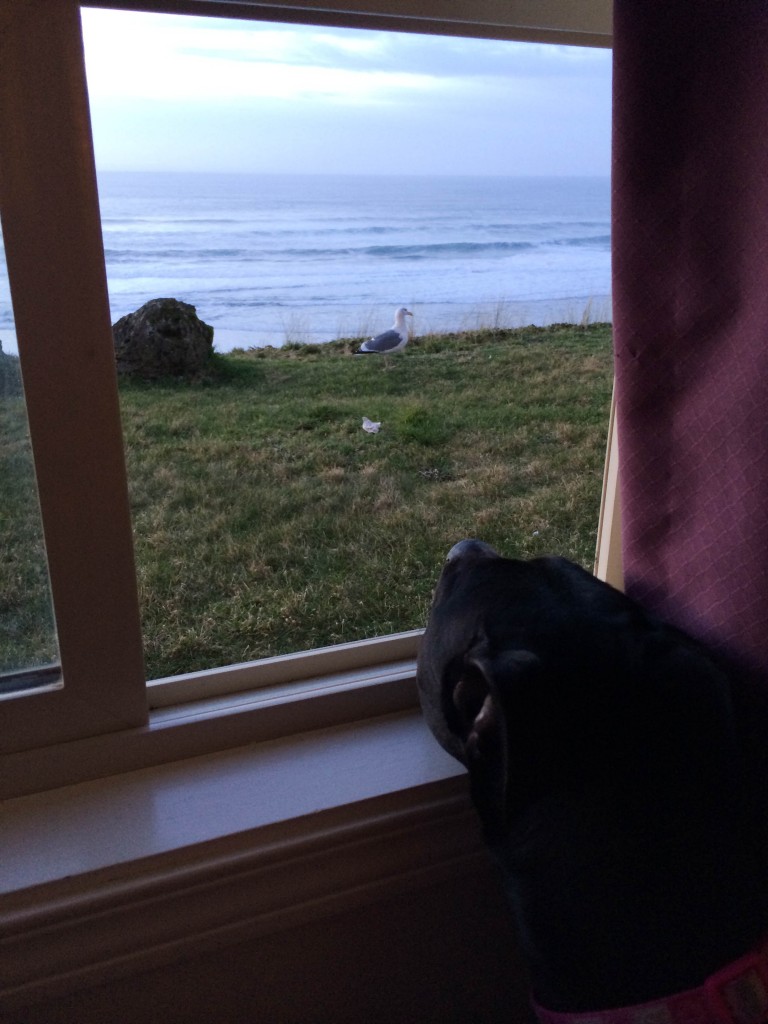 Hahaha! Anyways, a decent number for a short hike: 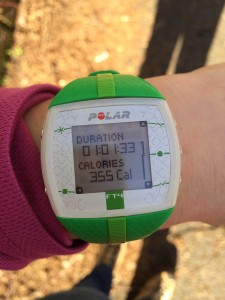 We went back to the beach and did another little short walk so Bella could get her sand-fix. She did the same thing she did the first day–rolling around like a crazy dog. After the beach we cleaned up and then went back to the casino to kill an hour or so before our dinner reservations. I got lucky again! I ended up quadrupling my money this time. Which was a super awesome birthday gift if I do say so myself…. 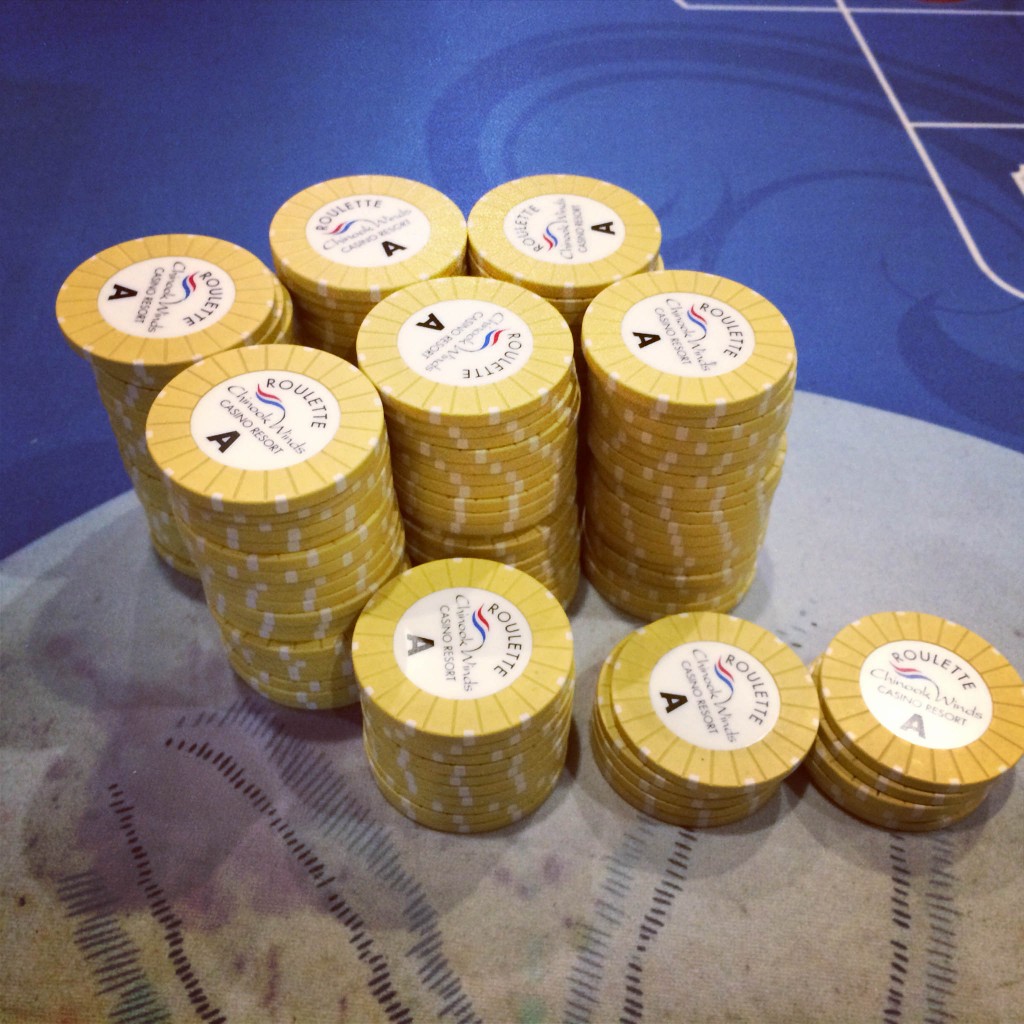 Our dinner reservations were for the Inn at Spanish Head. The hotel is perched up on a cliffside overlooking the ocean and the restaurant is on the top floor. It had amazing views. We got lucky and got to see the last part of the sunset before it got too dark. Our table was nice and quiet, right next to a window. It was pretty early for dinner (like 5:30) but we were tired and hungry so we got there early. We shared the crab and artichoke dip appetizer. It was pretty good, but then I usually love any kind of dip. 😉 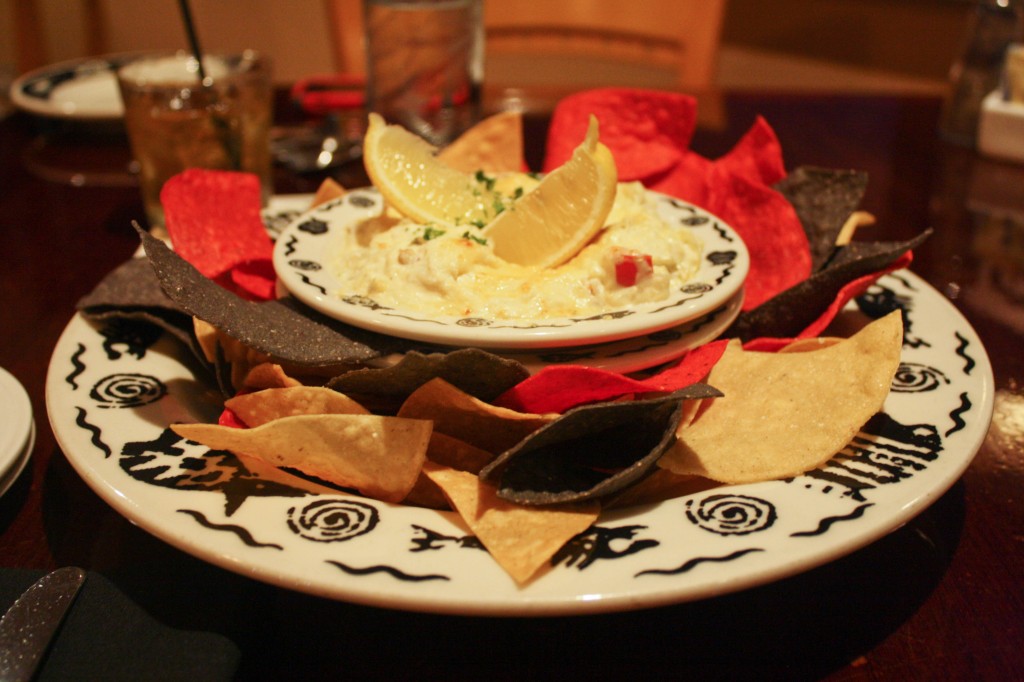 I had the seared scallops with mashed potatoes and vegetables. A green salad came out first. The salad was really good–the greens were super fresh and delicious. I loved my scallops. They were cooked in a leek, pancetta, white cream sauce (so good) and had steamed broccolini with it. The mashed potatoes were just ok. I’ve definitely had better. They were pretty dry. 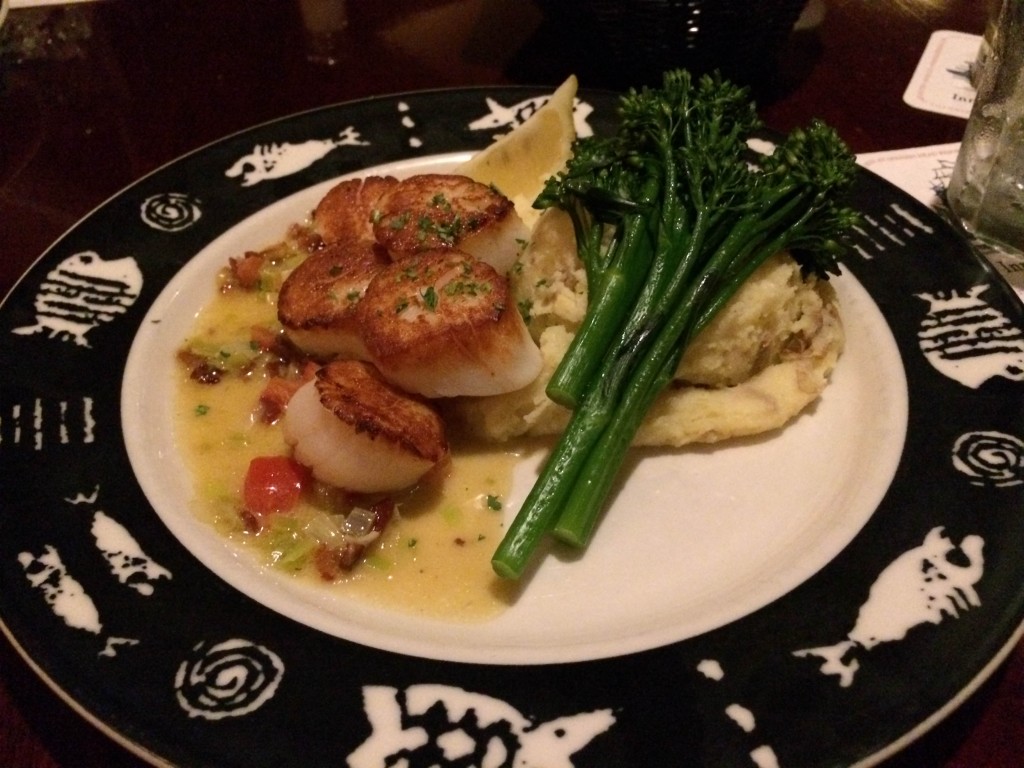 Michael got the steak and mashed potatoes. He loved his steak and the port sauce it had on it. Even though I don’t like mushrooms, I felt like the sauce needed them. So that was one thing they could have improved on. Overall we both enjoyed our dinners and thought it tasted good–even though it had room for improvement in some areas. 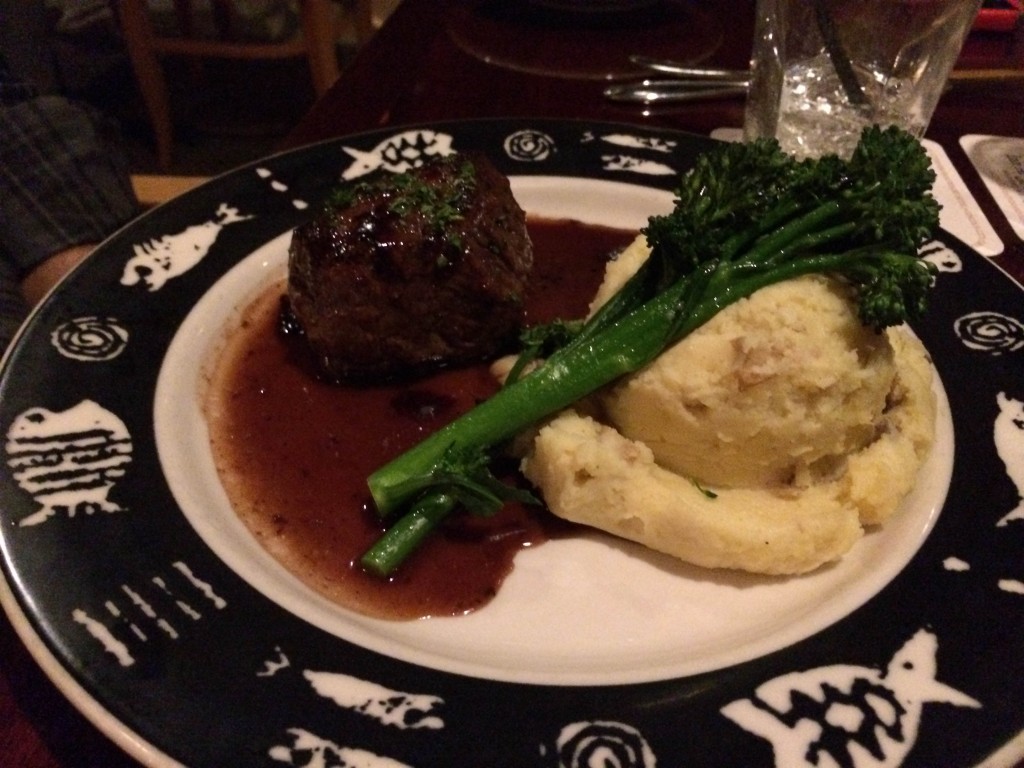 One thing that kind of irked me was the wine menu. The only wine they served by the glass was their own label–Spanish Head wine–I had a sample of two different kinds of their white wines and didn’t like either of them. They weren’t good and I was kind of annoyed that I couldn’t have a different label wine unless I ordered a bottle. So I had a vodka tonic instead. 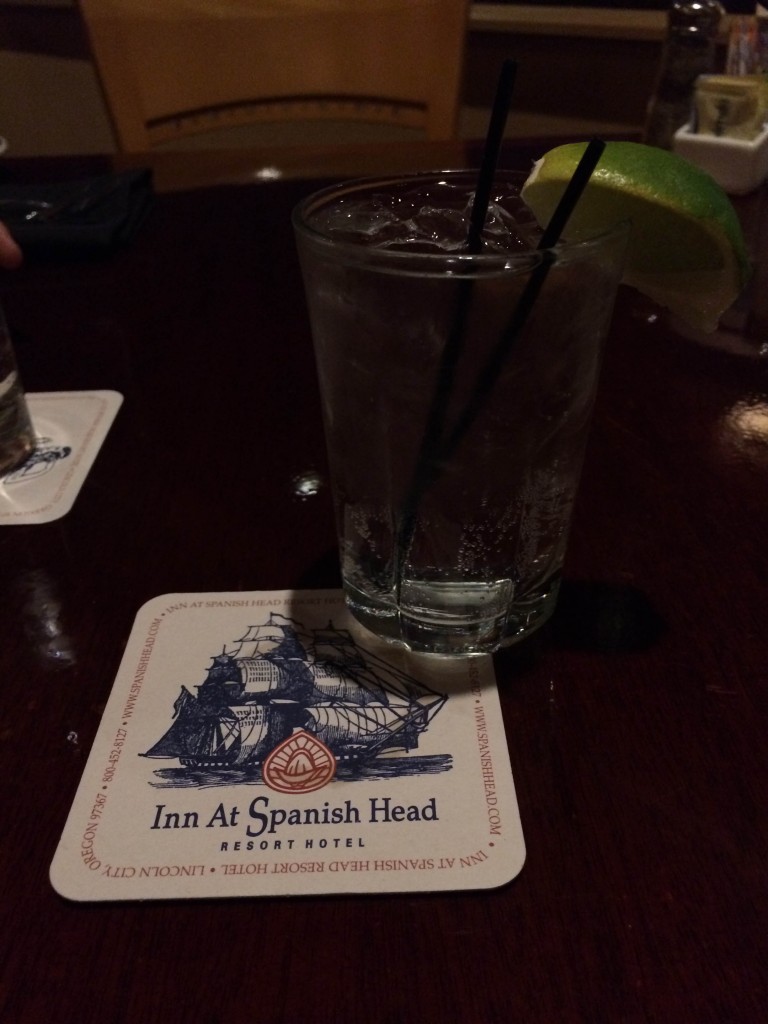 I kind of wanted some key lime pie for dessert but neither of us had ANY room for more food. We went back to the room to chill out. Bella passed out on the bed between us, snoring. She was tuckered out from the hike and the beach! I’ve never seen her that tired before. Poor thing. She slept all night without making a peep. The next morning we went for one final walk on the beach. 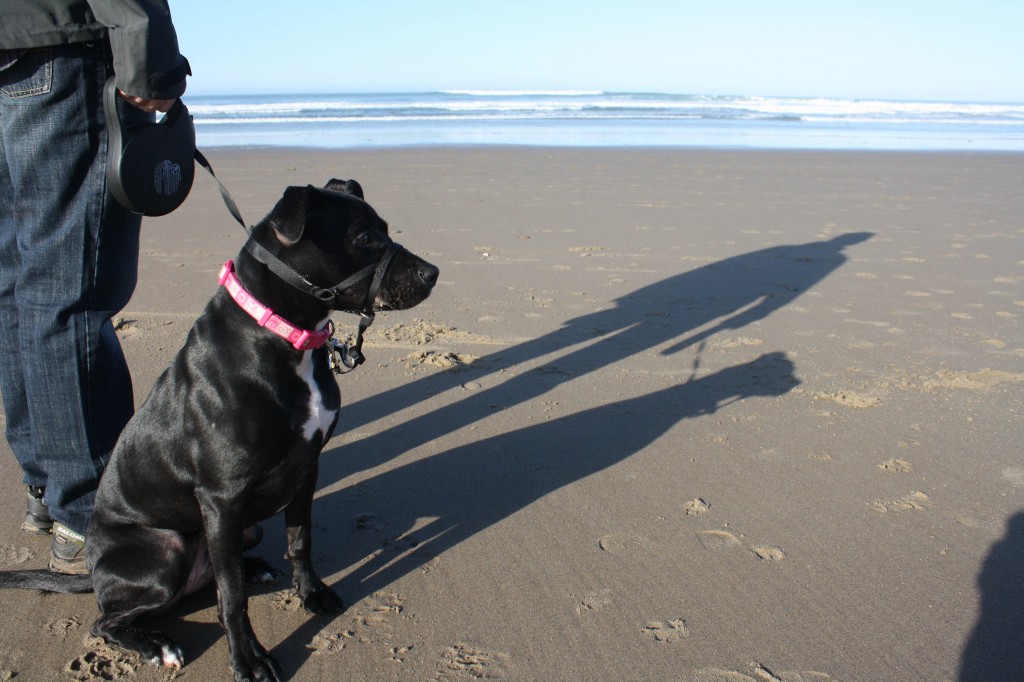 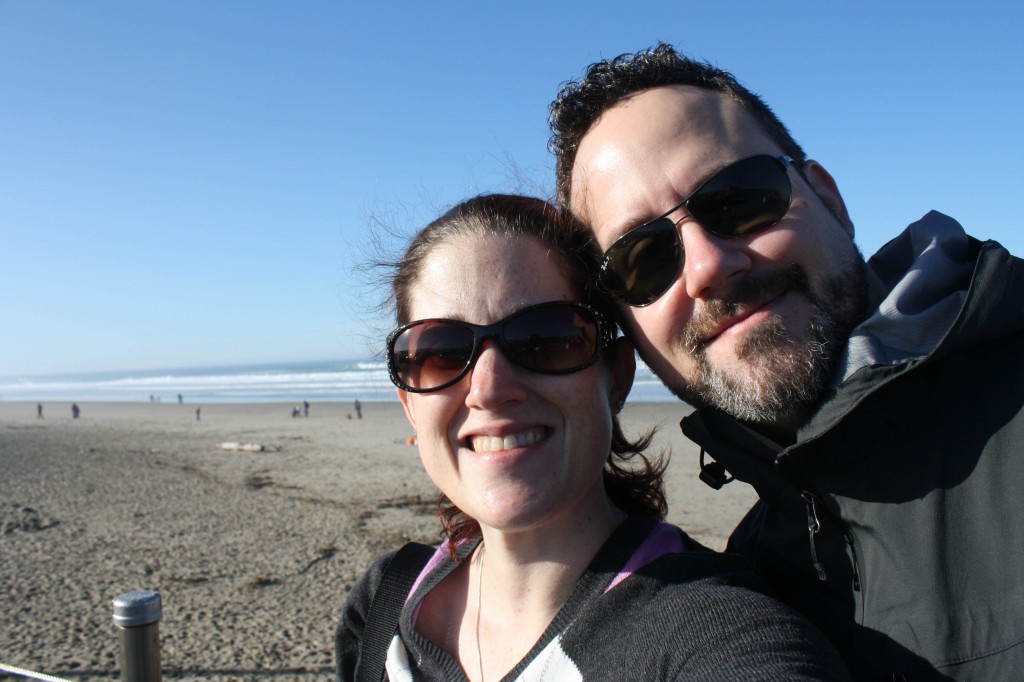 Of course our last day there was the warmest (no jacket needed)! Our walk on the beach was a short one and I grabbed breakfast to go on our way out of town. We stopped at Pirate Coffee Company. What a cute place. I got an English Toffee latte (it was great) and probably the best bagel I’ve ever had (I think it was homemade). I also got a souvenir–a new food dish for Bella. 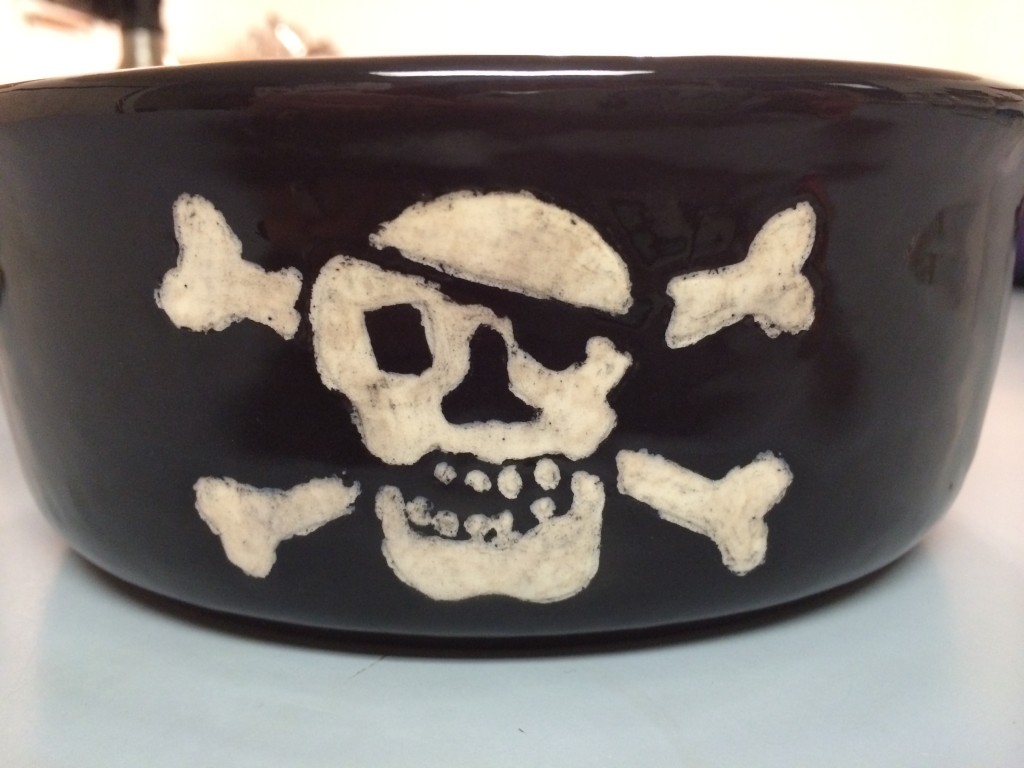 It was such a good trip. I hadn’t realized just how desperately I had needed to get out of town and kind of decompress. It was amazing watching Bella experience the beach for the first time. I got some pretty cute video of her. I’m happy that she loved it and we’re going to try and go back again soon.