Every year I’ve said I wanted to do the whole “go to a tree farm and cut your own tree down” thing. I never had this experience as a kid, and still haven’t done it as an adult. Well we finally did it! 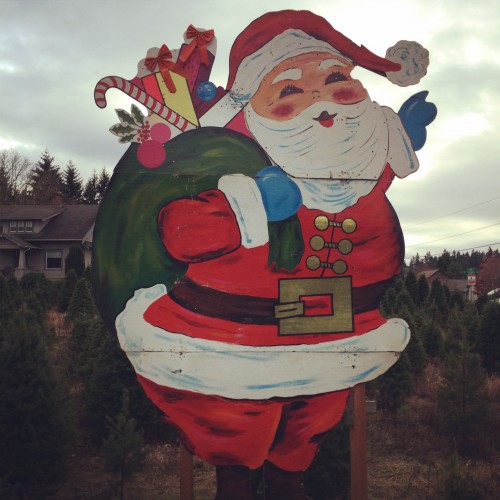 On Saturday there was a break in the rain and so we trekked over to the tree farm near our house. I’d seen the sign that said $20 ANY tree! U-Cut! Sign me up. We walked all over the tree farm to find the perfect tree. I tend to like the smaller trees (around my height or shorter) and Michael wanted a taller tree. I also tend to gravitate towards the derpy trees that no one else wants. (Same with animals: perusing rescue websites I always want to adopt the animal that is missing a leg or something.) 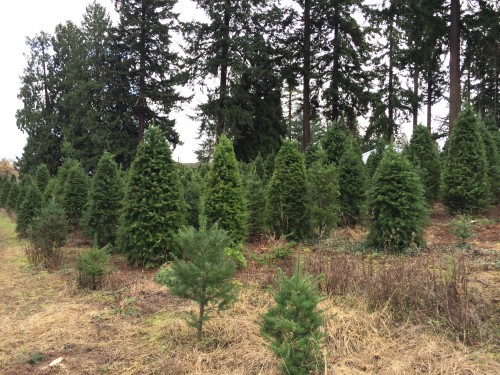 Anyways, we found half a dozen trees that seemed pretty good but kept looking. Then we got to the point where there were SO many options we had to just pick one. We picked one. 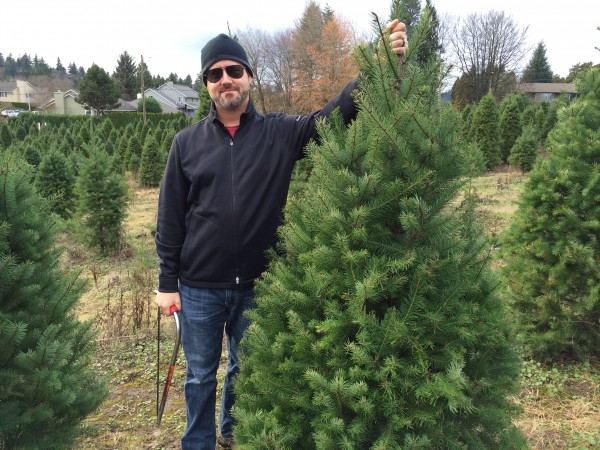 It was a happy medium sized tree that was fluffy and only had one bald spot. 🙂 Which was okay, that side of the tree would be against the wall. No one would know! 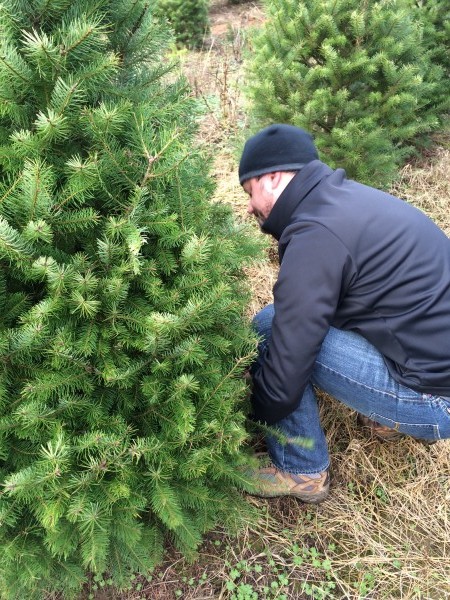 We took turns sawing the tree, but Michael did the bulk of it. It was a lot easier than I thought it would be and didn’t take too long to chop down. I carried it downhill (humble brag) with only one hand! Thank you Warrior Room!! 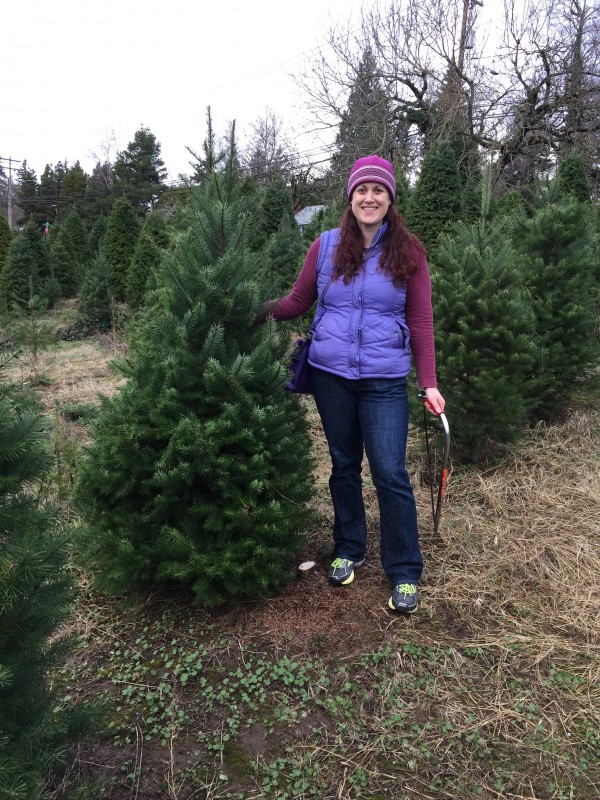 We got the tree home and trimmed the bottom, put it in the stand and spent the next hour putting the lights and ornaments on. I remember how much I HATE the light part. It’s my least favorite part of the Christmas tree experience. The ornaments? It’s the best part.  I had a few new ornaments to put on the tree, including one from my friend (more on that later). Bella supervised from the couch. Oddly enough the cats were nowhere to be seen. They are usually right underneath the tree the second it gets in the house. 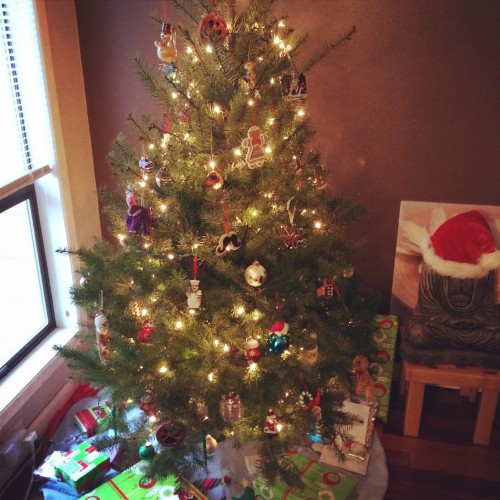 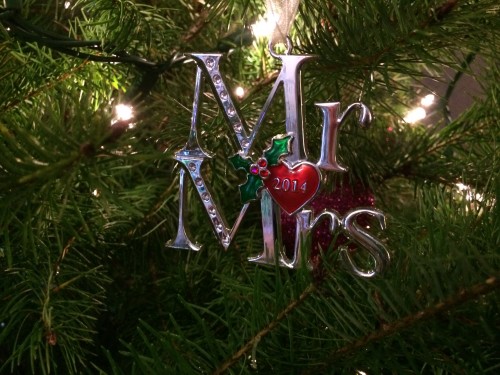 It was a good day!

The weekend didn’t stop there. I stopped in to the Eastside Distillery for a little Christmas shopping. I saw this new product and HAD to have a sample! They had samples of all their products in the bar. I tried the egg nog liqueur first. It was pretty good, really strong, but I didn’t think it was necessary. Get a jug of nog at the grocery story and spike it with your favorite booze and you have a great drink. The Peppermint Bark Liqueur however? That stuff was gold! It was AMAZING. It was a shot of chocolate peppermint goodness. It was so tasty and I almost bought a bottle. Almost. It was really expensive, sadly. 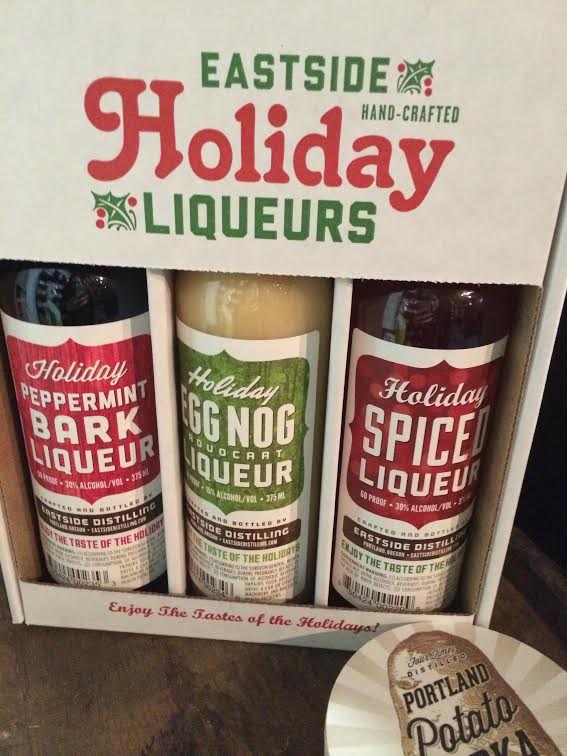 I also recently went to a new(ish) restaurant with my cousin Anna. I had a Groupon for the new Salvador Molly’s restaurant that opened in Sellwood. There used to be one on SE Belmont Street, a trendy area here in Portland. I’d been to that restaurant like a over a decade ago and I remembered liking it so when the Groupon came out I was excited to try it again. 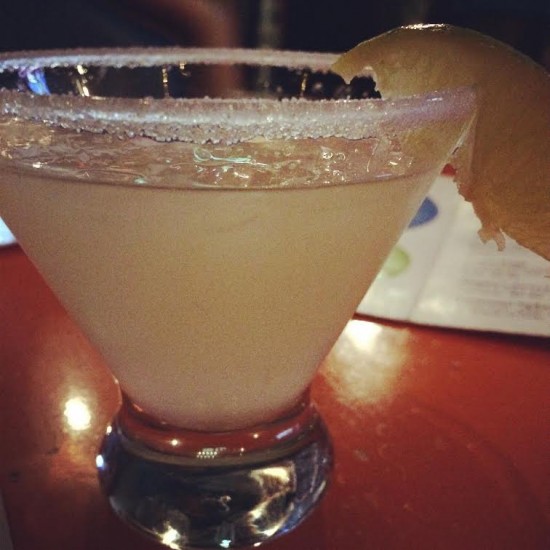 The prices are affordable. The drinks were super cheap, too. Anna got the Angry Pineapple (what a great name) — it was pineapple juice, lime juice and infused Thai chili vodka. It had a kick! I got the Coco-Tini, a coconut rum martini. It was like drinking candy. Both drinks were delicious but not very strong, so that was slightly disappointing. They also had a great beer list, too. 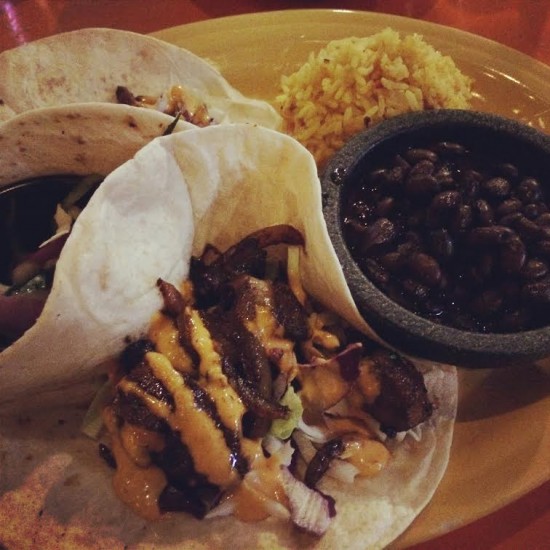 Anna got the kahlua pork entree and I got the Bulgogi Korean tacos. They were steak bites in Bulgogi marinade topped with spicy aioli sauce. It came with dirty rice and black beans on the side. It was so fantastic. The taco meat was flavorful, slightly sweet, and spicy. I loved them. I would eat ten more of these tacos! So good!

I want to go back and get more of those tacos. And…I kinda want that peppermint bark liqueur. I keep thinking about it…Wouldn’t it be a nice adult beverage next to that Christmas tree?? I think so!

I love long holiday weekends! Sleeping in, not having every minute planned, not having to go to work….yay! The weekend held the typical weekend chore stuff but I also brought out the Christmas decorations. A little early for me but I had the time so decided to make the house festive.

Thanksgiving day I slept in a little bit and then went to the Warrior Room. I was grateful they had some morning classes on the holiday. My gym is open until 2pm on Thanksgiving but it is such a madhouse every year that it’s a miserable experience and I just didn’t want to do that this year. Seriously, even getting up super early and going to the gym to try and miss the crowds I’d have to park at the mall across the street and walk because the garage was full and every machine would be used. It was never an enjoyable experience, that’s for sure.

Warrior Room was packed but much more enjoyable! I got in a great workout and my friend Debby joined me. Ashley started the class saying “let’s burn 10,000 calories so we can drink 3 bottles of wine and eat pie!” Sign me up! You had me at pie. The workout was hard and there many moments where I thought I might be pushing it…but in the end, I made it through the workout still standing and burned a lot! 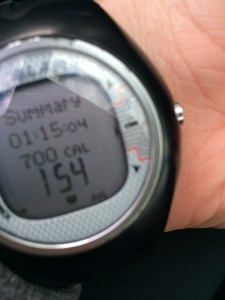 After that Michael and I took Bella for a walk before the rain set in. I ate light most of the day because I knew I’d be indulging later. I stuck with a small salad for lunch. Then Michael and I went over to his mom’s house for the holiday. Michael’s step-brother got the entire meal already done, you just have to pop it in the oven for a little bit before serving, from Zupan’s. He did this last year and it was wonderful. The food is so good! 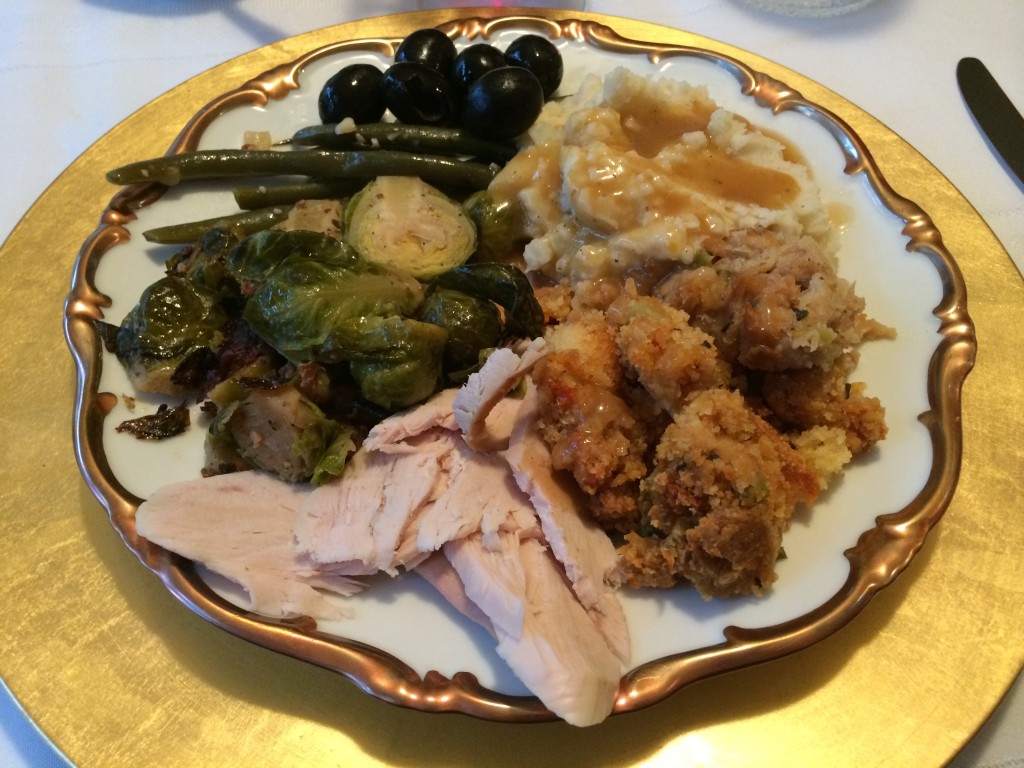 I ate a lot. I tried to be responsible but ended up overeating anyways. Honestly I’d been having some anxiety about Thanksgiving all week–knowing it was going to be a big calorie bomb. It was discouraging to feel like all the progress I had made lately would be entirely undone with one meal. SIGH. Trying to lose weight this time of year is like running up hill pushing a boulder. 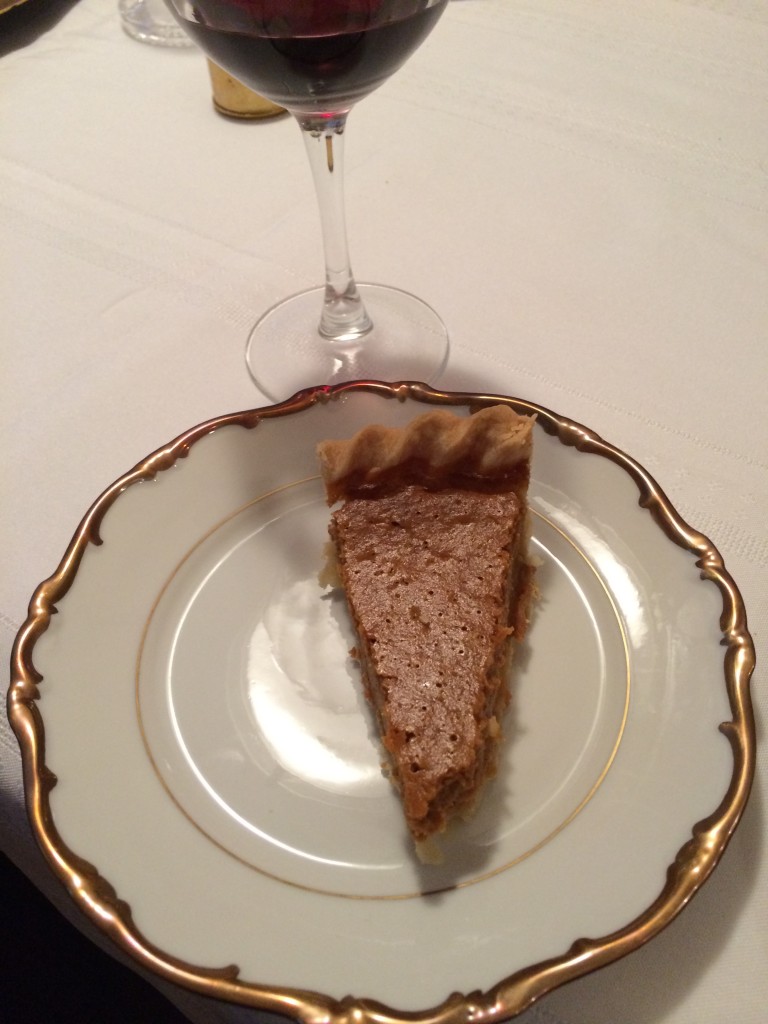 I did go easy with the dessert, though. I was honestly too stuffed to eat much more. Pumpkin pie is my favorite thing! And we did not break into this giant chocolate turkey: 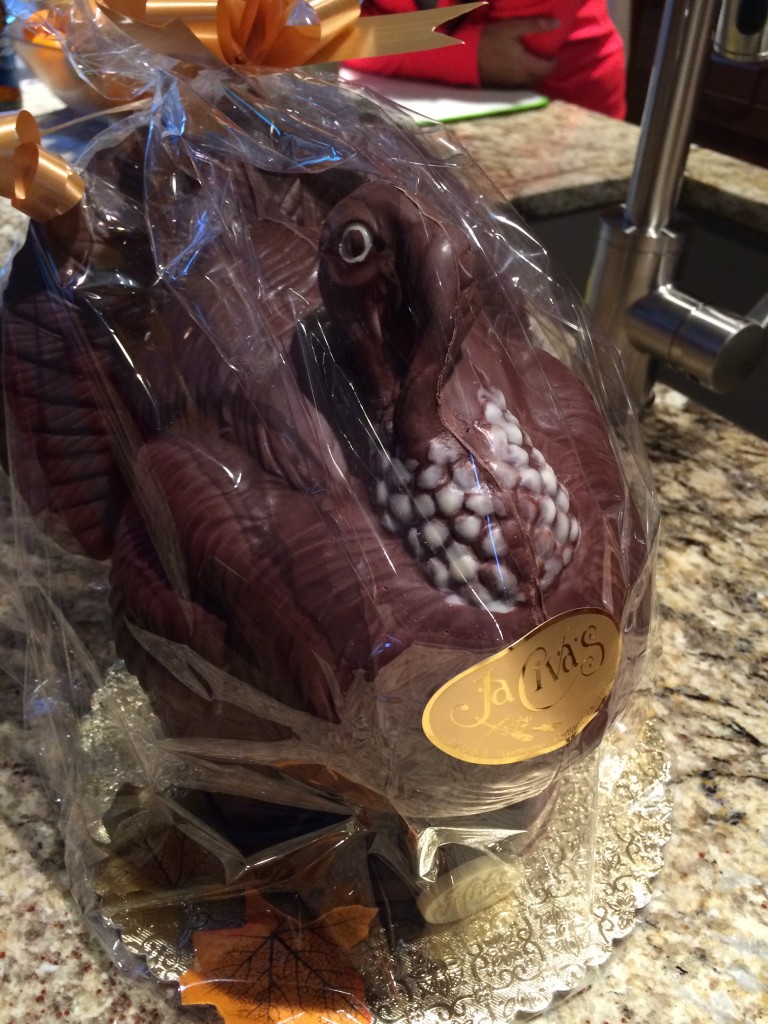 Seriously, it was huge! It looked amazing, too! Once we were all getting sleepy it was time to go. Michael and I went home to be with Bella and ended up laying in bed with the animals watching House of Cards in our PJs. 🙂

Another Warrior workout! Honestly I was still a little sore from Thursday. I ended up going a little easy on myself during the workout as a result. Thankfully there weren’t a TON of squats during this class! My hamstrings were not happy. 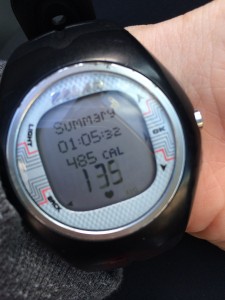 Then I met my friend Robyn for a sushi lunch date. It had been awhile since we’d gotten together (I think it might have been my wedding!!) and a lunch date was perfect. We both ended up getting a Bento Box for lunch. I’ve never had Bento before. It was kind of a nice change, even if I had been craving sushi and that craving hadn’t been satisfied. 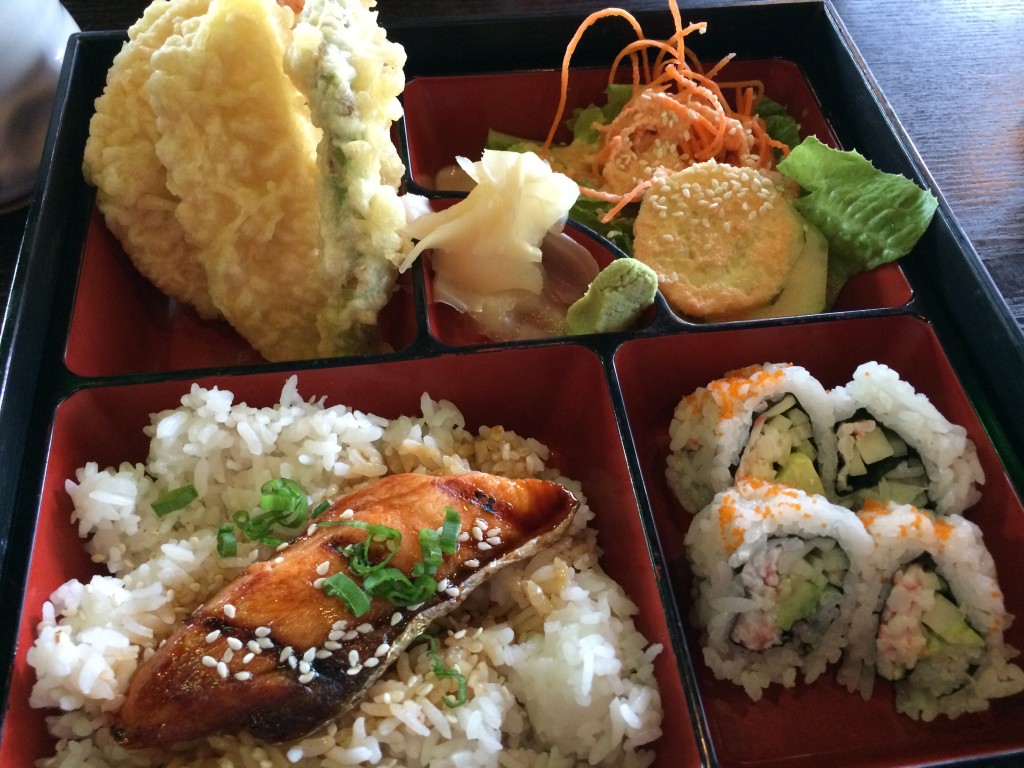 I went with the teriyaki salmon. It was a small piece of salmon, around 3 normal-sized bites. It came with rice, a side salad with cucumber and shredded carrots, a California roll and tempura vegetables. It was really tasty and super filling. It was really nice to catch up with my friend and we drank a TON of green tea and chatted long after the food was gone.

We parted ways and I headed home. I’m not into Black Friday/Christmas shopping and generally avoid the malls and stuff. I did most of my Christmas shopping online and I’m basically done except for two more things I need to get. Now it’s just a waiting game for the packages to arrive so I can wrap them before nosy busy bodies try and sneak a peak. 😉

When I got home Michael and I took Bella for a long walk before the rains arrived. The sun was out but there were some dark, dark clouds off in the distance. Bella got a bunch of walks over the long weekend and was happy with that–as I was happy with getting some extra exercise in! 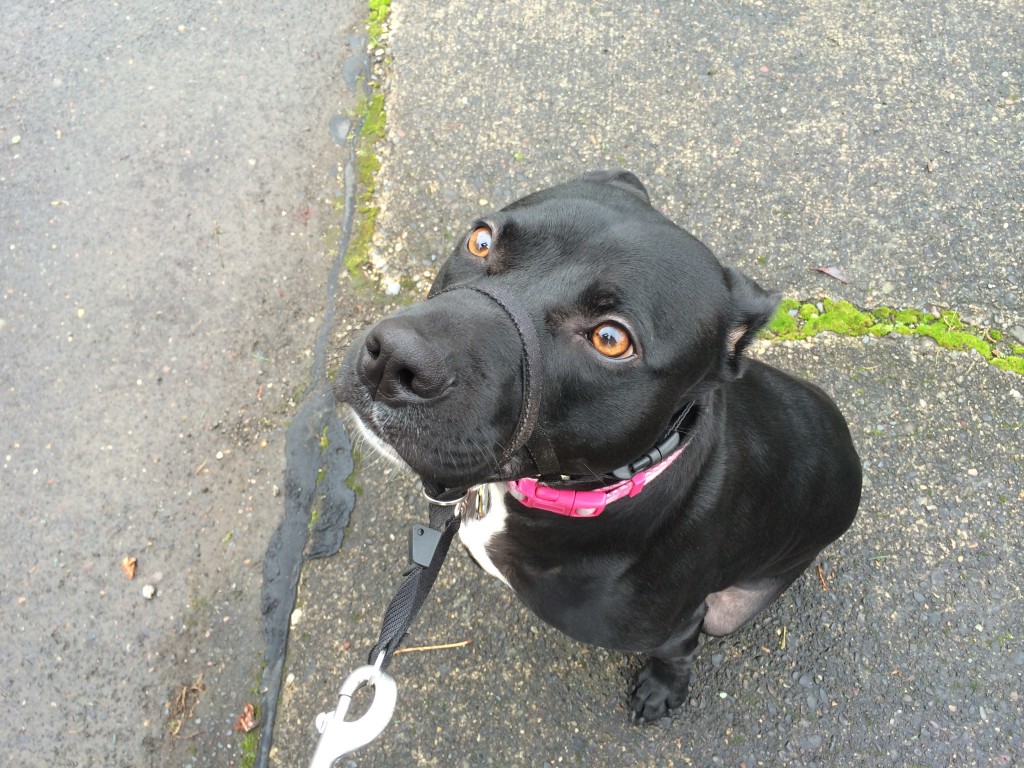 Sunday finally came, sad that meant that it was back to work soon. 🙁 I went to the gym (it was very cold and very blustery but the sun was out) and did about 40 minutes on the elliptical (3.35 miles) then it was time for yoga. After being sore for several days that yoga class felt spectacular! 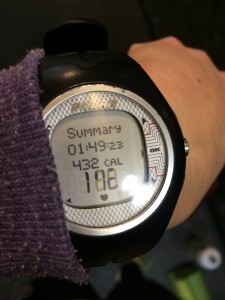 The rest of the day was uneventful until it was time to go to Michael’s mom’s house for a party. She hosts a charity party the weekend of Thanksgiving every year and this year we were actually available to attend! She sells wreaths for a charity and people come over to pick up the wreaths and enjoy a holiday party at the same time. 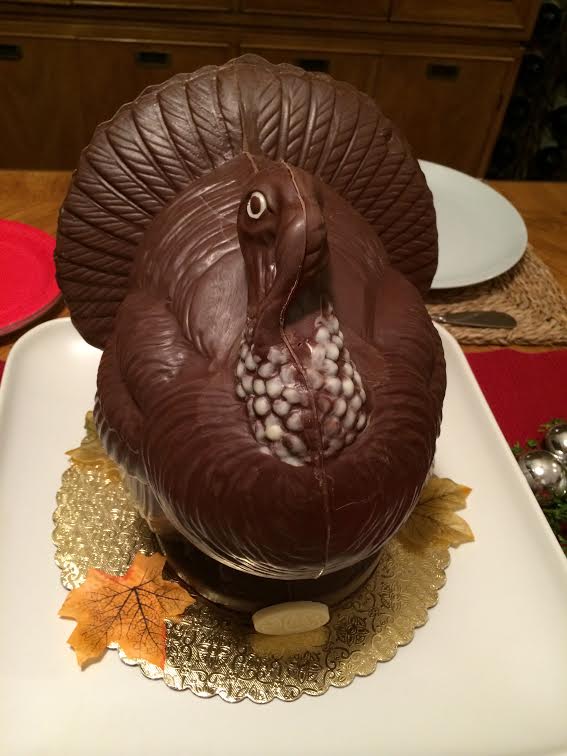 They unwrapped the chocolate turkey! (Sadly Michael and I left before they carved into that thing!)

We went over a little bit early to see if she needed help setting up. The places was already decorated to the max. Tons of cute Christmas decor, the tree was up and decorated and holiday music was playing. The place was packed! There was also tons of food. It was mostly finger foods. There was crab rangoon, vegetable spring rolls, crab and artichoke dip, orange chicken and then meatballs with various dipping sauces. 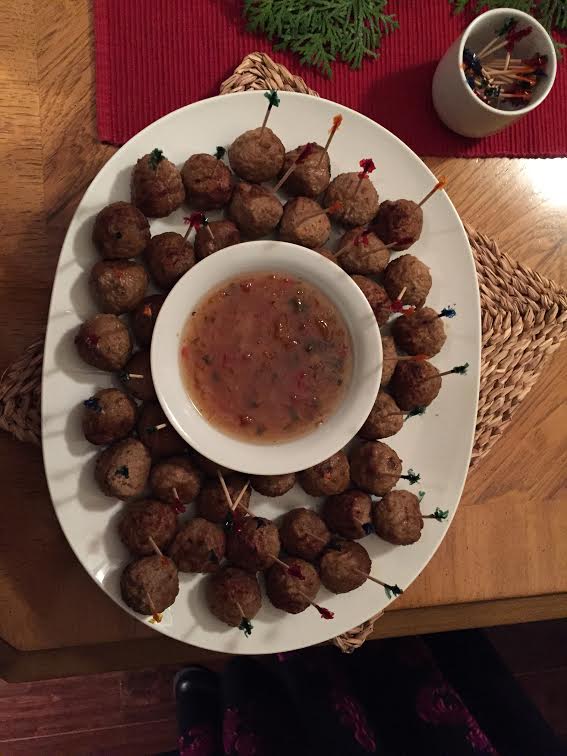 The meatballs were really good. There was a chipotle cranberry sauce that went with one of the platters and it was really good. Sweet but not overly sweet. I basically ate dinner full of finger foods. I had 2 crab rangoons, 2 spring rolls, about 6 meatballs, and 3 orange chicken pieces.

Look at these adorable wine stoppers: 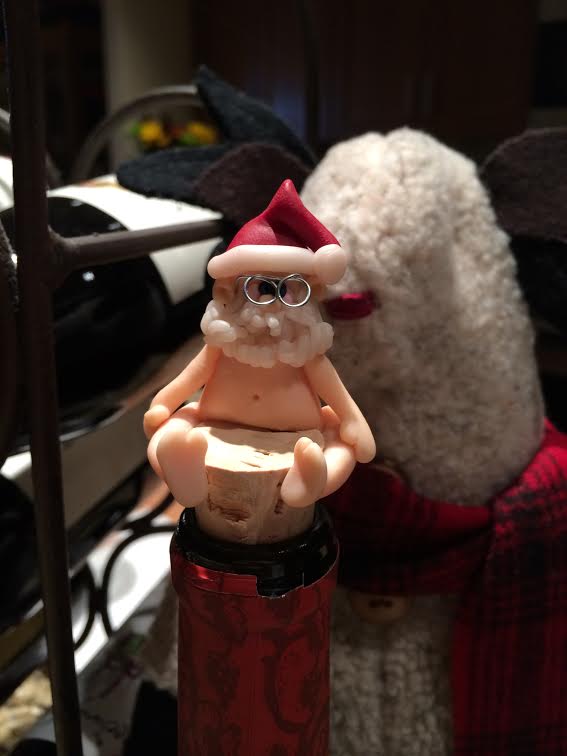 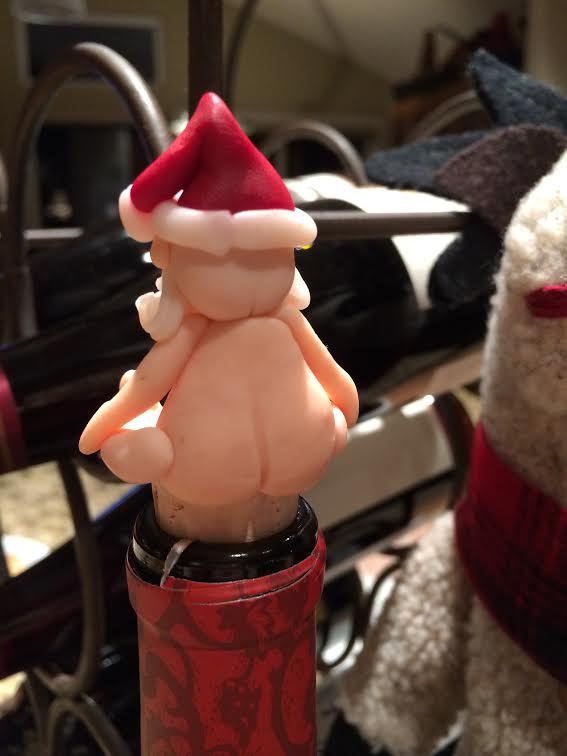 How funny is that? We stayed for a few hours, munching on food, mingling with people. Then it was getting late and we decided to head home. Michael was still hungry (I was not, I ate tons of finger foods) so we stopped at Five Guys on the drive home so he could get a burger. 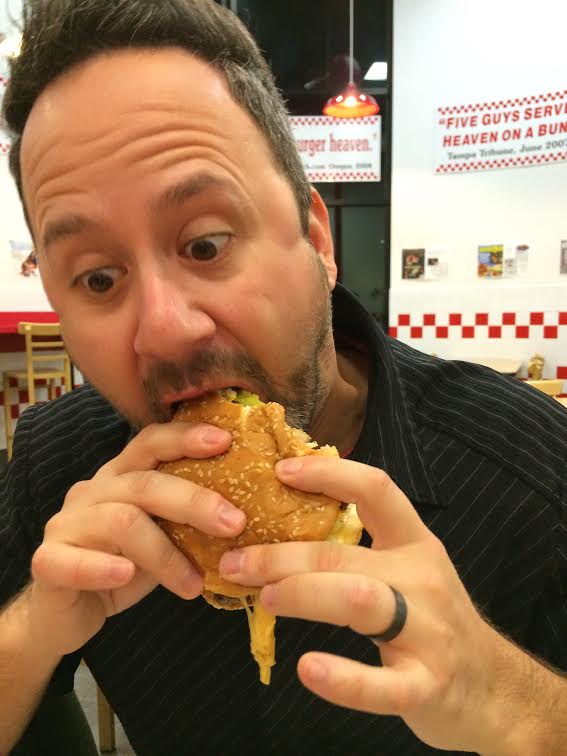 He did give me two bites of his burger. I went overboard all weekend. I knew it would be a challenge with the events we were going to. At the party I tried to stay away from the buffet table to keep myself from just mindlessly munching, but I admit, it was hard. The festivities made it easy to splurge. 🙁 Anyways, Monday morning and back on track!