Wednesday night was a busy one for me. I went straight to the gym after work to get in a weight lifting session before dinner with a friend. We had one of Michael’s friends over for dinner and to talk shop. He’s an amazing artist and he was bringing over samples of his work for me to look at. I’m planning on revamping 110 Pounds and Counting and I think Stu’s artwork would look amazing on my site.

Since I didn’t have tons of time to work out, I had to make that hour count. I did not rest very long in between sets and as a result my heart rate stayed pretty elevated during my workout.

I did two turns around the weight machines before heading over to the other side of the gym. There I did my new routine:

Then immediately using the Medicine ball to do the Russian Twist ab workout: 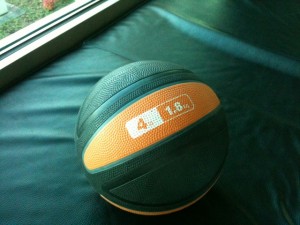 Immediately doing crunches with the half ab-ball: 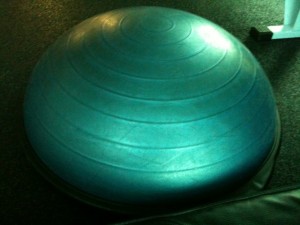 Then back to the row machine. A few times I added the Cable Cross to the equation. 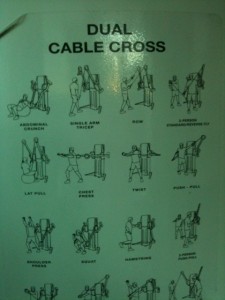 I focused on my biceps this time. I was hot and sweaty after a few rounds of this routine. It felt good though. The medicine ball I used was lighter than the one I normally use but someone else had it so I had to make due. 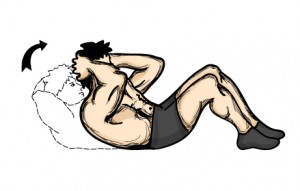 Like anything else there are mixed messages on whether or not crunches are worth it. Some say you won’t get a six-pack by doing crunches, others say you will. All I know is that my abs burn when I do them–that has to mean it’s working, right? 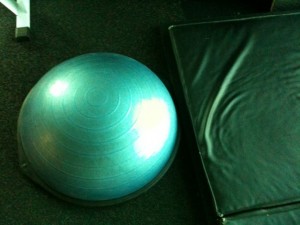 I started doing the crunches with the half ab-ball on the softer mat because my tail-bone was getting sore afterward. I think the harder mats were just too hard.

While I was doing my routine there was a girl having a personal training session next to me. I half watched to see what kind of moves he was showing her so I could recreate it myself. 🙂 I also noticed that she was complaining and whining the whole time. If you don’t want to do it, why sign up? I was baffled. And it made me miss my old personal trainer who kicked my butt! I hope I heal soon so I can get back to some hard core working out with him.

I did my stretching and then hurried home. It was a good work out and I definitely made that hour count! 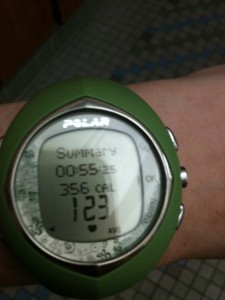 When I got home I drank a small glass of chocolate milk. Michael picked up two pizzas from Papa Murphy’s: a deLite pizza for me (165 calories a slice) and a monstrous double decker pizza for him and Stu. 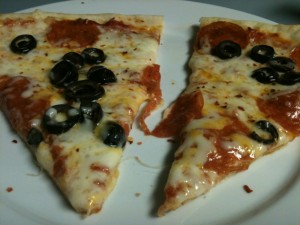 Michael grilled them both outside. 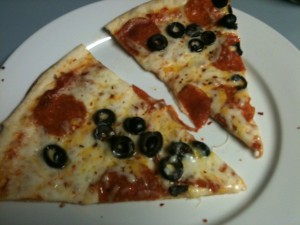 I ate two slices of the “skinny” pizza and then I had to partake in the Gluttonous Pizza…it just looked too dang good. 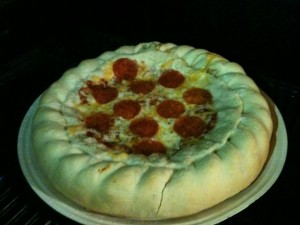 I picked the smallest piece available and ate it. It was heavenly. 🙂 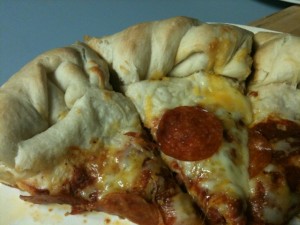 I’m guessing that thick pizza slice was at least 450-500 calories a piece. I don’t feel guilty for eating one because somehow I had tons of calories to spare by dinner time. And it was sooo good!

The meeting with Stu went really well. I was blown away at his artistic ability and his artwork should really be in a children’s book. It looked like something out of Alice in Wonderland/Edward Gorey/Tim Burton. Awesome.

I used my Foam Roller last night on my IT Band. It was pretty angry at me yesterday. Maybe I did too much walking this week.

QUESTION: Can you do crunches? Do you see results when you do them?

The Secret to Weight Loss is…..