It’s a good thing I burned so many calories at the gym Saturday morning because I ate them all back at dinner Saturday night! 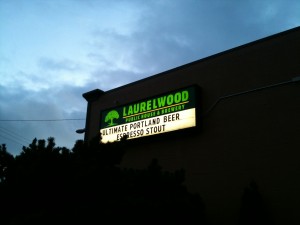 I met my friend Robyn at the Laurelwood Brew Pub in NE Portland. When I suggested it I thought it was a different pub that I’d been to a few years ago. I got there and realized I’d never been before. I think the pub I was thinking of is the Alameda Pub. Oh well! I like trying new places. 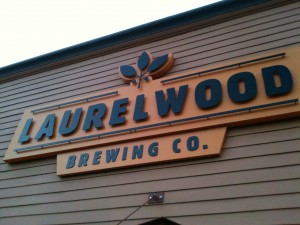 I got there at 5pm and the place was already packed. The bar was full. I was able to get on the list for a table for two and the wait was short. Robyn arrived and we were able to get an order in before Happy Hour ended. 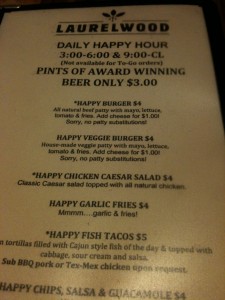 Robyn and I both ordered the fish tacos off the happy hour menu. They were a bit of a disappointment to be honest. They weren’t very flavorful and they were so wet and drippy the homemade tortilla just turned to mush. 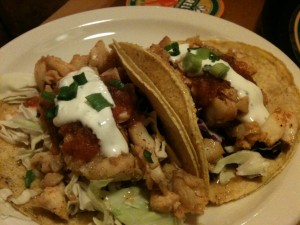 For my adult beverage enjoyment I ordered the sampler platter. I asked her to substitute the seasonals for the Porter and the Stout because those aren’t my types of beers. 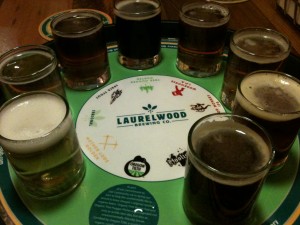 I love getting the sampler trays at breweries. It gives me the opportunity to try beers I’d normally never order. There were two beers I did not like on my sampler tray so I gave those to Robyn. 🙂 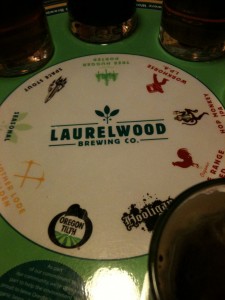 Of the samples I had I decided my favorite was the Free Range Red. I ordered a full glass of that one. Robyn was drinking some fancy seasonal beer that was so strong the waitress said they only allow people to have one! She was nice though and let Robyn have two. I wish I could remember what it was called…

I really enjoyed my Red. It was sweet but not overly sweet and just the right amount of hops for this beer-wussie.

Free Range Red is a rich copper-colored ale with loads of fresh hop flavor. Medium in body the caramel sweetness blends wonderfully with the smooth hop flavor creating a balanced, super drinkable beer. This beer is brewed with 100% Organically-grown malts.

Comments from the Brewmaster:
Chad: “This beer is Laurelwood. Organic, hoppy but balanced, and super drinkable. Free Range is by far our most popular beer.”

Robyn and I also shared the Artichoke dip. It was to die for! 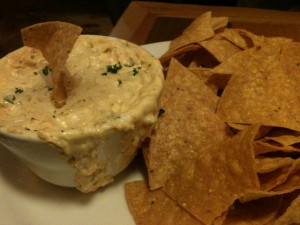 I definitely could have eaten that Artichoke dip entirely by myself. It was so good. Thankfully Robyn ate some too. 🙂 My beer was finally gone but the conversation was so good we lingered longer. 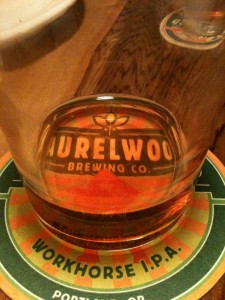 Instead of ordering another beer Robyn agreed to split a piece of chocolate cake with me. You know when you have those great times with friends, where conversation is good you don’t want the evening to end and when the food and drink stop that means it’s time to go…We made it last a little longer with this: 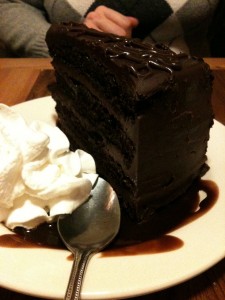 The chocolate was wonderful. The cake part was a little on the dry side. But then not much compares to the amazing desserts of Papa Haydn’s. 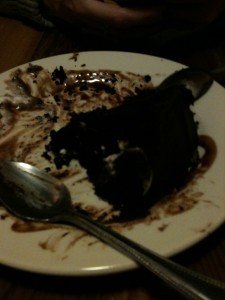 We parted ways and I went home. Michael and I sat on the floor in front the fireplace and chatted until bedtime. It had a great night out with a friend and a good night home by a cozy fire with Michael.

QUESTION: What was the best thing about your weekend?