I’ve been a fan of the Howard Stern Show for like 15 years. What people may be surprised about is that Howard is a health food fanatic and also a runner. He cares about his body and keeping fit. Robin is famous for her wacky fad diets (the maple syrup/lemon juice concoction and then the green drink fads). Well, there are two people on the show that do not care about their health–in fact, they LOVE fast food. Love is a weak word, I’d say more obsessed with it. 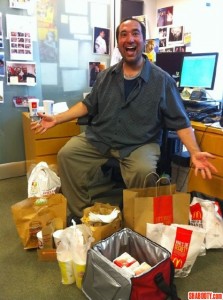 John Hein and Jason Kaplan are the most vocal about their love for fast food. In fact, they host a show on Sirius entirely about Fast Food AND they eat their favorites on air while they debate what is better. While it’s comical, it’s also a bit disturbing. 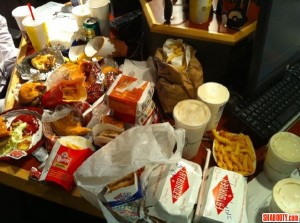 Recently Howard teased these guys because they sit in the back office while he’s on the air and have lengthy, involved debates about what fast food is better and where they should all go to lunch that day. These conversations can go on all morning long in preparation for the lunch hour. Then these guys go out to fast food together. Jason discussed at length about everything he puts mayo on.

Howard commented that Jason is “bigger than ever” and I believe that John is diabetic. Yet these things don’t deter them from eating fast food every single day (sometimes multiple times a day). What struck me as the most obvious is that John and Jason were totally feeding off each other’s food addictions. They discussed where they’d be eating and they would go together.

Food enablers are the friends or family that we share bad habits with. We ALL have friends who are the enablers.  These are the people that share our bad habits and feel content to indulge in the bad habits with us because it’s comfortable. We don’t judge each other, it’s safe and easy.

I’ve had food enablers in my life. I had one friend in my mid-twenties that I went clubbing with. While she didn’t really have a weight problem, she loved fast food. After dancing and clubbing Friday and Saturday nights we’d stumble to the nearest Wendy’s or Taco Bell at 2 am (or a Portland favorite: The Hotcake House) and eat a bunch of junk food.

Two of my closest friends have also been “enablers” but we’ve managed the work through that during my weight loss journey and our friendship remained intake despite my change in habits. 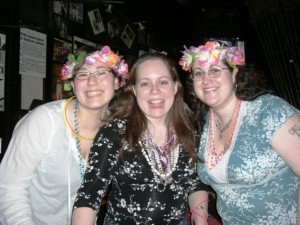 When Rachel and I were in high school I remember asking her “Are you hungry?” and her response was “Always.” Or I’d say, “Can you eat?” and she’d say “Definitely.” And we’d happily head over to Beth’s Cafe or Denny’s and squat for hours eating and talking. I still smile from the happy memories of those days. Were these bad habits? Sure. But Rachel was also one of my biggest supporters when I decided to lose 100 pounds and she knew that encouraging me to eat healthy and change my habits was how I’d be successful. She was a true friend that wanted me to be healthy. Our friendship survived my transformation as a result.

My other closest friend, Robyn, wasn’t really a food enabler but she struggled with her weight just like I did. We were both at our heaviest at the same time. While we didn’t encourage each other to eat badly, we both struggled at the same time. It was like having a partner in crime to complain to about weight issues. What I love most about how our relationship changed was that we both lost the weight and kept it off. Not only that, our relationship became about fitness. Whenever we hang out these days it’s usually a gym session together, or a fitness class. I love it and so does Robyn! We both get our workouts in and we can catch up and spend time together. It’s fun to have someone who encourages you to do “a few more squats” or add some weight to the machine. Healthy competition works.

The hard part with Food Enablers is changing the dynamic of the relationship without losing the relationship. Not all of the friendships will remain intact but I think it’s important for health to be the priority.

QUESTION: Do you or have you had food enablers in your life?

Sunday night I made an epic dinner. All by myself. Remember how I said I wasn’t a very good cook? Many of my dishes turn out to be a disaster that I have to toss? Well I was a bit apprehensive about attempting to make an entire chicken all by myself. 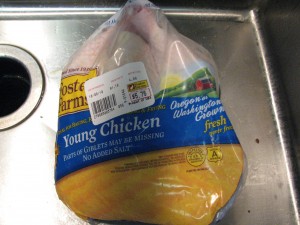 First up: some good tunes to listen to while I cooked. 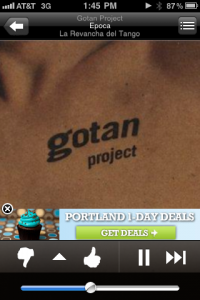 Lately I’ve become obsessed with the Neo-Tango music channel I created on Pandora. I love it. It’s upbeat and cheerful music. Now onto the recipe:

1. Place rack in upper third of oven and preheat to 400 degrees.

2. Wash chicken inside and out with cold water, remove the giblets, then let the chicken drain, cavity down, in a colander until it reaches room temp (about 15 minutes).

4. Pour lemon juice all over the chicken (inside and outside). Season with salt and pepper. Prick the whole lemons three times with a fork and place deep inside the cavity. (Tip: If lemons are hard, roll on countertop with your palm to get juices flowing.)

5. Place the bird breast-side down on a rack in a roasting pan, lower heat to 350 degrees and bake uncovered for 15 minutes.

6. Remove from oven and turn it breast-side up (use wooden spoons!); return it to oven for 35 minutes more. Test for doneness—a meat thermometer inserted in the thigh should read 180 degrees, or juices should run clear when chicken is pricked with a fork.

7. Continue baking if necessary. Let chicken cool for a few minutes before carving. Serve with juices.

I made the Chicken with No Name. It has a name but I won’t post it here just yet. 🙂 It’s an inside joke between Michael and I. 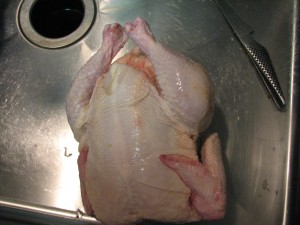 I had to clean the chicken myself (and take out the giblets–eeeew). That was a moment of panic I had to quickly get over. I was a vegetarian for years and part of the reason was a revulsion to touching raw meat. Yuck! It was so creepy. But I guess I must REALLY love my boyfriend. 😉 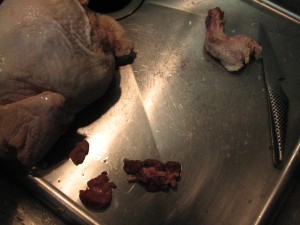 I followed the directions and let the chicken sit for a few minutes draining. While that was going on, I got all the ingredients I was going to need. 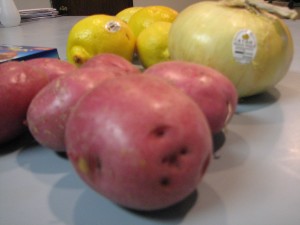 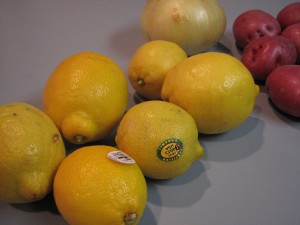 One thing I need to really work on when it comes to cooking is to prep EVERYTHING before I start. And read the instructions all the way through. I was also going to roast some carrots and red potatoes and onions. Did I get the carrots ready? Nope. Then I was scrambling. I also didn’t notice that the potatoes took an HOUR in the oven. Oops! More on that later. 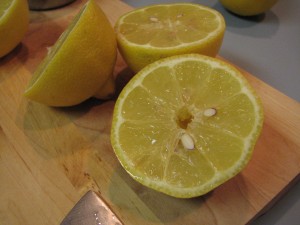 Thank goodness I got extra lemons. I was worried I wouldn’t have enough to squeeze out for 1/2 a cup. 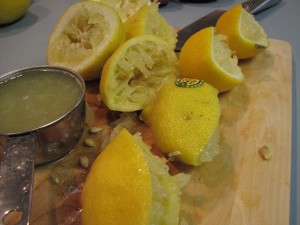 Lots of lemons were used. I dried the chicken off and put it in the roasting pan. 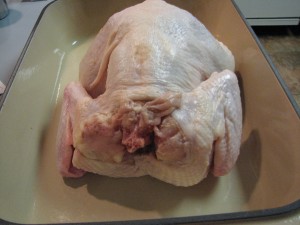 I poured the lemon juice all over the chicken and inside the chicken. 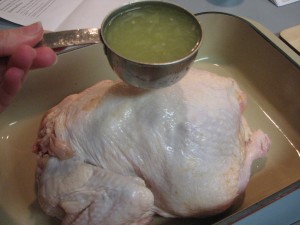 I stabbed the lemon with a fork a few times and then stuffed it inside the chicken. 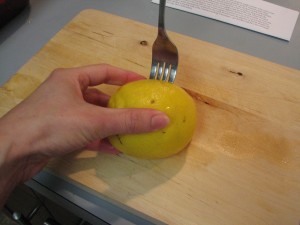 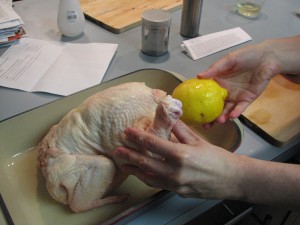 Unfortunately I could not fit both lemons inside the chicken. 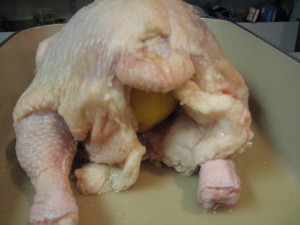 I popped it into the oven for the first part of the roasting. During that 15 minutes I worked on the potatoes.

I felt rushed to prep everything because I realized the dish had to bake for an hour! I wanted to make sure everything finished cooking at the same time. 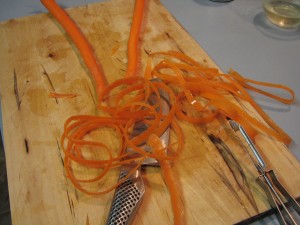 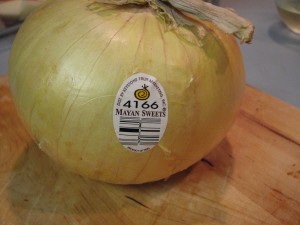 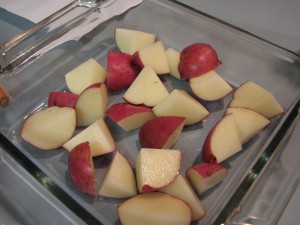 I’m usually pretty good at multi-tasking but when it comes to cooking I have a hard time timing everything correctly. 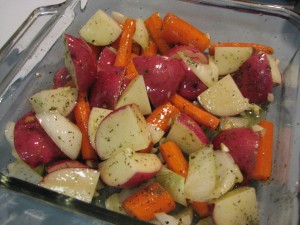 I added a little too much olive oil to the mixture. Oh well. Live and learn. 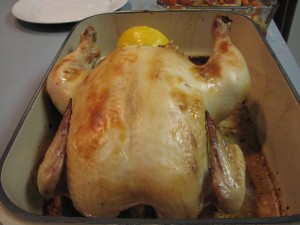 The 15 minutes were up so I took the chicken out and flipped it over.  I also put the potatoes in the oven. 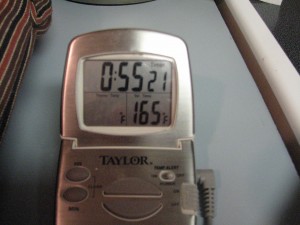 The recipe called for roasting it another 35 minutes or so. I checked on the chicken and the potatoes every 10-15 minutes.  I kept checking the temperature. The thermometer said Poultry should be a minimum of 165 degrees. The recipe called for it to be 180 degrees. I realized about half way through the cooking that I stuck the thermometer in too deep because the temperature wasn’t rising. I think I stuck it all the way through to the cavity. I removed it and put it in again and it read the temp right. 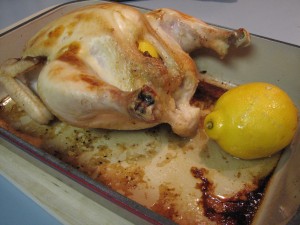 At about 55 minutes I took the chicken out and let it sit a few minutes before carving it. The temperature was over 180 degrees, so that was good. 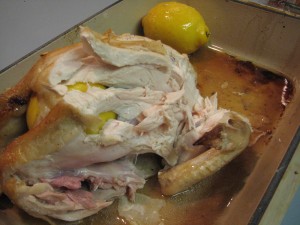 A little chardonnay to go with dinner: 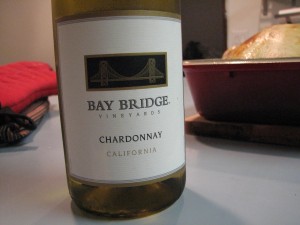 The potatoes were perfectly cooked. I loved the roasted veggies. The chicken was also perfect! It wasn’t dry or overcooked and the meat was so moist and succulent! 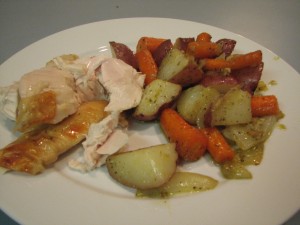 It was so delicious. And I did it all by myself! 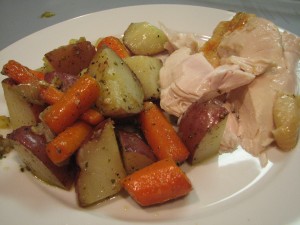 I am so proud of myself for doing something so hard (for me). I loved the lemony flavor of the chicken, too.

Thank you Howard Stern for telling us about this fantastic dish also known as Engagement Chicken.  Despite it’s ridiculous name. 😉

And no I had no ulterior motives for making this dish.

QUESTION: Have you ever attempted something like this? How did it turn out?