We are enjoying the Sun Basket recipes so far. This post is about week two’s recipes.

A reader commented on my last post about the waste of these meal services. I wanted to comment on that. With Blue Apron I remember feeling like the waste was pretty bad (and kind of a turn off for me). But so far with Sun Basket they seem pretty good about limiting waste. The box arrives and each of the three meals are packed in a paper bag (so we recycle it). There are a few plastic bags for certain items but overall there is not a lot of packaging or waste. I’m pretty happy with that.

This meal was by far my favorite of the boxes we’ve had so far. I absolutely LOVED the flavors. The tahini/paleo mayo sauce was super flavorful and delicious, too. I loved the lettuce cups. I’ve seen a lot of those types of recipes but it never worked well when I tried it because the lettuce always ripped so it didn’t work well as a cup (or bun substitute). But the recipe described how to do it: basically cut the base off the head of lettuce and then carefully peel the leaves off. It worked a lot better and they didn’t rip. 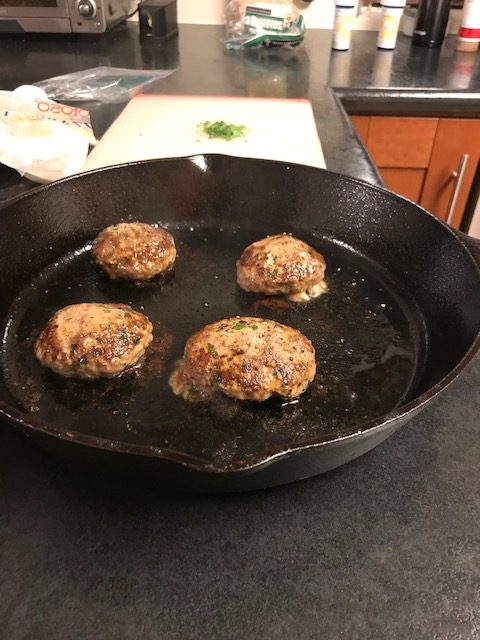 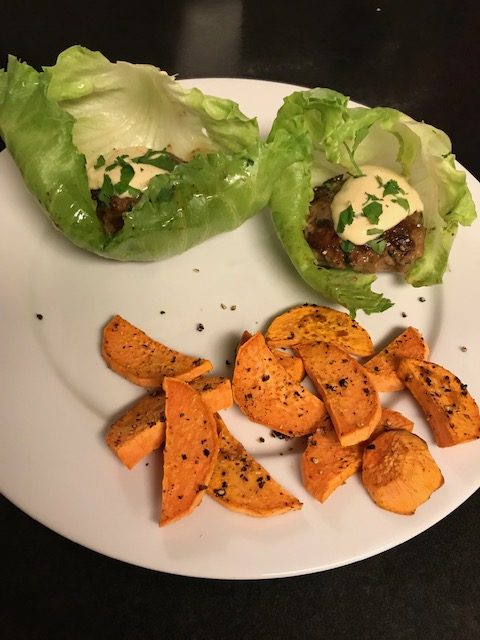 This recipe was a home run and we will definitely be making again in the future. I’ve seen ground lamb at Trader Joe’s on occasion so I will try and look again next time to see if I can find it.

The second recipe was the Hungarian meatballs. I’ve made cauliflower rice a bunch of times and I’m a fan. So far the meals have been pretty good overall and the portions were right. In this one there seemed to be a lot of cauliflower rice so we ended up making it 3 servings and I had some of the leftovers for lunch the next day. 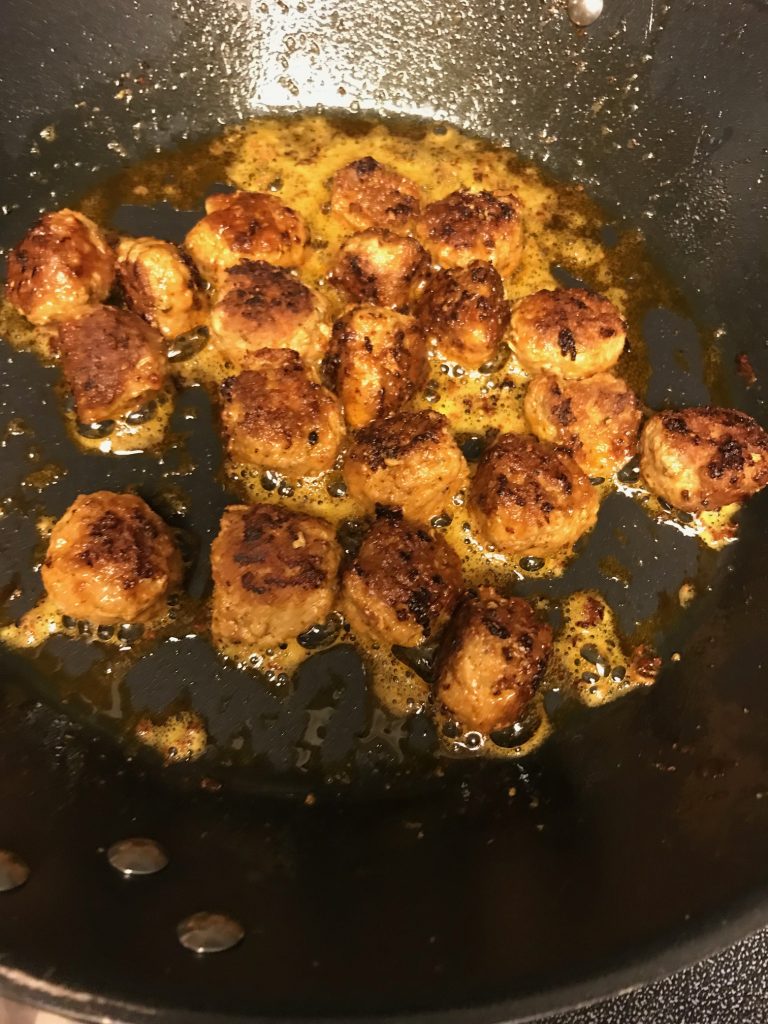 I’ve never worked with watercress before and honestly, I don’t know what it really added to the dish. It didn’t really taste like anything to me. Maybe I’m wrong? 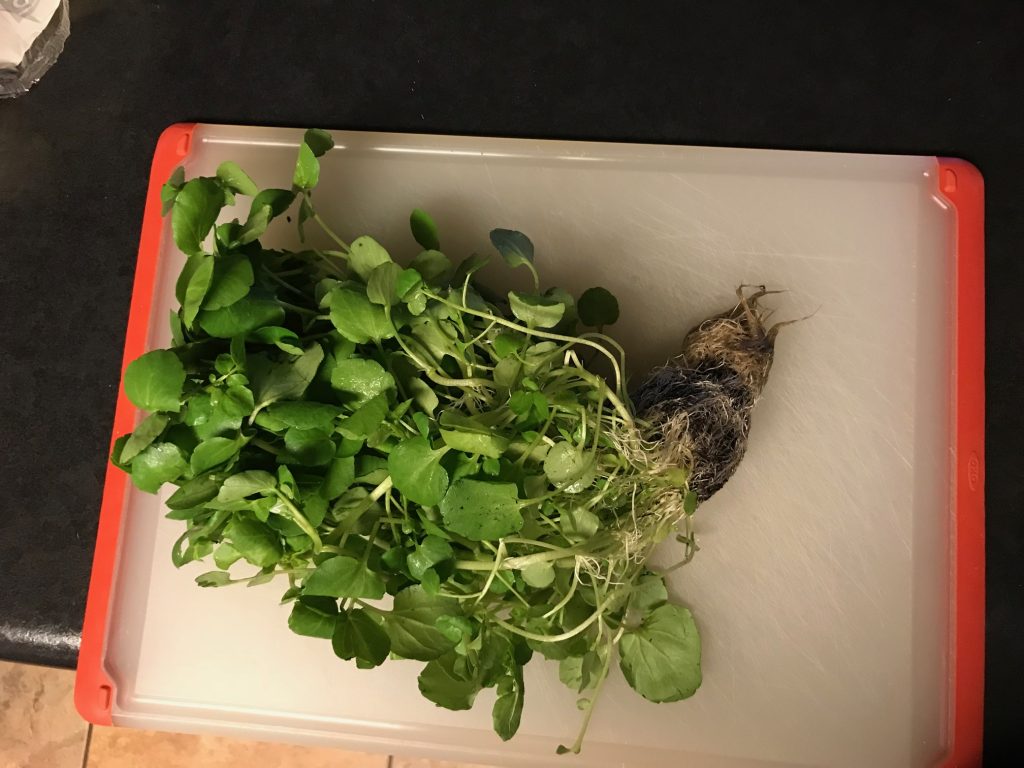 Everything worked with this recipe but it felt a little dry and it needed some kind of sauce. I ended up adding some Goddess Dressing to the meatballs and that helped. 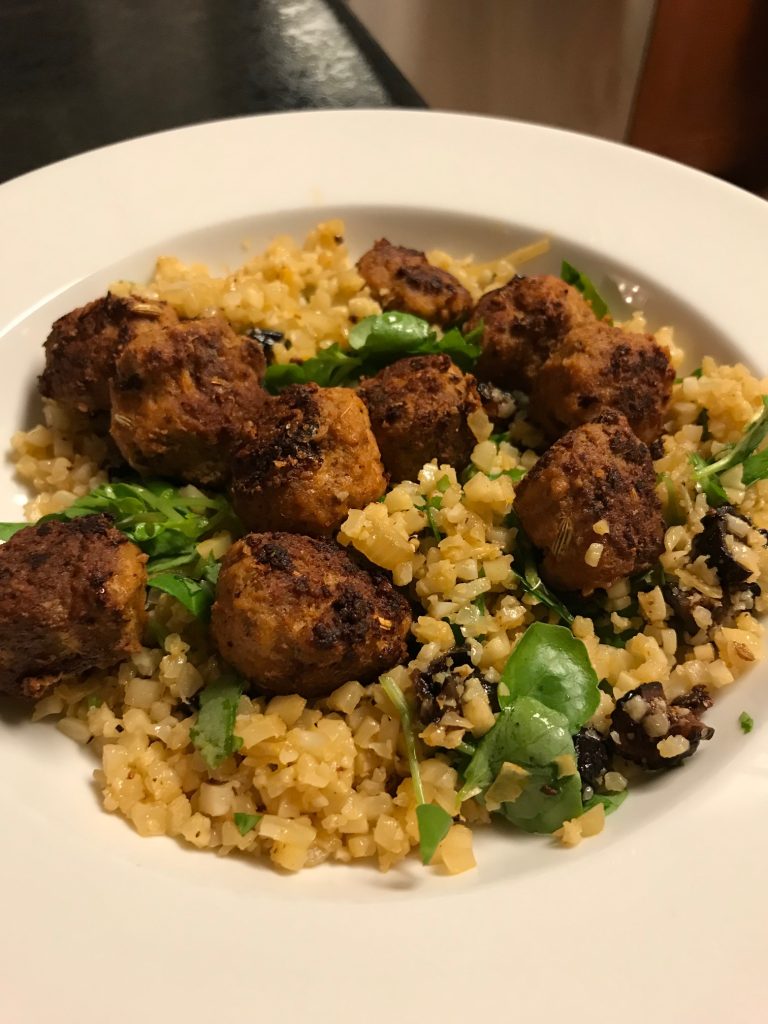 This was a very interesting recipe. Sure it was steak and veggies, which we do often on our own, but sauteing the broccoli was a new technique for us and radishes are not something we eat–like ever. I’ve pickled radishes a few times before and that was good but I can count on one hand the times I’ve eaten radishes. It was nice to try something new! 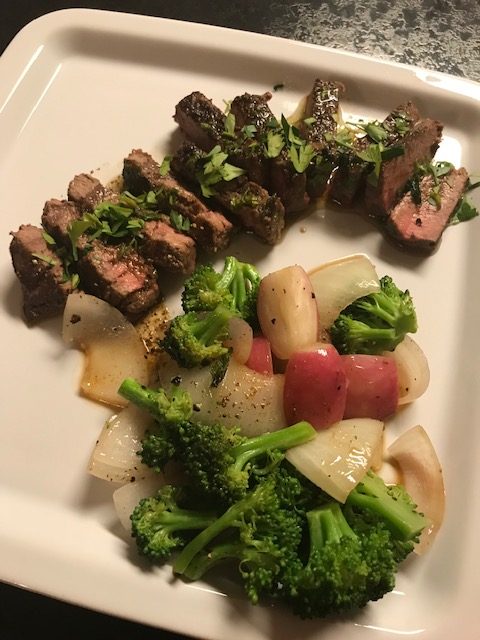 The steak was tender and delicious and I absolutely loved the anchovy sauce! I wasn’t sure I would but it was really flavorful and went great with the steak and vegetables. 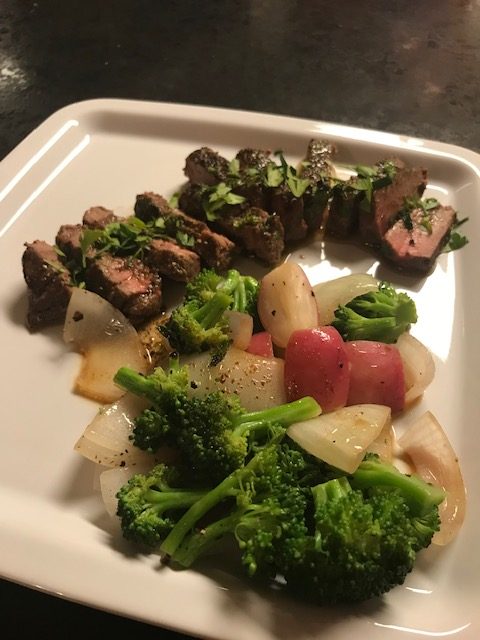 I have a discount code, if you want to use it!

A few weeks ago, I mentioned that we tried the “Imperfect Produce” weekly box subscription. We tried it for a little over a month and I ended up cancelling it. I didn’t like that I felt so much pressure to use up the produce quickly because it was often on the verge of going bad.

A few years ago, Michael and I tried Blue Apron a few times and we really liked it. We liked the recipes we tried but in the end, the cost was a factor for me so we didn’t continue it. Since then, I’ve been seeing the “meal services” options get a lot better. Now there are ones that are diet-specific, which is cool. I decided to give Sun Basket a try because I liked that we had the option of doing gluten-free or Paleo diets. 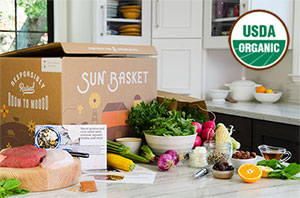 I signed up with a discount code for the first week. I downloaded the app, which is nice and very easy to use. A bonus with the app: you can choose your three meals for a month out. I already have the next month of weekly deliveries all planned out. 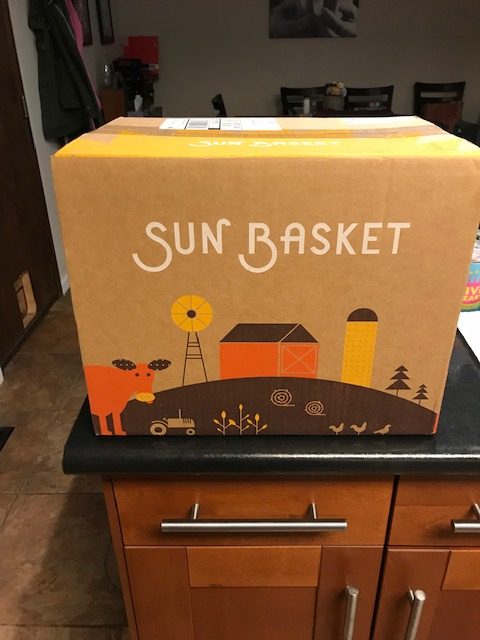 When I tried to decide which meals to pick, I chose this way:

The first meal we made from the box was a Moroccan dish: Moroccan lamb merguez patties with warm carrot salad 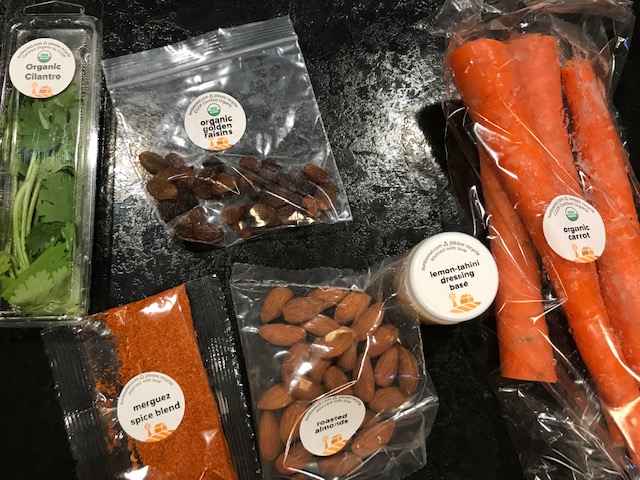 I’m not sure how long it actually took to make because I did a bunch of prep and then a little while later Michael made the lamb patties and started cooking. But it felt like a fairly easy recipe to make. 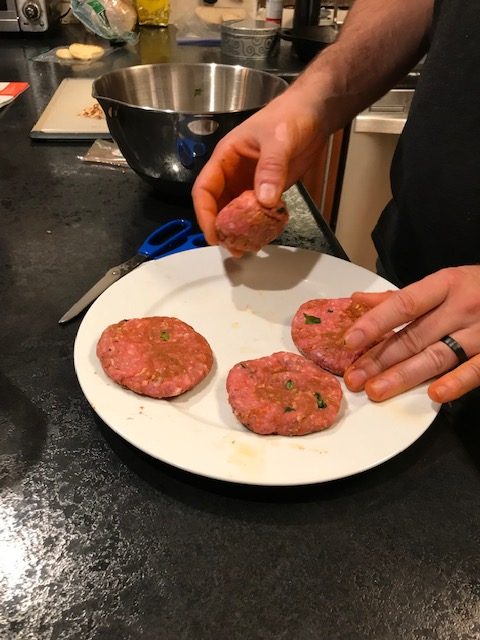 The verdict: delicious! We were both really happy with it. The arugula salad with raisins, chopped almonds and tahini dressing felt light and healthy. I loved the roasted carrots, so did Michael and he’s not a fan of roasted veggies. The lamb patties were good, too. 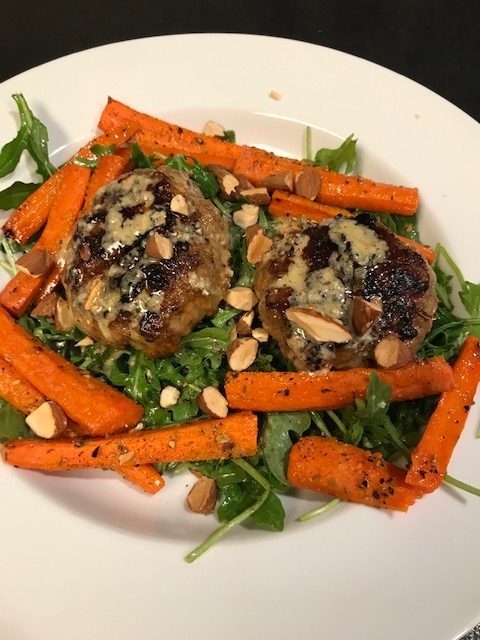 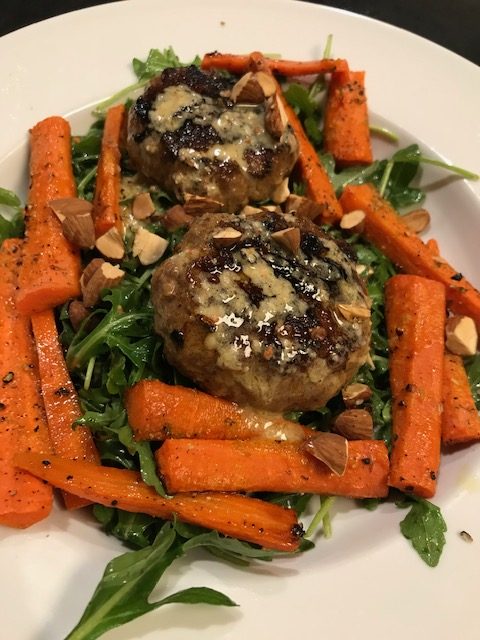 It was a great dinner for a first time out.

The second meal was salmon with broccoli:  Roasted salmon and broccoli with almond-date tapenade 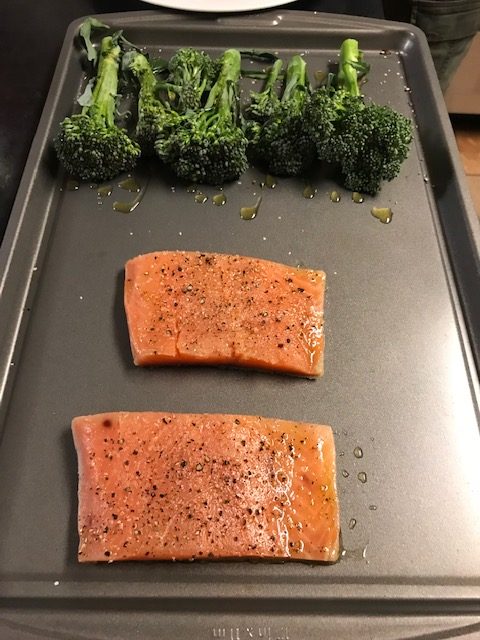 This was a good dinner for a busy weeknight meal. It was pretty quick and easy to make. It wasn’t all that different than our typical dinner (we do salmon and broccoli all the time) but it was nice trying it with toppings! 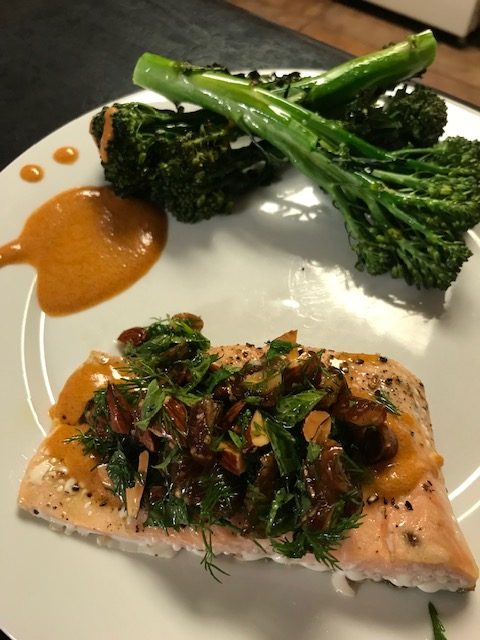 The date-almond-dill-mint tapanade was really good! It was not something I would have thought to put with salmon but it had a nice flavor and a different texture that went well with the dinner. 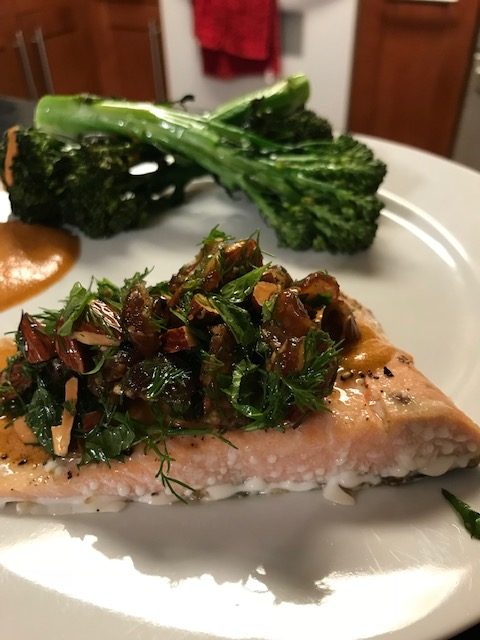 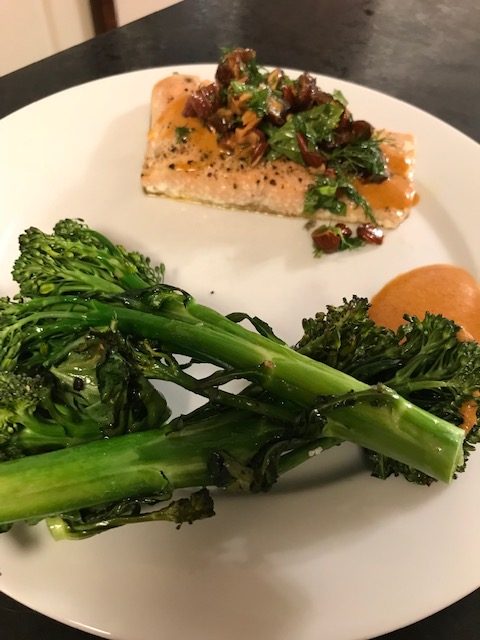 The harissa sauce was interesting. It wasn’t spicy–it was kinda smoky? Overall it was a good meal but not super impressive, basically because we do salmon and broccoli once a week. 😉 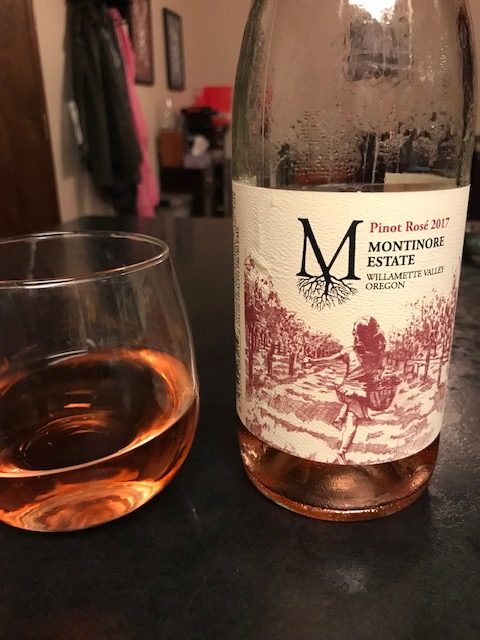 The glass of rose went nicely with dinner, though! 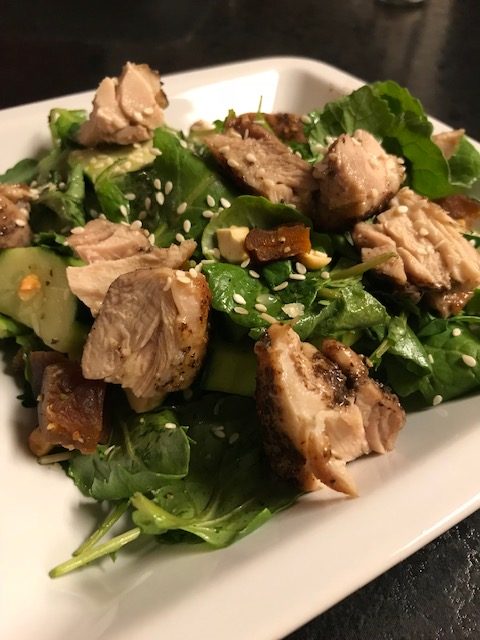 This was another easy and quick recipe. I prepped the salad and everything and then Michael cooked the chicken while I put Logan to bed and read him stories. The meal was good and low in calories. My opinion was that it wasn’t anything special. It’s not that far off from meals we make on our own (we do a lot of salads like this) but I did like the unique flavors (the toasted sesame oil dressing with apricots and cashews). 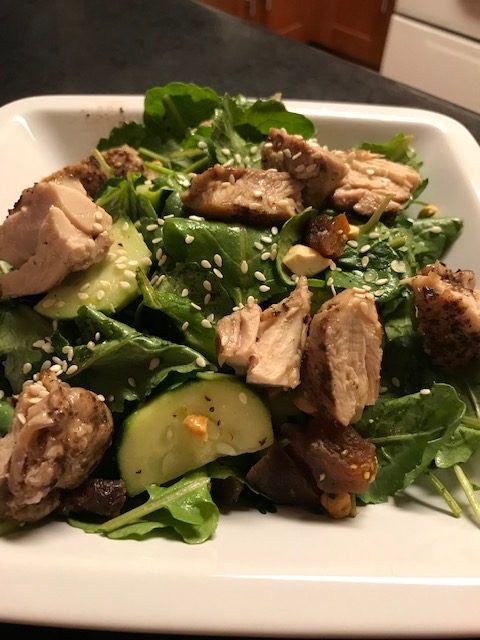 Michael liked the meal but thought it would be better with seared ahi tuna. We could easily make it on our own and try that.

The first week of meals was overall pretty good. The lamb dish was my favorite. We are going to keep trying Sun Basket to see how it goes but I am also on the fence about doing it long term because it IS rather spendy. Stayed tuned!

What’s cool is that in the box they send a recipe book of all that week’s meal options so you can make some of the other recipes on your own if you want. I marked a few of them to try.

I have a discount code, if you want to use it!