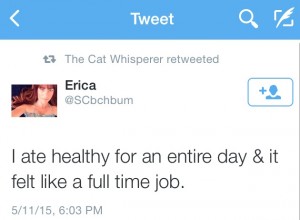 I really appreciate all the tips and ideas that people left on my post about reducing my calorie intake. There were a lot of good ideas that I’m taking into consideration. Lori from Finding Radiance left me this comment:

“I hear you. I can’t do the 1200 calories, either. That is what I am supposed to eat to lose 1 pound a week according to MFP – can you believe that? I just shoot for 1500 calories and only eat back some of my exercise calories on long ride days. It’s slow going, but working. It is also a point to consider about trying to maintain where you are. You may not mentally be happy with that, but your body might be. It could end up not being worth what it takes to get and *stay* at a lower weight now.”

She made a good point about how maybe my body is just where it’s going to be. I have been unhappy with where it’s at for months now. I’d gained 15 pounds and was struggling to lose it again. I’d lost about 5 of it, then gained it back. I had a lot of setbacks (several injuries, sickness, a dose of prednisone, some monkey-ing with medications that caused some weight gain) and was feeling very deflated about it.

Even though it was “only” 15 pounds, it felt significant to me. Clothes weren’t fitting properly anymore. The weather was getting nicer and I was preparing for a mini-vacation in Arizona and brought out all my shorts and tank tops and…nothing fit. Like at all. I had to go buy practically an entire new wardrobe and it depressed me. There were tears.

I went from a size 4 or 6 in shorts to a size 8. The small tank tops are now a medium. I was very unhappy about this and became determined to get it under control. Sure I wasn’t still GAINING weight but I wasn’t LOSING either.

This MIGHT be where my body is comfortable and just stuck. Perhaps. But I am willing to give it a try to see if I can change that. Even if I can only lose 5 of those 15 pounds I know it will make me a little but happier about my body than where I am currently at.

I told Michael about my plan to reduce my calories. He wasn’t very happy with the restriction and he was very sweet, saying, “I hope you know that you don’t have to lose weight for me.” It was unnecessary for him to say but it was good to hear nonetheless.

I went into this restriction with some trepidation but I was feeling determined and wanted to do it right. Sure I was reducing my calories quite a bit, but I wanted to make what calories I ate SMART calories. The portion-controlled guacamole was a good idea on my part. Sure I wasn’t happy about it being processed but like I said, it was portion controlled and pairing it with some celery was the perfect snack that filled me up.

I experimented with changing up my breakfasts and eating foods that were higher in protein (more filling) like cottage cheese, Greek yogurt and oatmeal. I tried my best to avoid eating frozen lunches and tried to eat real food instead. Baked chicken, salads, soups, etc. It wasn’t 100% but I did okay with this goal.

I tried to limit alcohol intake to Friday/Saturday nights only and only 1 glass. I also tried to be better about the dessert I ate: not eating it every night and making better choices (like a piece of chocolate with strawberries instead of high calorie junk). I also had fruit as dessert many times (this is easy for me to do when it’s berry season!)

I’m kind of sick of salads. I love salad and eat a lot of it, but it was becoming my lunch or dinner norm and I burned out on it.

Food prep is time consuming but VERY NECESSARY. Sure it takes a long time but spending an hour prepping the veggies for the week has saved me so much time and on evenings when I’m tired and hungry having that stuff already prepped helps me make better choices.

Tilapia! I re-discovered tilapia. We used to eat it frequently (usually as fish tacos) but then stopped and I don’t know why because it’s a great fish to eat when trying to lose weight. It’s about half the calories of salmon and is a good choice for low-calorie lunches or to pair it with some rice or quinoa for dinner.

I went back to measuring my portions. I’ve written about this topic a lot because you can track your food and do everything “right” but if you aren’t REALLY measuring your food you have no idea how many calories you’re taking in. I measured portions diligently to lose weight and then periodically throughout my 6+ years of maintenance I would go back to measuring. Basically to “check in” and remind myself what a portion was. It’s easy to slip back in bad habits.

I think this was part of my problem this past year. I was eye-balling portions because I’d done it for so long and “knew” what a serving was. But in reality, things were a little off. Clearly! The biggest shocker? I made a bunch of quinoa for lunches and dinners and measured out a serving using my food scale and my eyes bugged out of my head. Wait, what? THAT’S 200 calories worth of quinoa?!? Holy cow, I was eating twice that! For a long time. It was a good wake up call and a good reminder that I had slipped back into lazy habits. Read these old posts for more insight:

C is for Calories

M is for Measuring Mistakes

How to Count Calories

So I’m back to measuring almost everything. I use the food scale primarily because sometimes you can’t trust the label. Remember this post I wrote about misleading labels? If not, read it now. You will be shocked and want to immediately buy a food scale. 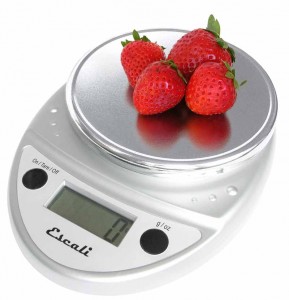 I was making progress that first week and that boosted my motivation. Seeing immediately changes like losing 1 pound after a week of the new diet made me feel better about what I was doing. Before I felt like I was denying myself things I wanted, restricting, but not seeing ANY CHANGE on the scale. That SUCKS.

I’m going to continue what I am currently doing for a little while longer and see if it keeps working. I don’t know that I can reduce my calories any lower, so this is it. Stay tuned!