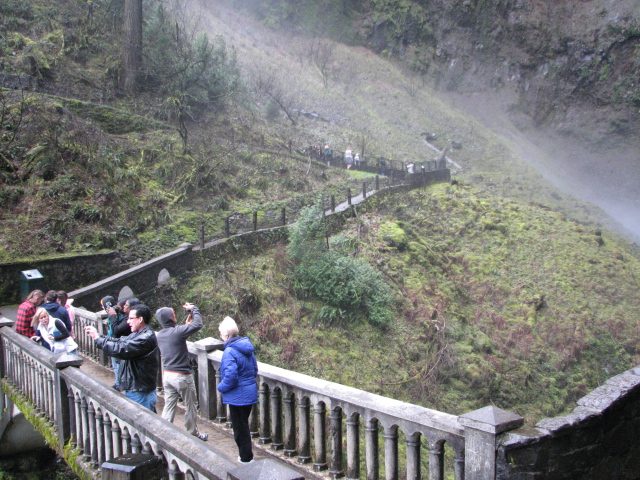 After I had the great workout in the gym, Michael and I grabbed burritos and brews at Laughing Planet. I was famished after burning over 800 calories.

I ordered the Southwestern Burrito: cheese, brown rice, corn, onions, green chilies, salsa, sour cream and guacamole. 700+ calories. It was a gut-bomb but delicious. I had one Ninkasi Tricerahops (awesome beer).

We both wanted to go for a hike on Saturday but the weather was solid rain ALL DAY. That’s why I’d headed to the gym. Well when we were enjoying our burritos the sun was out, bright and shiny, no rain. What a scam! Michael suggested we go for a hike anyway. If it ended up raining, we could take rain jackets with us. The clear skies promised a good hike. So despite us both already having our workouts out of the way for the day we agreed to give a hike a shot.

The perfect hike for the winter time is Multnomah Falls. It’s paved and not muddy. Plus it’s (usually) less crowded in the off season. The first winter Michael and I were dating we hiked Multnomah Falls several weekends a month to build up our hiking fitness. It was a great barometer for our abilities. We were hiking it so much we knew when we were getting better at it by comparing our time each time we hiked it.

Multnomah Falls is a unique hike. It’s classified as “moderate” in difficulty because it’s short. It’s a mile to the top of the falls–a short distance. But it’s STRAIGHT UP. The elevation gain is pretty drastic. It’s not uncommon for us to see out of shape hikers having to be escorted back down the trail (this has happened several times…hikers taken back down by wheel chair or stretcher).

It’s also a tourist trap. It’s right off the freeway and a destination spot for out of towners. I see the weirdest people hiking up The Falls: in flip flops, (the girl today in high heels), people pushing strollers up the trail. What a grueling way to enjoy the falls.

Michael and I dodged the novice hikers (in high heels) and then the rain started. 🙁

We stopped and put on our rain jackets then continued up. We stopped to rest at the half way point. We were both huffing and puffing.

Here is a photo of the Oregon flower: moss. 🙂

I was surprised how challenging Multnomah Falls was for us. Granted we haven’t hiked much this winter, but Multnomah Falls is like the Thing That Must Be Conquered! Especially for me. I remember the first time I attempted to hike it. I was probably around 200 pounds at the time. I drove out to the Gorge by myself on a sunny day and I was barely able to make it to the half way rest point. I was dying. I was so out of breath I could barely breath. I ended up turning around and going back down; I never even tried to go the rest of the way. It wasn’t until I lost about 40 more pounds that I tried it again and made it to the top! That was a great day!

Back to Saturday: with the rain gear it wasn’t too bad for awhile. Once we got to about 3/4 of the way up the trail the rain got intolerable. It was just dumping on us. Michael and I looked at each other and then decided to turn back down. We still had grocery shopping to do and neither of us wanted to do it soaking wet. Multnomah Falls will have to be completed another day.

It was nice to get out there after such a long hiatus from hiking (in Oregon at least). I spent the rest of the evening watching “The Ghosts of Girlfriends Past.” It was a really cute movie.

QUESTION: What is something you want to conquer?