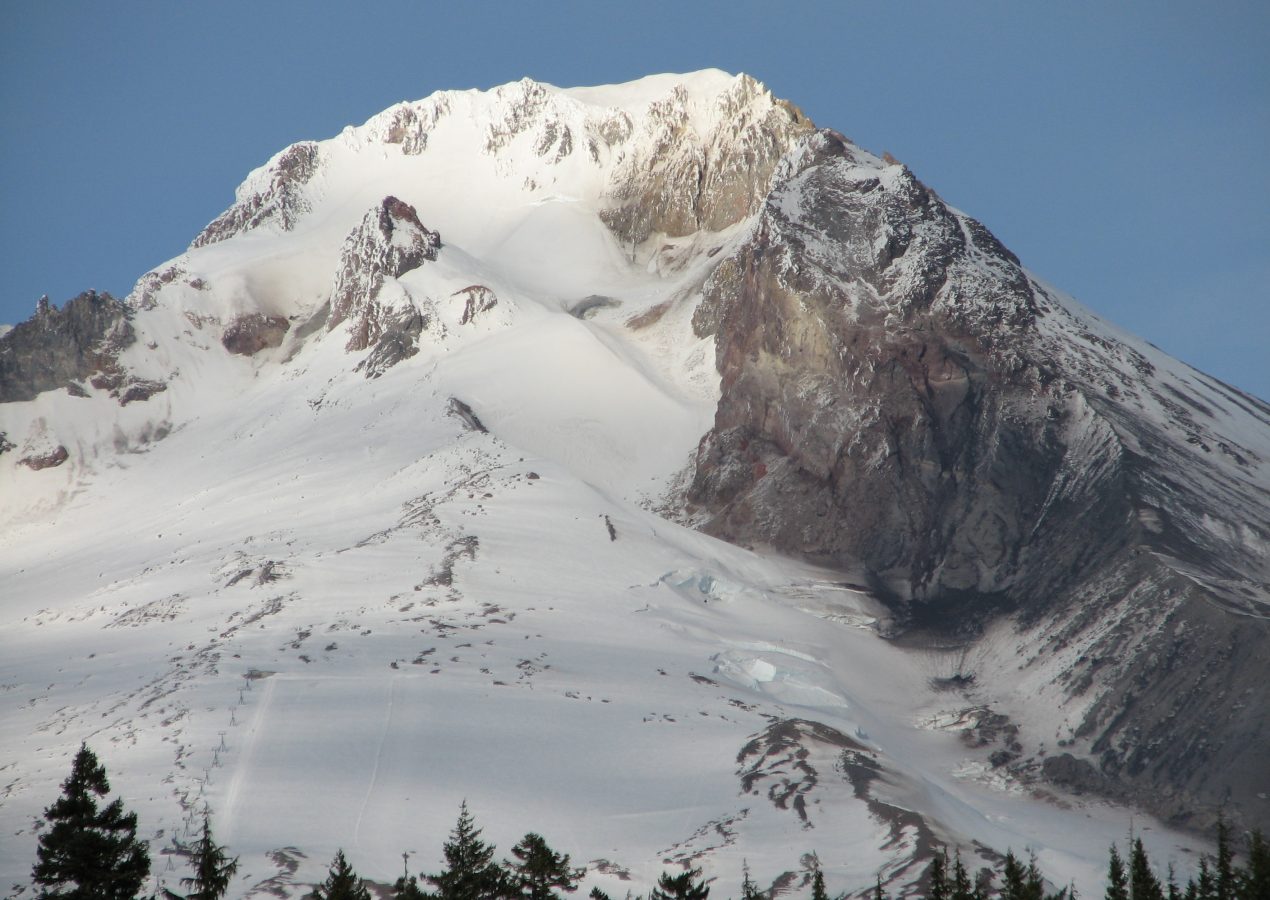 On Christmas Eve, Michael surprised me with a small breakfast in bed and then we hit the road for an adventure. We drove up to Mount Hood to do the first snowshoeing of the season. No matter how many times we drive up to Mount Hood, that first view of the mountaintop after we turn the corner of Vertigo Corner is breathtaking.

The original plan was to do Mirror Lake. Unfortunately, Mirror Lake is pretty low in elevation and hadn’t received much snow yet.

The back up plan was Frog Lake. It was just on the other side of Mount Hood and it was one we’d never done before. Frog Lake supposedly connected to both Barlow Pass and the Pacific Crest Trail. I asked some snowshoers who were coming back if the trail was okay. They said it was alright, that there wasn’t a lot of snow but it was still enjoyable. I decided we’d give it a try and hope for the best.

We did some of the Twin Lakes Loop here. The tree cover was heavy and the snowfall wasn’t much.

I’m not sure how far we trekked into the woods at Frog Lake but the higher we climbed, the less snow there was. In fact, we turned around when the snow completely disappeared from the trail. It was a bit disappointing.

I think part of the problem is that there hasn’t been much rainfall here in Oregon this last month. It’s been one of the driest winters that I can remember (which I’m loving!) but of course that means not a lot of snow. I made the executive decision to turn around and go somewhere else.

It didn’t take long to get back to the car.

We drove back up the Mountain and went to the tried and true spot: Trillium Lake.  By this time it was 12:30 and we were both hungry so we ate our lunches before setting out on the trail. I’d bought us Subway–easy and transportable.

Trillium Lake starts with a steep downhill climb that provides endless amusement when beginner skiers attempt to maneuver the curves.

We got to the bottom of the hill and took a right. It was a gorgeous day on the mountain! The sun was out, there weren’t any clouds in the sky and the temperature was pretty warm. It was warm enough that we didn’t need our gloves.

We got to the clearing that is the most picturesque spot of the mountain. There was some cloud cover over Mount Hood but it was still a beautiful sight to see.

After taking some photos we tromped across the open field and came to another fork in the trail. We usually continue on to the left toward Trillium Lake. This time we went right to Barlow Pass. It was a slight but constant uphill trail, passed some cute little cabins nestled among the trees and snow.

We stopped to rest and drink some water further up a bit. I think it was a campground in the summer time.

We decided to turn around and head back to the car. We’d been snowshoeing for about 45 minutes at this point. That’s a good number to turn around at–especially for our first time out of the season. Snowshoeing an exhausting activity that tires you out pretty quickly–usually without noticing it.

The sun was bright and warm. It was probably the best weather we’ve ever experienced on Mount Hood. The temperature was around 45 degrees and there was no wind. Perfect!

The climb back up that huge hill to the car is long, tiring and hard work. My heart rate increased to almost 160 beats! Trust me, it’s a killer.

There was hardly anyone on the mountain on Christmas Eve either–it was nice and peaceful. When we got back home I hopped in the shower for the best shower of my life. Standing underneath that scalding hot water feels amazing after tromping through the snow!

I am so glad we were able to get up there and do something fun and active in snow.

QUESTION: How did you spend Christmas Eve? Have you ever been snowshoeing before?

How Much Food Do I Really Need?