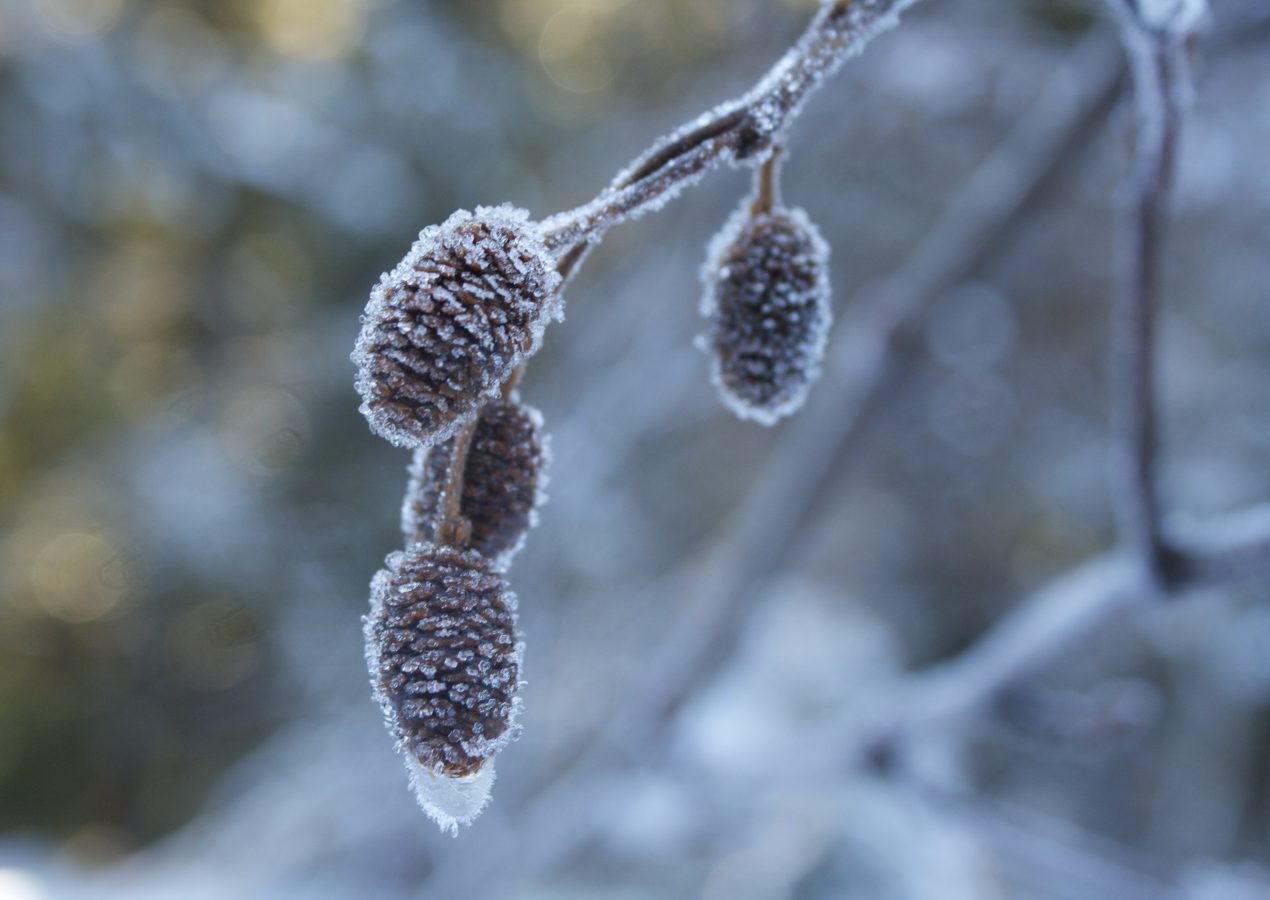 Sunday morning Michael and I ate a hearty breakfast (splitting a bacon and cheese omelet) and scampered up to Mount Hood to take advantage of the snow and the sunshine. We decided to do the Crosstown Trail not far from Government Camp.

Glacier View was a downhill ascent into the trees and over frozen creeks. It was quiet out there and we didn’t see a lot of people. I think the other snowshoers we’d seen at the Sno-Park found the correct signage and took the right trails. Oh well!

The weather was gorgeous on Sunday–sunny, clear skies and pretty warm for being January. There’d been some recent snowfall and the snow was light and crunchy under our shoes.

We kept going downhill and eventually we turned a corner revealing a small view of Mount Hood. It looked gorgeous: white and majestic against the clear blue sky. It was partially obscured by the tall trees.

We trekked through clearings and dodged naked trees amongst the huge pines. Kinda spooky, huh?

Eventually we got to the end of the trail. I thought it was a loop but we were literally at the end–with Highway 26 below us! We turned around and backtracked.

It was a MUCH better workout heading back–it was entirely uphill. My heart rate stayed in the 145-150 range for the climb up.

Half-way up the hill, I saw a sign for a short 1/2 mile loop called Kurt’s Konnection. In fact, we’d parked our car in the Sno-Park right in front of the beginning of Kurt’s Konnection. I suggested we take that route back to the car instead of backtracking. The trail went off the main trail and immediately went downhill again.

We descended into the forest and trekked along uneven terrain that hadn’t had  much traffic on it lately. It was clear that there was a trail there, though, so we confidently forged on.

We trekked along the trail that weaved through frozen, bare trees and we were dwarfed by the humongous evergreens that drooped with snow.

The trail leveled out and we hiked along a creek on a narrow ridge. We got to one section of the trail and realized we had to cross over a frozen creek. There wasn’t a clear trail here and our steps were tentative. Michael heard the sound of ice cracking underneath him but we made it across the narrow creek okay.

The trail got super sketchy at this point. I couldn’t see the continuation of a clear trail OR footprints. Not only that, there was yet another frozen creek except it was much bigger and more difficult to get around. There were steep parts, uneven parts and Michael didn’t think it was a good idea. I said, “Let me put my camera away”–wise words. I put my camera safely back in the bag and then took a step. And tripped. And fell. I got back up and brushed the snow off, but we decided that it was time to turn around.

It had disaster written all over it. The last thing either of us needed was to end up in a creek and get hypothermia 3 miles from the parking lot. We headed back up the path to the main trail and then back to the Sno-Park.

Michael estimated we did about 4 miles total, I think it was probably like 3. There’s really no way of knowing, though, with all the backtracking we did.

It was a beautiful day and a really fun way to exercise. I’d skipped my swim at the gym and spent a wonderful day with Michael instead. After we got back to the car, we ate our Subway sandwiches and drank iced tea before heading back down the mountain. What a day!

QUESTION: Are you a skilled “backcountry” hiker/skier/snowshoer? Do you have a GPS device for hiking?