Long holiday weekends are usually when Michael and I go out of town or go for long bike rides (weather permitting of course) neither of those things happened for Memorial Weekend. I was definitely disappointed that I couldn’t do things like that. My therapist tells me I need to grieve about my injury and then try to find other things that Michael and I can do together that we enjoy. That ended up being a combination of fun things and chores that actually turned out to be fun.

On Saturday after my workout, we went out to lunch at Shut Up And Eat. We were both craving sandwiches (me because I hadn’t really eaten bread very much in the last few months) and Michael wanted to break the gluten-free thing for a bit. 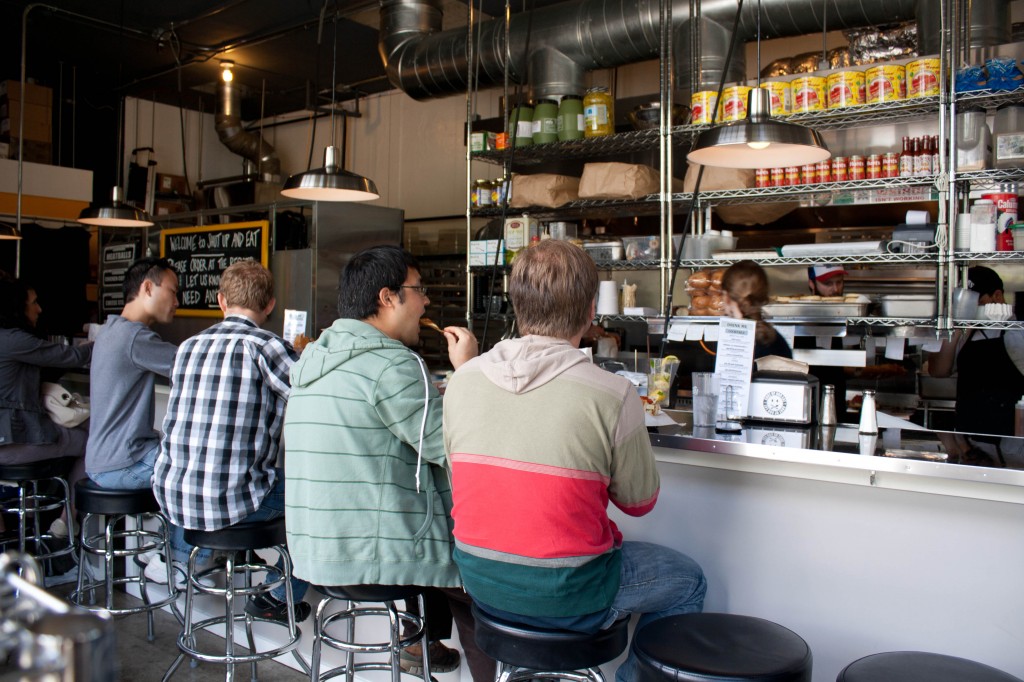 Shut Up and Eat ended up delivering one of the best sandwiches I’ve ever had in my life. That is not an exaggeration. I can think of two other sandwiches I’ve had that were so good, I’m still thinking about them years later. One was a pesto and mozzarella panini from The Blue Pig Cafe. The other was also a panini but it was from one of those upscale theater pubs in downtown Portland. 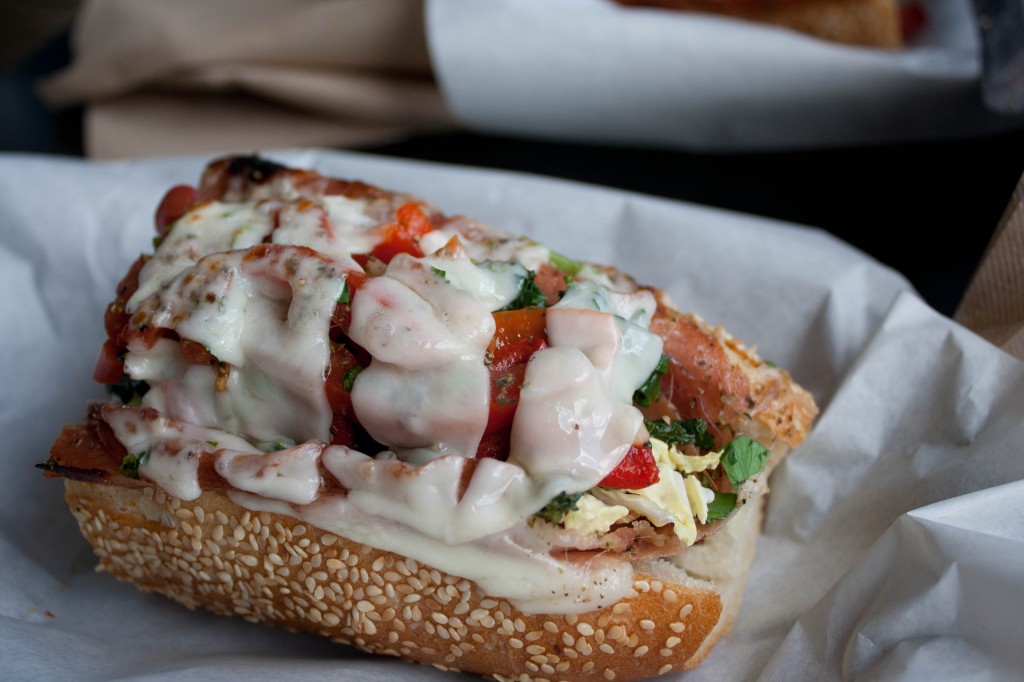 Michael and I split the Italian Grinder sandwich. It came on a sesame hoagie roll that was soft and easy to bite into, but it was a messy sandwich. It had some olive oil and vinegar, Italian meats, rapini, lettuce, Mama Lil’s Peppers (my favorite thing ever) and topped with melted mozzarella cheese. It also came with homemade potato chips. Wow! 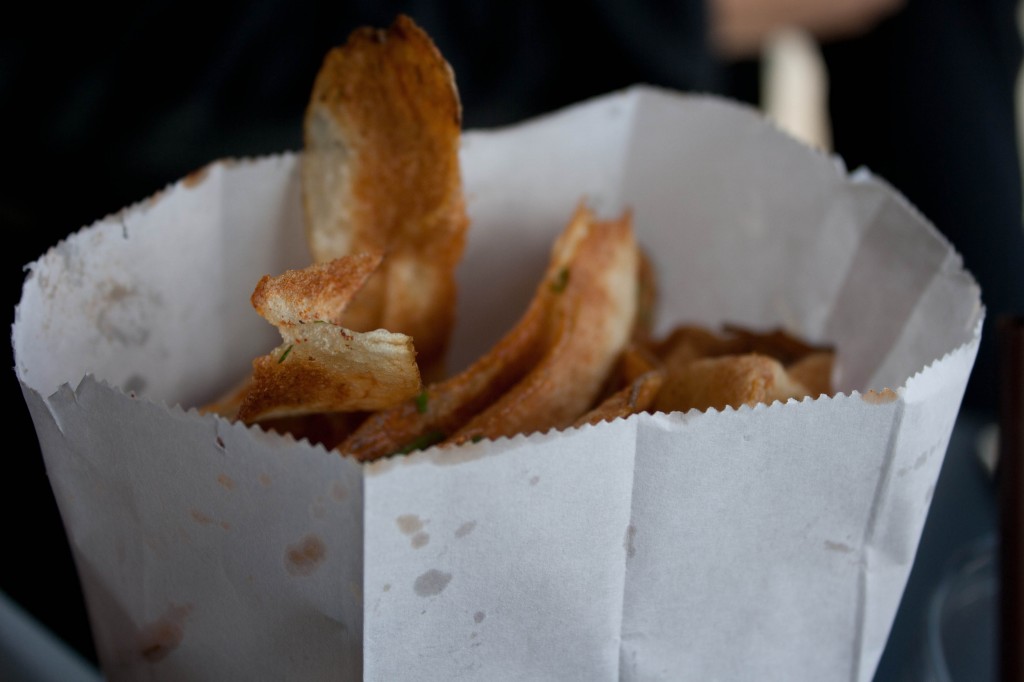 Thank goodness we split that sandwich. Shut Up and Eat is somewhere I will take out of town guests because it was that stinkin’ good. The only downside was that the place was packed and the seating was awkward and difficult to come by. 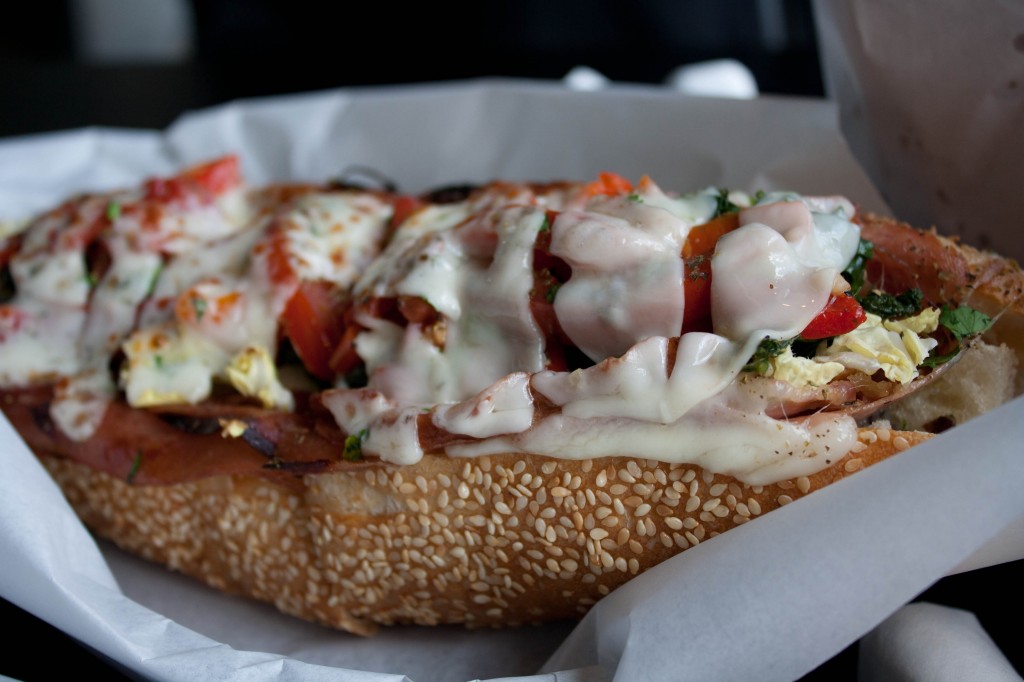 After that we ran a bunch of errands before going over to his stepsister Julie’s house for her birthday luau. She had pulled pork, chicken, macaroni salad, rice, lots of fresh pineapple and strawberries, Hawaiian rolls and some kind of crispy Asian chicken roll.

She also had a pineapple juice, 7-Up, Coconut Vodka punch that was DANGEROUS. That was happy juice that was way too easy to drink too much of! It was delicious, though. I had a glass and a half and tried to imagine myself on a beach somewhere. 🙂

On Sunday Michael and I met up with some friends for brunch. It was so nice to see Chris and Tiffany after so long. Our schedules just haven’t meshed well. The rest of Sunday was spent cleaning out the garage. It’s a total nightmare. Not entirely our fault. A lot of the stuff in there is construction materials we needed and will still need to finish remodeling the house. There’s flooring, baseboards, doors, lots of paint and various tools, and cabinets half built or waiting to be built. 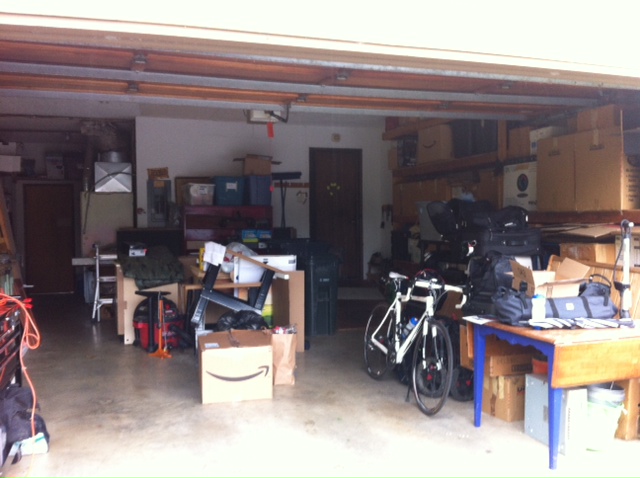 When I moved in with Michael 4 years ago, I put a bunch of stuff in front of the wall of boxes intending to go through them, get rid of things, unpack stuff, etc. And then it just sat there. For 4 years. And every day I’d walk by it it would make me crazy that I still hadn’t gotten to it! 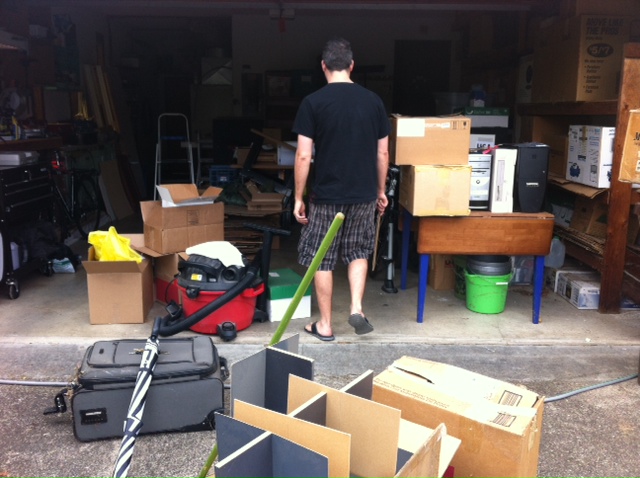 Michael went through a bunch of his boxes and got rid of stuff and made room for some of my boxes of “to keep” items. We cleared out a ton of crap! It’s all being donated to the Vietnam Veterans of America. It felt so awesome to get rid of STUFF. I think we’re getting rid of about 10 big boxes worth of random stuff–kitchen items, old house stuff, books, VHS tapes that are pretty much worthless, furniture we don’t need…It’s not done yet. I think we’ll get it finished completely next weekend. And I’ll post an “after” picture of our spotless garage!

By the time we called it quits for the day, we were both dead on our feet. I was exhausted and starting to feel cranky (I hadn’t eaten enough at brunch) and neither of us wanted to cook. So we went out to dinner to a place that has turned out to be a hidden gem I will most definitely return to again and again. 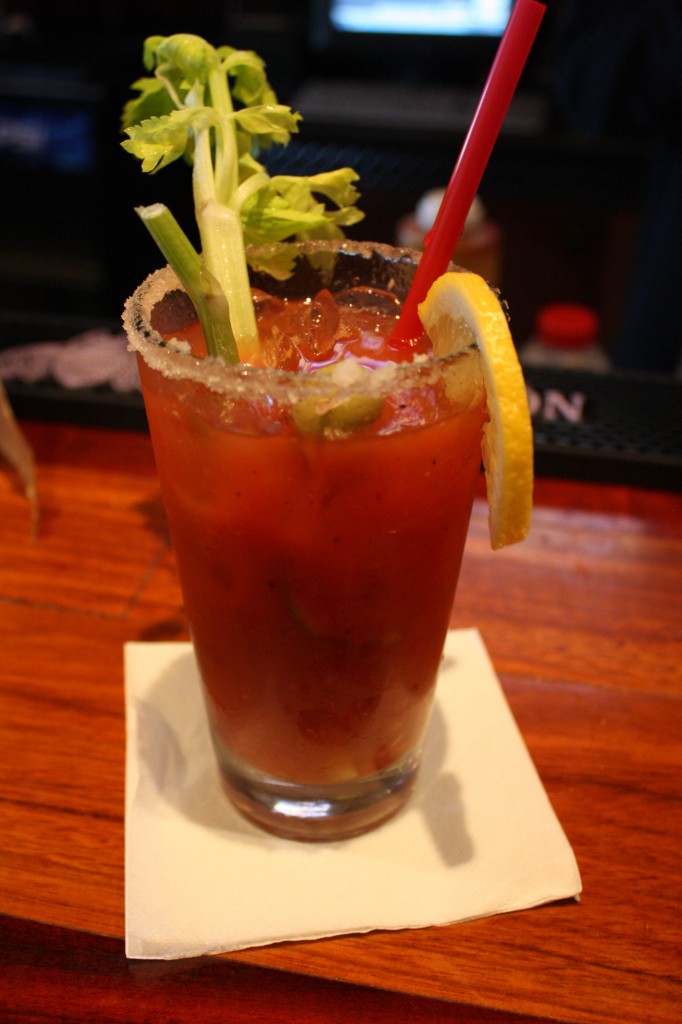 That beauty above is a Cajun Bloody Mary and it was the spiciest Bloody Mary I’ve ever had. It was AWESOME! We were at My Brother’s Crawfish for happy hour (which runs all day Sundays). I watched him make my drink–vodka, tomato juice, and a gob of horseradish. Wowza. Spiiiicy! 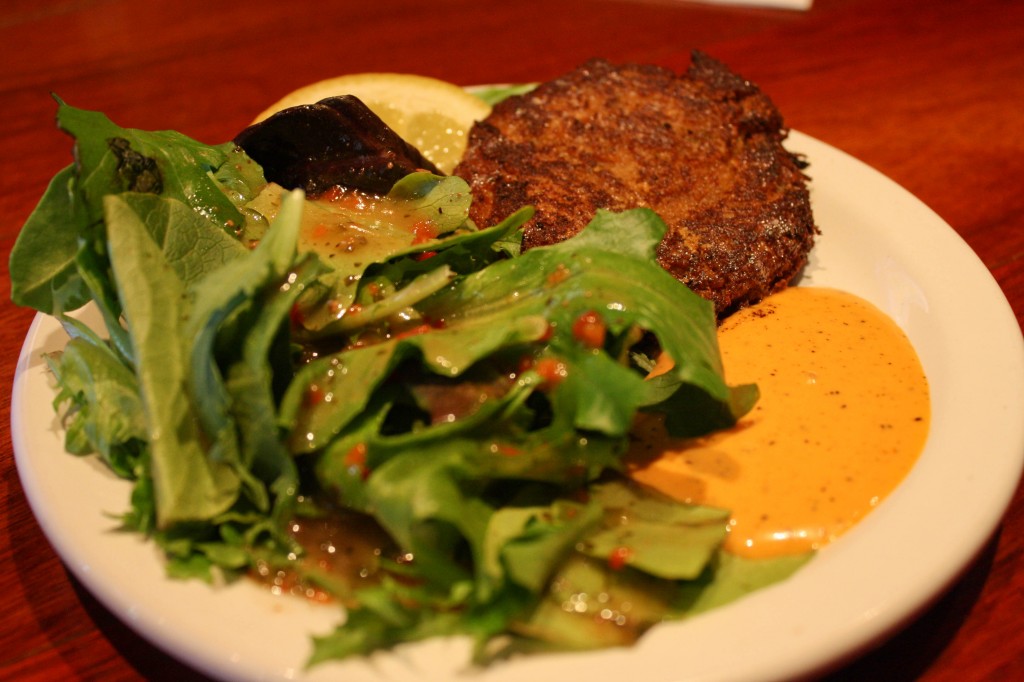 The restaurant is in an odd location–on 82nd Avenue in a strip mall between Asian grocery stores, Vietnamese restaurants and Pho joints. It was so out of place but I’m so glad we went. The above photo is the Dungeness crab cake. I didn’t like it but Michael did. I’ve had better crab cakes and the bite I had, I got some shell–not cool. I ate the salad. 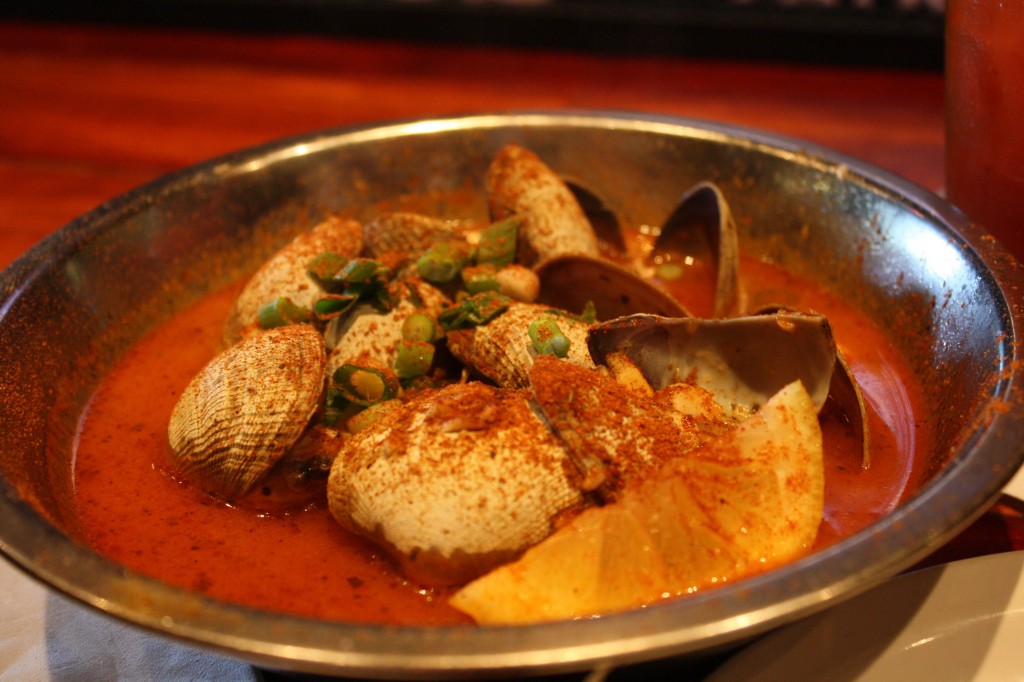 I ordered the Clam Boil. It was a bowl of clams in the spiciest sauce I’ve ever had–and I asked for “medium”! I cannot imagine how spicy the “spicy” would be. Too much for me, I think. There were about 12 or so in the bowl. It’s been ages since I had clams and they were the perfect amount of food.

Michael got the friend chicken strips. And then we split an order of Hush Puppies. 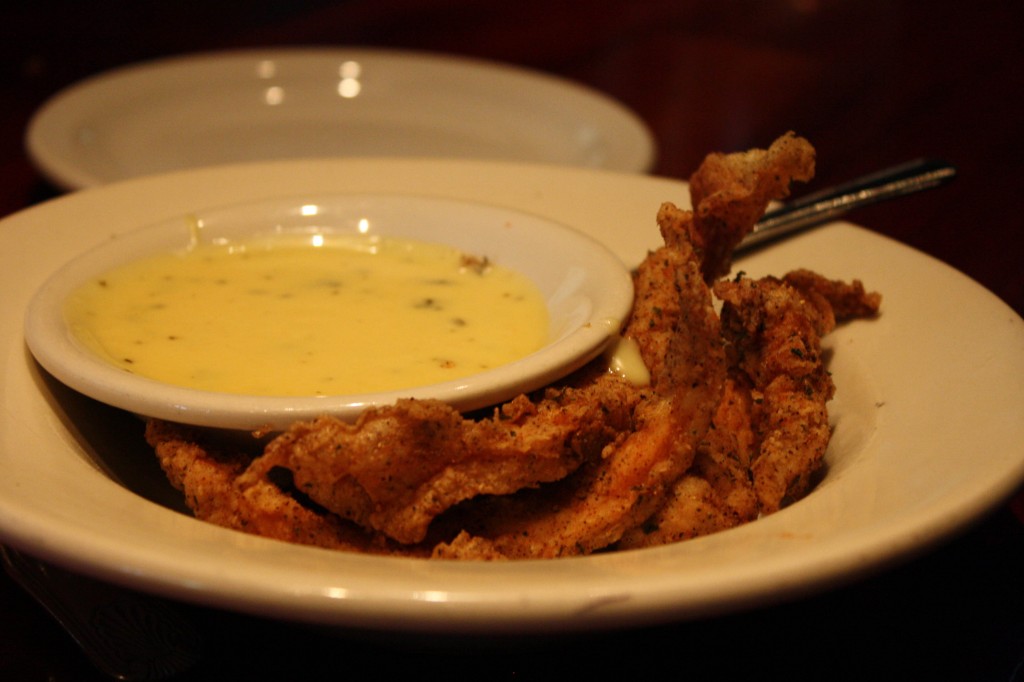 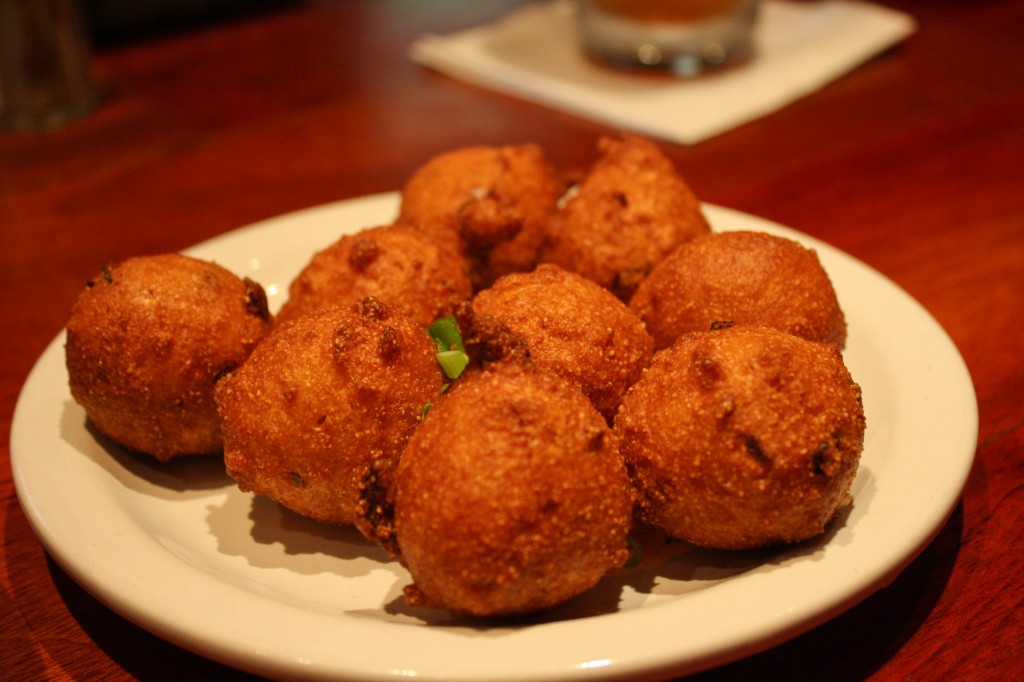 I don’t know what kind of dipping sauce came with the Hush Puppies (maybe mayo and hot sauce??) but it was addicting. The happy hour portions were also the perfect amount of food. I am totally going back to this restaurant. Just writing this post I’m wondering, is it OK to go back the next day for more??

It was a productive, busy, social weekend. By the time Monday rolled around I was ready to get more stuff done. We did a little bit in the garage after I got back from the gym but I think the bulk of it is going to have to wait til next weekend (or at least until after our donation is picked up). I am so happy we decided to tackle this project. It feels good to purge unwanted stuff! And even better: my knees felt awesome ALL weekend long!!

QUESTION: How did you spend your Memorial Weekend?