On Sunday we started our day with breakfast at the Lodge restaurant. I was super impressed with what I picked and I am very excited about re-creating it at home. It was two roma tomatoes stuffed with pesto and egg! It came with bacon and potatoes and an English muffin. It was way too much food but I ate it all and little did I know that that was a GOOD thing…but more on that later. 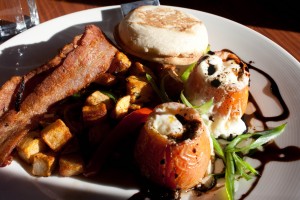 I loved every single bite of those tomatoes. It had a balsamic reduction drizzled on top of everything, too. So remember my last post where we had a slight brush with death on our way over Santiam Pass? Well the death-defying events continued into the next day. Okay, perhaps I’m being slightly dramatic BUT at the time it didn’t feel like it was overly dramatic.

We decided to go to Sisters and walk around for a bit before heading up to the mountain to do some more snowshoeing. There wasn’t a whole lot to do in Sisters, it was a good 30 minutes of walking and window-shopping and then we were done. It was after lunch at this point but neither of us were hungry. Breakfast had been huge, so we skipped lunch and went up the mountain. 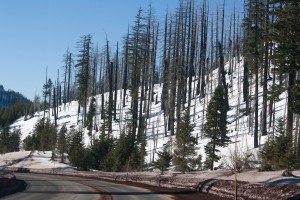 The first scary thing was another almost car wreck. Michael was driving around a bend and we saw accident flashes on the road. He started to brake but not too quickly and an on-coming car started flashing its lights frantically. Michael slammed on the brakes because we both realized the accident must have been immediately around the bend–and it was. The car started to fishtail again. Thankfully Michael fixed it quicker than the day before and there was no harm done. We drove right by the accident scene–a car completely smashed and upside down. So scary. I think I was holding my breathe the entire time. 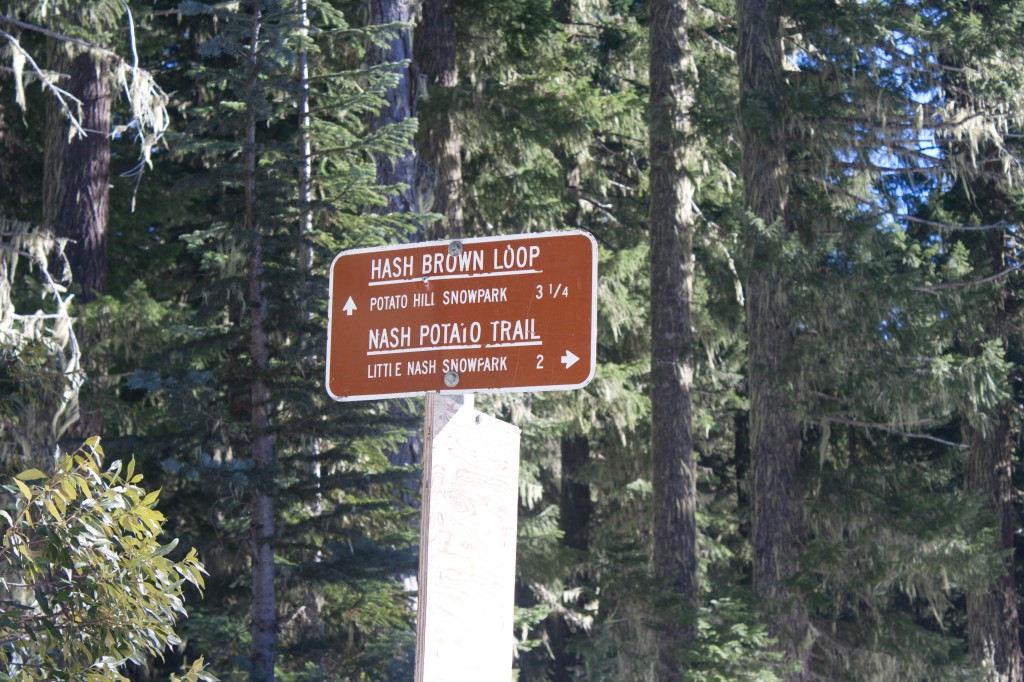 We ended up at Potato Hill Sno-Park. I forgot my snowshoeing book in the hotel room. Of course. I’m usually diligent about that stuff. We ended up doing more than we planned and more than we should have!  The trail out of the parking lot was steep and uphill. There wasn’t much to see yet, just a lot of big trees. 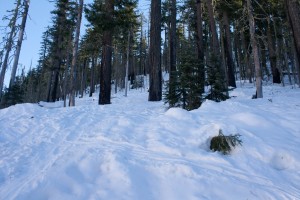 It was clearly a road that people drive on in the summer time. It was wide and easy. The snow was a little iced over, which made it harder for the snowshoes. We came to a fork in the trail. We could either go to the left–and up– or to the right and down. We decided to go down. 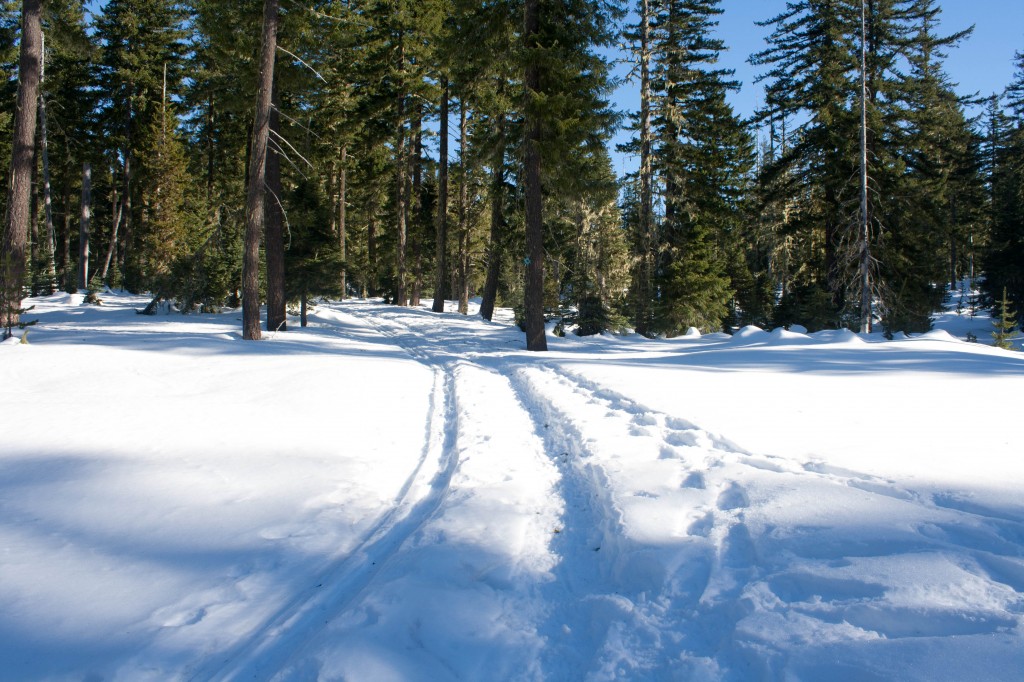 It was another warm, beautiful day. The air was crisp and cool, there wasn’t much of a breeze, and the temperatures were probably in the high 40’s. I was feeling really good and happy that my knees were allowing me to enjoy my birthday weekend snowshoeing! 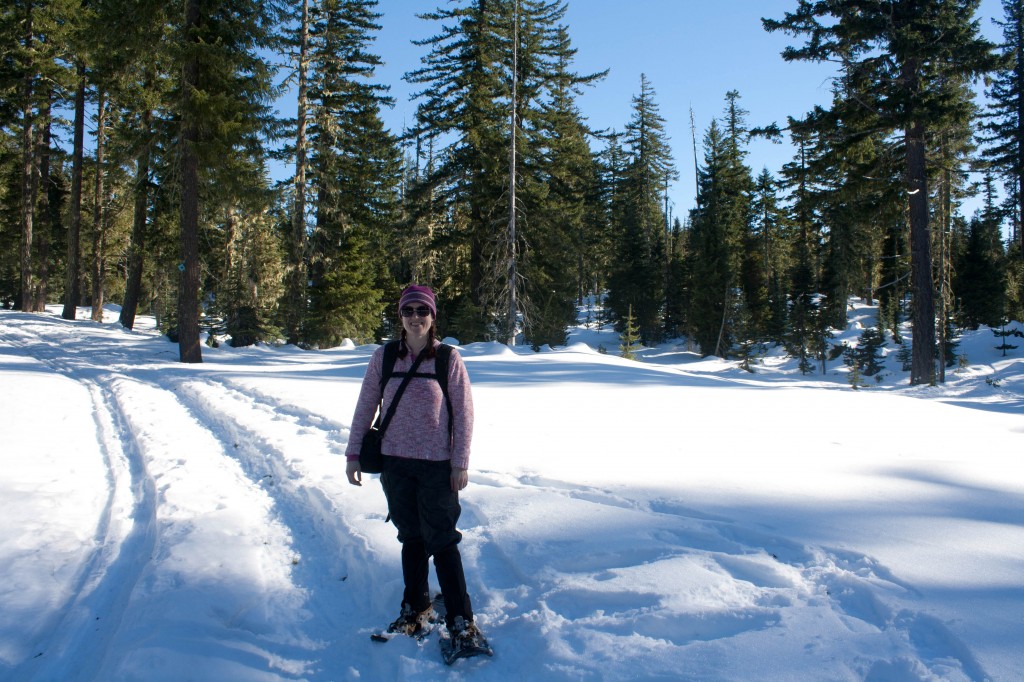 On this part of the trail, we never came across any other snowshoers. It was just Michael and me. It was the complete opposite of the crowded Ray Benson and we both remarked that it felt like REAL snowshoeing. 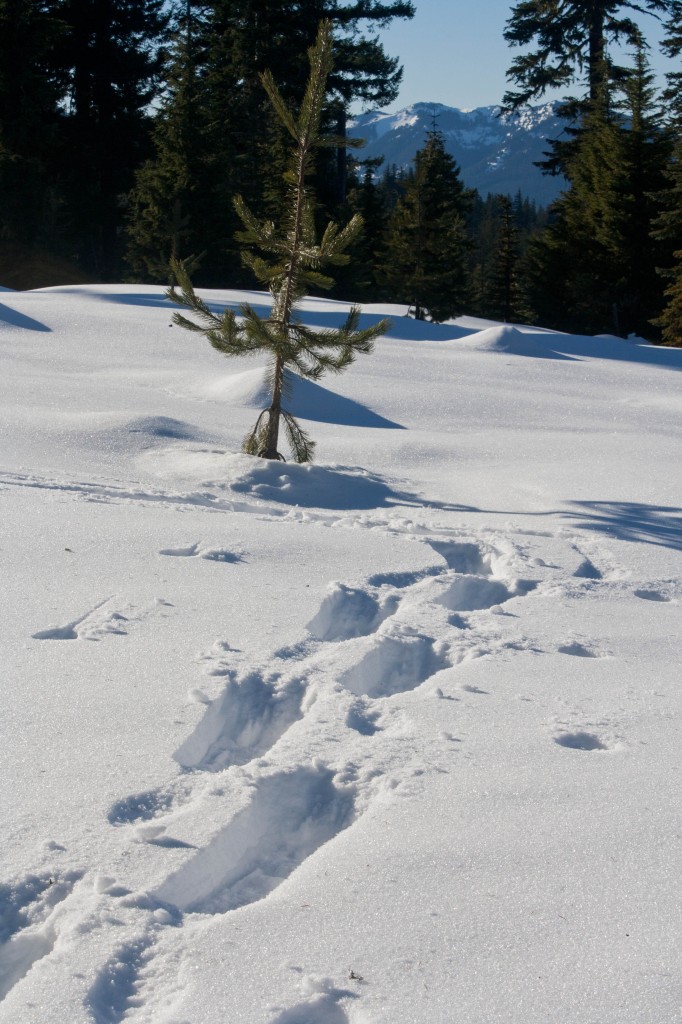 We made our way through the quiet snowy wonderland, marveling at how sparkly the snow was and how pretty everything looked. It was uphill for almost all of it, but it felt like it was gradual enough not to be too difficult.

About an hour and a half in, the trail started to dissipate. It looked less like a clearly defined road/trail and more like several sets of people had meandered around through the trees. Which way to go? Usually on snowshoeing trails there are markers on the trees. We kept our eyes out for the blue diamonds and also for the arrows. But arrows like THIS didn’t help: 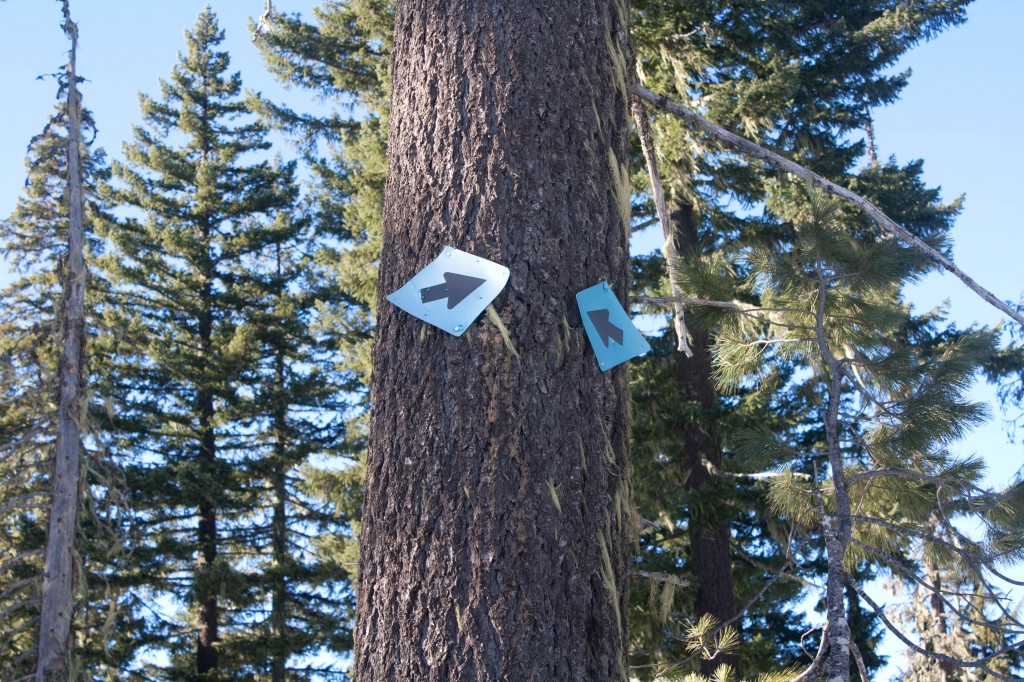 Hmmm thanks. Was some park ranger feeling punchy that day, or what?!?! I may not be great at reading a road map, but I’m usually pretty good at navigating my way back while hiking in the woods. I tend to look for landmarks and I never, ever deviate off the trail. I think that’s the quickest way to get into trouble in the wilderness!

However, when it comes to snowshoeing “backcountry” — I do not want to do that. I want a clearly marked trail (either with tracks in the snow or clearly marked trees) because it gets a LOT harder to navigate when EVERYTHING IS COVERED IN SNOW. 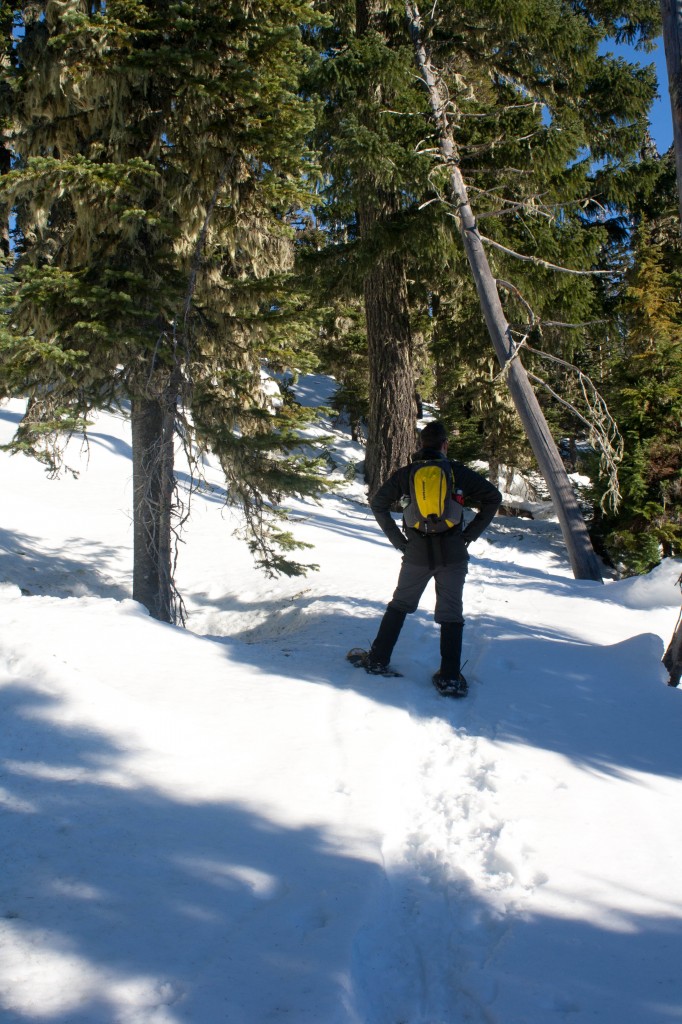 At this point, the clearly defined trail was gone. We followed the diamonds through the barely trekked snow banks, looking for other snowshoe tracks and definitely got turned around a few times. The trail was also pretty steep at this point. I don’t know if my photos are doing it justice but the incline was very steep–way too  steep for my knees. We took a wrong turn and ended up going up a huge hill before realizing we were off trail and had to go back down. 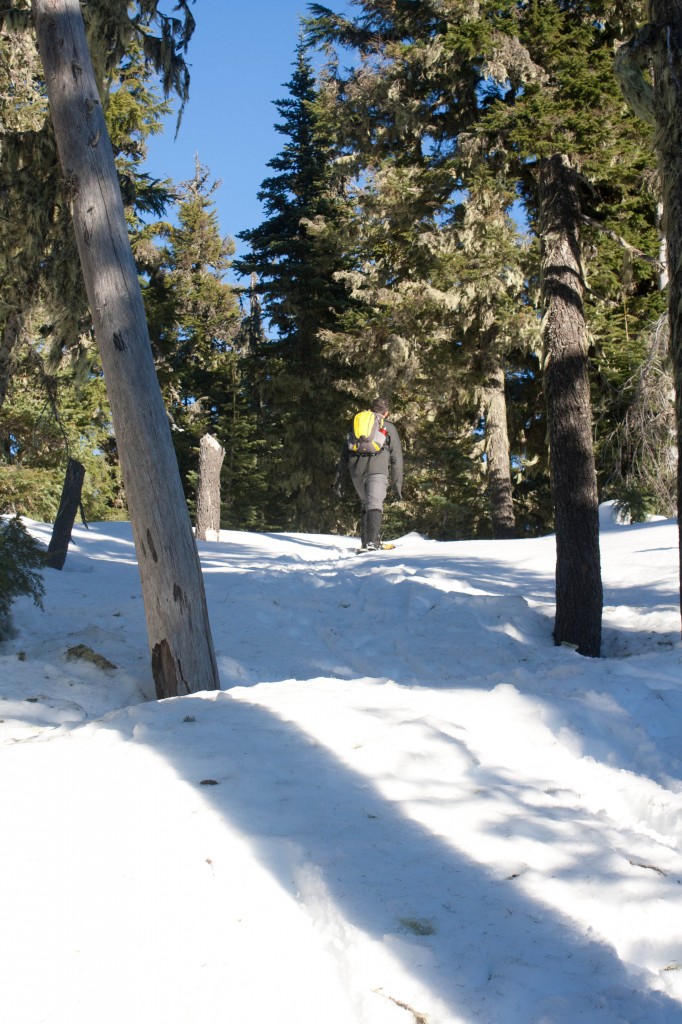 I’m not going to lie: I was starting to worry. We were having a hard time finding the trail that was supposed to loop us back to where we forked off. It was probably 3pm and the sun was still bright in the sky, but I figured we had about an hour and a half longer before the sun went down behind the mountains and it would soon be too dark to make our way back safely.

Remember how we had skipped lunch, too? Michael and I were both starting to feel lethargic. Our energy was waning, and I admit: I was starting to feel a little desperate. I didn’t want us to be lost in the woods, I was feeling despair about losing the trail and I was worried that my knees wouldn’t hold up. They were definitely starting to hurt. 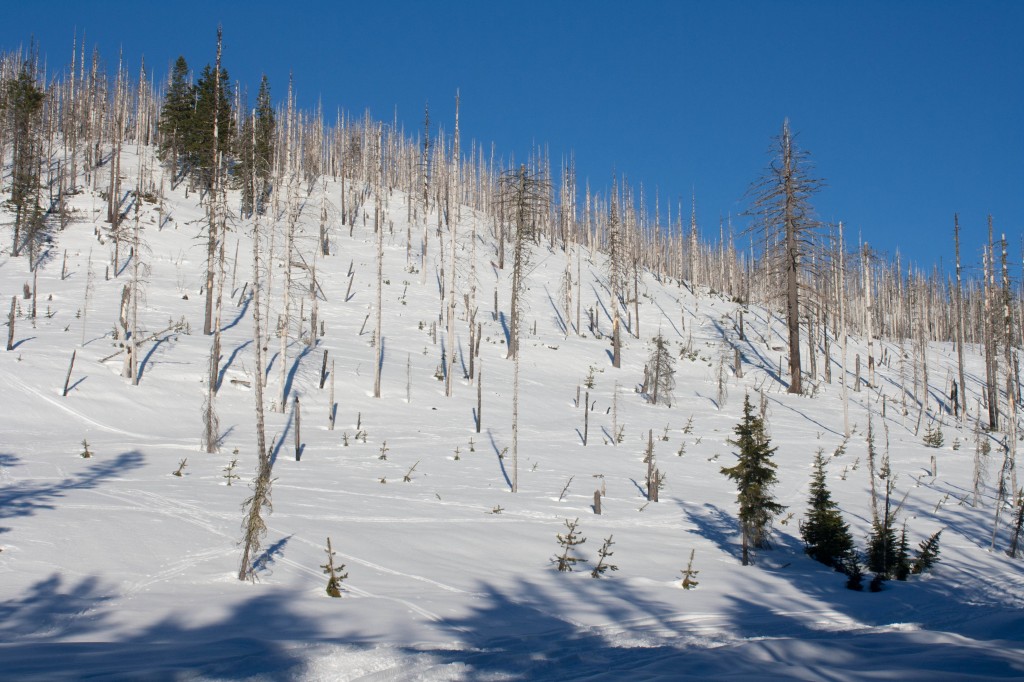 Michael tried to make jokes, saying that it was the third time we’d almost died that weekend. He said “Stop trying to kill us, Lisa” but I wasn’t really feeling jovial at this point. I pulled out a very old package of Powerbar Strawberry Banana chews and we split the bag. It was the boost of sugar that we definitely both needed to get a second wind.

Finally, we made it to the top. It was literally the summit. We couldn’t get much higher than where we were. We saw a diamond on the tree! YAY! We’re on the trail again! AND we saw the main road. 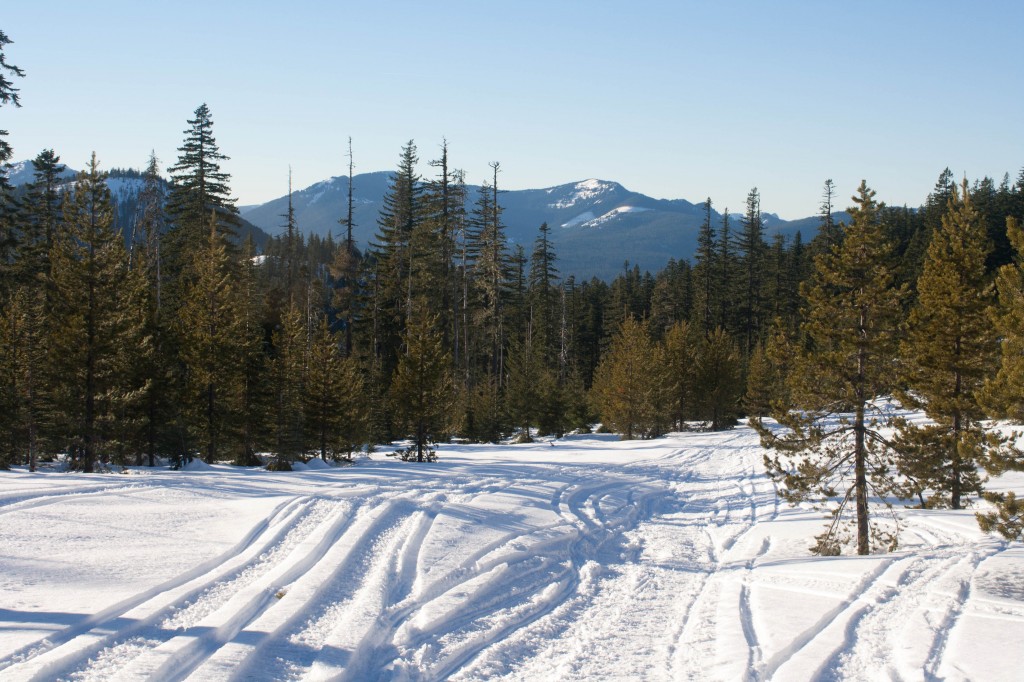 We followed the rest of the trail back to the main road and it was almost completely downhill. My knees were not feeling too great at this point. I was starting to worry that I’d undone all of the progress I’d made the last few months. 🙁 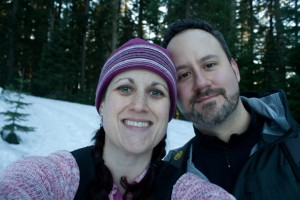 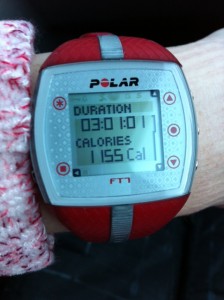 On the drive back to the Lodge, we hit ANOTHER patch of ice. This time it was on the single lane bridge crossing the river into the Lodge’s parking lot. Thankfully the car just skidded a little and didn’t crash into the bridge. But come on! I wanted to yell at the Universe “Seriously?!?!?!” I mean, Michael is a really good driver. It’s not like he was driving recklessly in the snow!

Back at the lodge I looked up Potato Hill in my book and it was classified as “easy” –easy my ass!! The elevation gain itself was not easy and I’m in pretty good shape! We limped our way to the wine social at the Lodge. 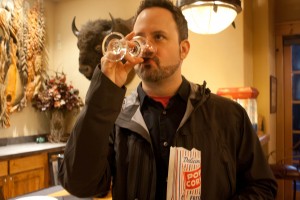 Dinner reservations at the Lodge restaurant were next. I got a salad with blue cheese, cranberries and walnuts on it as well as the red pepper soup. Michael got ribs and I had one of the small ribs. You would think that skipping lunch and snowshoeing for 3 hours and burning 1100 calories would make me famished. It did not. The opposite happened: I had zero appetite. I at my salad,the rib and half of the soup. I just could not force myself to eat any more. 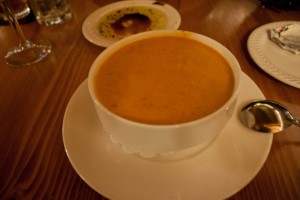 Thankfully our day ended with massages. Mine was included in the weekend package, which was nice. I think the massage helped lessen some of the damage done that day!

Despite getting slightly lost in the snow, it was a good day. Michael said the snowshoeing at Potato Hill was his favorite part of the weekend. Is it weird that my favorite part was that stuffed tomato for breakfast??

QUESTION: Are you good at navigating?