I’ve wanted to try Kenny & Zuke’s for years–the super cute, New York style deli was on my walking route for my lunch hour at work. It was always packed when I walked by there and I’d heard nothing but “these sandwiches are epic”–in portions and quality. Fast forward a few years later and I got the opportunity to taste test K&Z’s at a Yelp Elite event. That sealed the deal: as soon as I could, I wanted to try that pastrami sandwich.

Michael and I are officially celebrating our anniversary next month with a mini weekend trip. But to have a little date night celebration, we went to Kenny & Zuke’s for happy hour before going to the new cycling exhibit at the Portland Art Museum.

The place was half empty, which was a nice change from their overflowing lunch hour. I wasn’t very impressed with the service I got. The waiter seemed really disinterested in serving us, walked by the table a million times without greeting us or making eye-contact. It was just annoying and kind of soured the experience for me. He was clearly grumpy or unhappy about working there–who knows. Disappointing to say the least.

Despite the lackluster service, the food was spectacular. We ordered off the happy hour menu and split the pastrami sandwich on rye with Russian dressing. That was it–no lettuce, nothing fancy, just a pickle on the side and to-die for meat that was soft and almost like bite-sized bacon pieces. 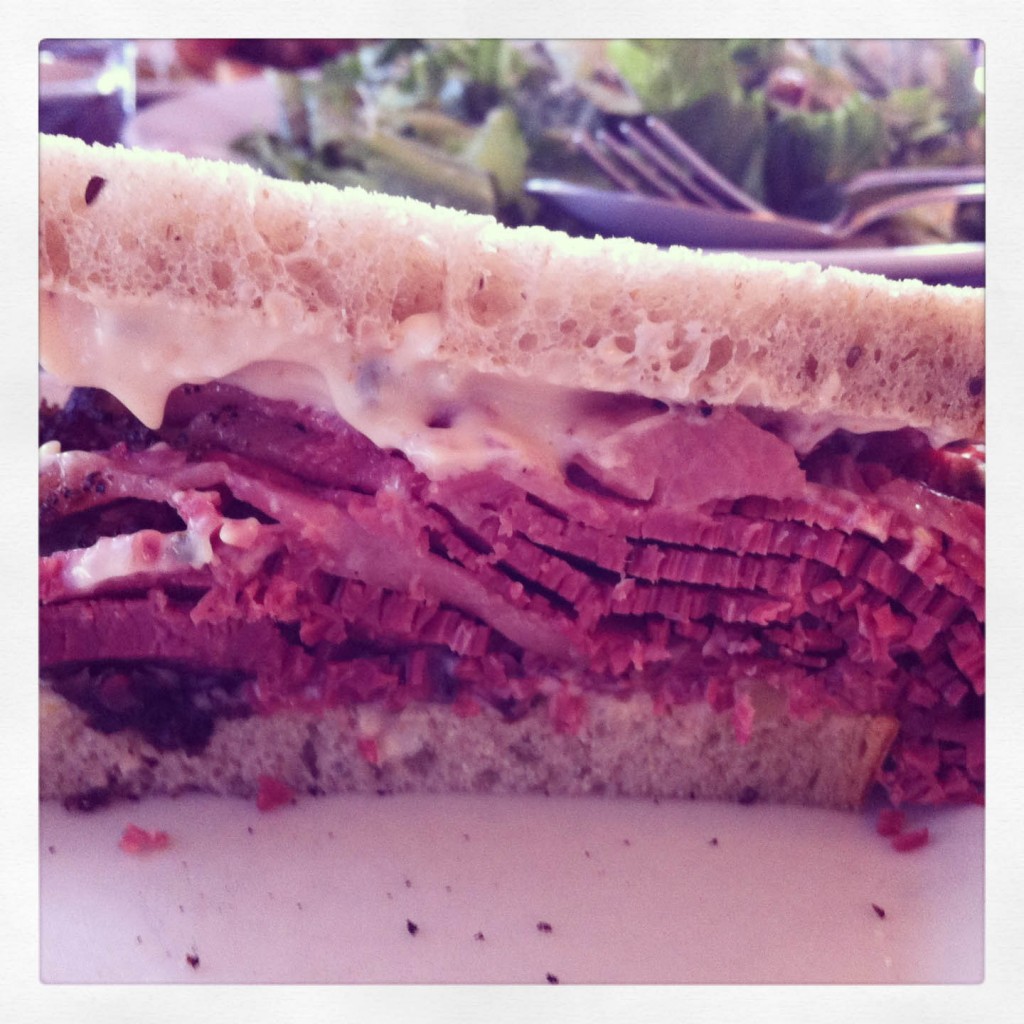 Thank goodness we split it! I was happy with the portion (splitting) and I did see that the regular menu had a “lighter” version of the sandwich. We also split a happy hour order of the Caesar salad. I also had an Ninkasi IPA with dinner. It’s been ages since I’ve had beer. I’ve been sticking with wine or vodka lately (less calories). 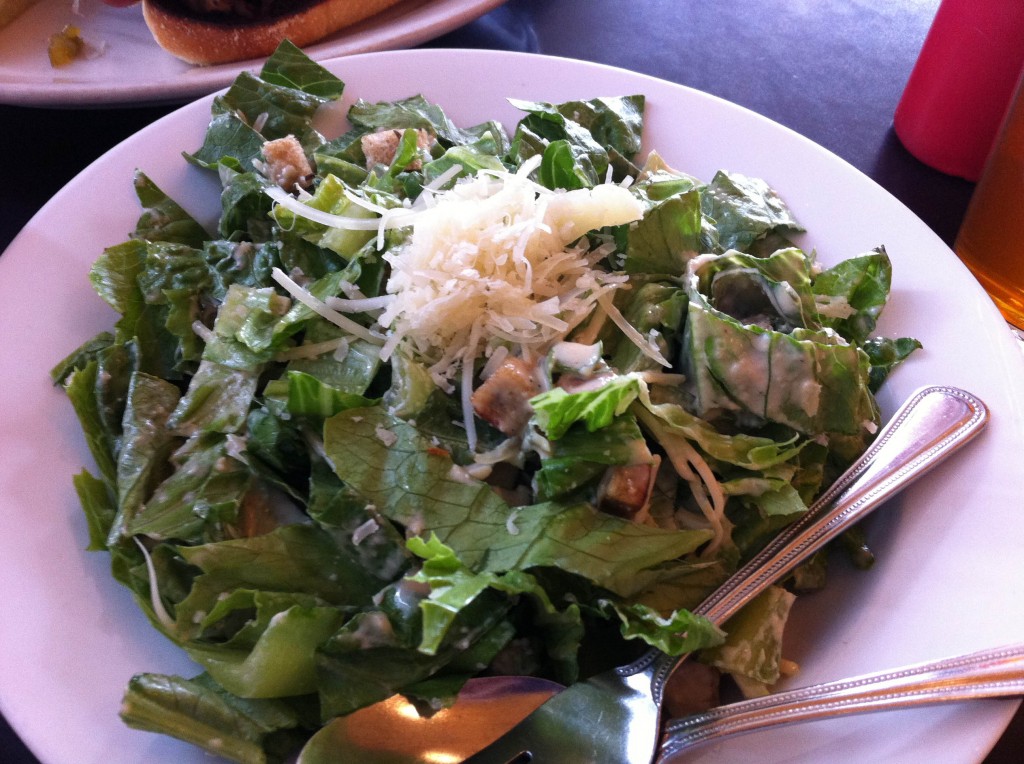 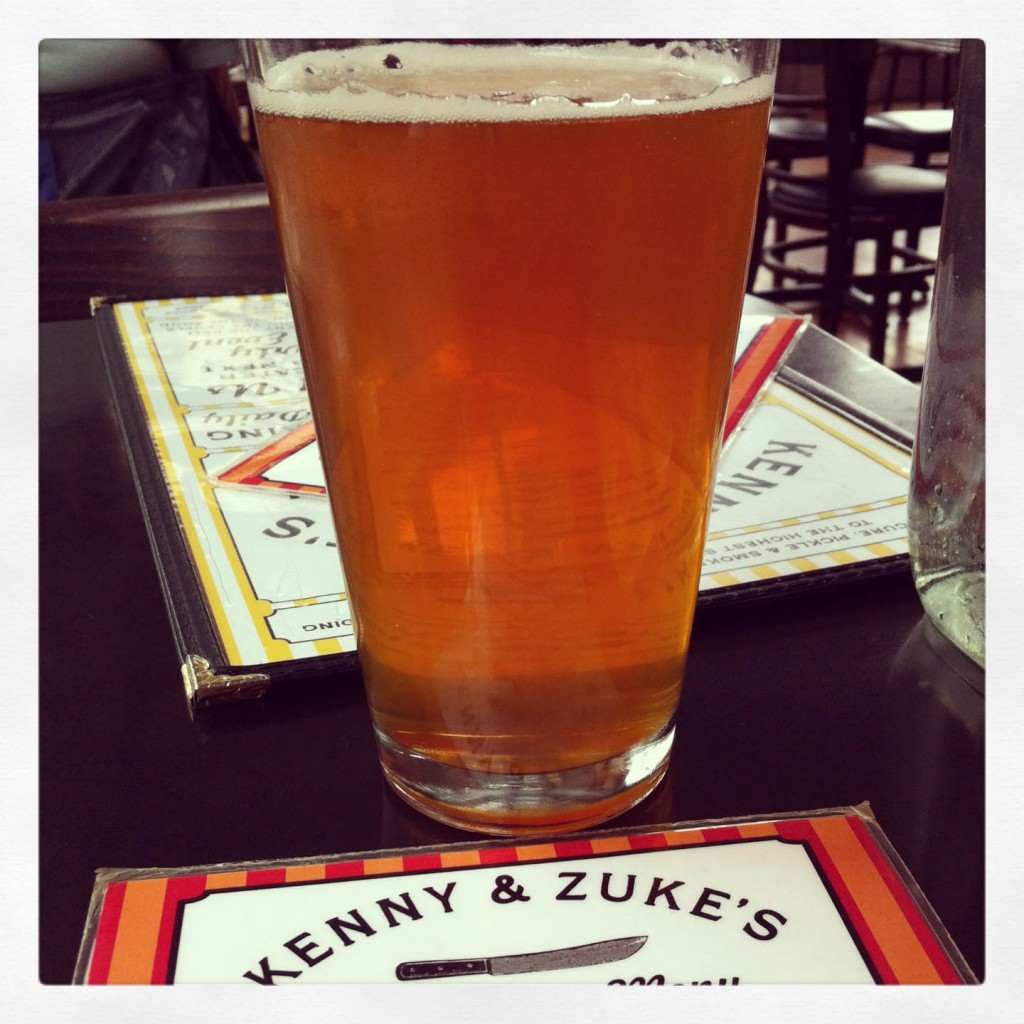 Michael also got the hot dog smothered in sauerkraut, caramelized onions and relish. I had a few bites because it looked too amazing not to try. I know this is sacrilege to a lot of areas of the country but I like my hot dogs with mustard and ketchup. This hot dog did not have either on it and it didn’t need it. The sweetness of the relish and caramelized onions balanced with the sauerkraut was all that was needed. 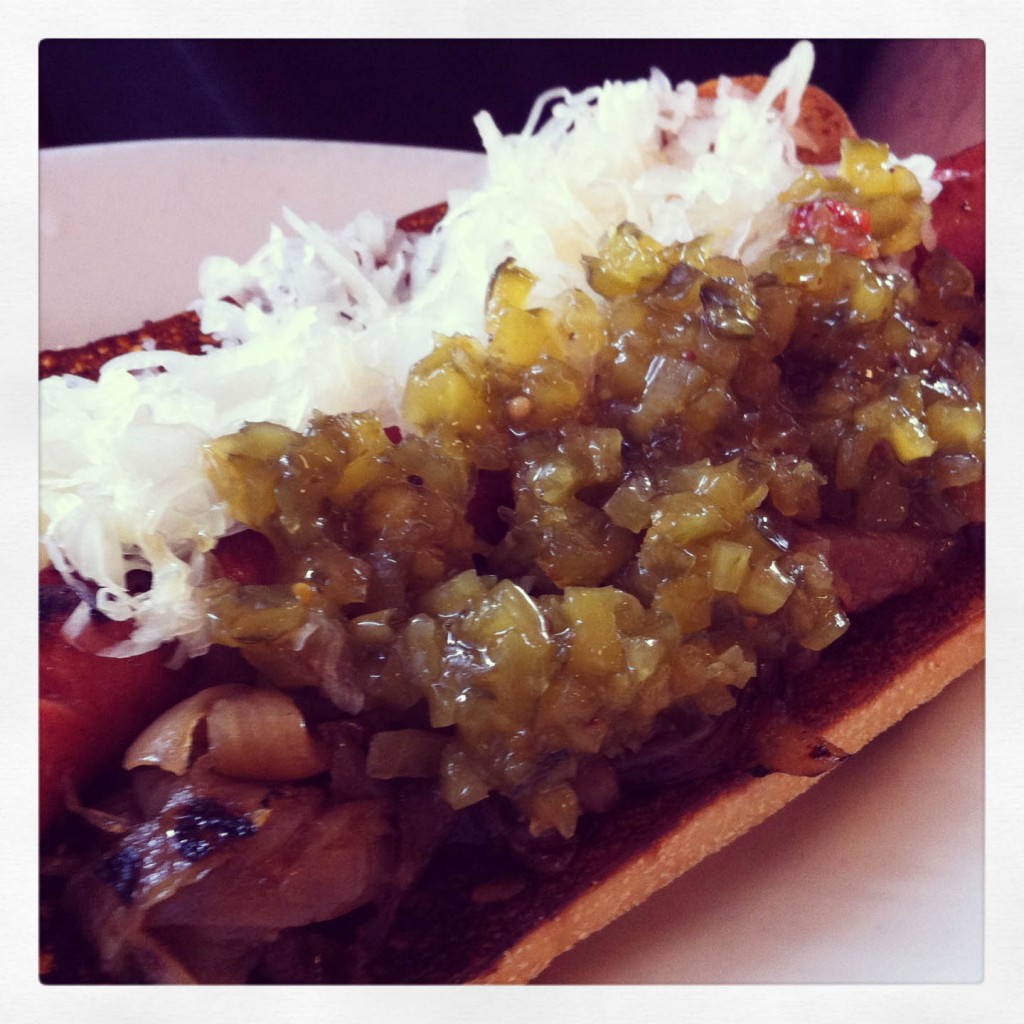 The vibe was pretty cool and the food was great. I’d definitely go back but I’d avoid the lunch hour and I’d definitely avoid Mr. Sourpuss’s section of the seating.

After dinner we took a jaunt up to the Portland Art Museum to see the cycling exhibit.I loved the presentation of the bikes. They were hanging from wires from the ceiling in a manner that flowed around the room like a lazy, curving river. There were 40 bikes and you had a laminated chart to guide you through each station. 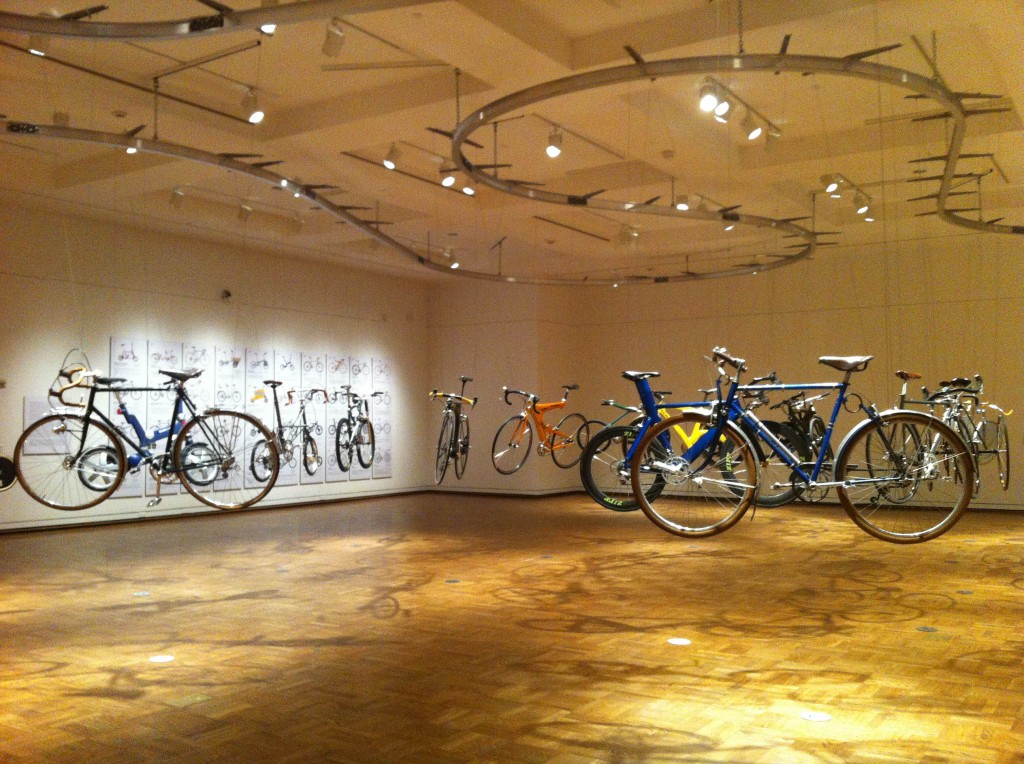 One of my favorite bikes was this one: 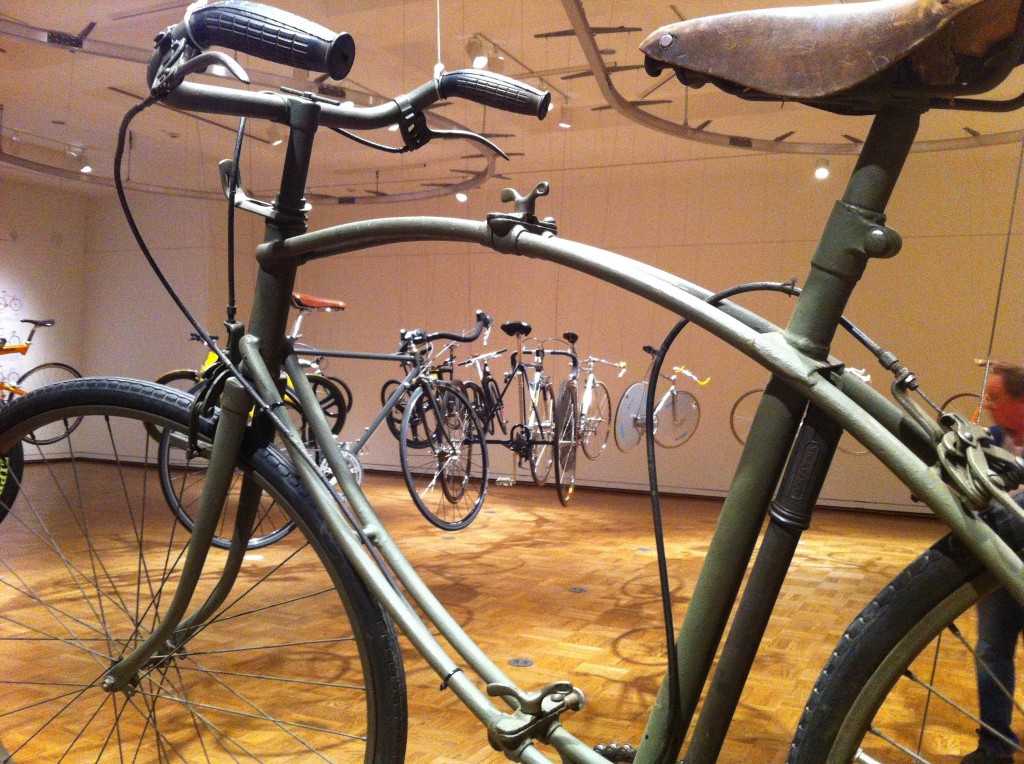 It was the BSA Birmingham Small Arms Paratrooper from 1940. It was used by the British military in WWII and was designed to fold in half and be dropped to the ground using a parachute attached to the wheels. I felt like I was standing in front history. Who used this bike in World War II? Did they survive? 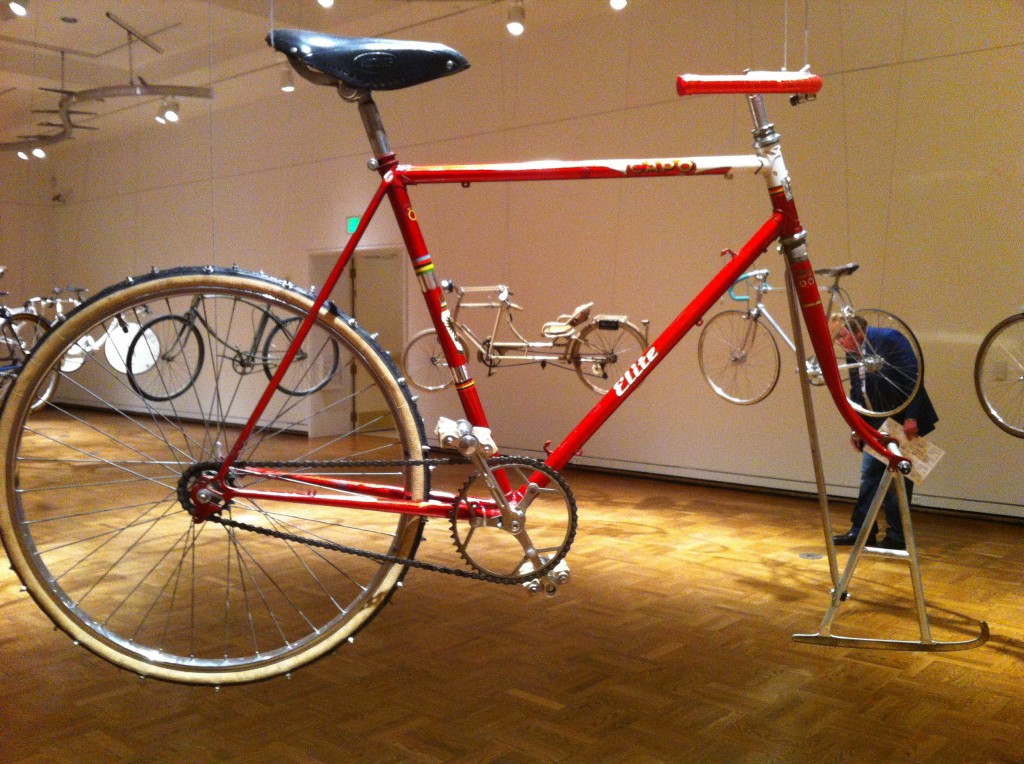 The one above is nothing but BAD IDEAS but so totally cool at the same time. If you look carefully, you can see that it doesn’t have a front tire. That bike above was the “Capo Elite EIS” from 1966. It originated in Austria and was a “skating” bicycle. It was developed for icy streets and the front had a skate blade instead of a tire, and the back tire was studded. According to the brochure it “presented a hazard for riders in an accident, which were reportedly frequent.” 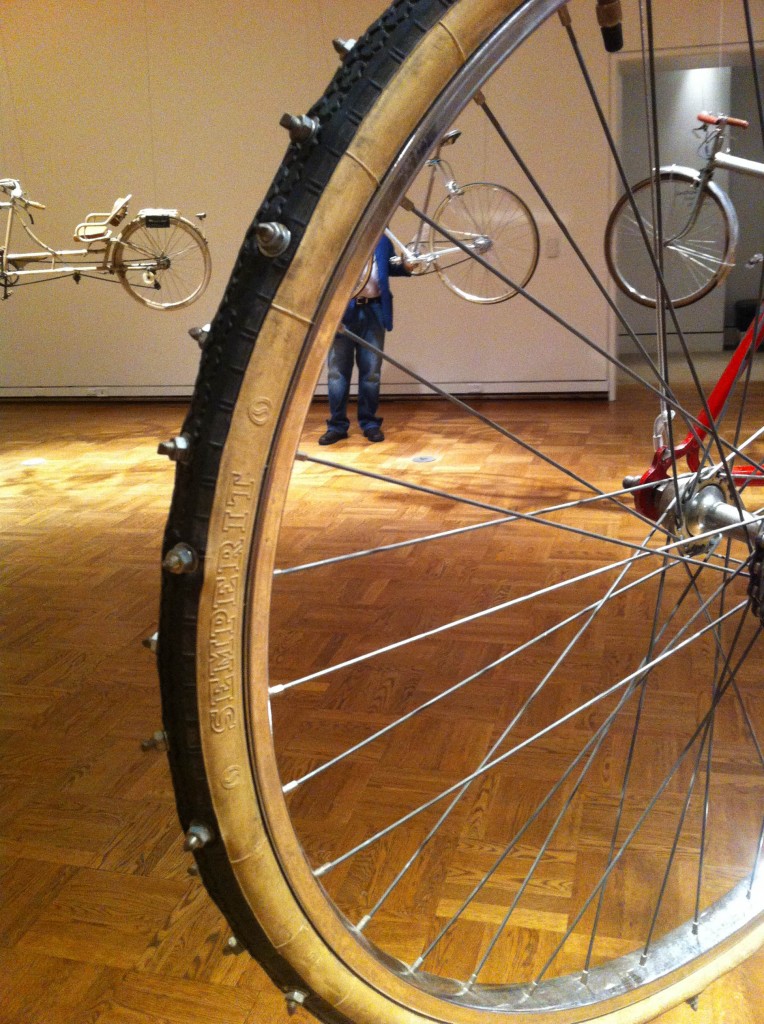 How many of you want one? Yeah, no thanks. There were also a lot of modern bikes. The orange Trek below was eventually banned from competitions because it didn’t have a seat stem. The white one below was part of  a time trial in another event in the 90’s. 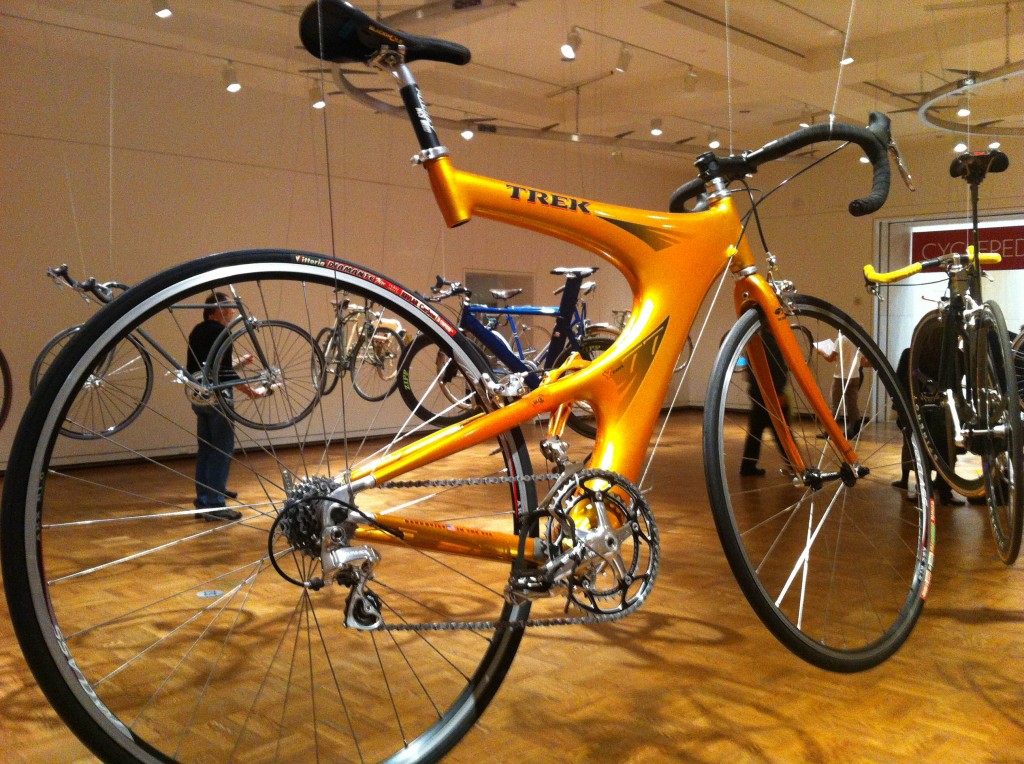 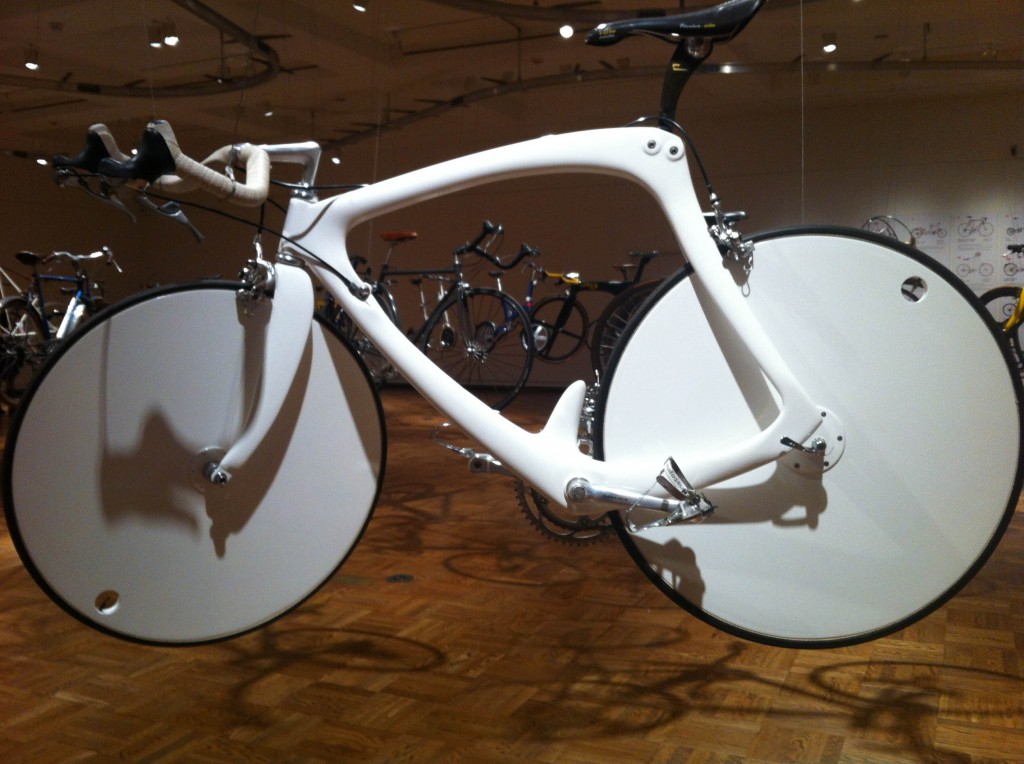 It was cool to see the history and progression of the bikes through the years.There were definitely several bikes where you wondered what they were thinking. There was even a bike where two people sat side by side with one pedal (for the left and right person) and you couldn’t ride the bike unless there were two people. Odd.

After the bikes, we checked out the Gaston Lachaise exhibit. The short story behind his bronze sculptures was that this Frenchman fell in love with an American woman who was married, became obsessed with her and started sculpting nudes replicating her. This woman was married and they had a passionately love affair for over a decade before she divorced her husband, they married and moved to Boston. 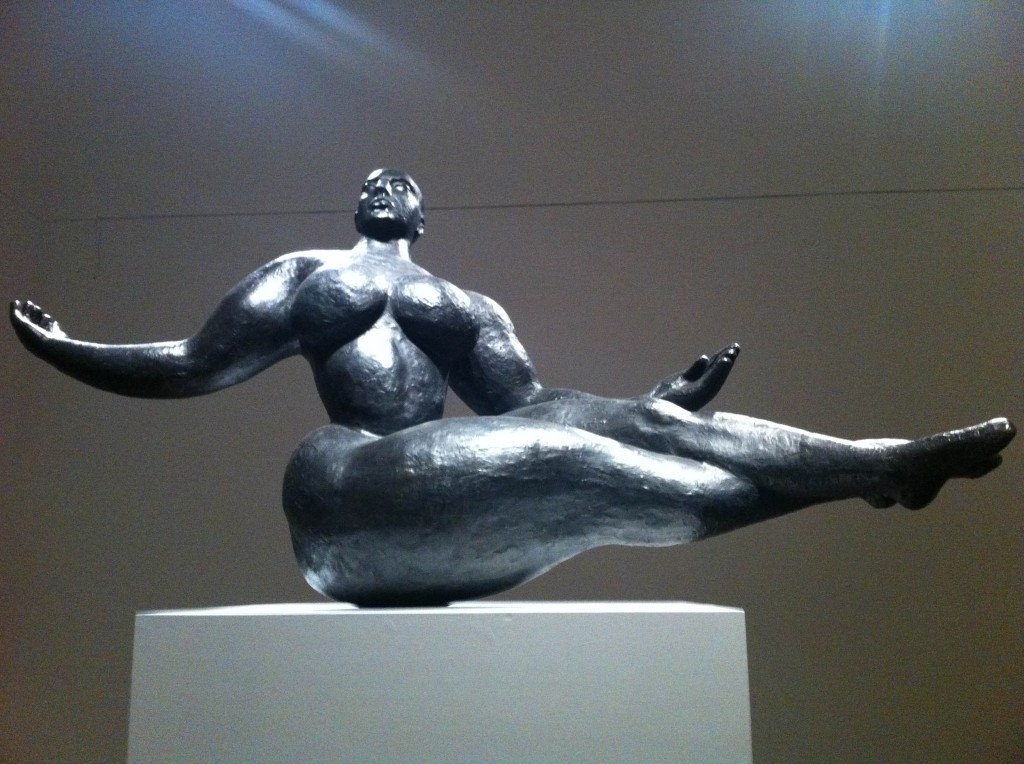 What I loved about his sculptures was the raw honesty and reality of them. The woman he sculpted was voluptuous. Most of the statues were beautiful and sensual–you could tell he was in loved with this woman. There were a few, though, that were simply body parts. I’m not a prude in any way and nudes don’t bother me, but to see a slab of bronze that are just two breasts was off-putting. It was almost like the woman didn’t matter, just the sum of her parts that the men find desirable. There were a few pieces that were dark and almost grotesque. I felt like he was angry when he sculpted those.

Then you’d turn a corner and see something so loving and sweet you’d question your own lens. Something like this: 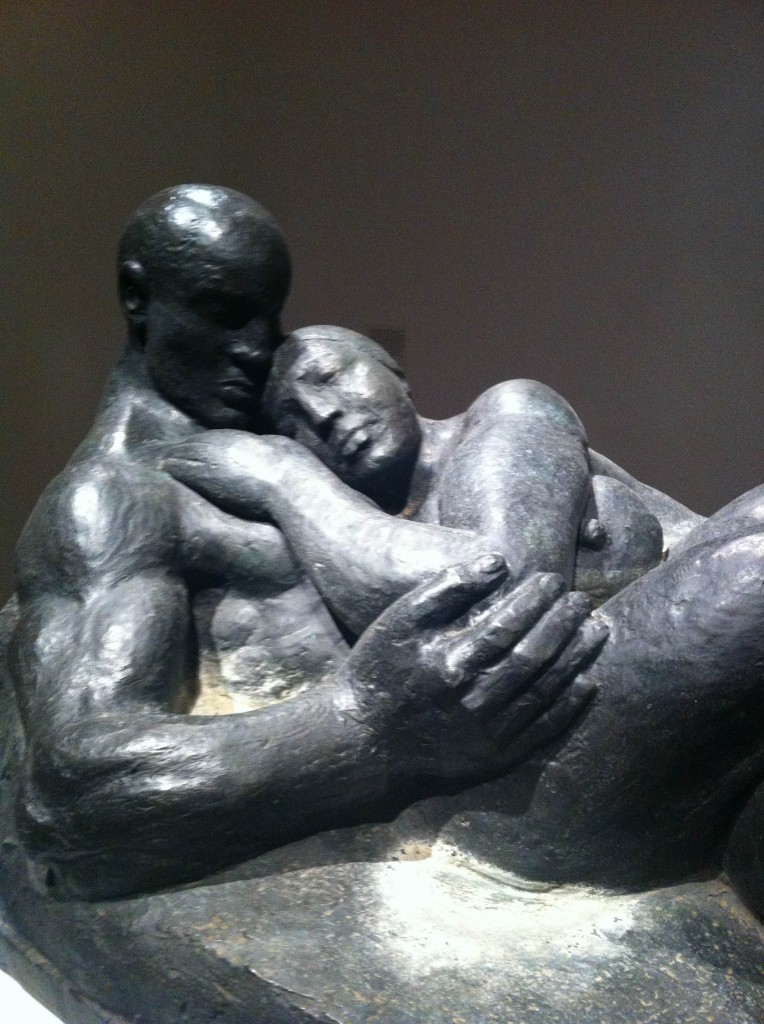 I’d really like to know the background of the particular pieces I saw. Where the ones that seemed violent towards women during a difficult period in their relationship when they couldn’t be together? Was it at the end of the relationship when maybe something soured? I have no idea. I could read a lot into it if I tried.

Best sandwich of your life? And have you seen a good art exhibit lately?