I had a not-so-fun but exciting evening on Sunday. My book club was coming over for dinner and to chat about the book we read,  Fried Green Tomatoes at the Whistle Stop Cafe. It was a dark and rainy evening and since Michael had been building a fire in our fireplace all weekend, he built one for me to make it cozy. Unfortunately we must have gotten a wet piece of wood or something because it was really smokey. I opened the front door and closed the screen door to air it out a little bit.

The screen door was latched but somehow Fat Kitty managed to open it. I realized that the door was open and he had gotten out probably 10 minutes later. I frantically grabbed a flashlight and ran out into the darkness. It was really raining pretty hard and it was so dark outside. My heart stopped for the 10 minutes it took me to search for Fat Kitty outside. My mind was racing. He’s my baby. I cannot imagine what my life would be like without him in it. He sleeps next to me, purring, every single night.

Anyways, where we live there are a ton of places for him to get stuck or hurt. There have been cougar sightings in the woods by the house and a neighbor’s dog was even killed by one at some point. So you can imagine my panic. There’s also a creek and forest/blackberry bramble behind the house. Our street can be busy with cars, and there a plenty of stray cats in the neighborhood that can be mean. My mind was going to all of those horrible possibilities; then I saw a flash of movement in the darkness.

Then Fat Kitty and I played the “chase me” game–where he just darted back and forth between bushes and hedges in the yard, trying not to get caught. He’d run up to the front door but it was closed and I’d try to grab him but he’d race by me back into the darkness. It was horrible! Finally, I put Bella in her crate and left the front door open and Fat Kitty raced inside the house and immediately hid under the bed.

All in all, it turned out okay. He wasn’t hurt and he was safely back in the house but goddamn that freaked me out! Poor baby was scared to death, too. I saw later when he came out from under the bed that he had a scratch above his eye that was bleeding a little bit. I think it was from the bushes. It wasn’t a cut and it looked okay the next day so I didn’t think a vet visit was needed. I kept checking on it that it was healing and not getting infected.

My book club came over and I made us dinner. On the menu: crockpot mac n’ cheese! 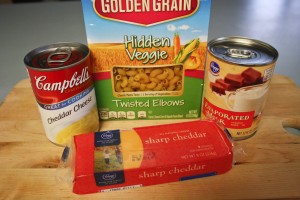 I’ve wanted to make mac n’ cheese in the crockpot for awhile but hadn’t found a recipe that I really liked. Either there were too many ingredients or too many calories. Something always deterred me from trying. I decided to finally give it a try.

My only complaint about this recipe is that it required cooking the macaroni first. I skip most crockpot recipes that require any kind of work beforehand. The point of a crockpot is to throw everything in it, turn it on and leave the house for the day. I made a roast in the crockpot once and while the end result was delicious, I was super annoyed that I had to pan sear all the sides of the roast in a skillet at 6am when I was half asleep. Again, the point of a crockpot is that it is EASY.

I spent a good hour looking at at least twenty different versions of crockpot mac and finally settled on this one because it had good reviews and only a few ingredients. Even though I had to cook the macaroni first, it was still really easy to make this. Some of the other recipes I looked at either had a ton of ingredients (that I didn’t have), or I had to cook the macaroni AND the cheese mixture separately on the stove before combining it, or called for several eggs to be included in the recipe. Most of the recipes that called for eggs had bad reviews–they said that the egg made it into some kind of weird congealed egg-quichey type dish. Not what I was looking for at all.

It was easy to make. Just mix it all in the crockpot like this: 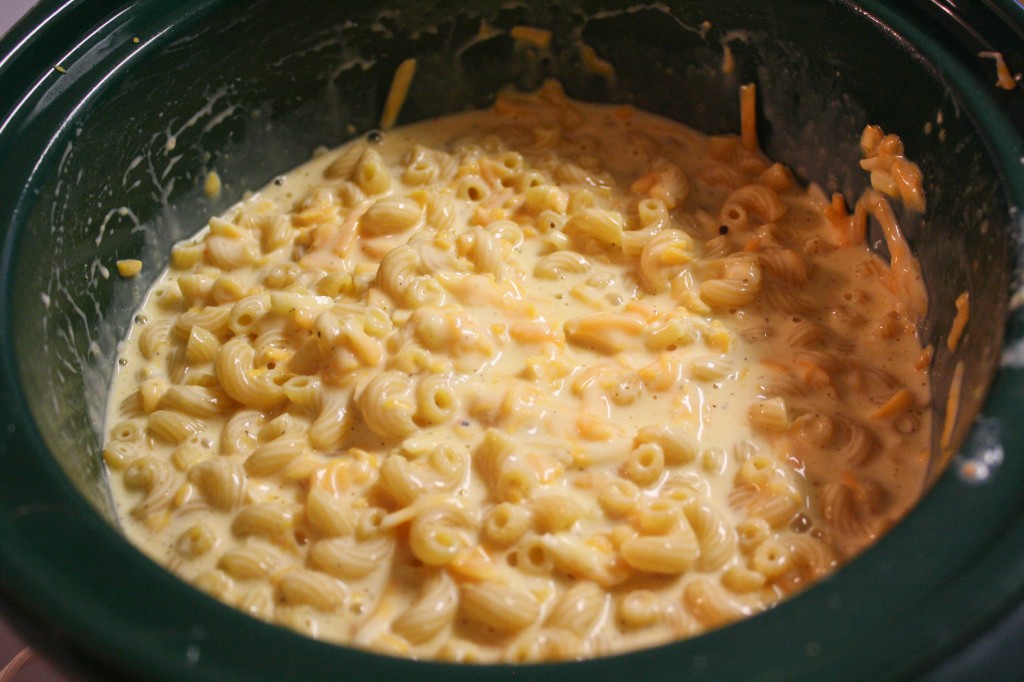 And cook on low for about 3 hours. I added a little bit of dry mustard into the mixture. It was pretty creamy in this “semi-cooked” state.

After two hours it was pretty thoroughly cooked. I stirred it every 30 minutes or so (and might have sampled a few bites to make sure it was edible). 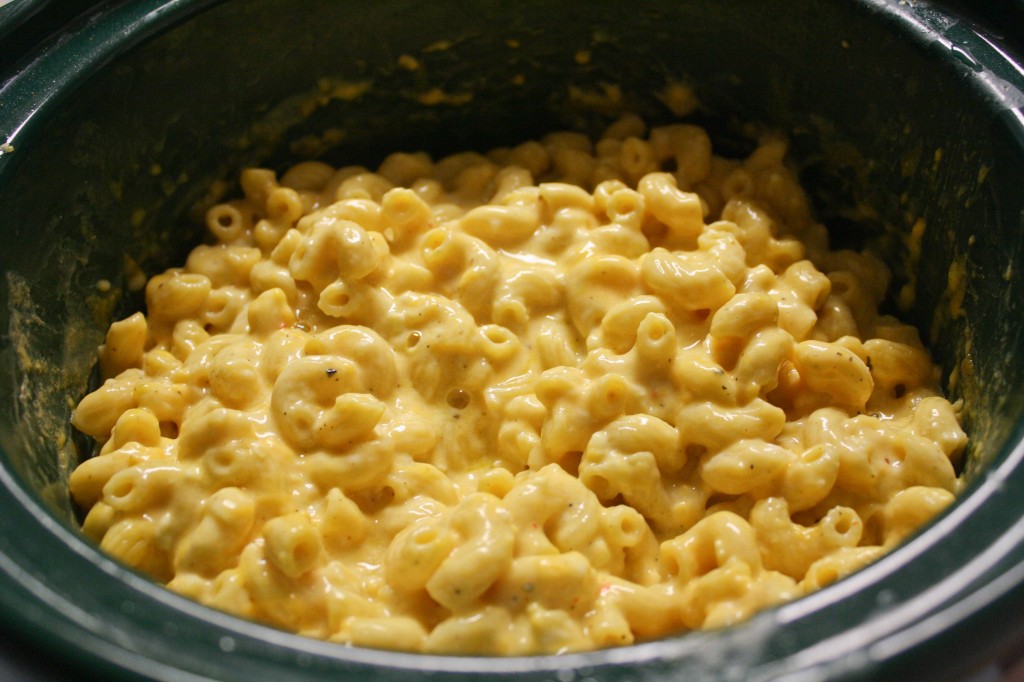 My friends came over for the book club and dinner was served!  I made a spinach salad to go with the mac n’ cheese. 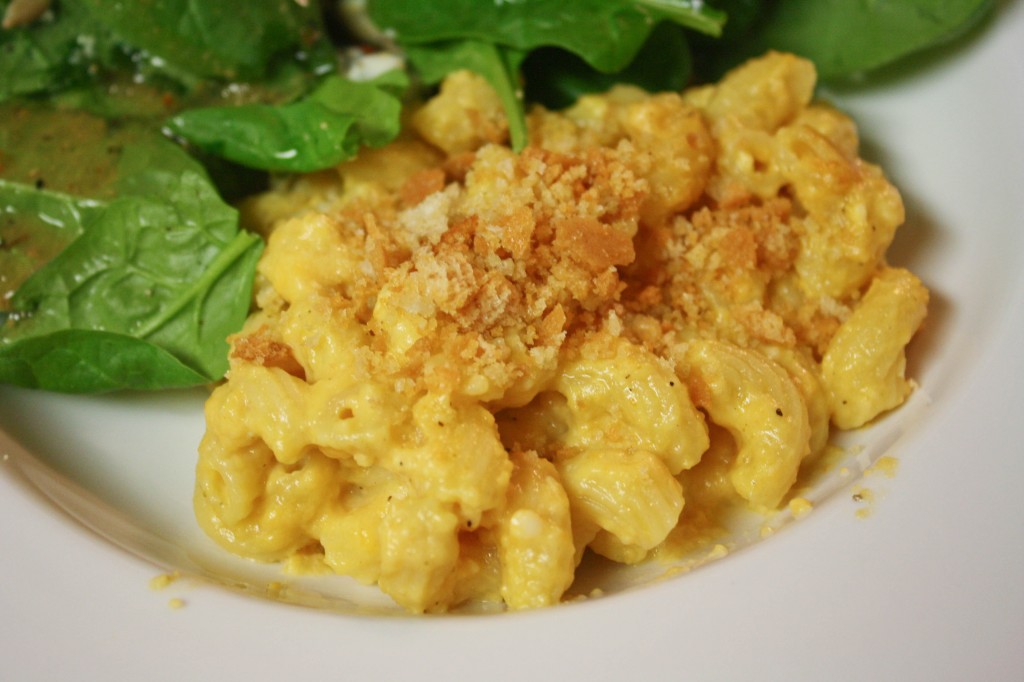 The mac n’ cheese was hot and creamy. It was flavorful and delicious. This is definitely a recipe I’d make again. I’d probably make a few tweaks. I used three different cheeses: sharp cheddar, about 1/4 cup of white cheddar, and the rest of Colby Jack. I think next time add a little extra sharp cheddar too. 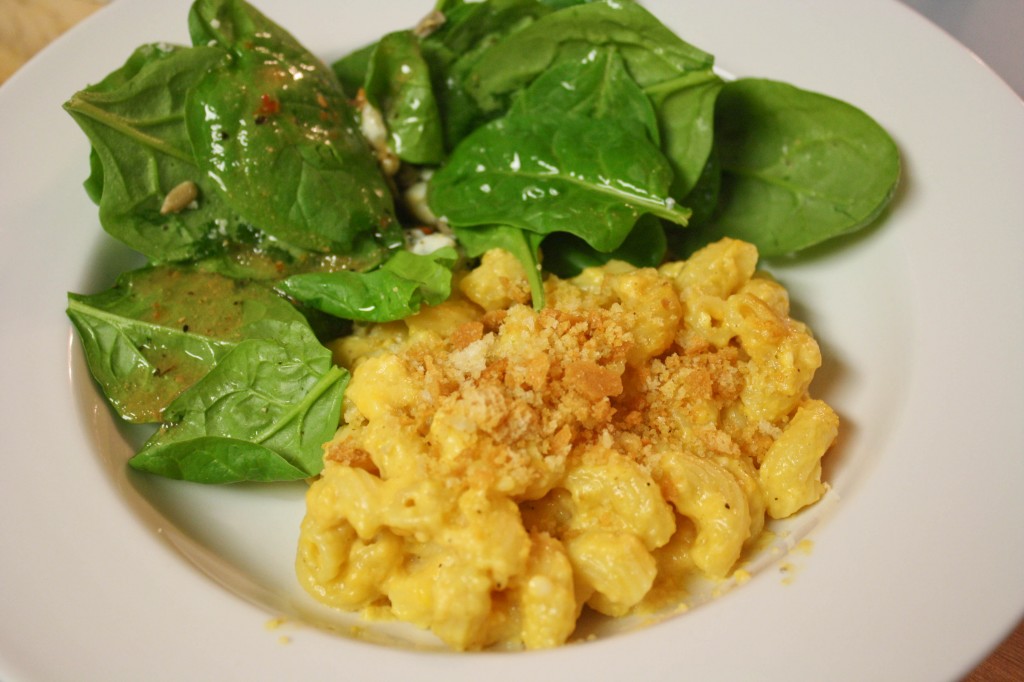 I sprinkled some dry bread crumbs on top of the mac. This would be a great recipe to prepare for a family gathering. It made about 8 servings for me. We settled in next to the fire, ate dinner, Bella fell asleep on the couch in between me and one of my friends 🙂 and we discussed the book.

We all sort of liked it in varying degrees, but we all agreed that this was a case where the movie was better than the book!

22 thoughts on “Slow Cooker Mac n’ Cheese and a Scare”