It’s starting to feel like winter! It’s been 32 degrees in the morning with lots of ice on cars. It’s time to bring out the winter coats. Stevie has found his favorite spot in the new house:

There’s also a small vent near the floor under the kitchen sink and he’ll sit right in front of that, too. Which is super convenient for us when we are trying to do dishes. 😉

I’m not sure if I mentioned it, but because our house is a little weird, we had to do a special situation for AC and heat. The first half of the house is the original 1920’s with vents like the above picture. So the main floor was “AC ready” but because the upstairs was a converted attic, there were no ducts up there. So when we got AC installed in our house this summer we had to do it in two parts. We got traditional AC for the main floor, then we had to get those Mitsubishi ductless units for our bedroom and for Logan’s bedroom.

Because it’s been so cold lately we finally got to use the heat portion of the ductless units and they are AMAZING! So quiet. Super efficient. It doesn’t take much to warm up the room and you can set it up to maintain a certain temperature (instead of just having it run all the time). It will be interesting to see HOW efficient they are on energy. Since we have solar panels on our new house, I am hoping the combination of the panels and the ductless units will save us a ton of money on heating and cooling in the house. Even though we have to spend a lot of money to do two separate systems.

Anyways, this weekend we had the Halloween Party and then Sunday was kind of a chill morning, hanging out with my parents and Logan was playing with his Halloween toys:

After my parents left to head home to Seattle, I went swimming, had a late lunch and then prepped dinner. I decided to make this keto beef stroganoff.

It was pretty easy to make and I love having a crockpot meal! So easy. The only change I did was I added the heavy cream and sour cream one hour before it was going to be done. I didn’t thinking putting it in the crockpot for the whole time would be good–it might curdle or something.

I also used fresh garlic from a friend’s garden! It was so good!

Dinner was really flavorful! I liked it a lot. The sauce was a little thin. Then I realized that it was a SOUP! Duh. I might use less broth next time I make it, though.

I wasn’t sure what to use as a base — I had cauliflower “Rice”, low carb noodles, zoodles, and in the end we used a chickpea pasta rotini instead. Not low carb, but it was really tasty.

Right now I’m not really doing keto. I’m doing more of a low carb/carb cycling program. I saw the above graphic on instagram and I liked the diet suggestion. I might do something like what it suggests, where I do a month of keto, month of low carb, month of something else. Maybe Mediterranean Diet, maybe Paleo or Slow Carb. I just feel like my body adjusts to whatever diet I try REALLY FAST and then it stops working. So maybe doing something like this will be better to switch things up.

Last Thursday Logan turned 2 officially! We took donut holes to daycare so the kids could all celebrate together and everyone told Logan Happy Birthday. After daycare, he had his 2 year checkup with the doctor and he’s doing great. The doctor was really impressed at how well Logan is doing. Logan showed off and pointed to all the body parts he knows (his eyes, ears, mouth, elbow, hair, etc). Logan is 36.5 inches and grew almost 3 inches since his 18 month appointment! Holy cow! He’s 96% for height.

After the doctor appointment we went out to dinner to Mike’s Drive In in Oregon City. Michael and I got burgers. Logan got a corndog! And he loved it. 😀 He did so great. He had a great day.

In other Logan news, he might be ready for a big boy bed. Which is both exciting and scary for this mama! He’s starting to try and climb out of his crib. And he’s tall, so it’s easy for him. OY. 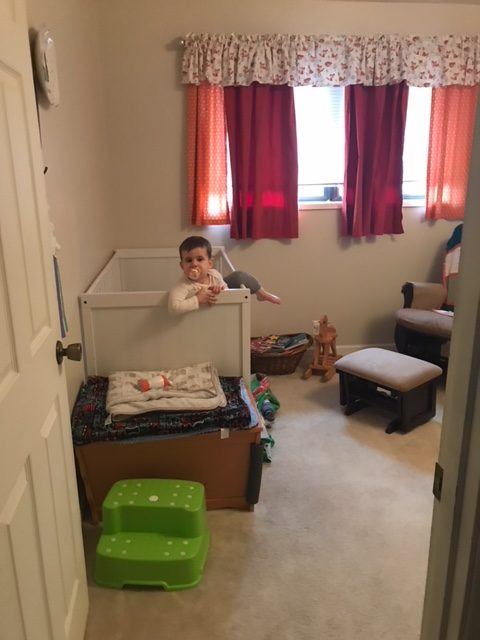 On Saturday (after the gym), we met some friends at Sokol Blosser for the spring pick-up party for members. It was so much fun and we were really glad we were able to hang out with our friends. We hadn’t seen them in awhile and it was nice to catch up.

The Sokol Blosser party is very nice. We were there in October with some other friends. When you first get there, you get a glass of their sparkling white. Love it! 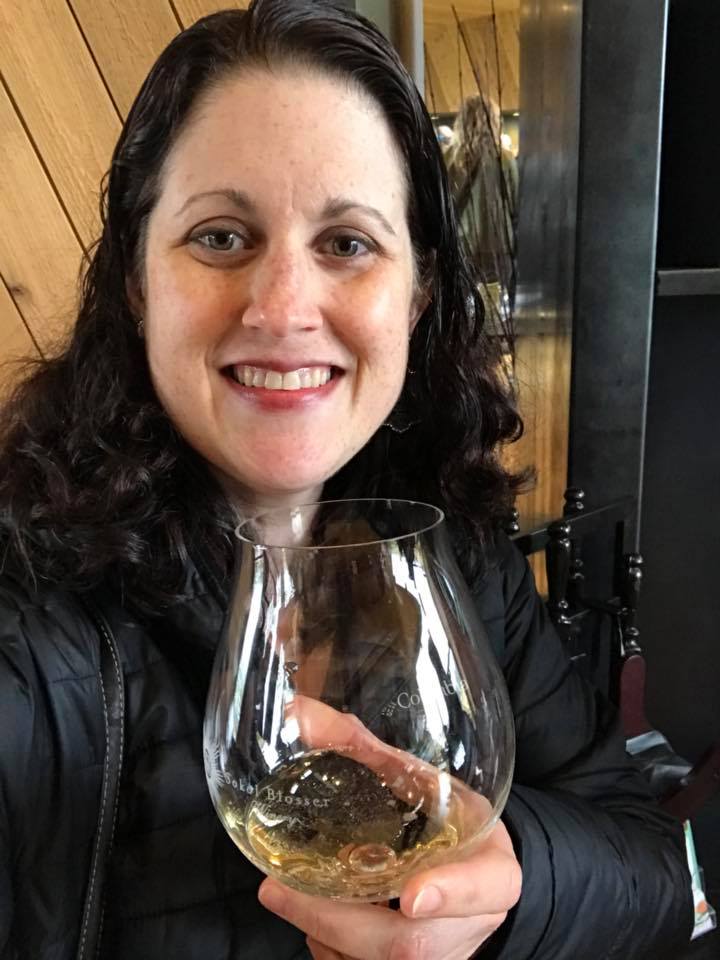 The place was packed. There was a bunch of food–yummy smokey steak with chimichurri sauce, polenta, roasted veggies, toasted chickpeas, salad, salami, cheese, crackers, olives. All of the food was really tasty and it was enough for a light lunch while we did our tasting.

After the party, we decided to stop at one other place none of us have ever been to: Stoller. The venue was gorgeous! It was huge. I guess in one section they were having THEIR spring pick up party for members. We went to the tasting room. It was a huge, cool venue with lots of room. The place was packed so we walked to the back tent. The tent area was huge and had nice tables set up and it was heated and comfortable. The wine tasting was at your table, so that was nice. 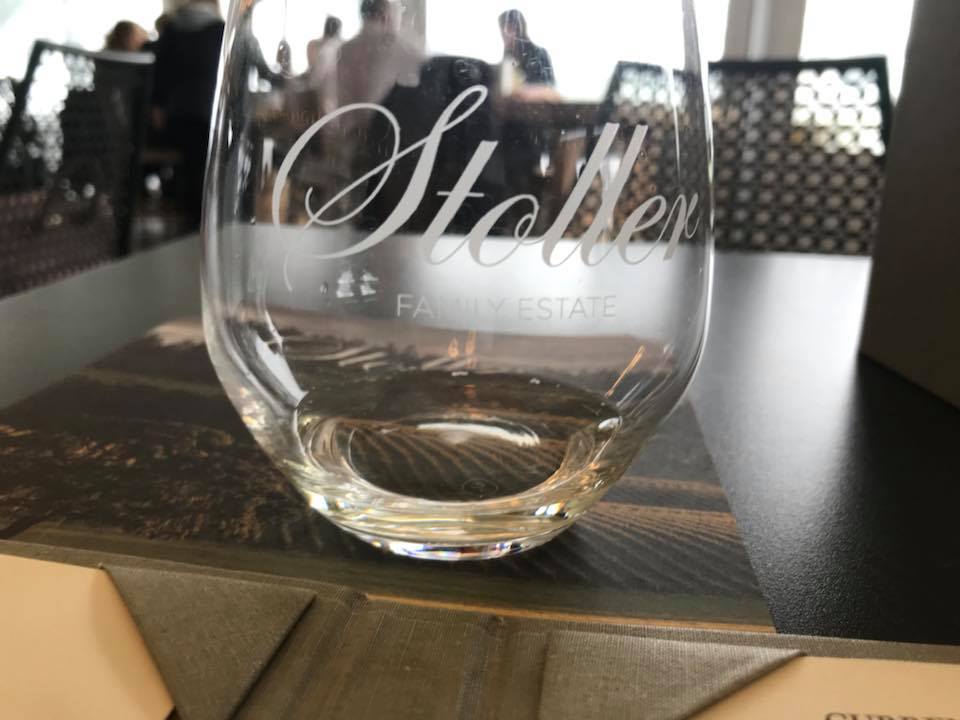 It was a really nice Saturday!

On Sunday I decided to give my pressure cooker a test run in the “slow cooker” setting. I was hoping that I could get rid of my crockpot if this worked well. After my swim, I got all the stuff ready and put it in the pressure cooker. I had a packet for the “country rice” and used frozen chicken tenderloins.

I used the slow cooker setting on my cooker. Then I ran some errands and stuff and when I got back I checked it and realized that it was already cooked! It was like 2pm and I had thought I set it on “low” for 7 hours but at the 4 hour mark, everything was all cooked. BUMMER. I was kinda irritated because then I had to just put the food in the fridge and reheat it for dinner. Which is fine, but not ideal and not like my crockpot. So….I guess I can’t get rid of my crockpot yet. 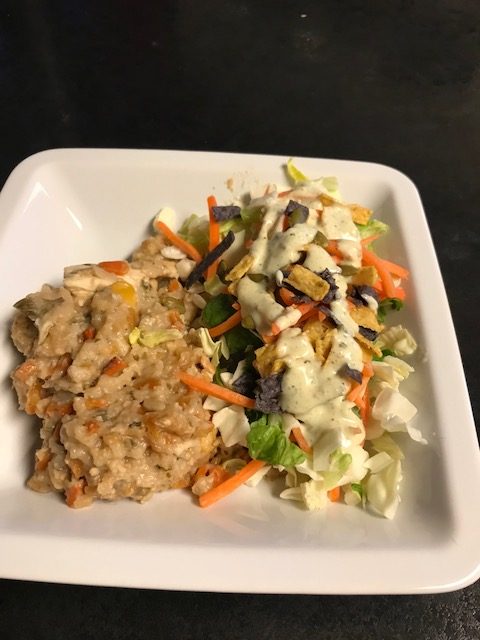 The dinner doesn’t look pretty, but it was really flavorful. We had salad with it. Yum!

Anyways, any ideas on the slow cooker setting for the instant pot?