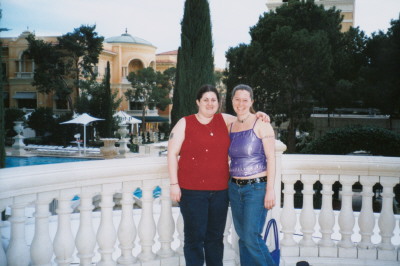 That picture above was taken in 2005. It was a few weeks after my 25th birthday and a month before I was going to have surgery to repair the ligament in my ankle. (You can read more about that here: Why Wednesday – Why I Don’t Take Things for Granted.) My cousin Anna and I decided to go to Las Vegas. It was the first time either of us had ever been there and it was the beginning of a love of all things Vegas! As a side note, I’ve been to Vegas I think five times now, once with my friend Robyn and the other times with Michael.

When I got engaged last year my cousin Anna and I talked about going to Vegas for a girl’s trip. After most of the wedding plans were taken care of and I got my tax refund, we revisited the topic. We booked a weekend getaway for the beginning of May. I was craving sunshine, umbrella drinks, and girl time. 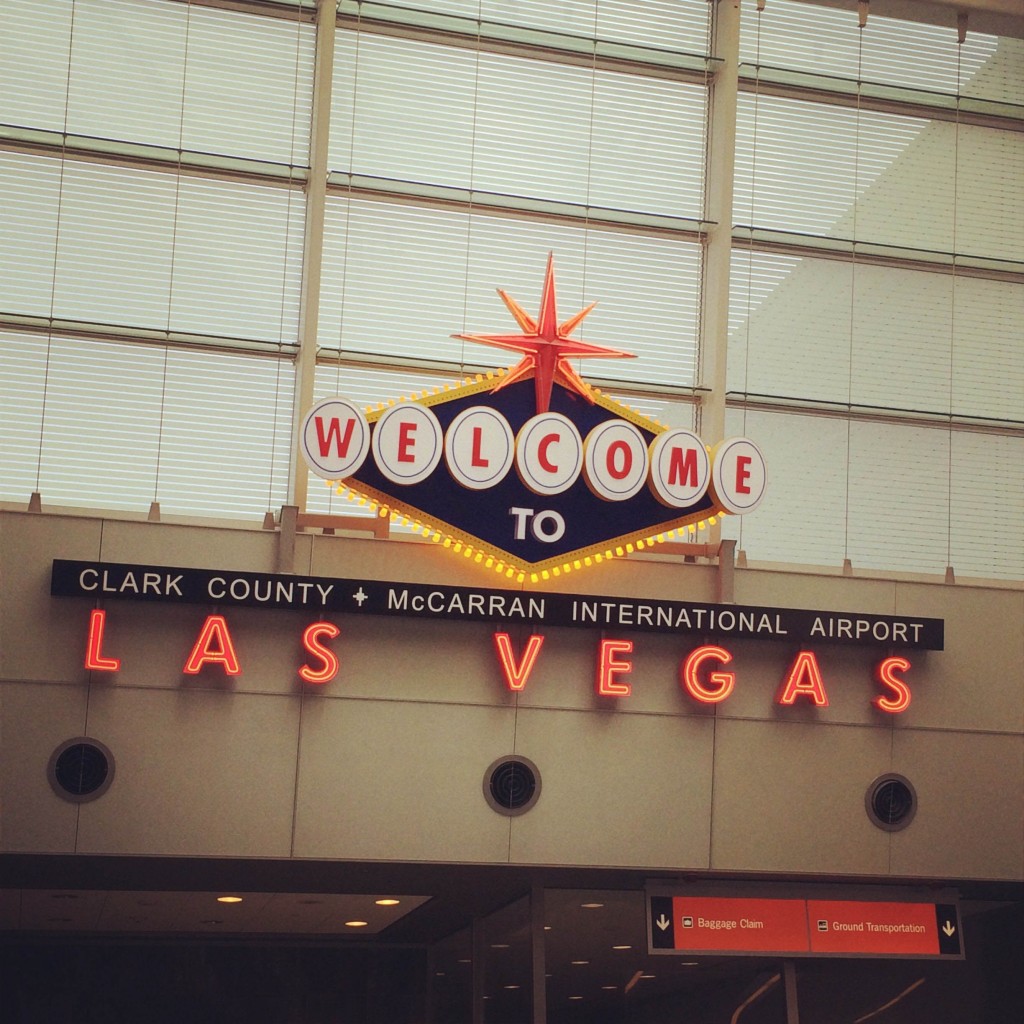 We booked a room in the Bally’s Hotel/Casino. In all the times I’ve been to Vegas I don’t think I’ve ever actually seen the Bally’s. I don’t know why, because it’s right in the middle of The Strip (great location!). This trip wasn’t a bachelorette party or anything. I didn’t want the other bridesmaids to feel obligated to spend a lot of money on something like that. Funny enough, after it was booked I found out my friend/coworker Debby was also going to be in Vegas during the same time! Small world. 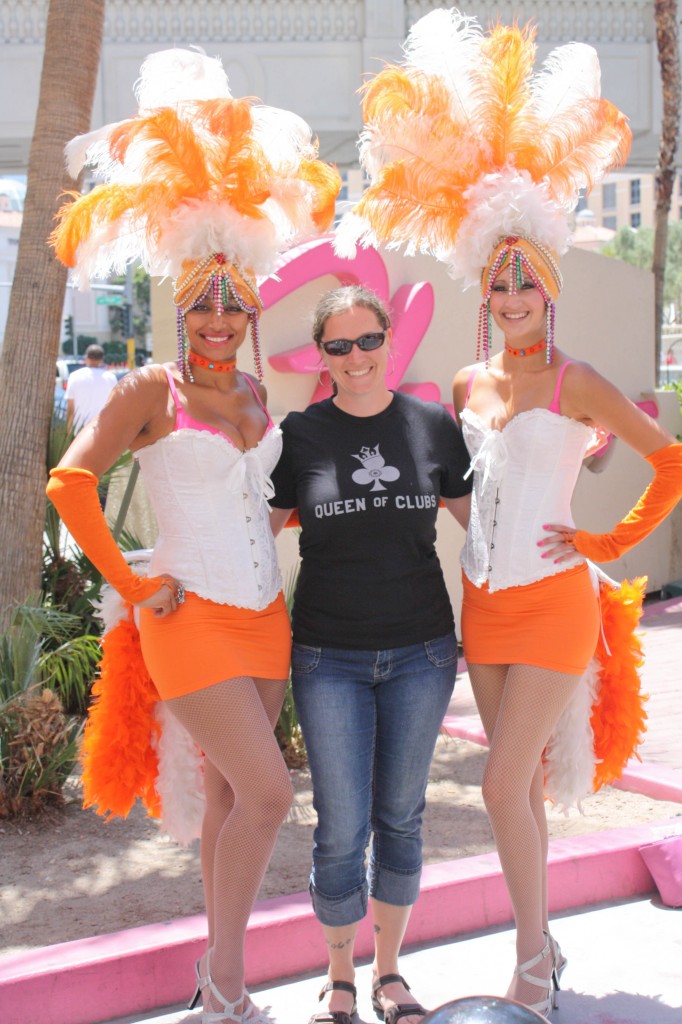 Anna and I got Vegas around 9:30am Friday (ugh that was early). It was too early to get our room so we dumped our suitcases at the hotel and decided to walk around The Strip. I forget just how much walking you do in Vegas! You really don’t need to exercise as long as you walk everywhere. I estimate that we did at least a minimum of 5 miles a day –not including the times we got lost inside casinos. 😉 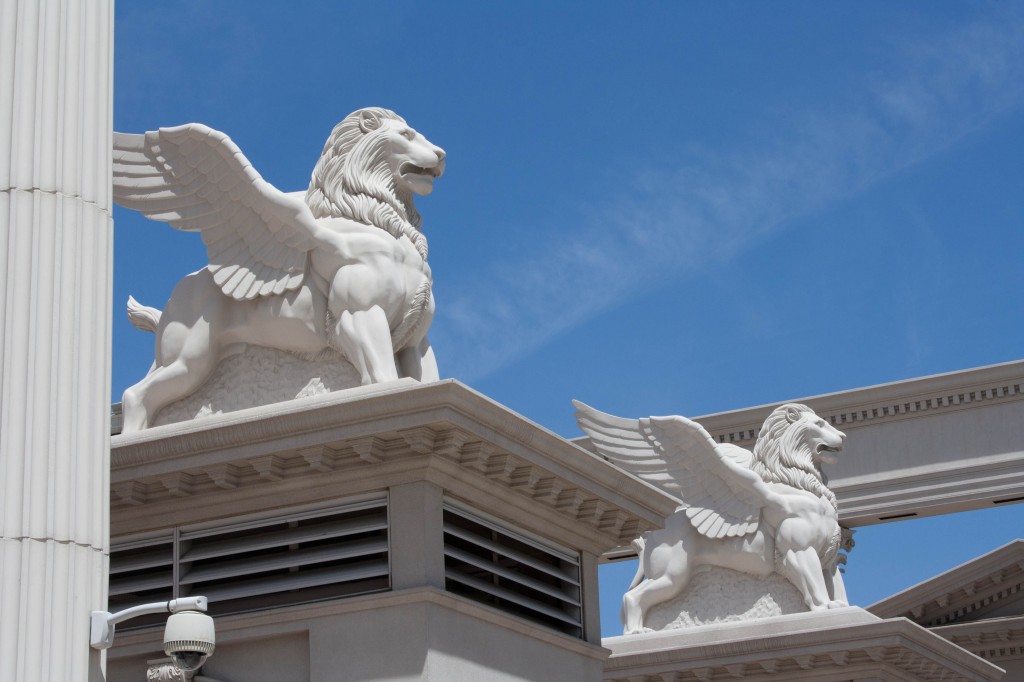 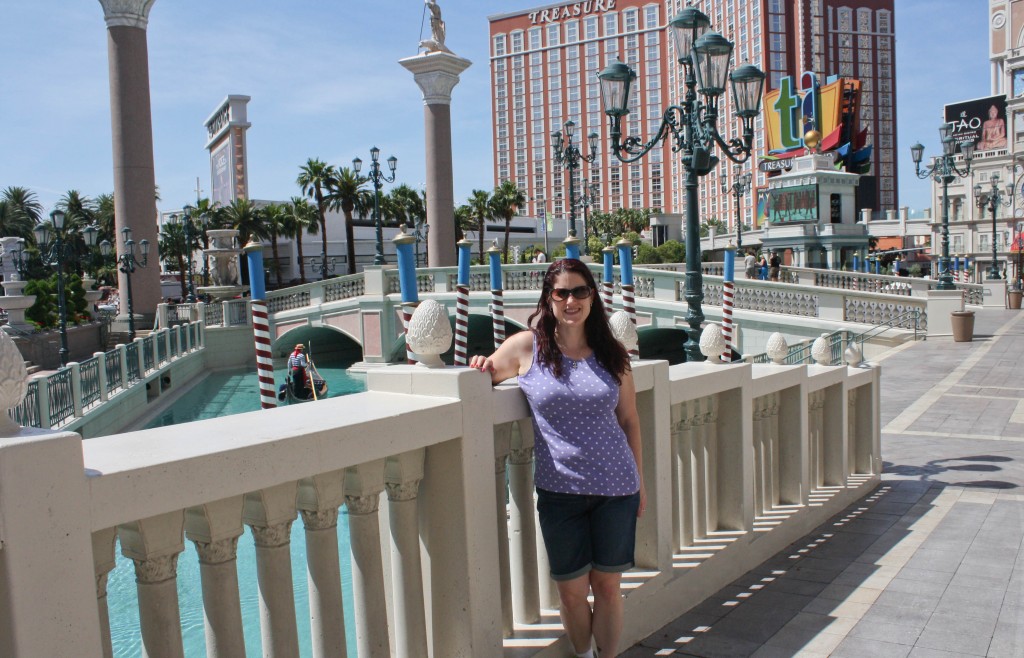 The Vegas Strip is deceptive–you think “oh that casino isn’t too far, let’s walk!” And before you know it, it’s been an hour and you’re still not there yet. We left Bally’s and walked over to Caesar’s Palace and the Bellagio and then ended up at The Venetian. I LOVE The Venetian and would love to stay there some day. We talked about doing the gondola ride (which wasn’t that expensive) but we decided not to. Some day I will do this. It looks so fun. It was around 82 degrees on Friday — gorgeous, sunny, with a nice breeze that made the heat tolerable. 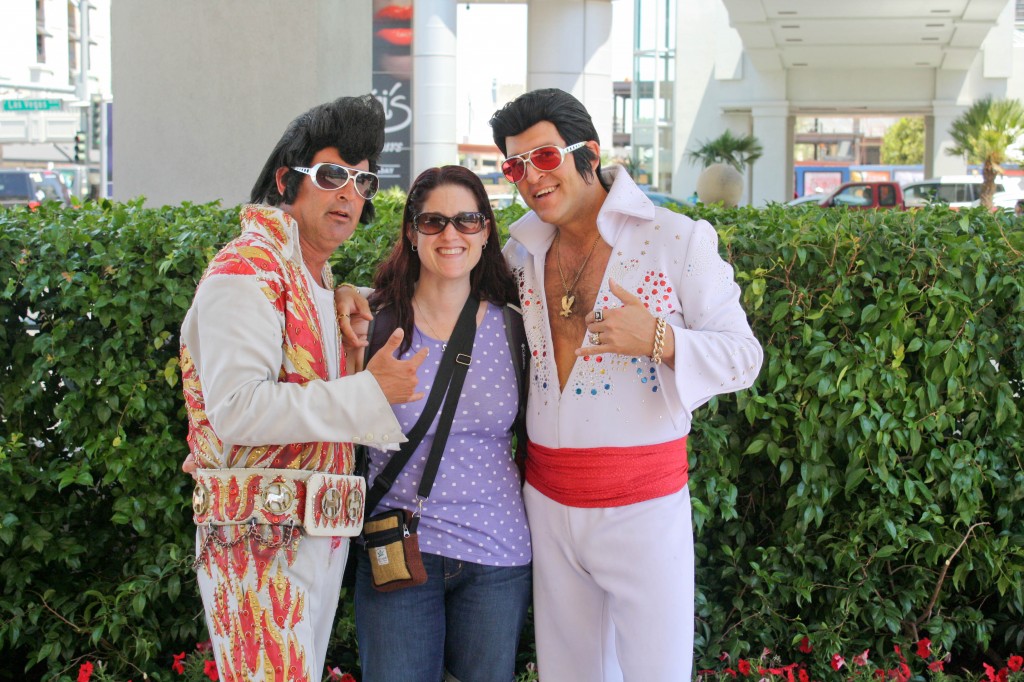 When Anna and I went to Vegas oh so many years ago I wanted a picture of myself with Elvis. I was on a mission–and strangely never fulfilled that wish. This time, I got my picture with TWO!! 😀 I love the street performers. They are so awesome. These two guys were sweethearts. 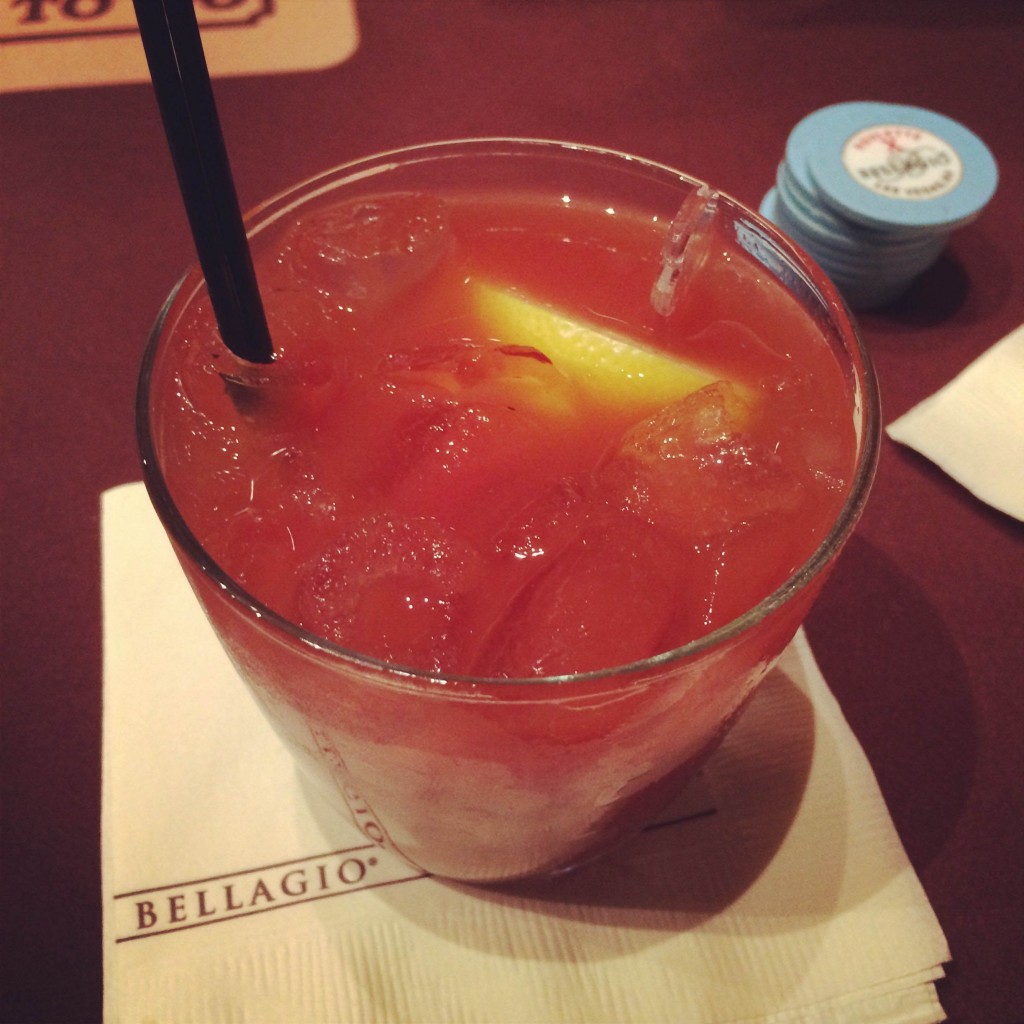 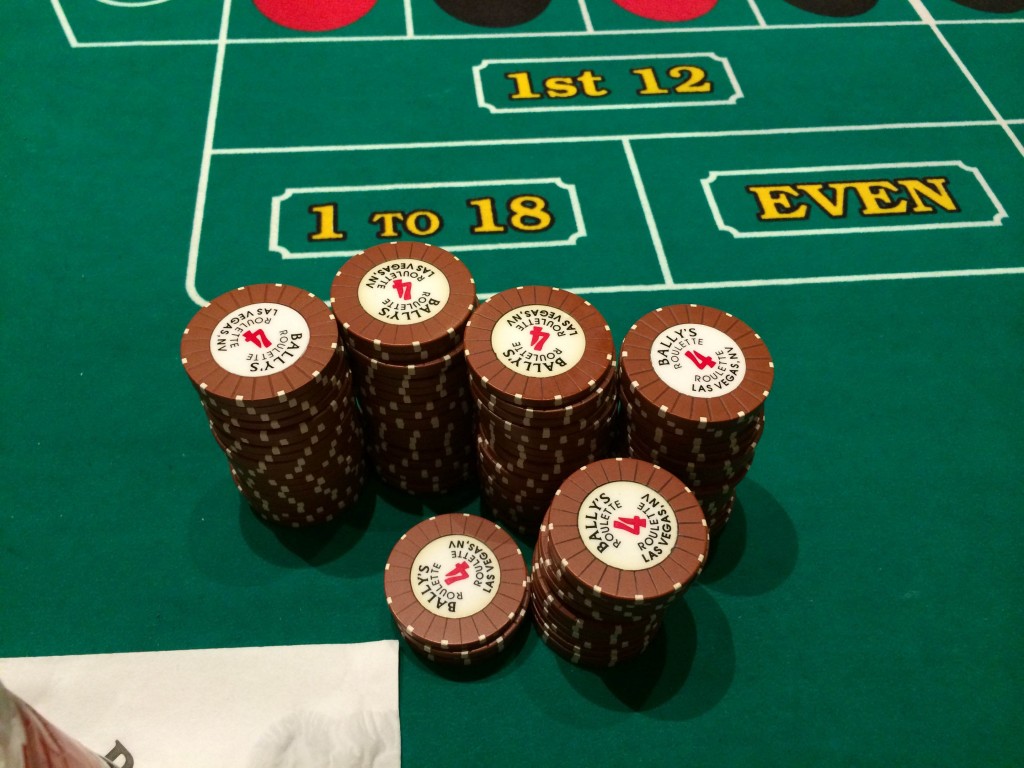 After walking around, gambling a little at The Bellagio and Caesar’s Palace, it had been about 6 hours and we could finally check in to our hotel room. We walked back to the hotel and got our room–which was super dumpy. We’d requested a non-smoking room and when we entered it was like a wall of cigarette smoke (yuck) and the A/C was pretty weak and I also spotted some holes (cigarette burns?) in the sheet on the bed. I called down and we got a different room and it was MUCH better. Smelled great, no holes in the sheets. 😛 Our new room was really nice; the bed was heavenly, the pillows were perfect, the bathroom was huge, the room was really quiet–never once heard revelers in the hallway. I would definitely stay at Bally’s again. 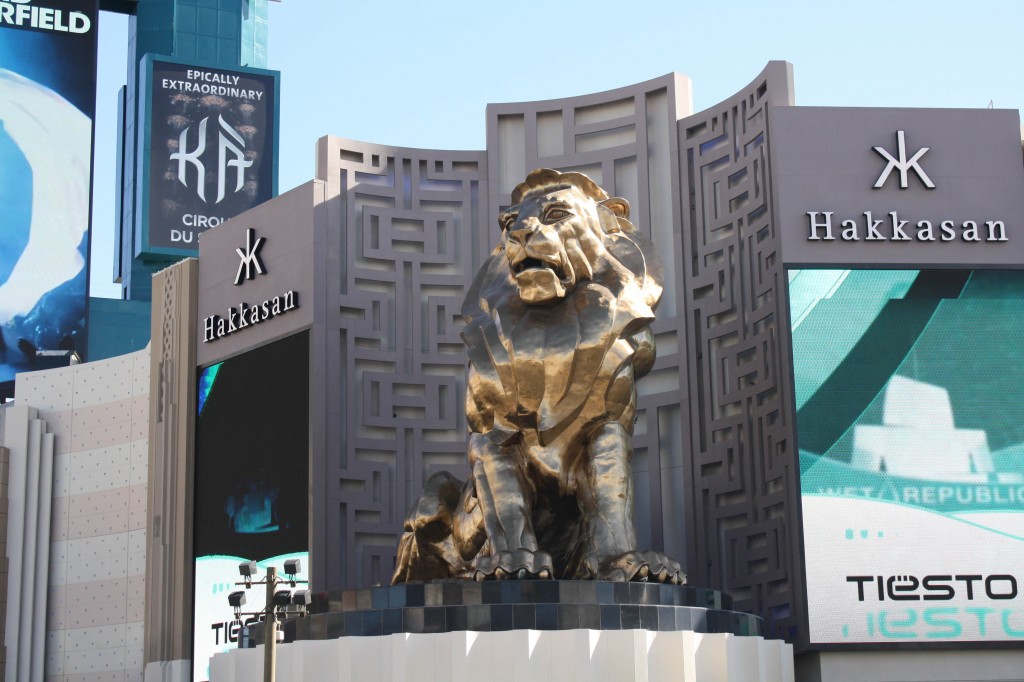 Anna and I got in our swim suits, packed a bag for the pool and then stopped at the Tequila Bar in Bally’s for a snack. They have $2 Tacos and $2 Margarita for happy hour. The tacos were REALLY delicious! I was surprised at how great they were considering they were only $2 each. I got 2 tacos and Anna got 3 and then we went down to the pool. If you go and get the tacos, get the shredded beef. It was so flavorful and delicious. 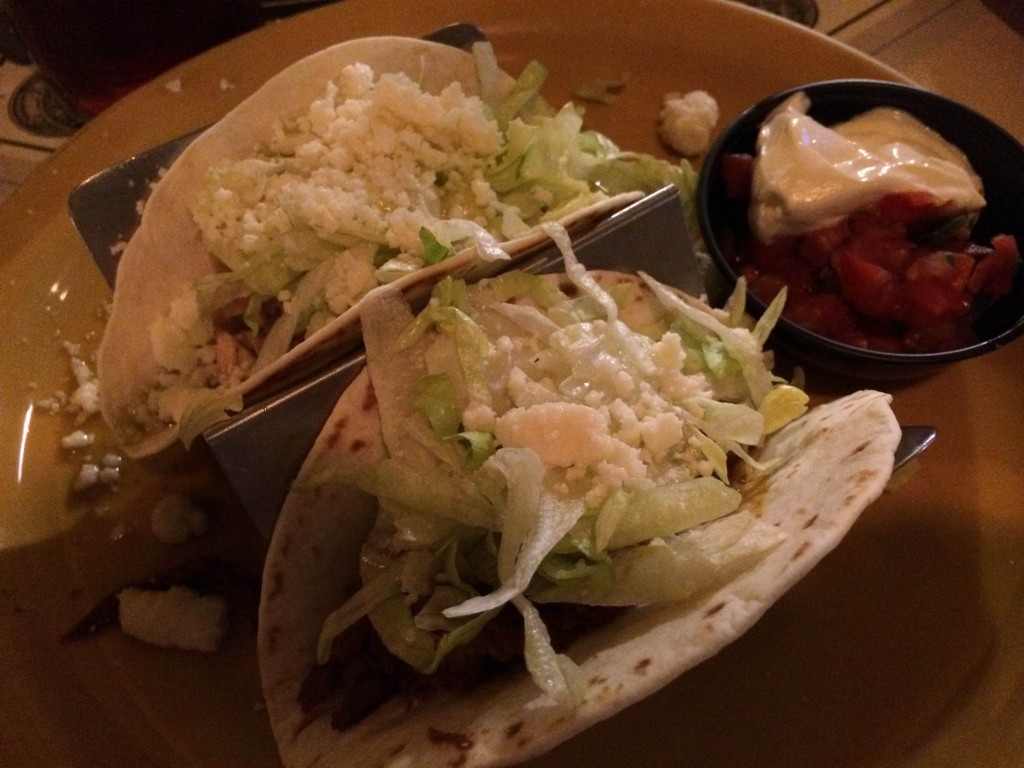 The pool was amazing! It was hot and sunny but there were parts of the pool area that had some shade if you wanted it. There was a big pool and then tucked away in the back was a smaller pool. They had cabanas for rent that were covered and have misters on them. There was a DJ playing fun music and the party atmosphere made us giddy. 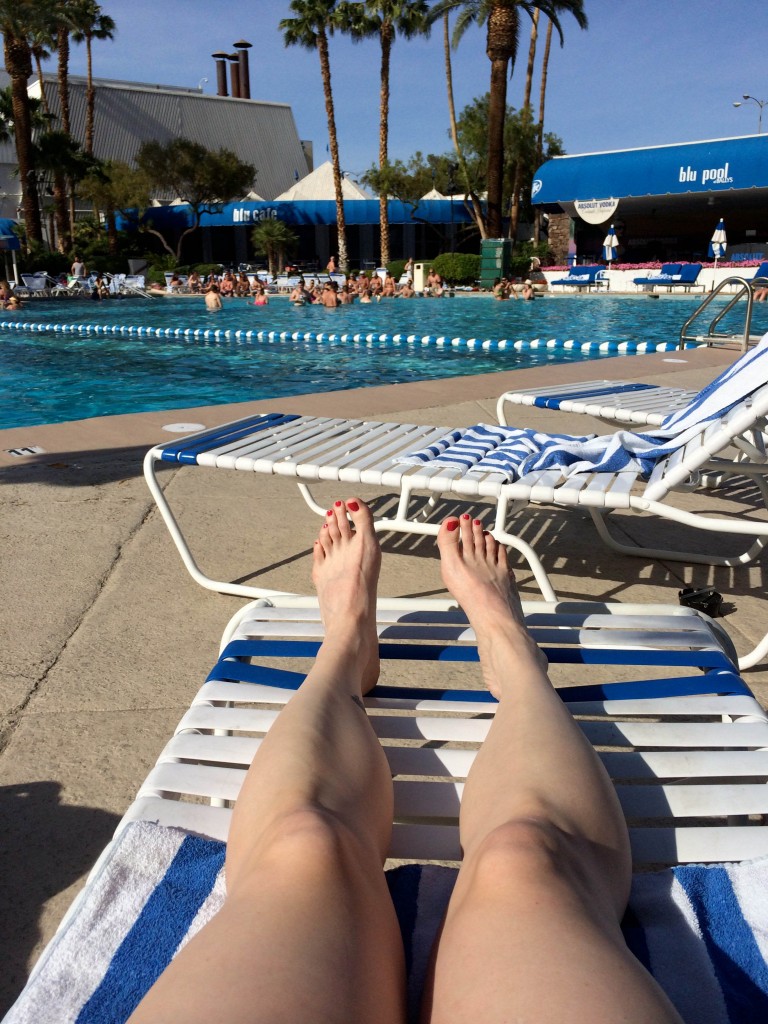 Anna got a strawberry and basil mojito. I got the coconut mojito. My drink was HEAVENLY (sadly, it was lacking an umbrella, but it was still great) but it was very expensive and lacking in alcohol. 😛 That’s the one thing that irritates me in Vegas–overpriced drinks that don’t even give you a teeny tiny buzz. 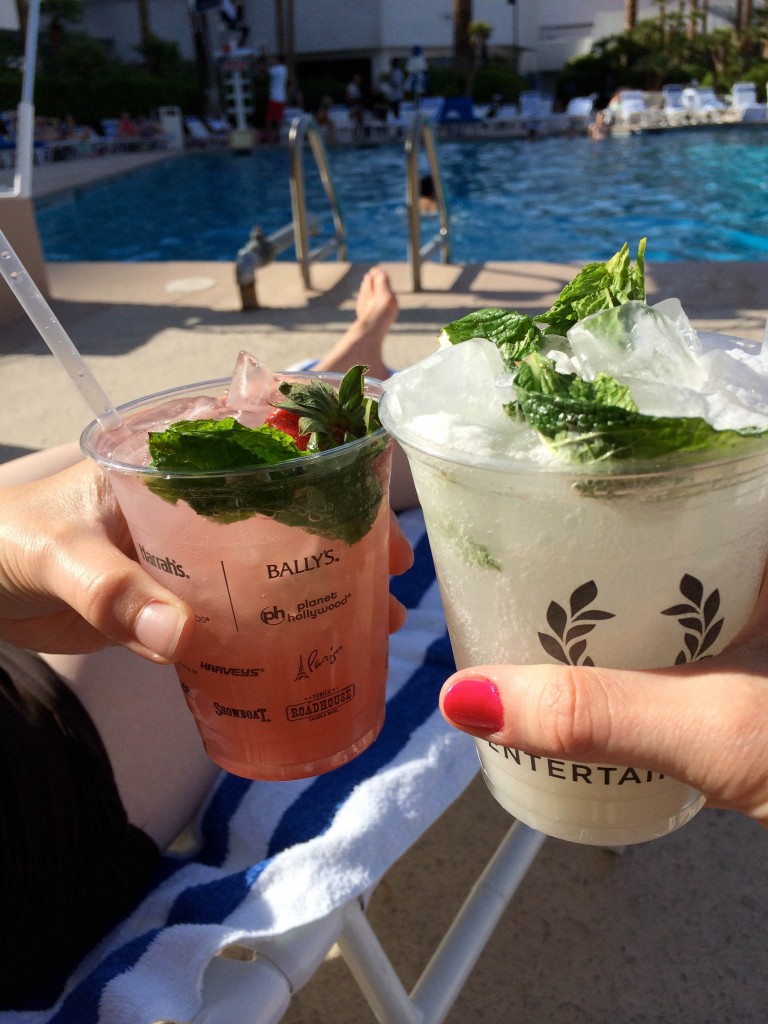 We lounged at the pool for about two hours and then decided to go back to the room, clean up and go out. We both wanted to see Fremont Street. Every time I go to Vegas I vow that I will go and never do. We finally did it! We got the 24 hour bus pass (I think it was like $8 or so) and took the bus to Fremont. It was a very crowded bus, took about 30 minutes to get there, but it was easy enough to figure out. 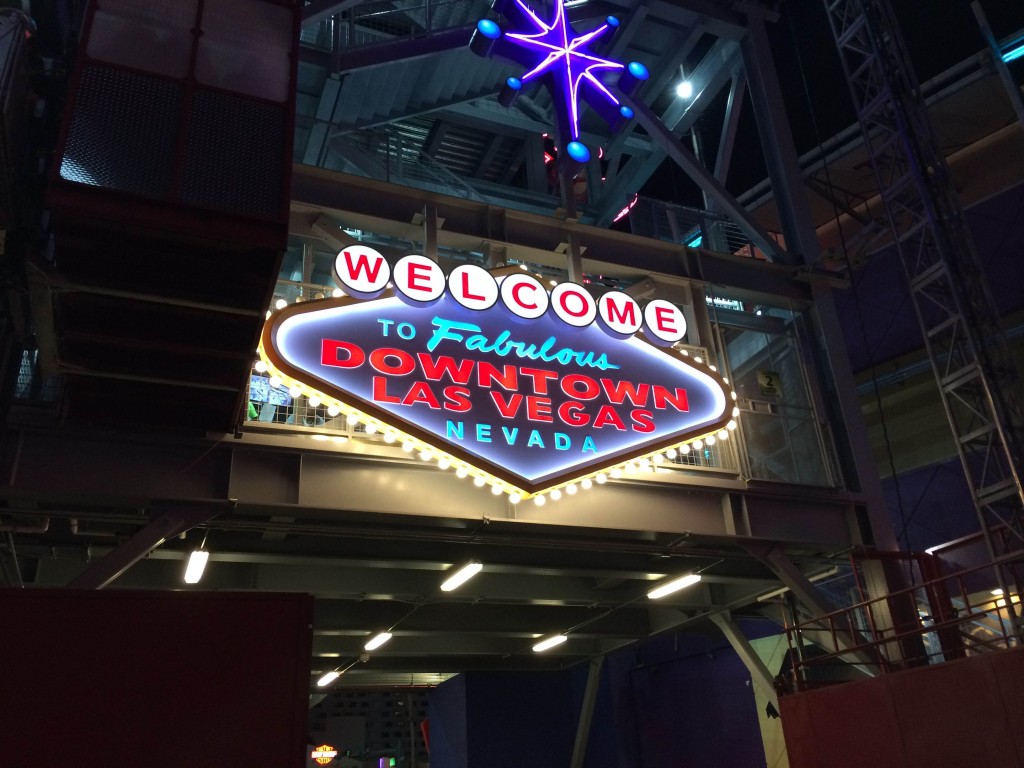 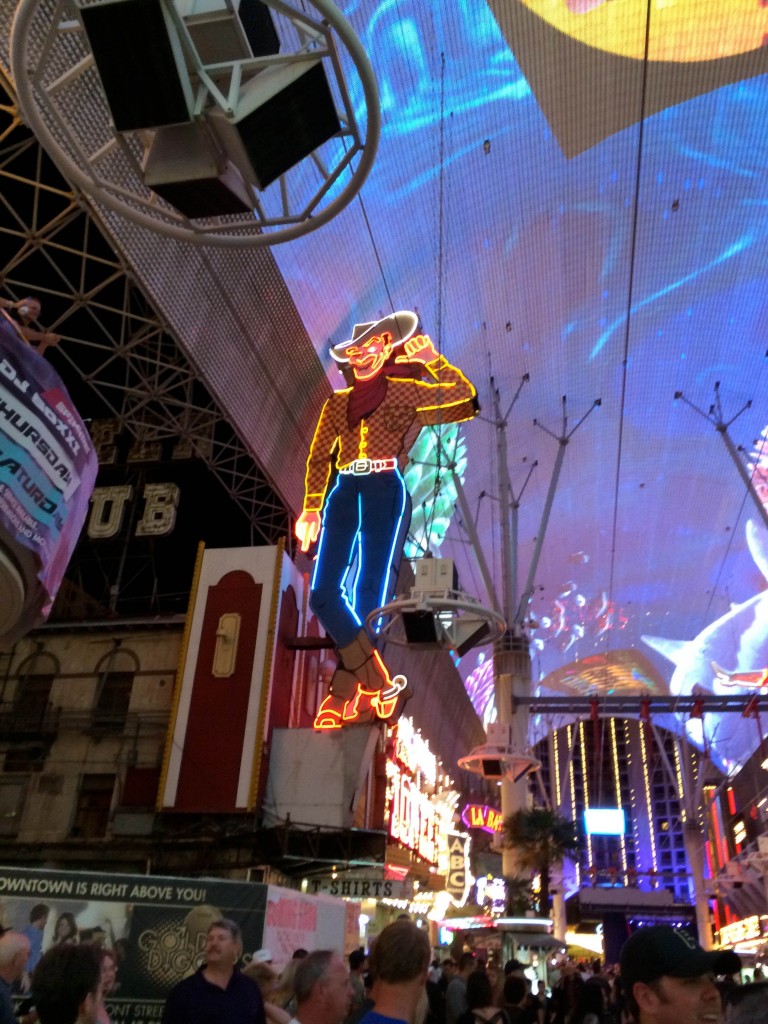 Fremont Street was really fun! I’m glad I finally checked it out. There were tons of people there, lots of street performers, and so many shiny, blinky lights! There was a huge arched screen over the whole street that showed little videos and stuff and there were ziplines above the crowd. We watched as people did the zipline just above our heads. It looked like fun! It was around 9:30pm at this time and we were both hungry.

We ducked into the Golden Nugget–which was actually really pretty–and got dinner at The Cadillac Cantina. It was a cute place despite being a sports bar. Neither of us are tequila fans so Anna got a sangria and I got a glass of wine. Dinner was enchiladas and the food was better than I expected. It was upscale Mexican food that reminded me of some of the yuppie Mexican restaurants here in Portland. 🙂 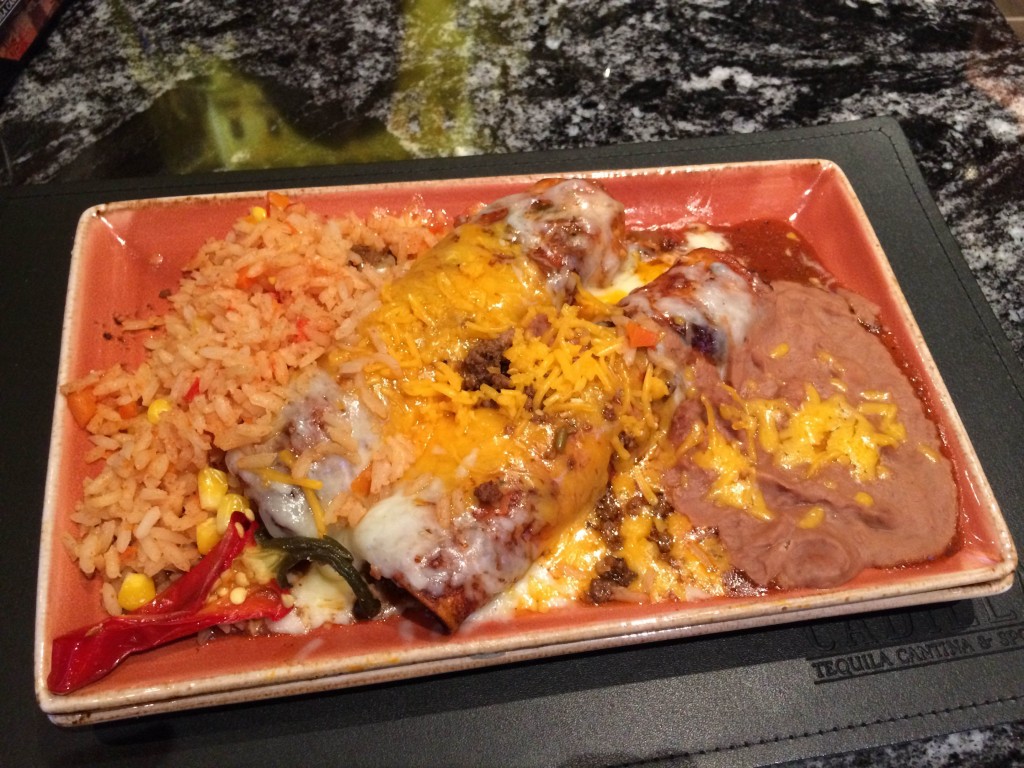 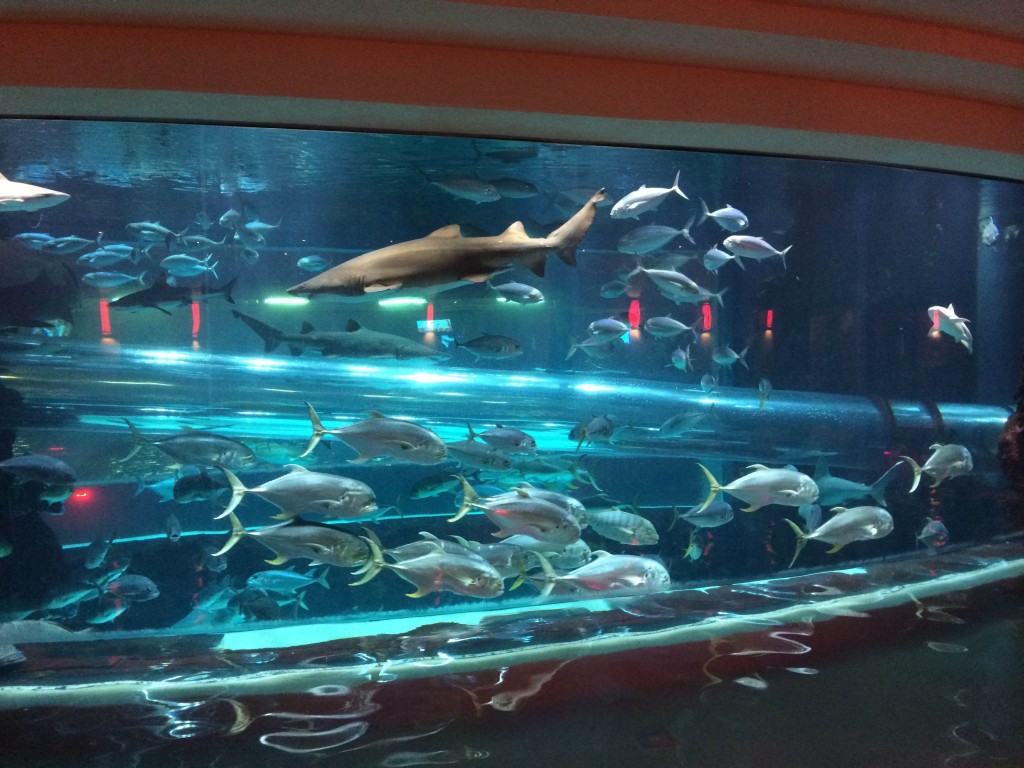 The Golden Nugget is a pretty hotel and the pool looked fantastic! There were lounge chairs INSIDE the pool, there was a huge shark tank in the middle of the pool that had a slide/tube that you can go down that went inside the shark tank. There were also lots of cute lounges and fire pits. We walked around Fremont Street for a few hours and then took the bus back to the hotel. It was around 12:30am when we called it a night–a know, party animals, aren’t we?! 🙂