My friend Tiffany recently signed up for the Blue Apron food service and I guess because of that she got to send some friends a freebie. She sent one to Michael and I and I signed up for one week to give it a try. I was kind of curious to see what exactly it was and how the food was. I didn’t really know much about it so I read up on it at their website (and I see that a few other bloggers wrote some reviews of them). The free week gave us three meals for two people. I was not contacted by Blue Apron to do a sponsored post, but I did technically get the week of food for free thanks to my friend Tiff. This review is on my own and my own opinions. 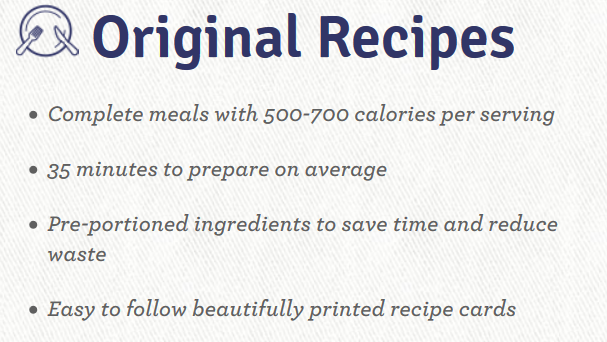 Not knowing much about it, I liked the concept, but wasn’t sure if it was for us. It seemed like a good idea if you want to eat healthier and don’t know where to start. They claim the calories are 500-700 per serving and I was going to check that on my own to compare it. I also like that their website has recipe ideas that anyone can see, not just members.

The box arrived packed with insulated padding and multiple ice packs. Everything was clearly marked. We separated each meal’s ingredients and put them in separate bags for each recipe to keep things straight. 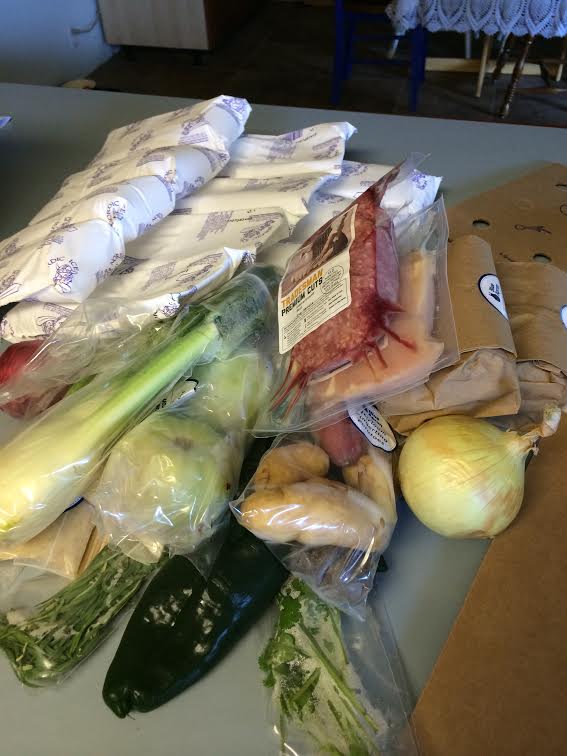 So how was the food?

Michael did most of the work on this recipe before I got home so I just finished up things. He told me it took about 30 minutes to prep and cook everything. The first few bites were just okay. I told Michael that maybe I wasn’t impressed because we cook salmon at least once a week and ours is pretty good anyways. He said that he can see where this would be considered great for someone that doesn’t prepare fish often. 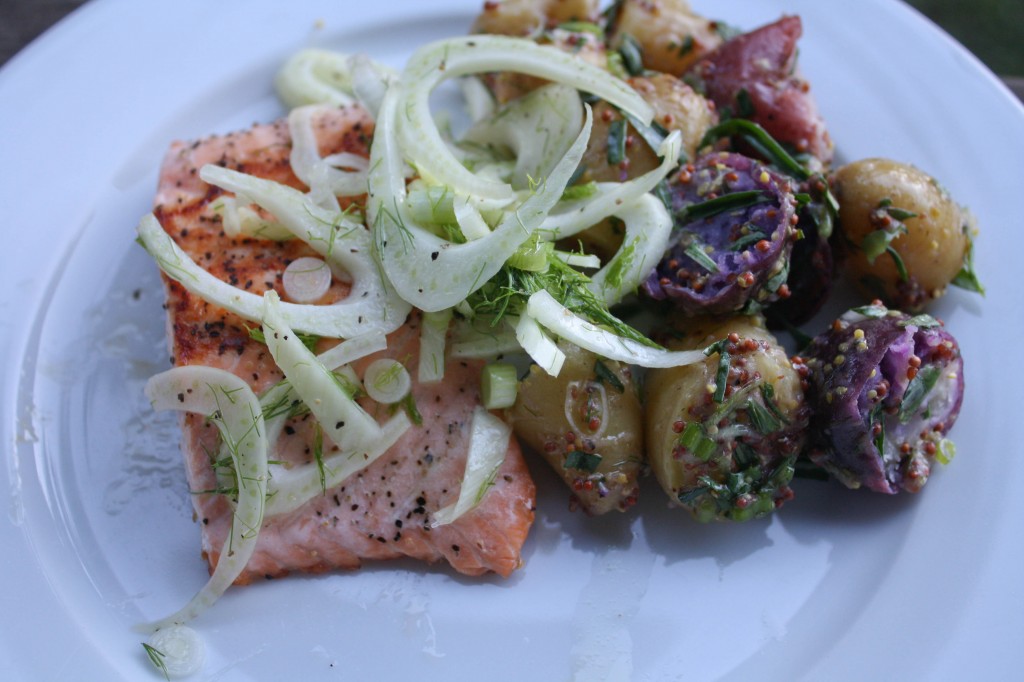 After a few more bites, I was more and more impressed. The sear on the top of the salmon had a little crunch and it was awesome! The potato salad–something super simple and only a few ingredients–was great. The real winner for me? The raw fennel and dill salad. 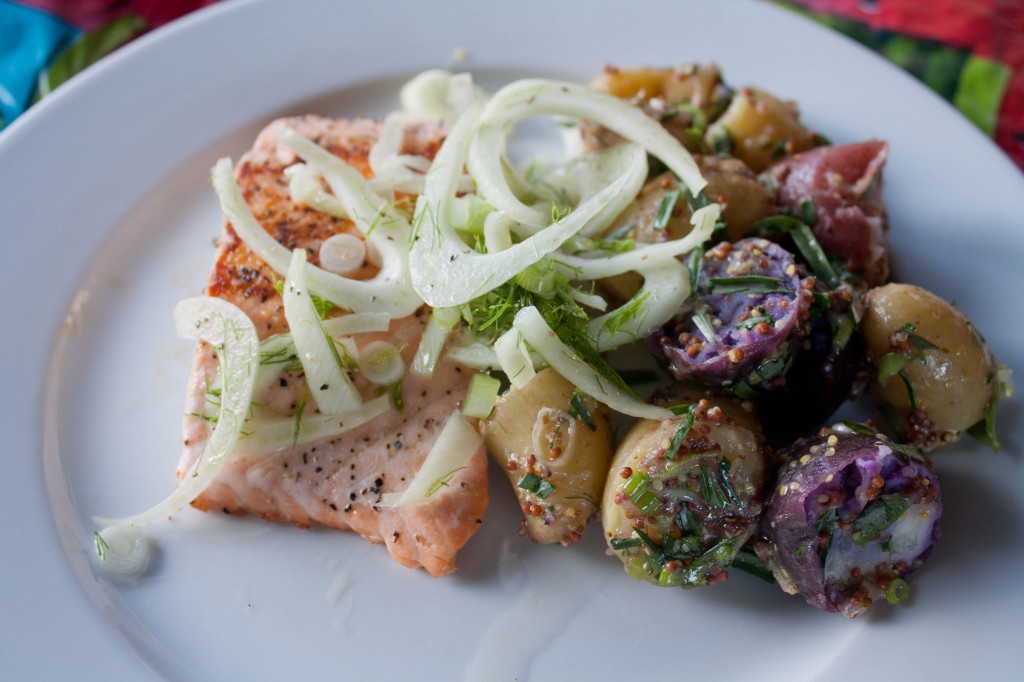 This was shocking because historically I hate fennel. Maybe it’s fennel seeds I dislike? Not sure, but it’s a huge turn-off to me and I was shocked that I loved this raw salad so much. Michael wasn’t as much of a fan so I ended up eating his salad too. 🙂 The dinner as a whole was fantastic and I enjoyed it the more I ate. Hours later I was still thinking about how good that dinner was.

This one was a lot more involved.  It seemed like everything involved had to be done at the same time. I will say that the roasting and removing of the seeds in the pepper was a pain in the butt. Other than that, the recipe was pretty straight forward. One thing I noticed with Blue Apron recipes is that the portion sizes are a little off. They sent packets of rice that should be enough for two people but really it was more like rice for 3 people. 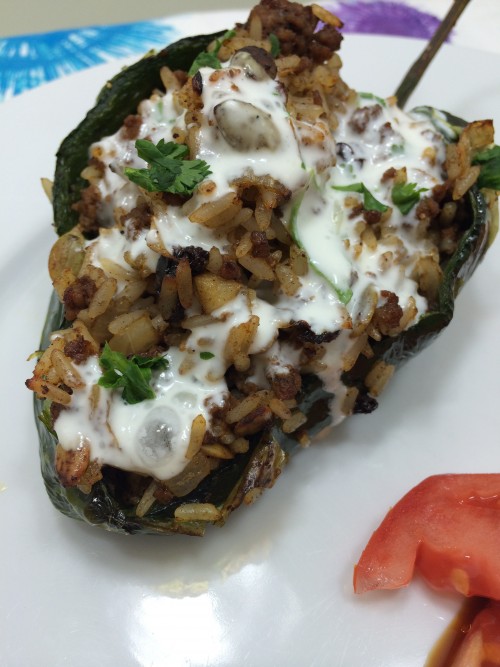 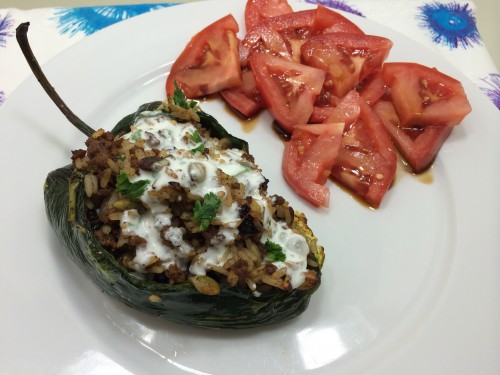 Michael loved this meal. I liked it a lot. There was a ton of the rice/meat mixture. I stuffed the peppers with what could fit and then baked them for 6 minutes. There was still enough of the mixture left over for two more peppers. I chopped up a tomato to have on the side and dinner was served. It was delicious and just the right amount of food.

We actually did this meal for lunch. While I enjoyed it, it wasn’t my favorite of the three and I thought for sure it would be! Part of it was my fault. We were cooking together and I misread one of the steps and used all of the sesame oil in the peanut dipping sauce instead of just half of it. Ooops….One thing we learned with this recipe was that we should have taken everything out of the fridge long before we planned on cooking it. The peanut butter was hard as a rock (I ended up microwaving it for a few seconds to get it creamy) as were the tomatoes. I cooked the rice while Michael cut up the chicken. Then we let it marinade in the soy sauce while I made the dipping sauce and he chopped the veggies. 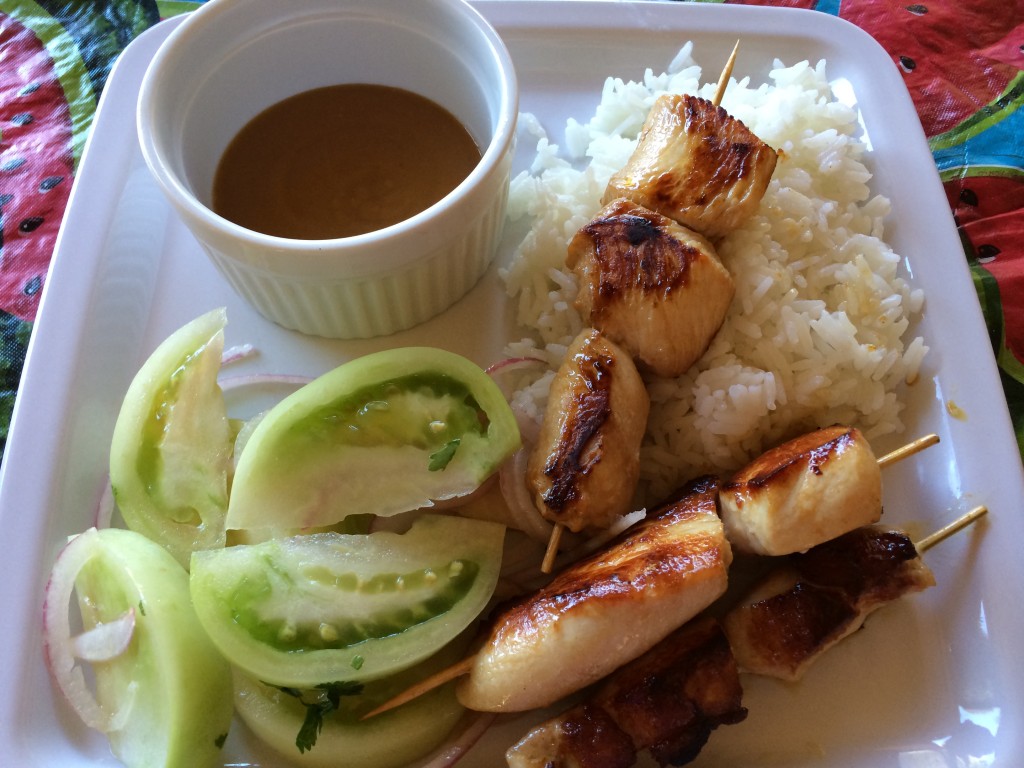 In this recipe, Michael LOVED the tomato and onion salad and I felt it was just ok. The tomatoes didn’t have a ton of flavor and I just didn’t love it as much as I did that raw fennel salad. All in all, though, everything went well together. My favorite part of this dish was the chicken. It was perfectly prepared and the soy sauce flavor was there but not overpowering. There was just enough of the crunch from the sear but the chicken was still soft and not overcooked.

*I liked that the recipes had picture instructions, too. I’ve never cooked Chicken Sate and seeing how they cooked it in the skillet with the kebob sticks already in it was helpful–I know, probably an obvious thing, but I didn’t know.

*The bonus to this is that you don’t have to shop. It’s all measured and delivered to your doorstep. It came in a refrigerated box. Going to the grocery store can be a pain, so if that is something you loathe, this is probably the service for you.

*I liked the recipes and that it took the guesswork out of “what to have for dinner”?

*I liked that I got to use ingredients I’d never cooked with before. I dismiss a lot of potential recipes because it calls for “weird” ingredients or just things I am not familiar with.

*They have options for carnivores AND vegetarians.

*The food was really tasty and the ingredients were nice, high end ingredients.

*But…I’m a little disappointed that they didn’t include any vegetarian meals in our box. I selected carnivore because we eat everything but honestly, it would have been kind of nice if one of the meals was a vegetarian option. I would eat more vegetarian meals if I knew what to prepare–but I just don’t. I’m almost tempted to try one more week and select “vegetarian” to see what they send.

*One of the concerns I had was the cost. $60 a week seems pretty steep. I normally pay around $50-75 a week at the grocery store, but that includes all the “other” things I buy, not just food (i.e. toiletries, etc). Michael does a big Costco run about once a month for the staples–mostly proteins. We get chicken, pork chops and fish from Costco and freeze that so we always have a protein on hand. We also have a ton of ground beef in our freezer right now that I got from my aunt when she slaughtered a cow this year.

So if the meals are about $10 each and you get 3 a week for $60, how does that compare to just buying the same ingredients on your own? I looked at this service as more of a “this is a substitute to going out to a restaurant.” If you look at it that way, it’s definitely a cheaper option, but you are still doing the work.

*Michael’s complaint about the service was that if you have no experience cooking it might be difficult. There were certain words that even he wasn’t familiar with and had to Google (for example: since neither of us have ever worked with fennel before he wasn’t sure which part the frond was).

*The waste annoys me. It comes in a big box, obviously, then everything is individually wrapped in plastic. I get it, that’s the safest, cleanest way to transport it, BUT it creates a lot of garbage. I don’t have that much garbage when I buy groceries on my own.

*It seems kind of snobby. I don’t really know how to better articulate this other than that. It just kind of rubbed me the wrong way–I just kept thinking, Most people can’t afford this service. And in the end, this is why I decided this wasn’t for me. I actually like grocery shopping and while finding time to do it, or having to make multiple trips in one week sucks, it’s still not something I hate enough to skip.

*It didn’t really save us any time–other than a trip to the grocery store. You still had to prep and cook everything, so really….what is the luxury? 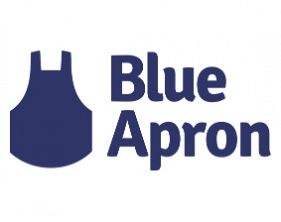 Michael was a pretty big fan of the service. He was impressed with the quality ingredients. I liked that the food was tasty and we got to try new ingredients. I am considering trying it on and off–not consistently but maybe as a once a month thing. It’s definitely too pricey for us to do every single week. And while there were certain things I didn’t like about it, I’d be willing to give it another try. Like I said above, I definitely would like to try some vegetarian recipes.

Have you tried Blue Apron? What was your experience?