So a little while ago I got a jar of black strap molasses because it was supposed to loaded with iron and for whatever reason I was still anemic even though I was taking both a prenatal vitamin that had iron in it AND an iron supplement. I was trying to eat more iron rich foods and the molasses? So not for me. 🙁 I tried it a few times in my oatmeal and just did not like it at all. The flavor was not something I could get past. 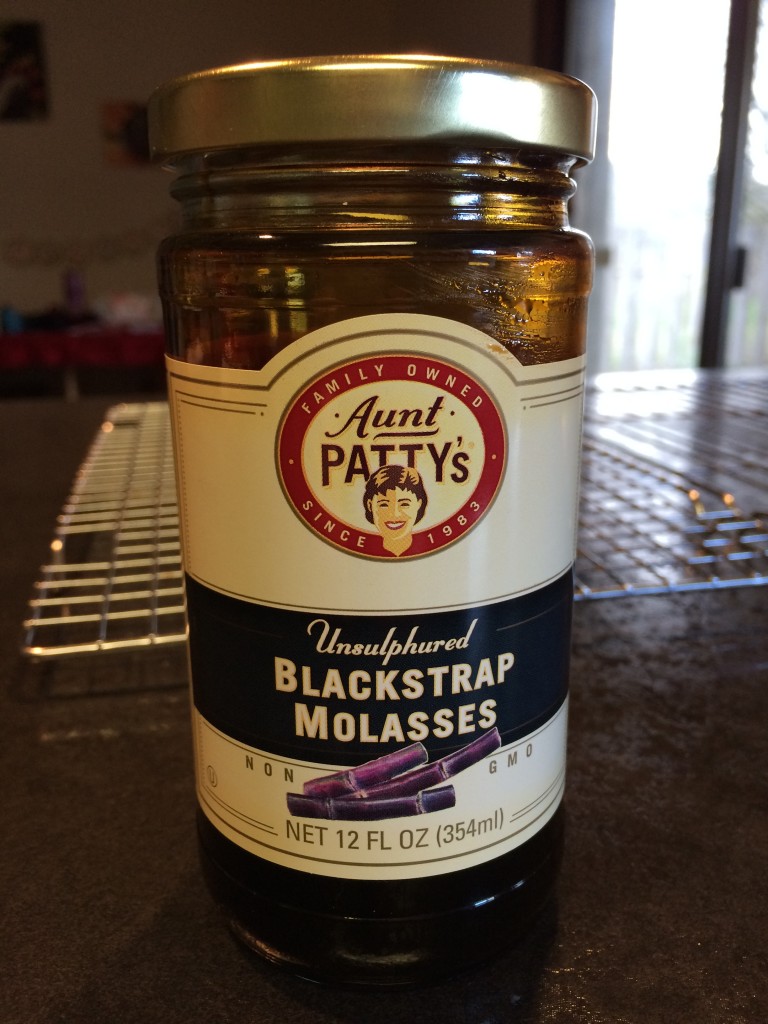 I decided to give it a try in baking. I found this recipe and it sounded really tasty so this weekend I finally tried it! It was rainy and stormy and seemed like good baking weather.

The cookies were super easy to make and took maybe 15 minutes to prep. I baked each batch for 10 minutes on the dot and that worked well. They came out chewy and not crispy or too raw. 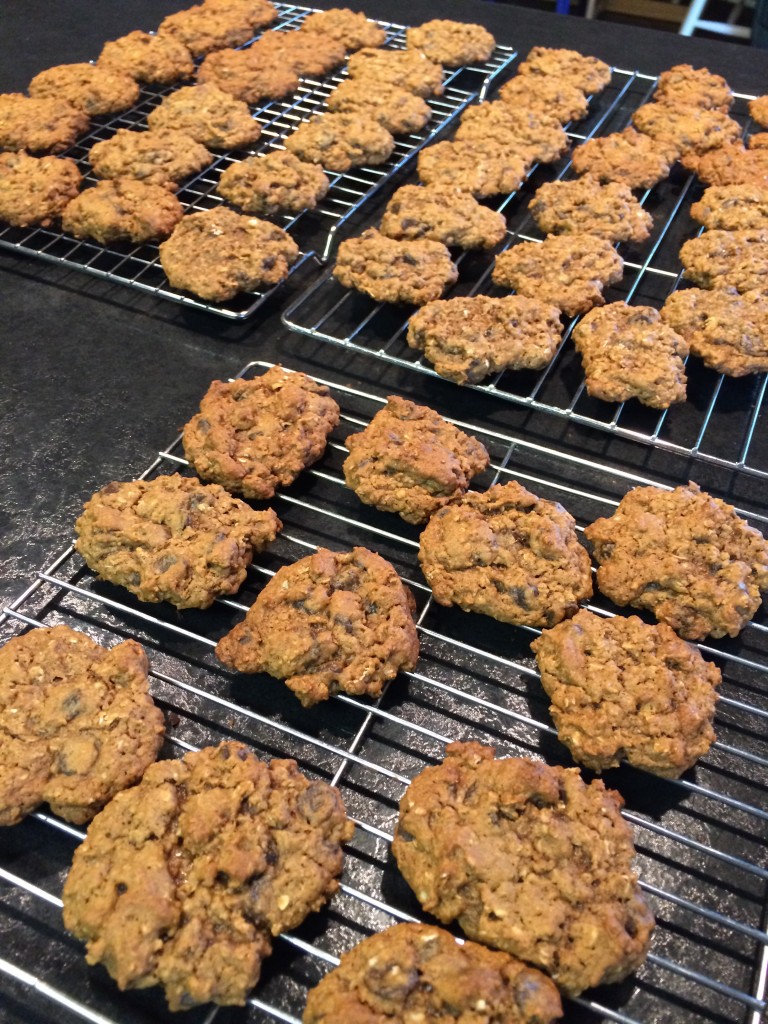 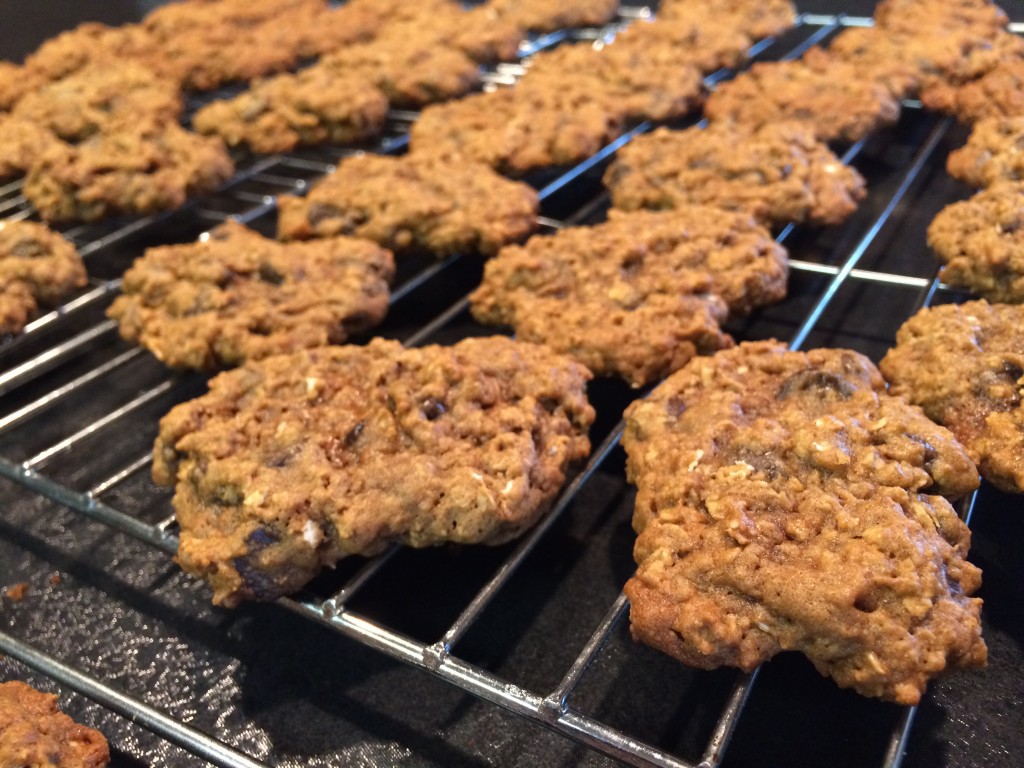 The cookies were FABULOUS. I am partial the oatmeal chocolate chip cookies and these were so delicious. There was a HINT of the molasses flavor but for some reason it didn’t bother me in the cookies–it added to the richness of flavor instead of being off-putting for me. I definitely recommend this recipe. It’s really delicious, easy to make and they came out perfectly! 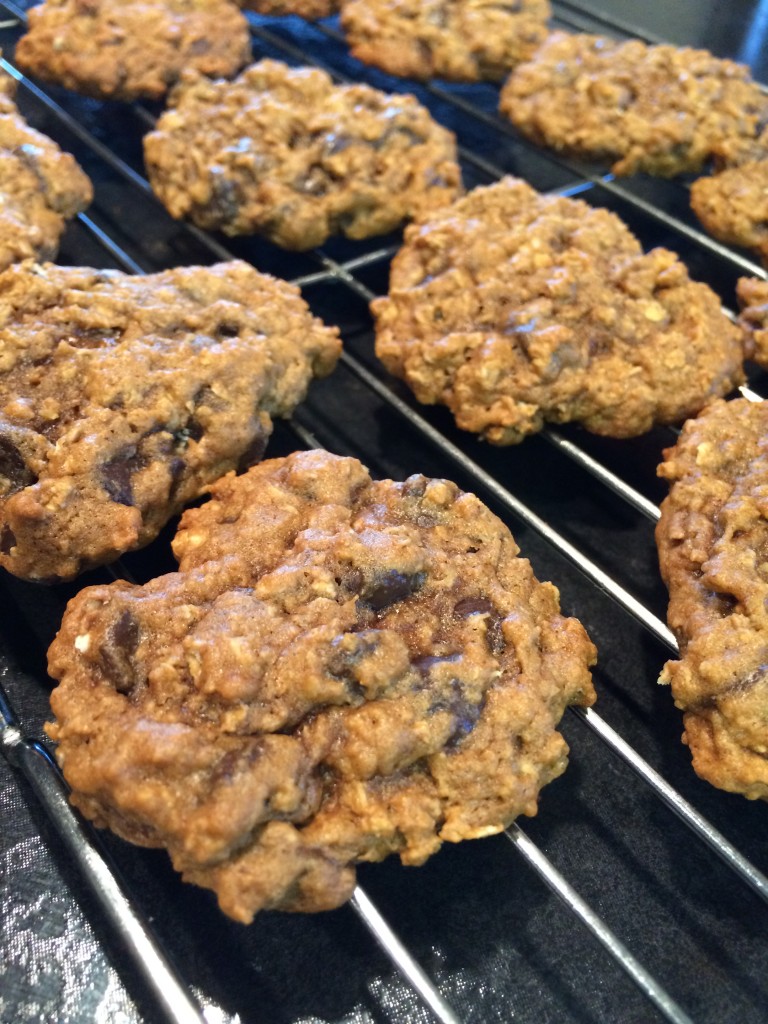 This weekend I also had a lunch date with my friend Erika. We went to Pizzicato. I was craving a slice + a salad! I really like their pizza. Since I’d had a small breakfast and went swimming before lunch I was kind of famished when I got there so I ended up getting two slices of pizza–cheese and the puttanesca (artichoke hearts, tomatoes, basil and kalamata olives) — so good! 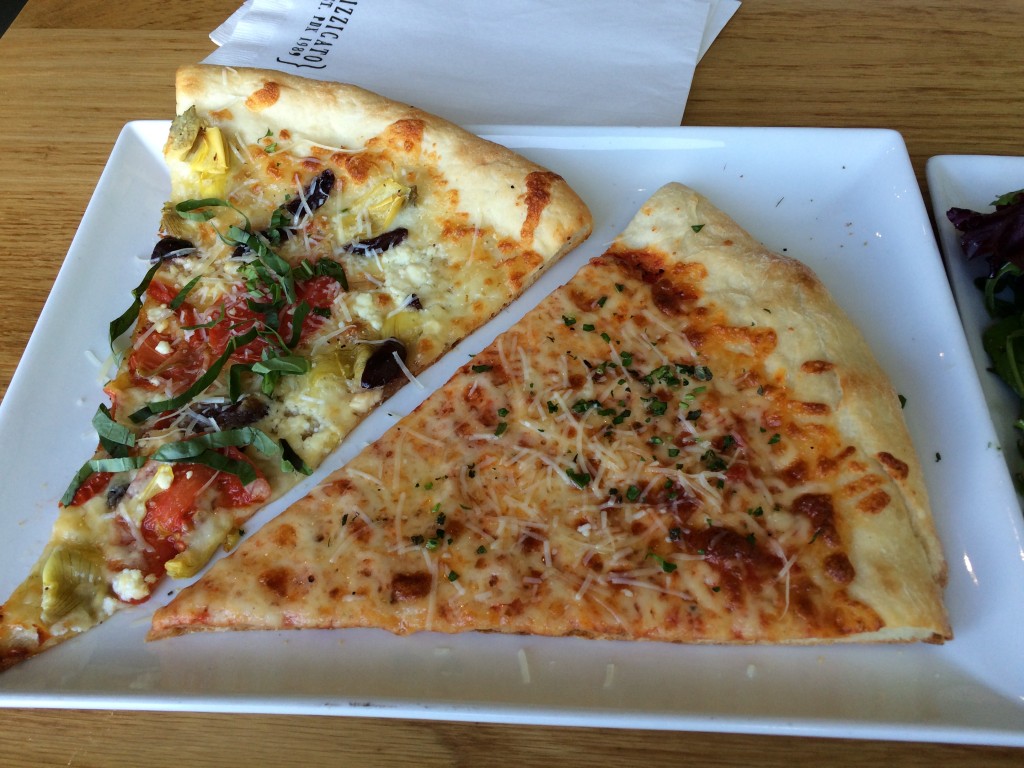 The lunch special comes with a salad and we both got the Arugula and Pear salad (it’s one of my favorite salads). It’s arugula and spinach with pear, gorgonzola and candied walnuts. Lunch was perfect and hit the spot on all my cravings! 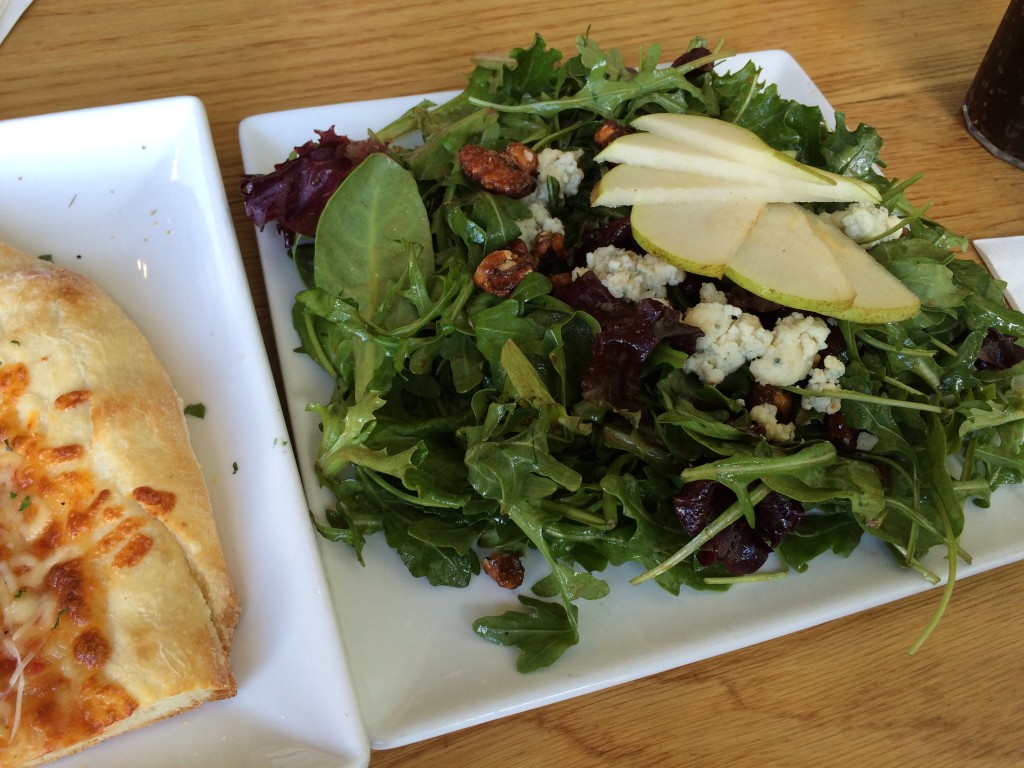 We hung out for a few hours talking and catching up. Last time I saw her was at my baby shower but it was so busy and chaotic it was hard to talk about too much so this was nice….just getting out of the house and catching up with a friend.

Damn, it’s so weird to see old photos of me! This was two summers ago: 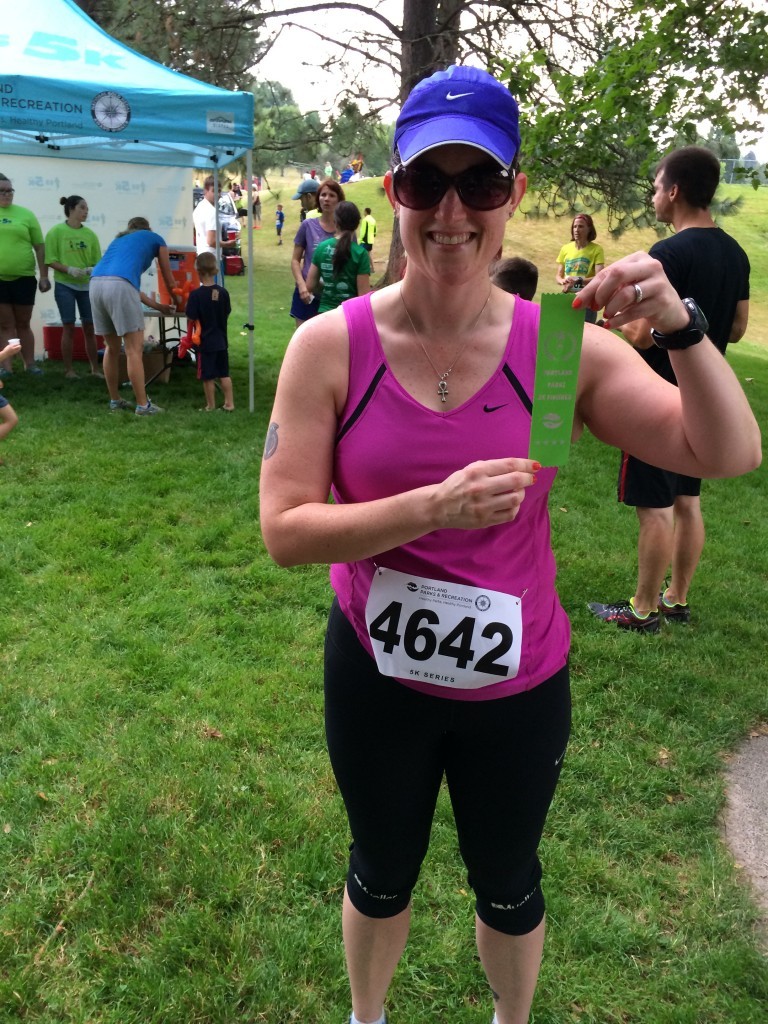 So yeah…I signed up for two 5k’s–one in August and one in September. Michael signed up, too. I was so happy I was able to run two 5k’s last year — both while pregnant. One race was with Michael (his first) and one was with my dad. They were both cool experiences and I’m really excited about doing it again this year.

I am not putting too much pressure on myself in regards to training because obviously, things will be different this year. Once I’m cleared to exercise again by the doctor I’ll start training slowly. Lots of walking with the babe and eventually get back to running. I will probably do the Couch to 5k program again.

That was my weekend. How was yours?

This will be the last post of the Couch to 5k series until…I run my 5k! I can’t wait! I’m really looking forward to it and while I’m a bit nervous about it because my training is going so slowly, I’m excited to be part of a race again.

Reflecting back on my progress I am a little discouraged at how slow I was with the training. Having to do multiple weeks over again slowed me down and made it hard to progress. I think I was being over-cautious. I wrote about the huge jump in the Couch to 5k app before. I really didn’t like how much of a jump it was. It went from running around 8 or 10 minutes at a time to 22 minutes! Basically just a 5 minute warm-up, the run, then a 5 minute cool down.  I disliked this because it made me feel inadequate and I knew I wasn’t really for a big jump like that. As a result I haven’t been using the app much now.

This is the time I started to freak out. I looked at the calender and realized the 5k was only a few short weeks away. I started to panic. I over-analyzed the entire training program, I criticized my progress and was kicking myself or not forcing myself to do 3 runs each week no matter what. Had I done that, I think my training would have been a lot further along. But at the same time, it also could have lead to injury. So who knows.

This week was hard. My knee had a flare up that last about 5 days and really depressed me. I took a break from running and did other things. I was glad I could go back to weight lifting. My hope is that all the cross training I did with the Warrior Room helped prepare me even though I couldn’t fit in 3 runs a week on a consistent basis. Here was the final week before the race:

The run I did on Tuesday -3.49 miles was great! I was unsure about knees because I was coming back from that really bad week. I told myself I’d go slow and just see what happens. I went to the neighborhood track early in the morning and had a lovely run as the sun was coming up. 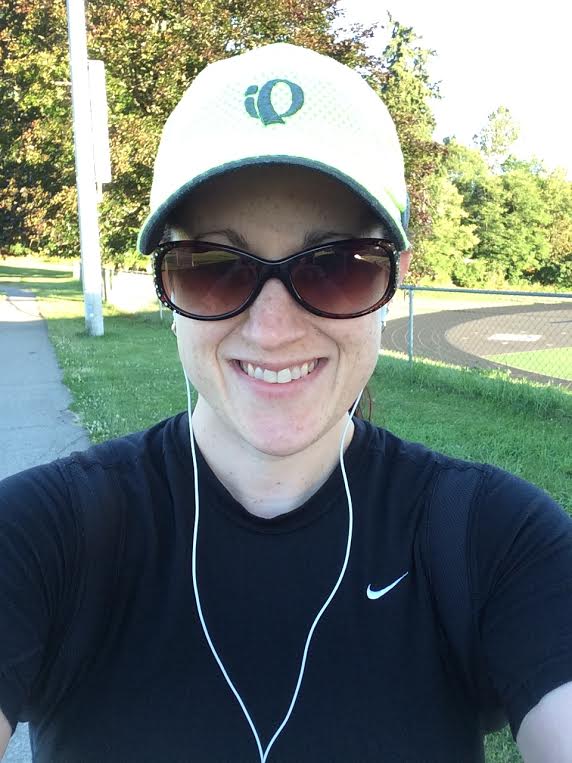 I ran for 1 mile and then walked one time around the track. Then I ran 3/4 of a mile without a walk break. My knees were doing okay and that was encouraging. I walked the long way back to the house and ended up getting in almost 3.5 miles in. 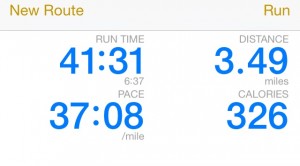 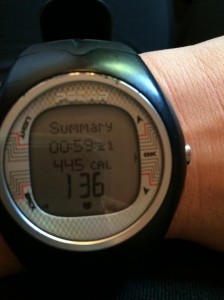 Lots of stretching and preventative icing of the knees. I felt really good all day long, too. After that week I had about 5 days before the race. I took it fairly easy. I went to the Warrior Room, I did some yoga and swimming. I skipped doing any gardening the day before the race because I’ve made THAT mistake before!!! I wasn’t feeling confident going into this and knew I would have to walk some of it. I hoped that it wouldn’t be too much…

Stay tuned for the race recap!