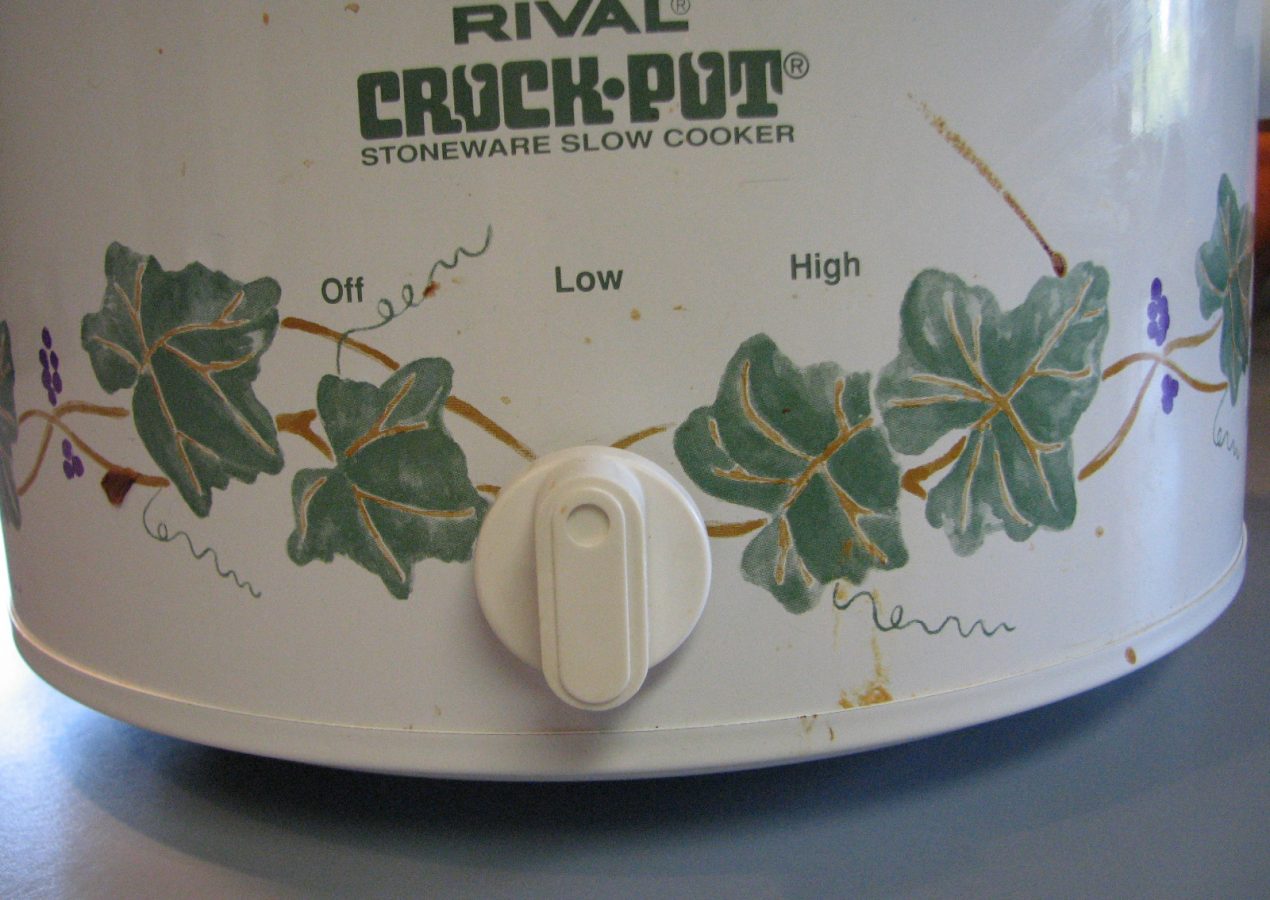 1 can cream of mushroom soup

1 can cream of tomato soup

Place meat in the bottom of the crockpot. In a medium bowl, mix together the two cans of soup. Pour over the beef chunks and sprinkle the onion soup mix on top. Cook on low for 8-10 hours. Serve over rice or noodles.

What I love most about this recipe is how SIMPLE it is. I always have the ingredients on hand. It’s 4 ingredients total and takes 5 minutes to prepare. It’s the perfect meal for the crockpot when you just want to come home from work and have dinner ready. I decided to make this recipe on Saturday night because it was so easy to do.

I usually spray the inside of the crockpot with PAM just to make it easier to clean. The recipe calls for 2 pounds of meat but I usually just do 1 pound (sometimes even a little less).

I get the beef that’s already cubed for making stews and rinse it, dry it and then drop it into the crockpot.

I mixed the soups together in a bowl but to be honest you can make this recipe even easier and skip that step. In a rush you can totally just pour the cans into the crockpot as is and let them mix together in there.

I sprinkled the onion soup mix package on the meat and then poured the soup mixture on top.

I add a lot of freshly ground black pepper as well. There’s no need to add extra salt because the onion soup mix is pretty salty.

Turn the crockpot on low and let it do it’s magic! I prepped everything after the gym on Saturday and then left the house for most of the day to see my friend Robyn and run errands. By the time I got back to the house 6 hours later the whole smelled warm and inviting with the aromas of crockpot food. YUM.

According to this calorie counter recipe analysis, the recipes is about 331 calories a serving (not including the rice or noodles).

I cooked the rice in my rice cooker. I realized at the last possible moment that I did not have quite enough brown rice so I supplemented with a little bit of whatever rice I could find in our pantry.

We happened to be babysitting our friends’ 6 month old baby Saturday night. I’m glad that I decided to make something easy in the crockpot while we watched the baby for the first time. I don’t think we could have (sanely) made a complicated dinner AND babysat.

The baby (Norah) “helped” me while I made the rice. She was a bit fussy whenever I left the room so she came into the kitchen with me and kept me company while I got the started in the cooker.

The crockpot was basically done. The rice cooked for about 25 minutes and then I started steaming the carrots. When the carrots were cooked I added a little Goddess Dressing to them. I really could have just tossed the carrots into my dish with the rest of dinner but it had been too long since I had some Goddess Dressing.

So Norah was finally sound asleep in the other room and we both had a glass of what little red wine we had left.

Dinner was finally ready! After hours of sitting in the house smelling the dinner cooking….tempting me…taunting me…it was finally ready. I topped the rice with the gravy and the chunks of meat.

It was hearty and felt like comfort food. The meat was so soft it fell apart when I put my fork in it. Perfect dinner!

The original recipe also called for chopped mushrooms but since I don’t like mushrooms I leave it out. I’ve often wondered if I could put chopped carrots into it and whether or not that would add something to the recipe or just ruin it. I haven’t been brave enough to give it a try.

Try this recipe on a weeknight when you know you’ll be too tired to cook. It will be a lifesaver. AND it’s tasty!

QUESTION: Have you ever made something like this? What’s your go-to crockpot recipe?

K is for Keeping Sane

I Stuffed My Face When Bored