You see I’ve been through the desert on a horse with no name
It felt good to be out of the rain
In the desert you can remember your name
‘Cause there ain’t no one for to give you no pain
La, la …

This post I am particularly excited to write about. In fact, I had happy tears of joy in my eyes as I wrote this…Thursday I woke up early to go for a run with my Dad. My dad’s been down here in Tucson for almost a month now and he’s mapped out a 3.4 mile run from the house.

I hadn’t run outside since September. My last “run” was a week after Hood to Coast when I realized I was injured in a serious way. 2 months of no running + rehabbing + physical therapy + DREADMILL = a very sad Lisa.

I had a million thoughts in my head:

“Could I even run outside?”

“Have I lost all of my running stamina because of my injury?”

“Have I lost all of my running stamina because I’ve been stuck on the treadmill for months?”

“Will this be a big mistake?”

“Will I regret running and ruin my whole vacation on Day Two?”

F*** it!! I’m sick of this injury holding me back! I got geared up, took my Prednisone and packed my inhaler in my shorts pocket and we set out. I told my Dad that it was okay to leave me behind if it turned out I was slow or too injured to keep up. 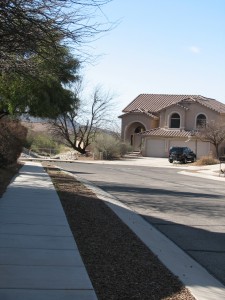 We jogged out of the house development and onto the main street. 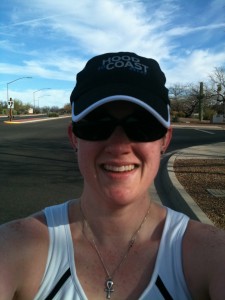 The roads here in Tucson are amazing. So nice and new. Plus it’s a huge cycling town. I saw SUPER SERIOUS cyclists everywhere. That means there’s humongous bike lanes everywhere. There were so many cyclists–and triathloners! My dad and I ran in the bike lane. 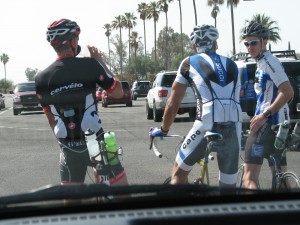 So far I was doing well. I could keep up with my dad, I didn’t feel like my heart was exploding, I wasn’t out of breath, my knee and my leg felt good. I suddenly had a burst of confidence and happiness! Apparently all the working out I’ve been doing this winter has paid off! I have NOT lost any of my running conditioning! 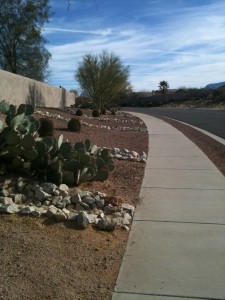 Then I saw it!

Oh my GOD! A SNAKE! I saw it mid-stride, let out a yelp and said “Snake!” And jumped over it –never faltering in my run. Luckily it was dead. It sure didn’t look like it at first! 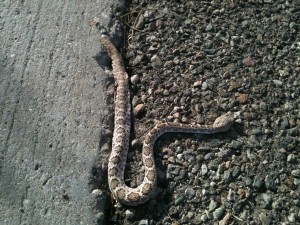 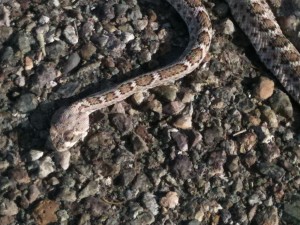 We kept running. The road started going uphill and my dad said that if I couldn’t make it up the hill he’d wait for me at the top. I said I would probably have to walk the hill. I wasn’t sure if tackling a big hill on my first run was a wise idea. 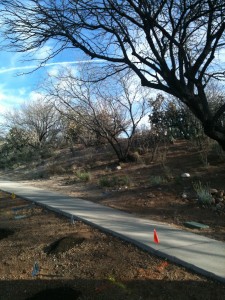 But my competitive spirit kicked in and I just couldn’t walk after having such a good run so far. I was HIGH. I had that runner’s high AGAIN! YAY! I kept running. I didn’t walk at all! We got to the top of the hill, turned around, headed back to the house. I ran the ENTIRE WAY with no walking, no resting and most of all NO PAIN!!!! 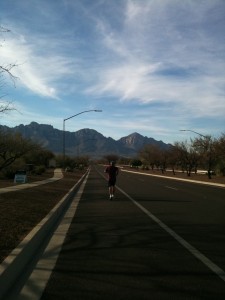 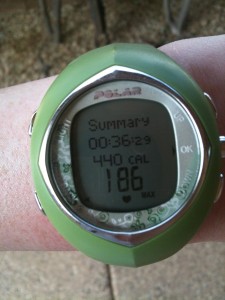 I was so excited. I knew I should take it easy and not get too ahead of myself but this is amazing progress in my book. You cannot imagine how STOKED I was the rest of the trip. I freakin’ RAN! 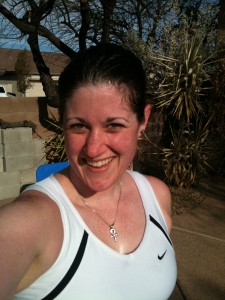 Check out that sweat. I was GLISTENING HAPPINESS! We got back, I stretched a lot, showered and then we drove up the road to see Biosphere2!

I visited Biodome. Nope, Pauly Shore was NOT there. 😉 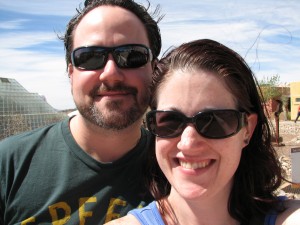 The original plan was to see the Kartchner Caverns — living caves! It sounded so cool but I guess everyone’s on Spring Break because it was booked up until we were leaving. No Caverns. Boo. 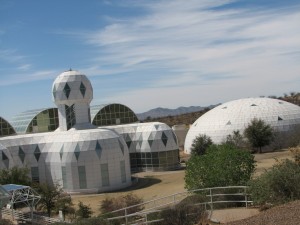 Biosphere was a very cool alternative. It took a few hours for the tour and we had a great time. I’ve always been interested in environmental sciences and the idea of being locked in the Biodome for 2 years was absolutely fascinating to me. 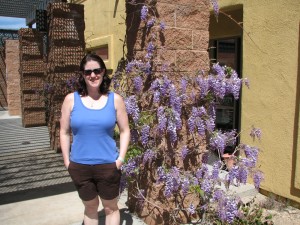 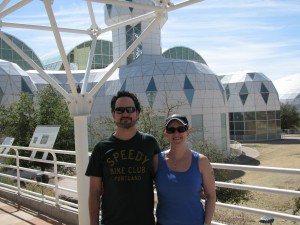 The tour was a lot of fun. Apparently in 1991-1993 when the first group was locked in Biosphere they were eating 1200 calories a day. They ate mostly a vegetarian diet except for once a week they got to eat meat. But they had to slaughter the animal and prepare the meat themselves. Basically they were living on whatever was in the Biosphere and what they could grow. 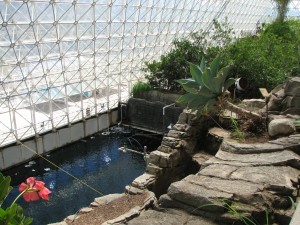 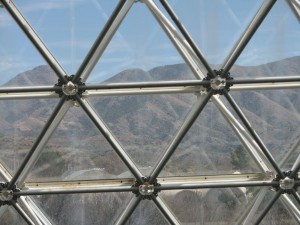 After the tour of the whole Biodome–the Lung, the Desert, Rainforest, etc. we got to see the living quarters a bit. 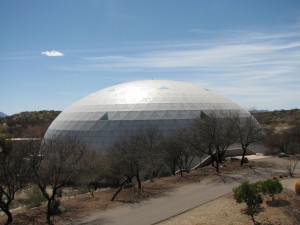 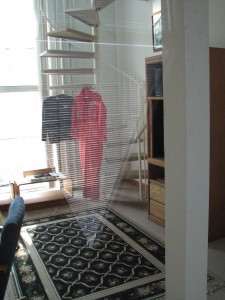 It was a very cool way to spend the afternoon. Because we were there late we missed lunch so we stopped at the local grocery store to pick up some stuff for dinner. 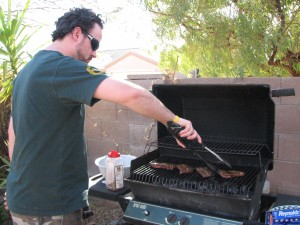 I immediately looked for a local beer. Guess what? It was all PORTLAND BEERS! Are you kidding me? I laughed out loud at the fact that we could not find a local beer but instead we found the usual: Deschutes, Mirror Pond, Widmer. Ironic. 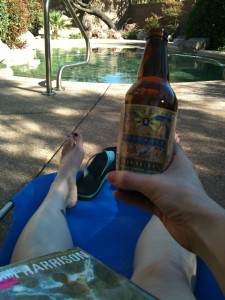 I finally found an Arizona beer– Nimbus. I bought a 6 pack and we went back to the house for an early dinner. Michael grilled up steaks outside while I lounged next to the pool with my beer, a good book and a cool breeze. It was absolute heaven. I could not have been happier. It was exactly what was needed! 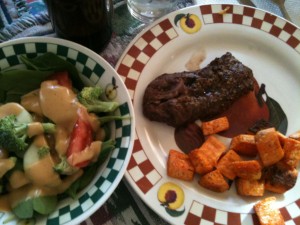 After dinner Michael and I went for a walk around the neighborhood together. 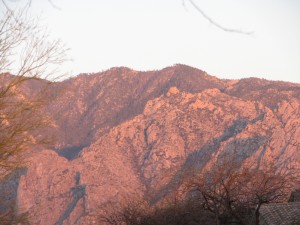 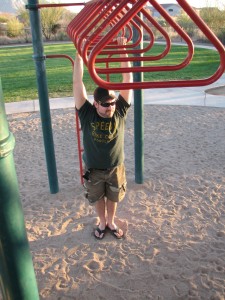 It was a nice stroll, we got to see the Super Moon, played in the park and then saw the sunset over the hills. It was an amazing sunset. 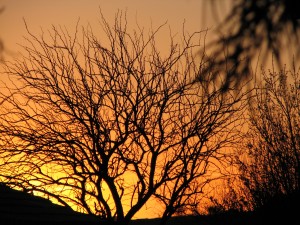 It was a great day!

QUESTION: Are you afraid of snakes? Ever run in the desert?