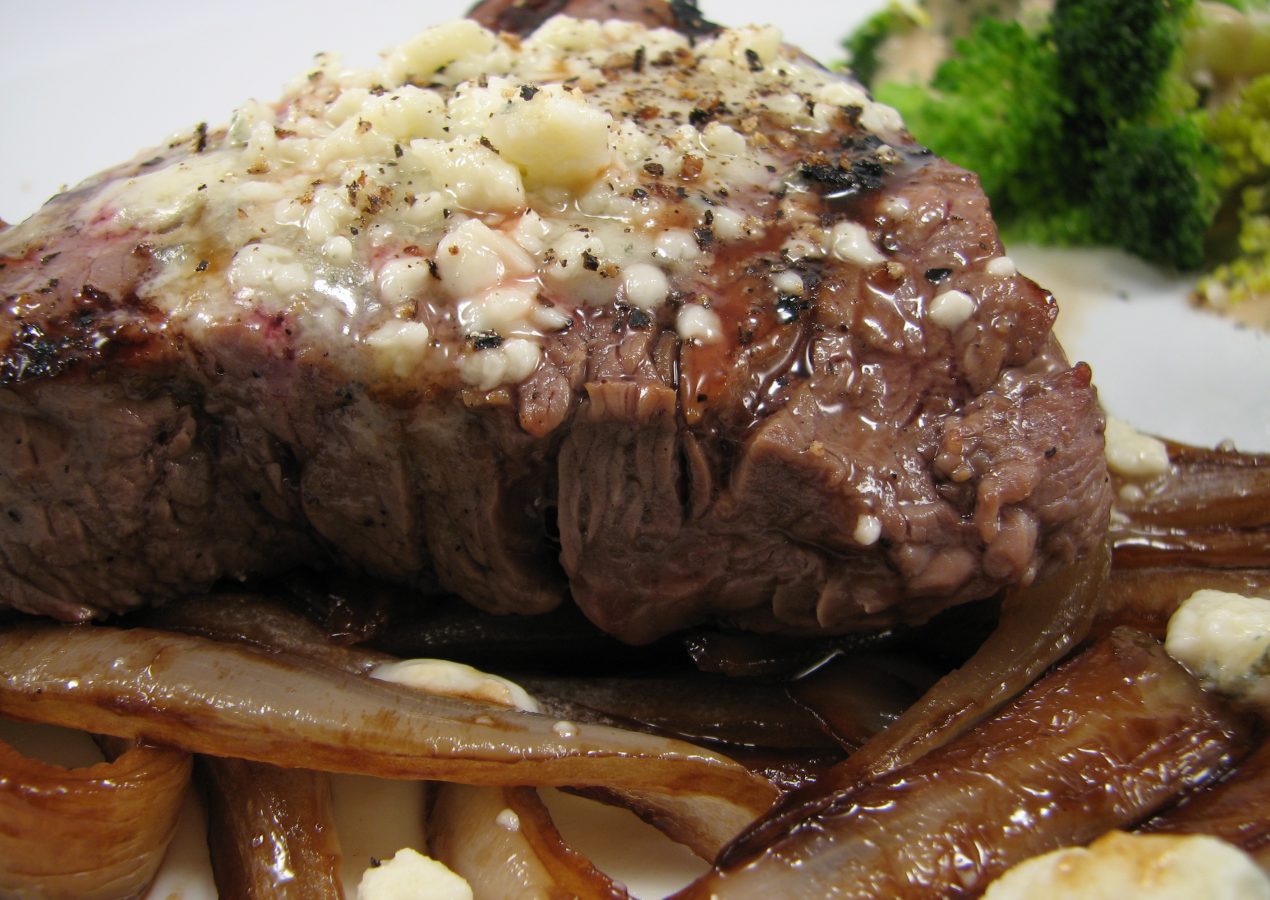 For dinner on Sunday night Michael and I made this recipe that I found. Sunday was our official anniversary, but we aren’t celebrating until next weekend. I bought steak at Trader Joe’s–not filet mignon but that’s only because TJ’s didn’t have it. So far in my experience the meat I buy at Trader Joe’s is a million times better than anything I’ve gotten at any other grocery store. There’s little to no fat or gristle on the TJ’s steak and it just tastes better. It tastes healthier. It’s worth the extra few bucks in our opinion.

Since we’re celebrating officially next weekend we didn’t do anything fancy Sunday except for the dinner. And dinner was so good I wanted a second dinner!

First, I think the calories on this recipe are way off. When I went to count my calories in the MyFitnessPal App it calculated it as closer to 600 calories, which is what I used. I bought the Gorgonzola at Trader Joe’s as well and it was excellent–and cheap!

We halved the recipe for just the two of us so we used half of a large onion instead of two large onions. I could have used more onion so I think in the future we’ll use the whole onion.

Caramelizing the onion was pretty simple and didn’t take very long. We’ve done it only once before, when we made homemade French Onion Soup for my birthday dinner. I love caramelized onions! And it went so well in this recipe. While Michael cooked the onions (adding broth, salt and brown sugar) I prepped broccoli to steam as our side.

Michael grilled up the steak the usual way but instead of marinating it he just used salt and pepper to season it. I steamed the veggies and then he topped the steak with the Gorgonzola to melt it a bit.

I topped the steaks with just a little bit of additional cheese so it had the texture of the crumbles too. I was glad I added the broccoli because it went nicely with all the other flavors (I used Goddess Dressing on my broccoli).

The dinner turned out PERFECTLY. All the flavors complimented each other in a surprising way. You wouldn’t think the sweetness of the onions would go well with a strong cheese but it did. The onions tasted liked candy (which I love, of course) but the cheese made them less sweet so they weren’t overpowering.

Everything was so tasty that I was sad when the food was gone. I wanted an entire new dinner just so I could enjoy it again. This recipe is a total winner–higher in calories than the author calculated but still a winner. (Maybe filet mignon is a lower calorie cut of meat? Not sure.) This recipe will mostly definitely be a repeat in our house!

QUESTION: How do you use Gorgonzola cheese? Any other recipes out there I should try?

How I Spent My Weekend