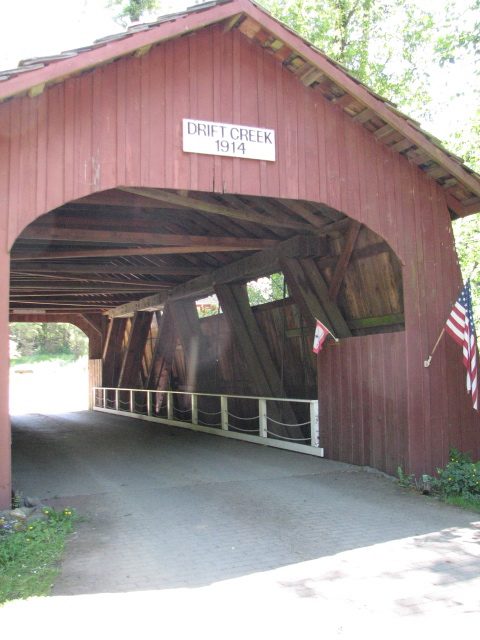 Friday I got home to Michael’s car packed and he was ready to go on our anniversary weekend away. He informed me that I was driving and that he was the navigator. I climbed into the driver seat and found this:

A clue! I still had no idea where I was going or even if I packed the right stuff. I said okay and we stopped at 7-11 for road trip snacks (I got a Perrier) and I drove us South to Woodburn. The first stop was the Outlet Mall–which was a good idea because in my haste to pack I forgot to bring any sort of jacket of long-sleeved anything. I bought a cheap sweater at the Gap and then we went back to the car where I found Clue #2:

Now Salem isn’t exactly a “hot spot” for fine dining but apparently it was en route to our final destination. I drove us to Salem and we found Christo’s Restaurant. Michael had everything planned for this trip. He researched the best rated place in Salem and that’s where we went. Christo’s was a Pizzeria and Italian joint with the typical things on the menu.

We both got the Greek Salad to start and a small pizza to share.

The Greek salad was stellar. We both raved about it. Not only was the dressing tangy and yummy but the spinach was fresh, the olives were salty and the feta cheese was strong. The salad came with two long bread sticks which added a lot to the salad too. We couldn’t stop talking about this salad. The pizza was good–nothing compared to Apizza Scholl’s or our own but still good. After the romantic dinner in the dimly lit restaurant that played good jazz music, we were off to our next destination. I had another clue waiting for me in the car. And as soon as I saw the clue I knew my speculation was correct!

The sun was setting over the hills as I drove us through the Willamette Valley.  We arrive at Grand Ronde when it was dark: Spirit Mountain Casino!

We checked into the room and got situated and then talked about the plan for the evening. It was nearly 10 p.m. by this time. The room was HUGE. Michael had splurged for a really nice room with a king sized bed.

We had a few different options for what we could do. I told Michael he should play poker (he loves it and he’s good at it) so Michael went to the poker room and I headed down to the roulette table!!

I love roulette. I know it’s totally not a game of skill and it’s probably the worst game to play in a casino in terms of chance but I love it. I love how exciting it is. I totally get a rush when I have chips on the table and the little white ball is spinning around. I’m a really conservative player but I play solely for fun. I almost always WIN or come out EVEN. I rarely have a bad time!

I was able to play for several hours making a little bit, losing a little bit and eventually I walked away with $1 plus the original amount I bought in at. I could have kept playing but I wanted to be able to walk away a “winner”. The next morning we had breakfast at the casino. I ate two sausage links, most of the eggs and half of the biscuits and gravy.  We also got a complimentary fruit dish and coffee cake. We ate all the fruit and I had a few bites of the coffee cake but didn’t really want it.

Michael informed me that we were only staying at Spirit Mountain that one night. Then I got another clue!

While Michael was checking us out of the hotel, I snuck over to the roulette table, drank a cup of coffee and had a few successful hits:

Michael won a little bit at poker the night before so we left Spirit Mountain feeling pretty good about our trip! I had no idea where the next location was. The day was GORGEOUS. It was hot and sunny out as I drove to the next location. We went by an old covered bridge and I wanted to stop and take some pictures.

The bridge was built in 1914. Oregon has TONS of old covered bridges and I’d love to do a day trip to see them all. It was cool. We got back in the car and drove up the old road and then got off onto an old forest road.

The day was sunny and gorgeous but the single lane road winding up the side of a mountain was slightly terrifying. Especially when other cars came down and we had to try and fit two cars in a single lane road.

We arrived at our destination: Drift Creek Falls! The day was perfect for a hike. I changed into my shorts and we set off on the trail.