Where Hipsters Go to Die 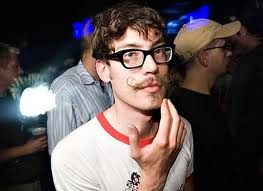 Portland. The City of Roses. Bridgetown. Stumptown. Rip City. Portland has more coffeeshops and breweries than rain clouds. Portland is also known for what I affectionately call “Ironic Facial Hair.”

You can find hipsters in a number of places here in Portland. A good place to spot them would be a brew pub in the Pearl District, Voodoo Donuts downtown, the Doug Fir and apparently The Wood’s Bourbon & Bingo Night!

I have never in my life seen so many Hipsters in one place. It was an invasion. Full of flannel sweaters, mountain man beards and ladies in pretty hipster dresses. It was awesome.

I went to The Woods with my friend Kat for a little lady’s night with bingo. I’ve never been to The Woods before and I’ve been wanting to check it out for ages. It’s an old house (it was an old funeral home). Very cool and trendy.

The doors opened at 8 and supposedly Bingo started at 8:30pm (it really started about 9). It was free to get in but each Bingo sheet was $1 (cheap!). We each bought two sheets to do two rounds.

The place was absolutely packed! I was shocked there were so many people out on a Monday night that late. Eventually the place was standing room only. Kat and I snagged two seats at the bar and got caught up over drinks.

Eventually the game started. We were so excited! There was definitely an air of excitement in the room, the crowd was pretty rowdy. I was surprised. I guess I pictured a bunch of old ladies with blue hair.

The guy running it was hilarious and fun. I had an absolute blast. We did not win, but it was fun. It’s every Monday night at The Woods. If you’re in Portland and looking for a cheap date and tons of fun I really recommend this place. I will most definitely be back.

QUESTION: Have you ever played Bingo? What’s your city known for?