I’ve been posting so much about puppies lately, I think it’s time to share some kitties. Below is Maya. You don’t see her much on the blog because she’s a scaredy-cat and hides a lot. She’s very skittish and flees when people enter the room she’s in. She’s silly. I wish she was more affectionate because she’s such a small and gentle cat. 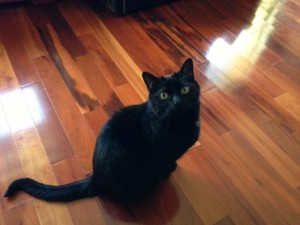 And then of course there is Fat Kitty. He’s always around. When I watch TV, this is what it means: 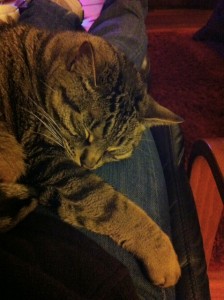 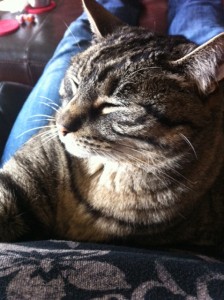 Two different days and pretty much the same view for me. No complaints here! It’s awesome. The cats are doing good. I recently got them one of those bubbling cat water fountains. Supposedly it’s supposed to entice them to drink more water. I put it together over the weekend and it took about three days before they finally drank from it. I think they were scared of it. Fat Kitty stalked the water fountain and then would look at the bubbling water, then look at me, then back at the water. Finally they drank from it! So there you go, an update from the fur-babies in my house.

The other night I met my friend Sam for dinner at Tarboush. It’s a Lebanese restaurant I’ve wanted to try for years and just never got around to it. The place is on SE Hawthorne, a very popular place to visit in Portland, in an old Victorian house. There’s also a ton of vegan, dairy-free and gluten-free options marked on the menu.

Sam started with the TarBoush Blood Simple drink. It was a bunch of ingredients I’d never heard of (Fernet-Branca, Canton Ginger Liqueur, lemon & lime juice, and Pomegranate Grenadine) but it was tasty–sweet and tart at the same time. 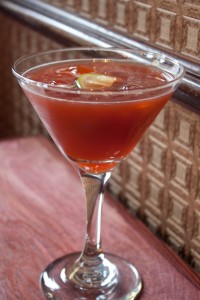 I got a glass of Lebanese white wine (Masaya Vin Blanc), it was like a dry pinot gris with a hint of pears. I liked my wine a lot. I asked the waiter (who was super nice and attentive) for advice because I didn’t recognize any of the Lebanese wines. This was a good choice. 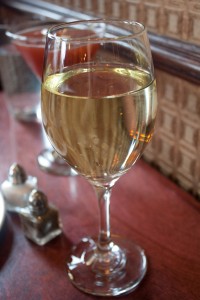 Sam and I shared a happy hour appetizer of “Foul Mouddamas,” it was fava beans cooked with garlic, lemon juice and olive oil. It was really tasty. I ordered the Lamb Shawarma Plate. I almost always order lamb when I go to Middle Eastern restaurants because it’s not something I ever cook at home. It was so good! I ended up eating a little more than I should have. It came with basmati rice and tahini sauce. 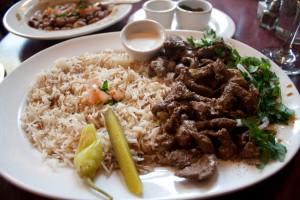 After eating a little too much, I took the rest for leftovers. The next day I had a salad for lunch and topped it with some of the lamb. After dinner Sam and I wanted to continue our chatting because we were having so much fun so we went for a walk on Hawthorne. It was such a nice evening and it almost felt like summer–a warm night that was still light out at 7pm. We ended up at Cup and Saucer where I drank too much peppermint tea and ate some coffeecake. 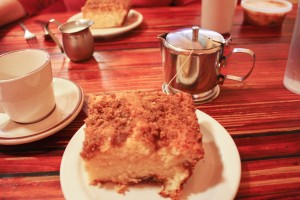 Don’t be fooled by the picture, the coffeecake was huge. It was a cream cheese coffeecake and they warmed it up before serving it. The crunchy, sugary topping was the best. I asked for a box immediately and cut the cake in half so I wouldn’t eat the whole thing!

Before I knew it, it was 9pm and I was getting sleepy. When I got home Fat Kitty was anxiously awaiting my return from the front window, saw my car and then raced to the kitchen where he flopped onto his back with his legs in the air. This is what I come home to every day: the “come scratch my belly” pose! It makes me so happy. 🙂

Have a great weekend guys!

I started my holiday weekend with a girl’s night out with my cousin Anna. We met for a happy hour at a bar near my office, had horrible food but an okay beer, and then we walked what felt like a million blocks (ok maybe it was only a few) to the Portland Art Museum. I love museums; I’ve been to the Portland Art Museum many times but I still have not seen everything there. I visited one of my favorite paintings–

And then we saw the photography exhibit we went there specifically for (and were disappointed by). We finished our evening with an absolutely amazing exhibit by the artist John Frame. There was also a Rothko exhibit but that didn’t hold my interest. I was blown away by the John Frame pieces. His sculptures (puppets, really) were disturbing and odd, dark and nightmarish, but also creative and sometimes cute. Words cannot fully describe just how inventive his pieces were. 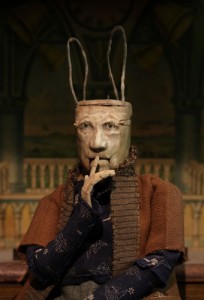 He would carve out these sculptures, sometimes tiny pieces with incredible detail, and make short films of them or take photos of the creations to tell the story. It was so cool. If this exhibit travels to your city, I urge you to take a look!

Saturday morning I went to the gym to workout. I’d hoped to go for a hike but the weather was “iffy” on Saturday so the gym it was. I had a really good 3 mile run (so ready to make the move to running outside) and an intense weight lifting session that had my muscles twitching. While I am satisfied with my progress and happy that I’ve increased my strength tremendously, I’m a bit disappointed that I haven’t been seeing any physical changes yet. Perhaps I have reached a plateau with strength training and need to change things up? 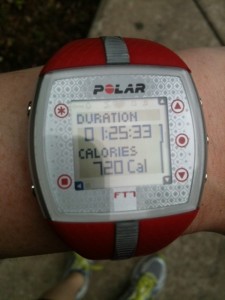 After the gym, Michael and I saw “Dark Shadows.” As a teen, I watched the whole Dark Shadows TV show. I’d rented the VHS tapes from the library. 🙂 I remember it being very soap-operaish. I loved it back then. How was the movie? It was surprisingly good. I thoroughly enjoyed the movie and it was much more serious than the previews made it out to be. It wasn’t as campy or silly as the previews were. In fact. we both felt like the humor about Barnabas being a “fish out of water” in a new era was very subtle. Still good and funny! 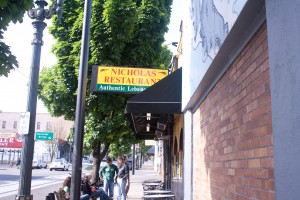 Saturday evening I met my friend Erika for dinner at Nicholas Restaurant. I’d had a Groupon deal for it and tried to use it several times but was discouraged both times by the long line waiting to be seated. There is almost always a line of at least 20 people waiting to eat at Nicholas. I don’t know about you, but that discourages me from going to a restaurant. Who wants to wait over an hour to be seated?

Luckily, Erika and I got there pretty early to avoid the crowds and the wait was about 5 minutes. The place was packed and noisy, but the service was fast. They brought the special bread out (similar to naan bread or like pita bread) with a dipping sauce while we waited for dinner. We only had about half of it before our dinners came out. 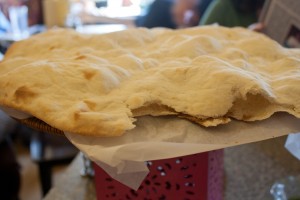 Erika and I both ordered the lamb gyros. They are my favorite at the local Lebanese restaurants I go to. My gyro came out with homemade pita chips and a tzatziki sauce. The gyro was fantastic and so filling. I don’t think I ate a ton of food but I was stuffed! 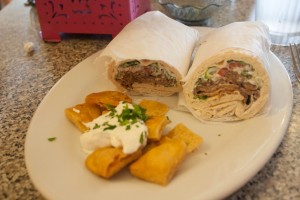 We finished up dinner and it was still early so we decided to walk up the street to the East End bar for a beer. Erika and I sat outside on the picnic table in the sunny evening catching up and drinking our beers (I had a Ninkasi Total Domination IPA). For about an hour I watched as a very black cloud slowly made it’s way in our direction. Half the sky was black and the other half was clear blue. 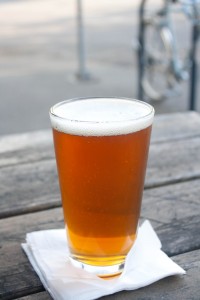 Suddenly I started seeing flashes of lightning in the distance. The air was still warm and I thought the storm was far away. I watched as it got closer. The lightning was more frequent, the thunder rolling in the distance. The sun had dimmed behind the clouds and those black clouds were now over us. A wind picked up and we both realized at the same time that the storm would be starting in seconds. 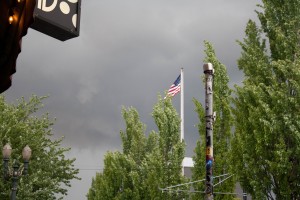 And it did. With booming thunder, flashing lighting, the sky opened up and it was a torrential downpour I haven’t seen in Portland since the dead of winter. It was shocking. 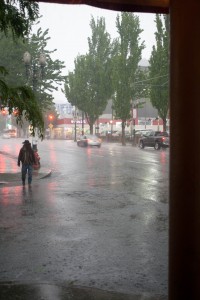 The metal band that had been unpacking their music equipment and bringing it into the biker bar to perform took refuge inside the doorway of the bar. 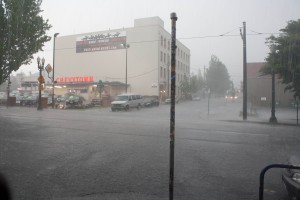 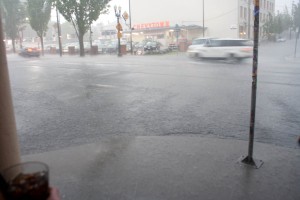 Erika and I joined the sea of black leather, army-booted, bullet-belted, long-haired metal dudes in the bar to wait out the storm. Someone commented on when the frogs would start raining down and Erika and I decided we’d order another beer to wait out the storm! It wasn’t quite the way I saw my weekend going, I would have preferred sunny skies and BBQ’s but I still had a great time.

QUESTION: How was the weather in your neck of the woods? Any grilling or camping?