I recently read a book that was equal parts informative, interesting, terrifying and disgusting. The book I’m talking about is Paul Roberts’ “The End of Food.” This book is not for the faint of heart and it will definitely make you rethink a lot of the things you see in the grocery store. The more I read, the less happy I am with our current state of food.

Have you read the latest controversy on the “pink-slime“? We simply do not know what is in our food. We just don’t. We go to the grocery store and think we’re being healthy and mindful by buying a bunch of fresh vegetables but in reality, those veggies could be GMOs and we might not even realize it. I mean, do they put a sticker on that zucchini that says “GMO”? I don’t know.

Sometimes it feels like we are trapped in a sci-fi horror movie. 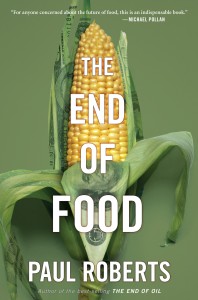 Here are just a few quotes and a few of my thoughts on the book. It’s really worth a read if you’re interested in knowing what you’re putting in your body. The book scared me, but it informed me too. I hope there is a better, healthier way to eat foods.

“Fat and muscle are more calorie dense than plants are and thus offer more energy per mouthful. Animal foods are also easier to digest, so their calories can be extracted faster. In all, meat provided more calories, and thus more energy, that could then be used for hunting, fighting, territorial defense, and certainly mating. Meat was also a more reliable food source; by shifting to meat, prehistoric man could migrate from Africa to Europe, where colder winters and lack of year-round edible vegetation would have made an herbivorous diet impossible. [pg 6]”

“Because animal and human tissues have the same sixteen amino acids (whereas most plant-based proteins contain just eight), animal converts readily into human: meat is the ideal building block for meat. That’s why bodybuilders eat a lot of meat; it also helps explain why, as our ancestors ate more animal foods, their bodies grew larger. [pg 6]”

Reading about the evolution of the human race was fascinating and I had a lot of “ah ha” moments. It made so much sense once I understood the connection of the brilliance of the body and the way our ancestors used to live. The body was designed for “scarcity”–for going long periods of time without food while the hunters and gatherers hunted the massive beasts. The body is built to hold onto fat and weight because back then, it literally depended on it.

That has changed so much with our current lifestyle. We aren’t starving–food isn’t scarce at all. Hungry? Go to 7-11 and grab a candy bar. Food temptations are everywhere around us–fast food commercials, convenience foods, everything…there is no scarcity anymore and our bodies haven’t caught up to that. They still hold on to that fat that we AREN’T burning off for fuel as we hunt the massive beasts!

“As more and more of us move away from producing our own food, we’ve become less and less certain about its safety, its quality or its taste. [pg 43]”

“Our scientifically bred produce grows so quickly that it contains measurably fewer micro-nutrients. Our processed foods are often packed with large quantities of salt, fat and sweeteners, not to mention hundreds of chemical additives, some of which, such as the preservative sodium benzoate and yellow food coloring, are definitively linked to medical problems, such as hyperactivity. [pg 83]”

The chapters about how food is manufactured and meat is processed would turn anyone against eating meat! I was a vegetarian for nearly 12 years and part of the reason was because of the animal cruelty issues surrounding it. Even though I eat meat now, I struggle with the moral part of it. It may not be an answer, but I try to just disconnect that “this used to be an animal.” It was hard to read about the chicken farms, but the information about the Avian Flu that began with some chicken farms were definitely enlightening.

“‘Today’s average home-maker isn’t cooking a meal for five people anymore, she’s cooking five different meals.’ And “meal” may be an overly generous term; according to one recent U.S. study, sandwiches are now the most commonly served dinner entrees, ahead of beef and chicken dishes. [pg 43] “

The chapter on the end of meals was incredibly sad to me. As a kid, my family ate every dinner together at the table–without any television watching. While as an angsty teen I hated it, I am grateful that my parents enforced that tradition. It’s a tradition I would like to continue with my kids. I think it’s important to unplug the electronics and enjoy each other’s company over a meal.

“Food companies are in fact anticipating the end of meals as we know them, as a growing number of consumers skip more and more sit-down meals altogether….the average American already misses breakfast every third day and is beginning to skip a large number of lunches and dinners….this trend is extraordinarily bad news for consumer health….because as consumers eat fewer regular meals, they’re compensating by eating more of another even more lucrative food category: snacks. [pg 44]”

But how many of us sit in front of the TV while we eat our dinners microwaved? That was me for a long time. It’s something I don’t want to teach my kids! Real food that does not come out of a box and good conversation over a table of healthy meals, that’s what I want. 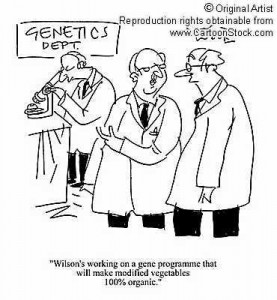 “…the compound diacetyl became ‘butter’ for many consumers of microwave popcorn–that is, before it was taken off the market in mid-2007 as a possible cause of lung disease. [pg 47]”

As a general rule, when I buy processed foods I try to look at the ingredients list and buy things with the fewest ingredients as possible. It’s a challenge, for sure, but I like to think I’m making a difference by buying something with ingredients I can pronounce.

“He showed how HFCS was used in everything from soda and ketchup to candy and bread. He offered research suggesting that HFCS inhibits the body’s ability to know when it is full. High-fructose corn syrup ‘is the crack of sweeteners, you get addicted and you want more.’ [pg 82]” 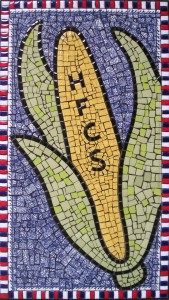 The chapter on sugar and HFCS was my favorite, obviously. I’ve struggled with sugar for years. It’s something that I wish I had more willpower to resist. It’s something I hate that I love. Have you ever looked at some of the labels in your pantry? You would be shocked at just how many items contain High Fructose Corn Syrup. It’s even in mouthwash! YUCK!

The book was fascinating, frightening and disheartening. What I didn’t like about the book was that it didn’t provide any alternatives, or ideas on how to STOP the end of food. There was no light at the end of the tunnel in this book.

QUESTION: Have you read this book? What were your thoughts? How do you feel about this topic?