I admit, I got sucked into the drama of Hurricane Sandy this week. My brother lives in Philly, and while I talked to him the morning it was supposed to hit Pennsylvania and he wasn’t too worried, it was still pretty nerve-wracking to see the progression of the storm and the horrifying photos of New York and New Jersey! I hope everyone on the East coast is okay and that the property damage isn’t too much. Mother Nature is absolutely amazing and it just goes to show you things can change on a dime.

It got me thinking: am I prepared for any kind of natural disaster? Not really. Michael and I have a bunch of canned food. And our BBQ outside is gas, so we could cook on that if the power ever went out. (We did have the power go out over Christmas a few years ago. We woke up Christmas morning to no power or heat! That was not pleasant.) We have a little bit of firewood from last winter to heat the fireplace, but not much. We do not have enough bottled water for the two of us and the cats. This is probably something I should be more diligent about. After all, Portland is due for a “mega earthquake” and the city is definitely not prepared! Hell, most of our bridges would end up in the Willamette River.

To keep busy, I tried to get caught up on season 4 of “White Collar”, tried not to check CNN and Weather.com every 10 minutes, and made dinner on Monday night. I wanted a recipe I could use the leftover ricotta in. It had been sitting in my fridge for a week after making my first attempt at lasagna. I haven’t cooked with ricotta very much so I went to google. What do I do with ricotta?? I found this recipe and it sounded pretty good to me. Easy peasy.

I added a few things to the mixture because it was a tad on the bland side. I added a no-salt seasoning we got from Costco recently. I also added a pinch of dill, onion powder, and extra garlic. I think I got the ratio right according to my taste test as I mixed it all together. 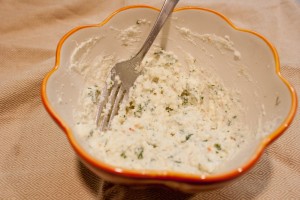 Originally, I was going to make salmon with some tiny tortellinis for dinner. But considering that ricotta is cheese, and the tortellinis were stuffed with three different kinds of cheese, I thought that might be overkill. Although, I debated for a very long time on giving up on the pasta. It sounded so good to me! And cheese is awesome, so why not use more cheese? 🙂 Yeah, I guess not.

Plan B: the salmon on top of a green salad. I chopped up red peppers, yellow peppers, carrots, celery, broccoli and added some sunflower seeds to the salad. 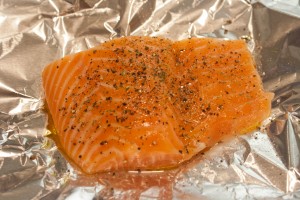 I wrapped the salmon in little foil “pockets.” It’s the usual way I bake salmon. It’s so easy, there’s nothing to really clean up because you just throw away the foil, and it cooks the salmon evenly. I wrap the foil loosely. 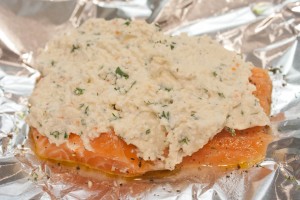 The entire dinner was less than 500 calories and filled me up for most of the evening. Salmon is always really satisfying to me. I bet this recipe would work great with the tortellini….next time! If you wanted to get fancy and pair a nice wine with a dish like this, you’d probably want a crisp Sauvignon Blanc or Pinot Grigio (which I happen to be out of at the moment). I think the tartness would have balanced out the richness of the salmon and the ricotta.

Michael’s opinion of the dinner: it was okay. He said he liked some of the other salmon dinners I’ve made better than this one (like the Wild Salmon with Dill and Cucumber Salad). 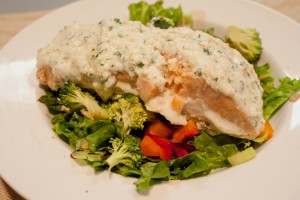 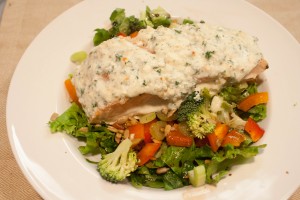 I liked the flavors a lot. The additions I made to the ricotta mixture made it more flavorful. I probably could have added a bit more lemon juice, and maybe some salt? It was a bit weird putting it on the salad…even though I liked the flavors mixing with the veggies. I’d probably make it with a side salad (or tortellini!!!) next time.

After dinner, I headed to bed–away from the news, the endless twitter updates and anxious feelings about mother nature, and settled in with a good book. I discovered a new author (new to me, anyway) and wanted to pass on the tip. Check out “The Sixes” for a good read!

Follow-up:  I went back to physical therapy this week and he showed me a few different option for taping my knees. Then he had me walk and jog on the treadmill to test them out. I jogged for about half a mile with no pain! Yay! It was encouraging. 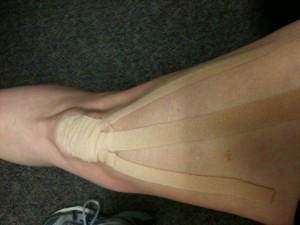 He taped both knees differently to see if I felt a difference. One knee looks like the photo above, the other knee was taped to directly address the internal rotation I have in that kneecap. I’m going to try these two methods for 3 weeks and when I return to see him in November, he is going to show me another method to try. I hope one of these methods turns out to be the magic cure.

QUESTION: Did Sandy pay a visit to your town?

Leave a Reply to Diane, fit to the finish Cancel reply