I love that we’ve been having some decent weather lately. It feels almost like summer. This past weekend it was in the 80’s on Saturday and mid 70’s Sunday. After spending a crazy busy weekend getting things done and working in the dirt, my garden was finished and Michael and I wanted to have our friends over for dinner. Good weather NEEDS a BBQ in my opinion.

We invited our friends over whom we went to Hawaii with last year. They brought their 5 year old and new(ish) baby who has learned how to smile. 🙂 So cute.

I used La Choy soy sauce because it’s gluten free. It’s actually pretty good. I’ve read some reviews that people don’t like it, but Michael is a fan. He says it has a coffee flavor. I’m indifferent.  I don’t notice enough of a difference from the regular soy sauce we used to use. I left out the salt because I think soy sauce has enough sodium in it. I never add salt to recipes that call for soy sauce.

I also didn’t have any parsley so I skipped that. The recipe called for 1 1/2 cups of vegetable oil but that seemed like a LOT to me. I used 1 cup and that was plenty for 6 chicken breasts to marinade in. I whisked it all together and we grilled the chicken up. 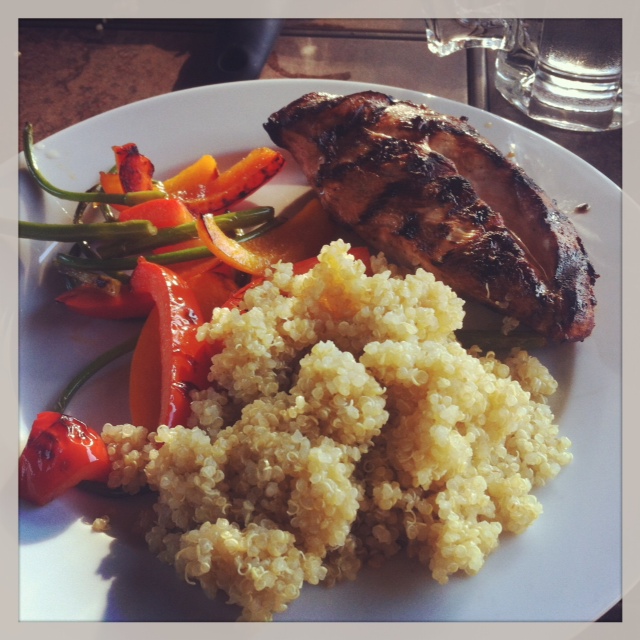 I cooked up some quinoa (gluten free) and Michael grilled some fresh veggies. I cut up a red and yellow pepper and our friends brought scapes. I’ve never heard of scapes before. Have you?

“Essentially, they are the plant that grows out of the garlic you normally buy (garlic being a bulb and all). Have you ever left garlic out for a few weeks and had a green stalk shoot up? Well that, I believe, is a garlic scape.” (source)

If you’ve never heard of it, you aren’t alone. Neither of us have heard of it or seen it in a store. I bet you can find it at a farmer’s market or a co-op. Raw they look like this: 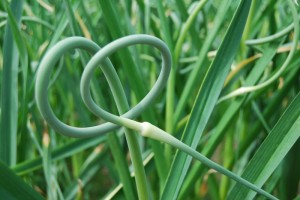 Susanna got it from her garden. I took a bite of it raw and it was like a cross between raw garlic (spicy) and green onions. When cooked, it tastes more like cooked garlic or a cooked yellow onion. It was quite nice! I cut them into smaller bite sizes and sauteed them on the grill with the peppers. 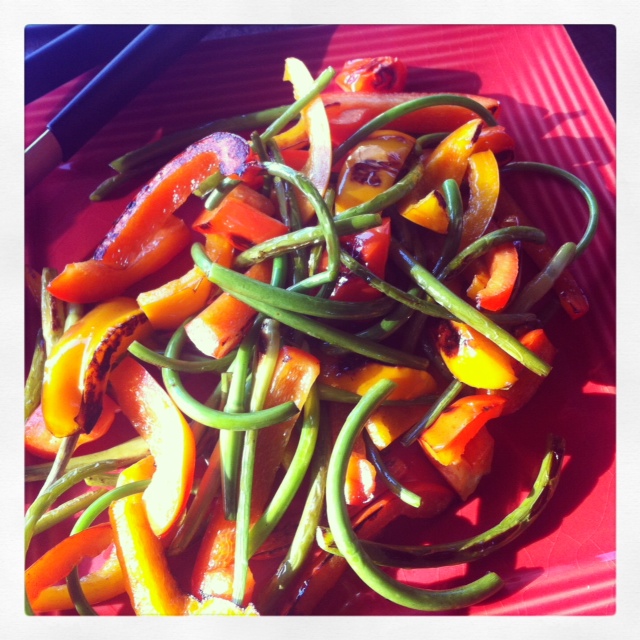 Everything went together nicely and it was a good dinner for lounging outside. We had dessert–which I didn’t take a picture of and wish I had — which was awesome!! I see myself going to the farmer’s market soon to get the things I need to recreate this meal.

Dessert was vanilla bean ice cream topped with rhubarb. Susanna diced the rhubarb up into small bite sizes, put in a skillet with some water, and cook it until the rhubarb is soft. It took her about 5 minutes or so for it to soften. We topped the ice cream with the rhubarb for a fantastic dessert. The tart fruit went perfectly with the sweet ice cream. Loved the combo! I haven’t had rhubarb since I was a kid and it was in a pie my aunt made.

After dessert we all went for a walk down the street to the nearby school. The sun was starting to lower in the sky and the temperatures were dropping but it was still a nice after dinner walk. We took the 5 year old down to the football field to run around and get some energy out. 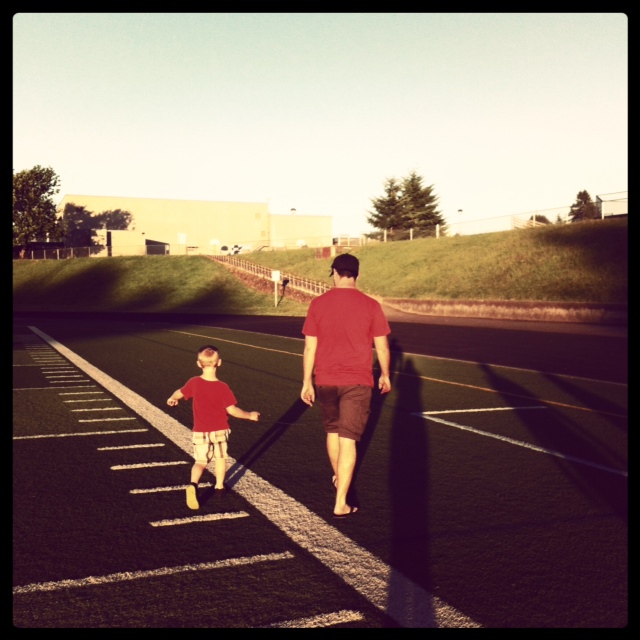 Michael is BFFs with the 5 year old. 🙂 We hung out and he wanted to race (of course he did) so I took my flip flops off and we ran up and down the football field on the soft astroturf. It was really soft and it felt nice to run barefoot for the time ever (and the first  “run” since December!). Then we did some cartwheels. Man, I haven’t done those since I was a kid. I have no idea if my form was good or not. 🙂

It was a nice little evening and I’m super excited that I tried two new foods. I can’t wait to find them in the farmer’s market!

QUESTION: Have you ever tried scapes? What’s your favorite way to use rhubarb?