Saturday night I went to the Gypsy Lounge in NW Portland with Michael and Jeremy to watch the UFC show. I’m a fan of Anderson Silva and he was fighting.

I ordered a diet coke and skipped the beer. I just didn’t think my stomach could handle it. We ordered a bunch of appetizers for dinner and splitting them between the three of us meant there wasn’t a chance of over-eating. Now I love greasy bar food as much as the next person, but this place had nasty food!

First, Michael and I got some sushi: a Spicy Tuna Roll and a Philly. 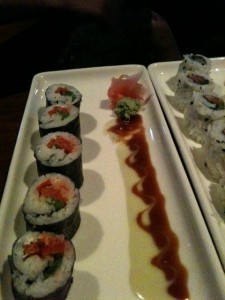 I didn’t try any of the Spicy Tuna Roll. I thought the seaweed would be too chewy for me to eat still. Michael said it was pretty good. I stuck with the Philly Roll. 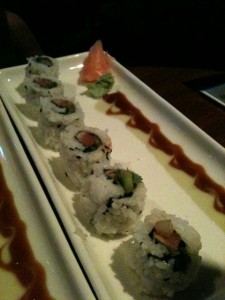 It was probably the worst Philly Roll I’ve ever tried. There was cilantro in it! Like a lot of it, too. I was so disgusted I only ate like 3 pieces and just gave up. Why would you ruin a good Philly Roll with cilantro? All I tasted was the cilantro and it was nasty. 🙁 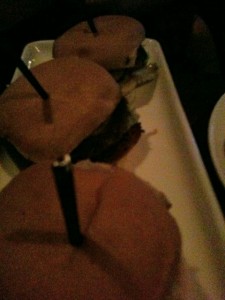 The mozzarella sticks (the picture was too dark) were flavorless. The spicy chicken and bean quesadilla was pretty good. I was disappointed with the food. I had high hopes that we’d have some yummy, greasy bar food. Not so much. I guess it turned out to be a good thing because I ate 1 slider, 2 mozzarella sticks, 3 sushi rolls, and 1 quesadilla slice. I do not feel bad about my calories for the evening!

This morning Michael got up early and drove Jeremy to the airport. He’s flying home to Ireland until he returns again in October. I slept in and then went to the pool. It helped me get back into the groove of things. And sitting in the hot tub felt good after yesterday’s long run!

This is why you’re fat!

I happen to love that website. It’s pretty funny (and equal parts disgusting) to see some of the food showcased on the site. Well Michael and I went to Chevy’s for an improper lunch date on Sunday. I thought I was being healthy ordering a salad. I got the Tostada salad with carnitas and the salsa vinaigrette dressing. When the plate came to the table I almost fell over in shock! 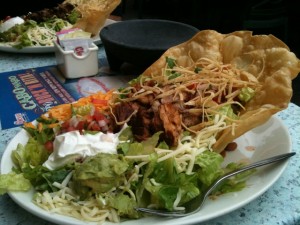 Yes the salad is bigger than the plate! Oh my god! I just kept thinking “This is why you’re fat”! It’s just like the website! 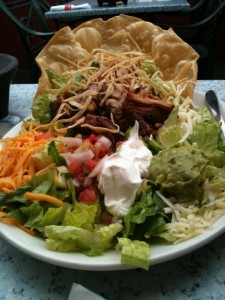 I have to admit, it was pretty darn good. The Carnitas was pulled pork with a sweet sauce and the meat was deliciously prepared. It melted in my mouth (which was good because I still can’t eat really chewy foods). I ate half of the Carnitas, the salad, some of the beans and I will admit: I ate all of the sour cream and guacamole. Those are two things I cannot resist! I skipped the shell and saved the rest of it. Here’s the “After” shot: 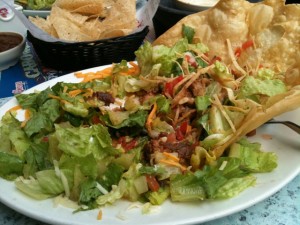 Salad usually doesn’t keep very well. If it’s still okay tomorrow I’ll eat the rest of it for lunch. I left the taco shell at the restaurant–definitely don’t need that! I am still shaking my head at how humongous that salad was.

QUESTION: What is a bar food that you have a hard time resisting? Have you ever tried to make it yourself but make it healthier?