First, I am so glad I was able to work out for basically the entirety of my pregnancy. I’m pretty sure keeping that up helped me with the labor process and it most definitely helped with the recovery process.

Second, I wasn’t quite prepared for just how hard the postpartum stuff would be. Those first few days were really hard physically and emotionally. I blame most of it on lack of sleep. Every one said to sleep when the baby slept. Which I tried to do but still, was really only getting sleep in hour increments the first few days we were home.

Something I wasn’t expecting was how hard regulating my body temperature would be. I just cannot get it right! I’d be freezing, then have hot flashes, then be cold again. Apparently this is something that’s normal. The hormones and drop in estrogen can effect it and I definitely was feeling it. I’m hoping it isn’t something that sticks around for a long time. 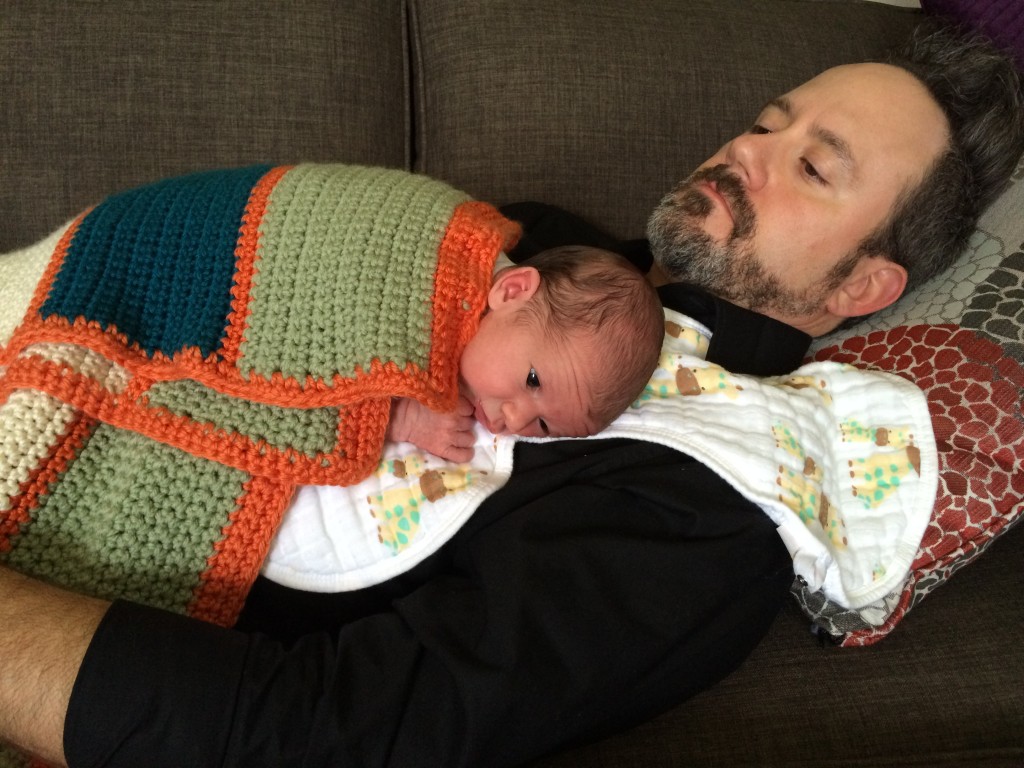 Nursing wasn’t going well because of the tongue-tie/latch issues and that was so hard emotionally and physically for me. I wanted nothing more than breast feeding to go well and when it wasn’t I felt awful. I felt like I was somehow failing and I was definitely being too hard on myself. My mom tried to help and she said it was okay, that this stuff sometimes happens and she had a similar issue with me. That didn’t necessarily make me feel better about it but it helped me realize that the priority was feeding Logan. It just took a few days for me to come to terms with that.

The lactation consultant we saw gave some advice and said we needed to supplement with formula for a little while because Logan had lost too much weight since his birth (11%, and anything over 10% was worrisome). My heart was broken for so many reasons. But once again, I reminded myself the priority was getting him enough food. We started supplementing, the consultant got me a super-duper hospital grade breast pump and I started pumping. Once that all happened things got a lot easier! Logan was eating and we were getting a routine and a schedule down. Within one day of doing this he’d already gained 5 ounces and was out of the “danger zone.” 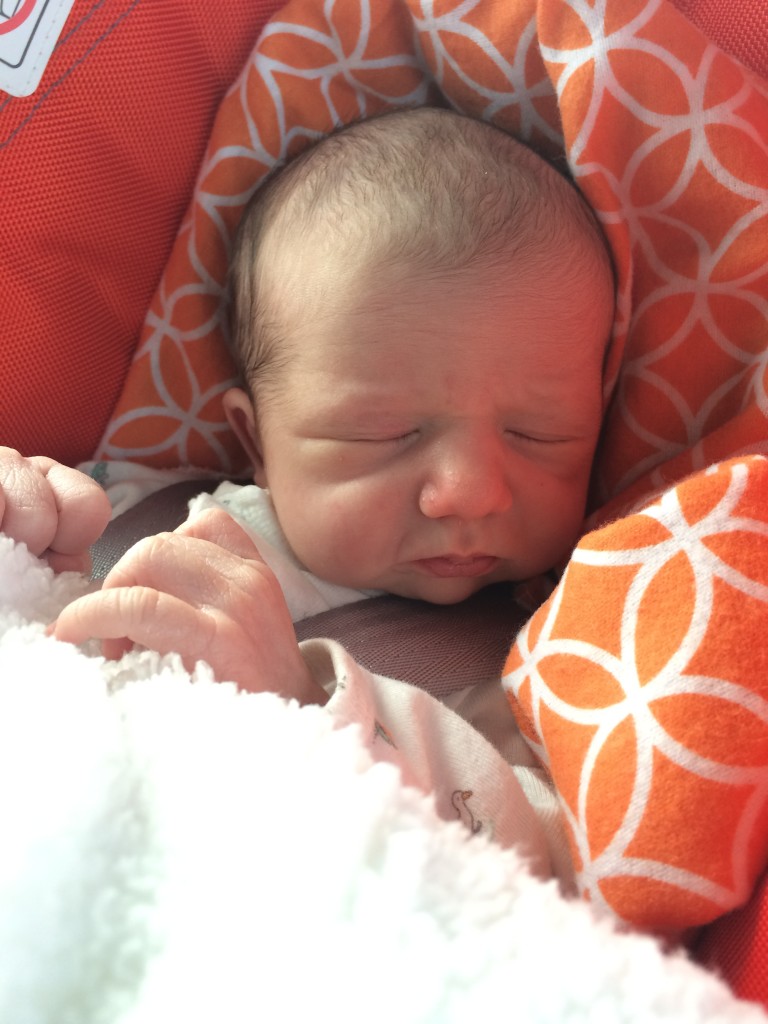 Once we figured this stuff out, it was much easier!

As for me, once we got this routine down and I was pumping a lot and getting more and more supply, and more sleep, I felt much better. I was recovering quickly and could move around easier. We tried to go for daily walks, weather permitting, and getting outside helped. Each time we went for a walk I could tell I was healing more. 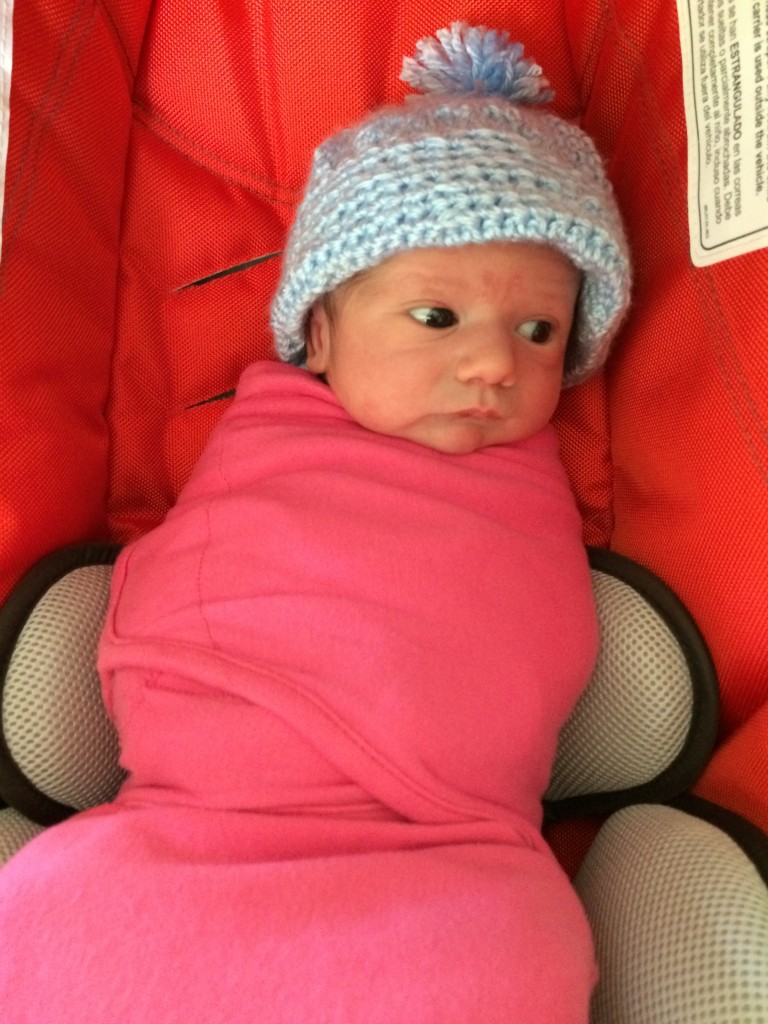 It is kind of weird to not have a workout schedule. Definitely a mind-shift. Right now I am focusing on healing and taking care of Logan.

My postpartum body was a little foreign to me. It was weird to no longer be pregnant. It was weird to think that this cute little creature was actually inside me. Then there was the weird realization that my body was in this in-between stage. No longer pregnant, but not back to my “old” self either. It kind of felt like my stomach had just deflated like a balloon!

I did get on the scale a week after he was born. Mostly I was just curious. I’d heard that you can lose something crazy like 20 pounds once you give birth and I was curious to see what it would say.

For the last two or so months of the pregnancy I stopped looking at the scale when I went to the doctor. I just didn’t want to know what my weight was and honestly, it helped me a lot mentally. It wasn’t the priority and I didn’t need the pressure or the “feelings” surrounding weight gain so I just lived in denial for a few months. It was the best decision for me. I still counted my calories, worked out, ate when I was hungry and did my best. It worked. 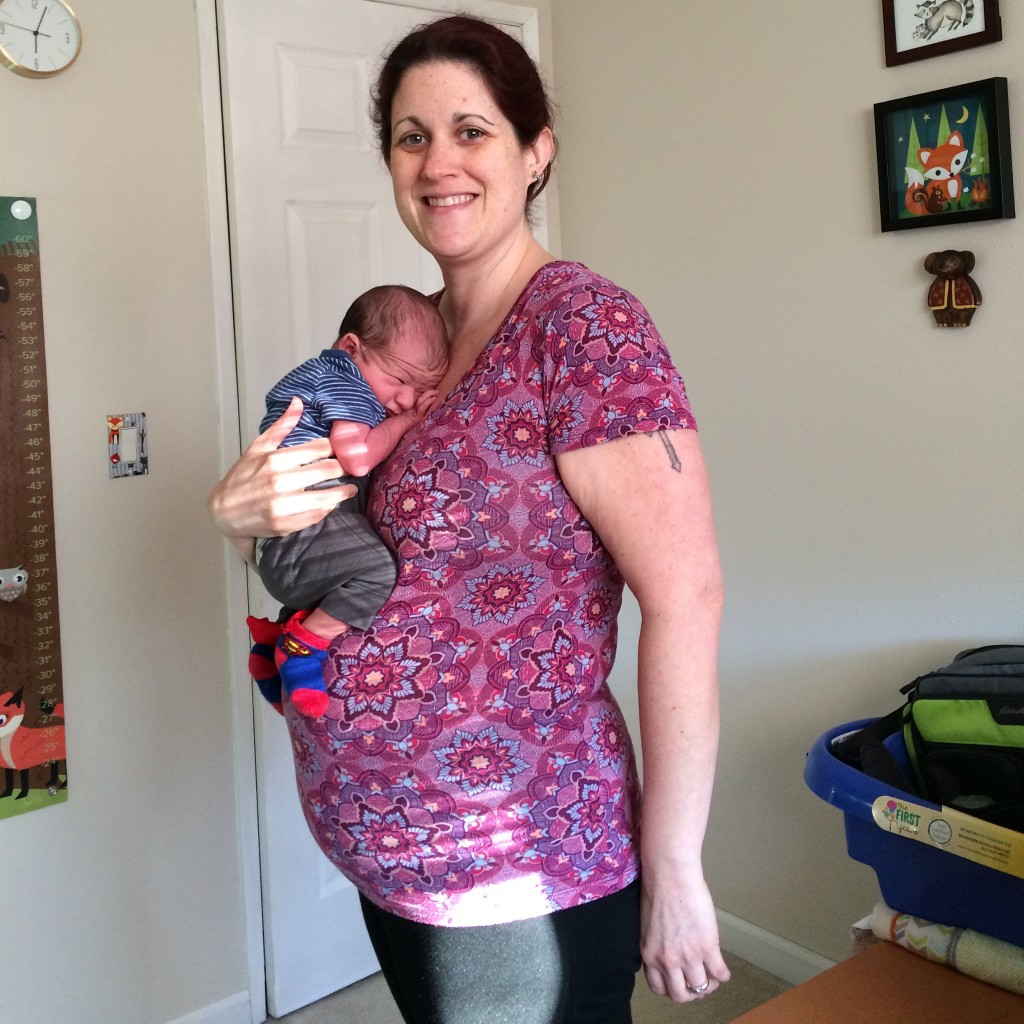 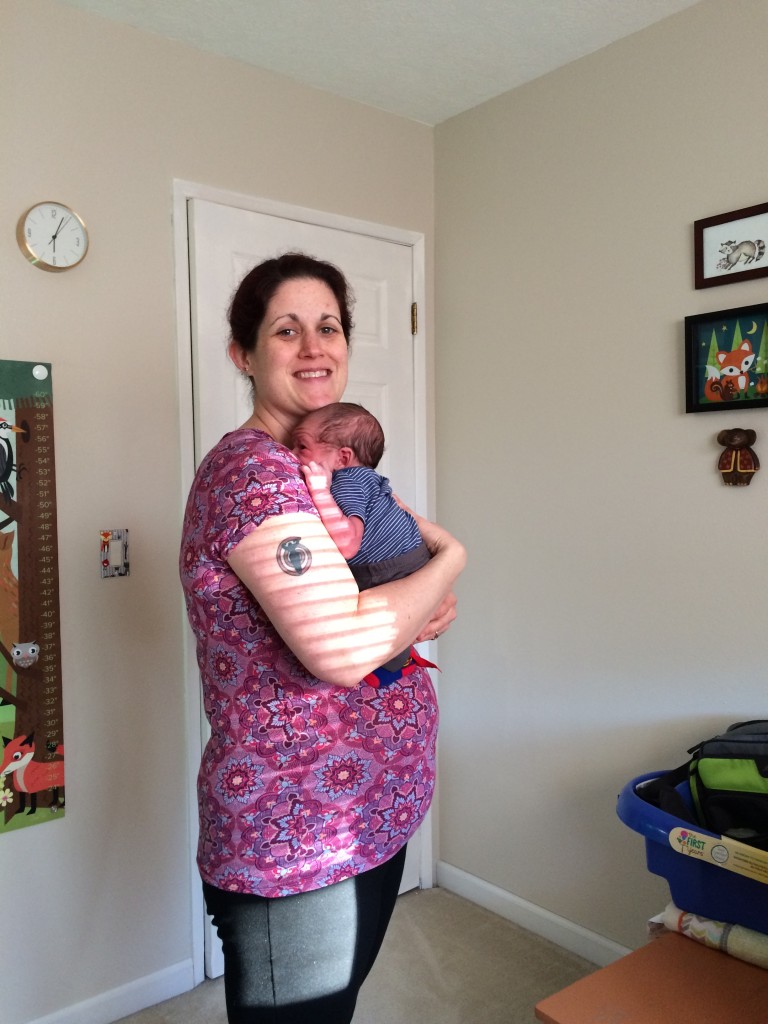 When I checked in at the hospital I weighed 190 pounds. Icky number for me mentally. When I got pregnant I was 157 pounds. 7 pounds over my goal weight. So I had gained 33 pounds during the pregnancy. I was a-okay with that amount honestly! I was worried I was in the 40+ pounds territory so I was actually pretty happy to see that it had stayed in the 30’s–which was what my doctor had recommended for weight gain.

I’m not counting my calories right now, just eating regular meals and good food. I will start counting in a few weeks. Right now I am just trying to get a handle on being a mom, pumping, feeding Logan and getting rest. I will say this, though, I have had hunger like I’ve NEVER experienced. Definitely not while pregnant! It’s crazy how hungry I’ve been breastfeeding!

Like I said, the first few days were rough. Sleep deprivation did a number on my hormones and I felt like a complete mess! I do not believe I am suffering from PPD, I don’t feel depressed or have any of the symptoms. It definitely feels like hormonal fluctuations. There have been tears, that came out of nowhere. But overall it’s manageable. As long as I get enough sleep. I’ve noticed that if I skip taking a nap or two during the day I feel the emotional stuff way more than when I routinely nap a few times. Knowing the triggers was huge and I tried to get more sleep to avoid this.

Logan and I went on our first solo outing this week and I saw my therapist. He did so great! I was a little nervous venturing outside–and driving!–without Michael but it was good, everything went smoothly (and he did so well I was even able to stop at Target on the way home for a few things, which definitely gave my confidence a boost). My therapist does not think I’m suffering from Baby Blues or PPD either. She said what I described was an obvious case of sleep deprivation and crying is my body’s way of saying “you need sleep!” That was reassuring to hear. 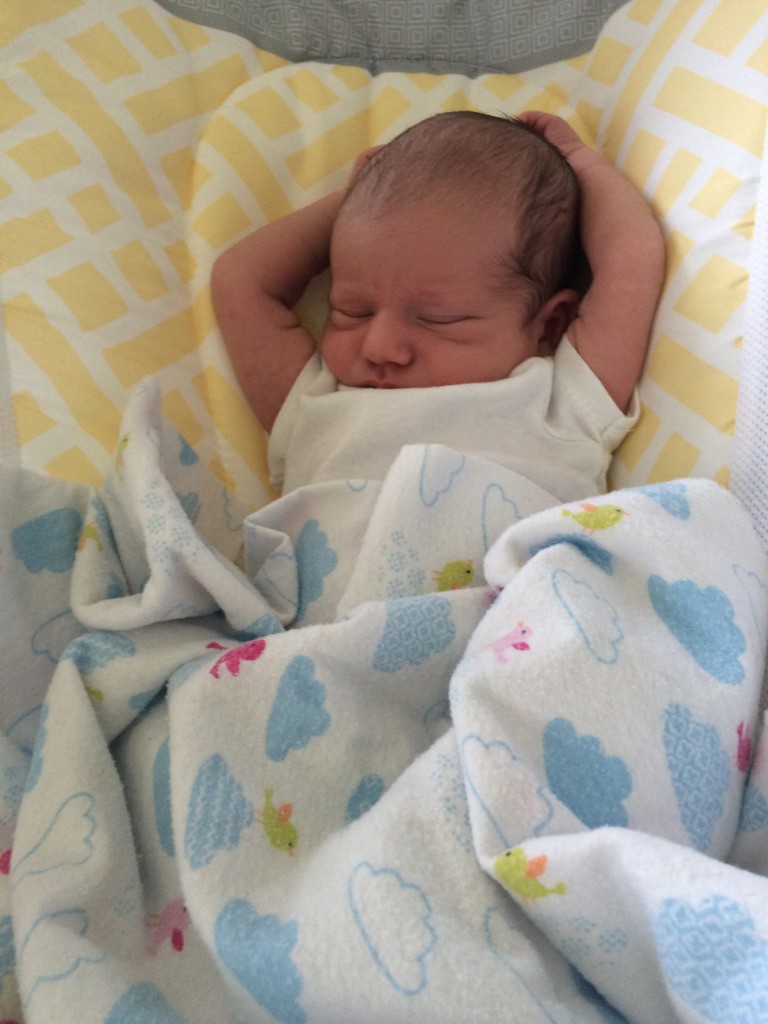 Despite the bumps in the road and the obvious learning curve, things are going much better and I’m feeling pretty good. I’m so deliriously happy about this baby. Even when he’s having a fussy moment it’s hard not to stare down at him and just think he’s too adorable for words. 🙂