He’s gotten so big! In some ways he’s still teeny tiny but he’s starting to fill out a little bit and get a little baby chunk. He’s about 12 pounds now. 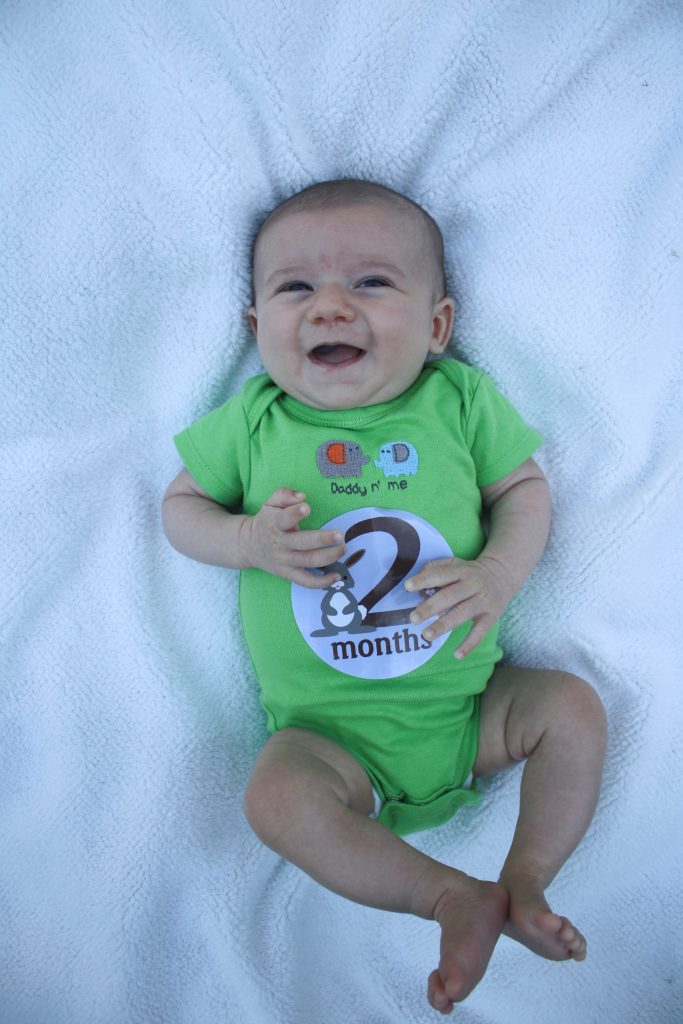 He’s grown out of so many outfits! Most of his 3 month old onesies don’t fit. He’s now in the 3-6 month sized onesies. I think the biggest growth is length. I’m not sure how long he is right now but he’s too long for many of his outfits! And he grew out of his swaddle sack overnight (literally). 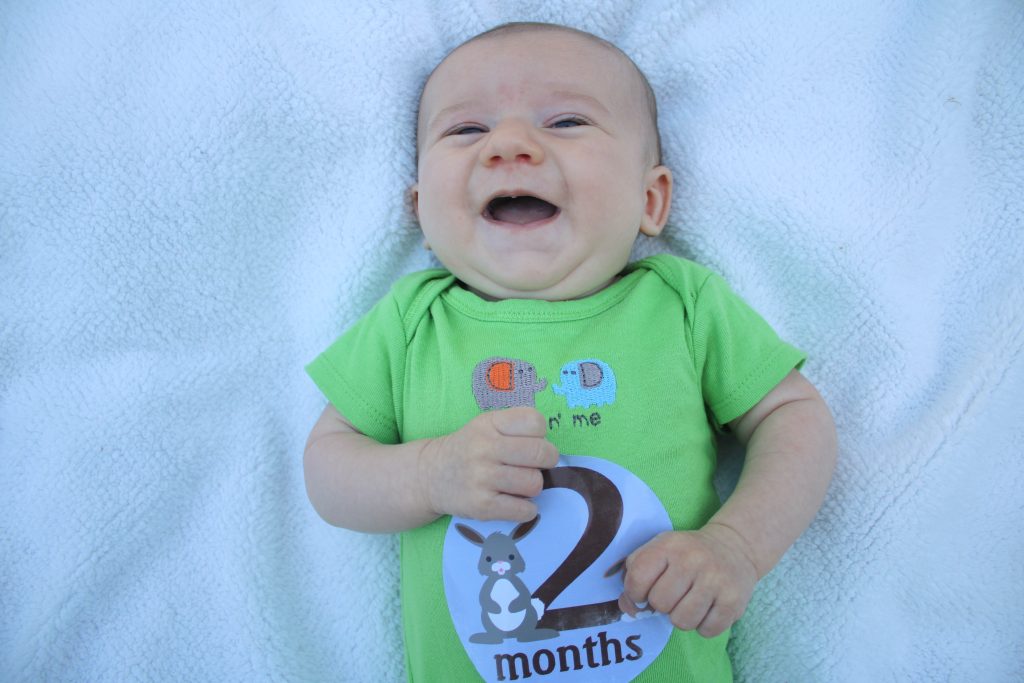 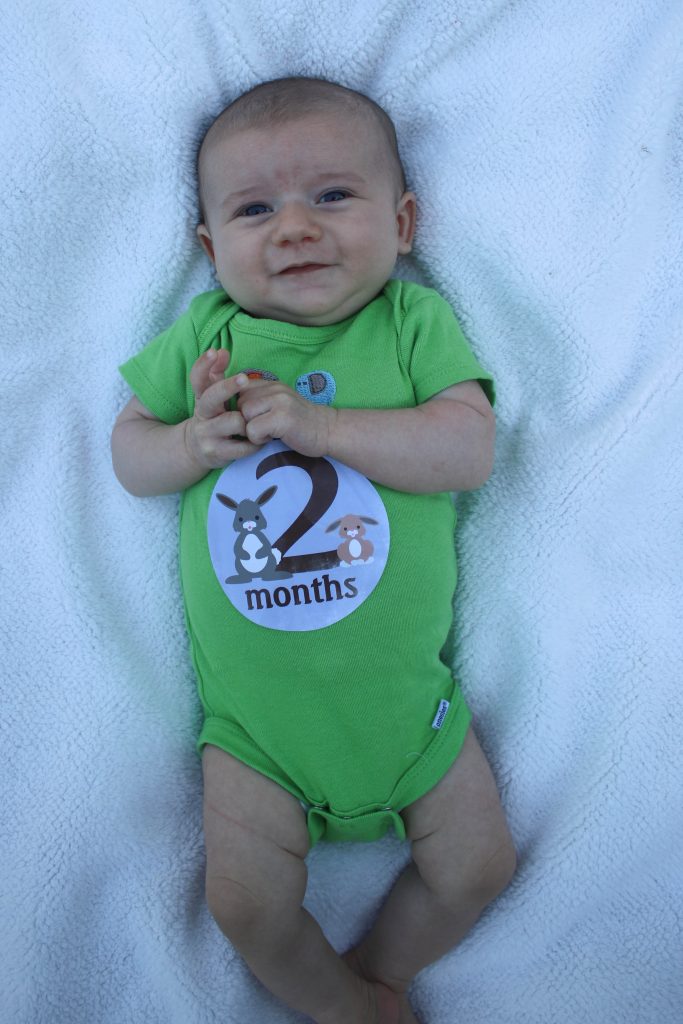 Logan is more active and more awake these days. He recently discovered his hands and his new thing is shoving his fist into his mouth. It’s pretty cool to watch him discover things and I get to see the world through his eyes as he explores. 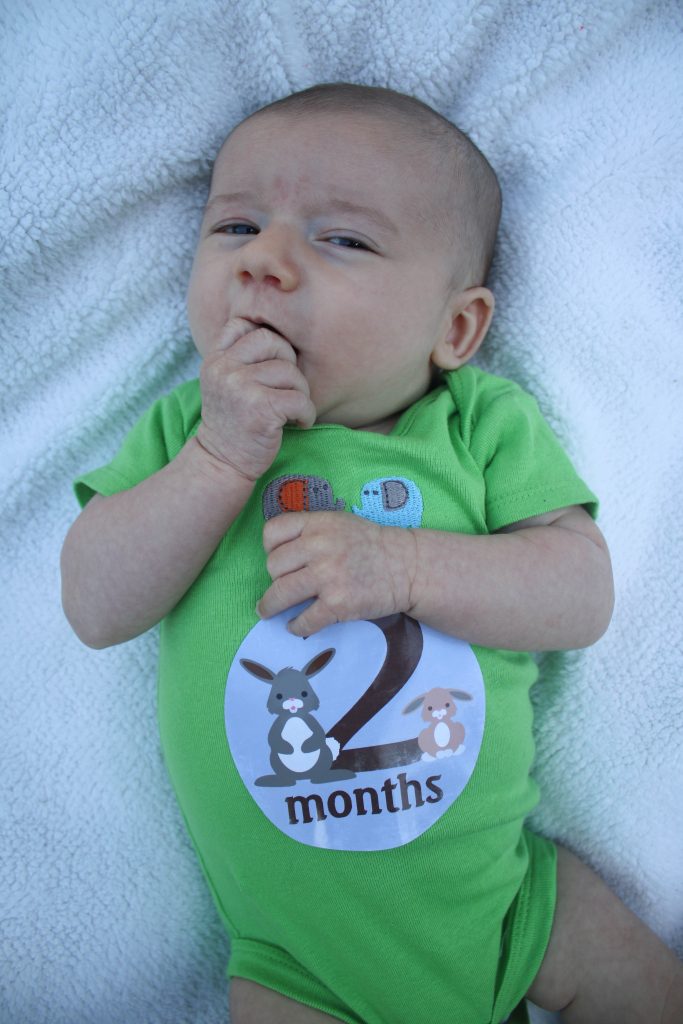 He likes to talk and babble and coo. He also recently discovered his OTHER voice…the crying voice! Instead of those “I’m sort of unhappy but not really complaining about it yet” cries he’s had this whole time he’s now “I am MAD! Fix it mom!” Thankfully this doesn’t happen too often but if he’s in a particular mood and hungry or needs a diaper change and I’m taking a teeny bit too long he lets me know! The good thing is that he gets over it pretty quickly and gets back to his happy baby self! 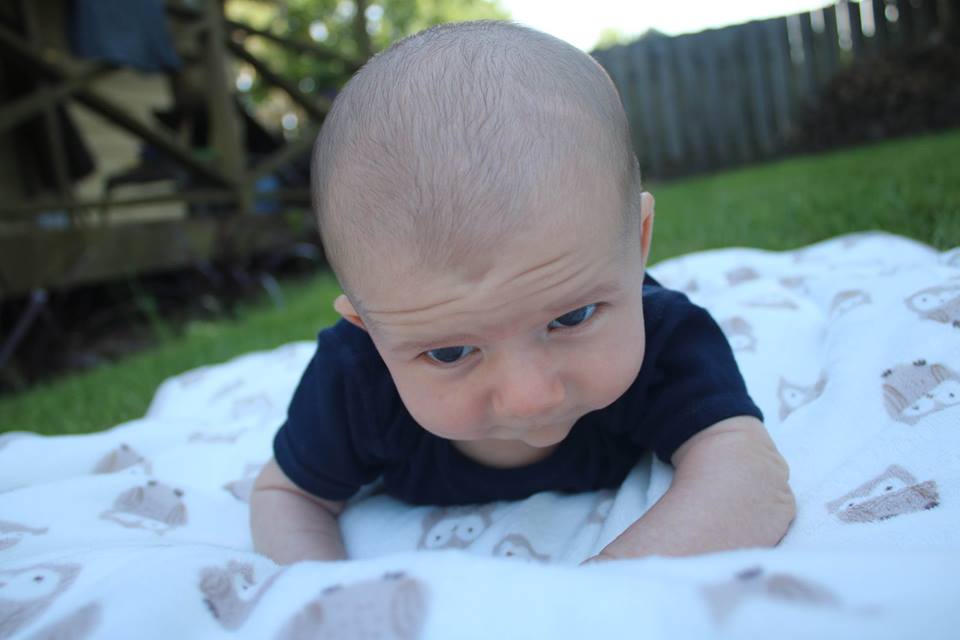 He’s trying to figure out how to roll. He’s rolled onto his side a few times in his crib when he’s playing but I don’t think it was on purpose and he hasn’t quite figured out what he’s doing. There’s a lot of flailing and kicking. 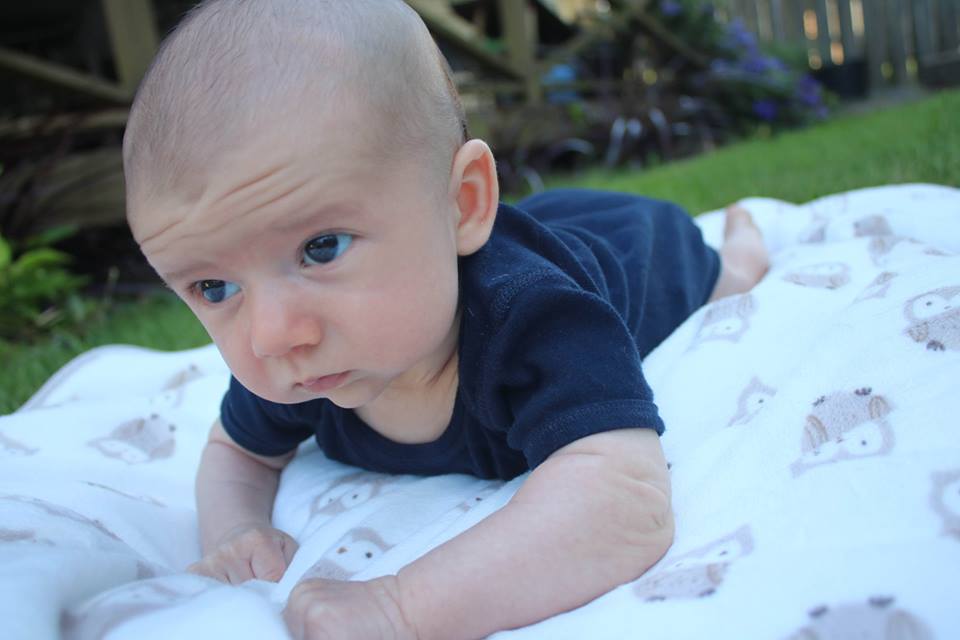 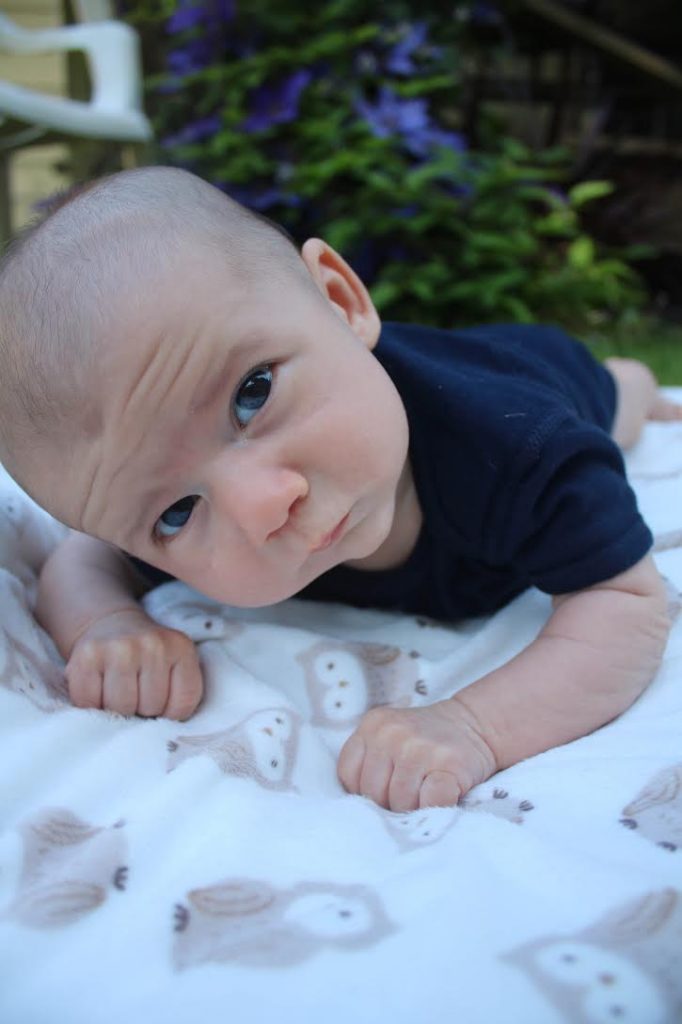 He’s such a happy baby. He has days here and there where he is extra needy and just wants to be cuddled and held. I’m ok with that. I feel like these times will be short lived and soon he won’t want to be held and I’ll miss it.

It’s a clique to say “he’s growing so fast!” but he really is. Part of me is excited for the next thing he’s going to learn– sitting up, rolling, crawling, etc–and excited for that to happen. But part of me is already sad that he’s going to grow up and not be a teeny baby anymore! So for now I just marvel at the changes he makes almost every day and give him lots of hugs and kisses because at some point he won’t want hugs and kisses from his mama. 😉

Last week I went back to the pool for the first time in 8 weeks! I was a little nervous about going swimming after such a long break but it was great. It didn’t feel like I had taken two months off and I was able to get right back into it. I swam a little over a mile in 45 minutes (which was about what I was doing when I was pregnant) without having to take a break. I could have gone longer but I stopped, not because I was tired, but because I was getting REALLY hungry! 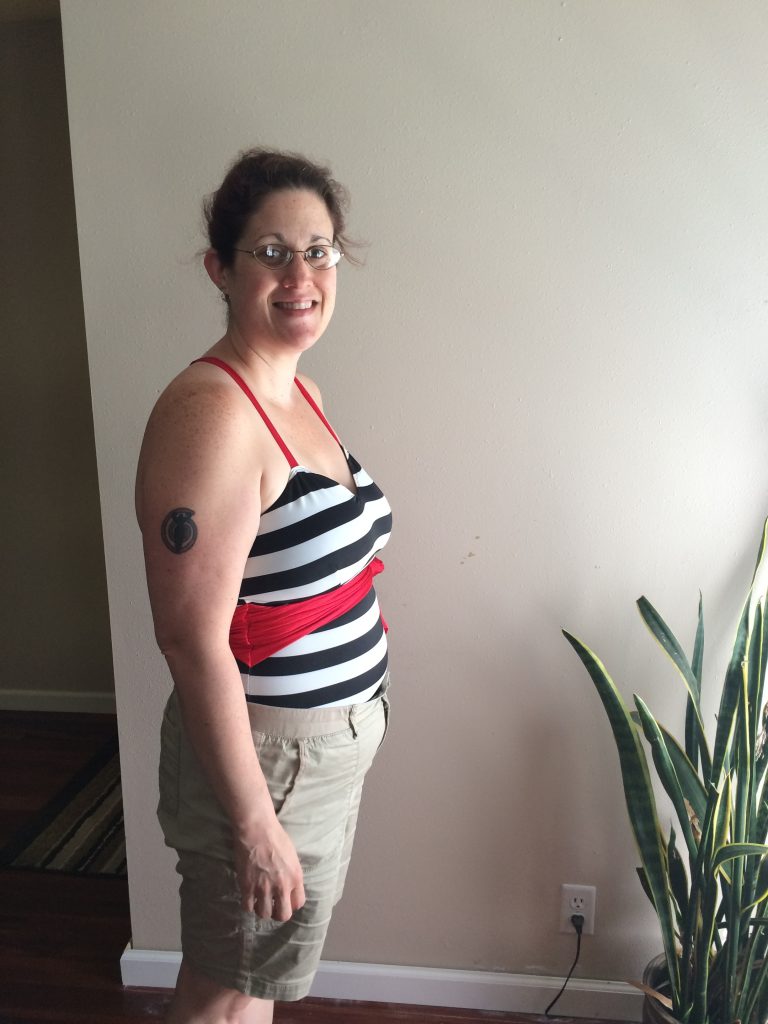 Also, it felt amazing to be able to relax in the hot tub and sauna again!  Boy oh boy was I starving after my swim, though.

Physically I’m doing pretty good 2 months postpartum. Still mildly sleep deprived but I don’t imagine that will improve any time soon. I go back to work soon and I’m slightly worried about how the sleep deprivation will effect that…but what am I going to do about that? I think this is going to be our norm for awhile.

Weight wise I’m the same. I gained 33 pounds pregnant and lost 18 that first week or so being home. Most of that was just giving birth but some of it was losing fluids I think. I haven’t lost any weight since then. I’d be lying if I said I wasn’t slightly disappointed that the weight isn’t “melting off” like so many people say it does when you’re breastfeeding. But I’ve also read that a lot of women don’t have that experience and their body holds onto the weight while they are breastfeeding and it isn’t until they start to wean that the weight loss happens.

Sure, I wish I was one of those lucky people that have the weight melt off. But, I’m ok with just maintaining where I am at right now. My priority is breastfeeding and making sure Logan gets enough. I don’t want to see my milk supply get effected and I am routinely pretty hungry as a result of breastfeeding so I eat. I’m counting my calories, staying within a reasonable number, and I’m back to working out on a regular basis (about 4 days a week) and I’m not willing to drop my calories to a restrictive number just to see if I can lose some weight. It’s been 2 months, I have plenty of time for that later.

Other than that, things are going really well. I feel good. We’ve got a decent routine going– which will change here soon when I go back to work. But things are good and I’m really happy. Logan brings so much joy into our lives. Sometimes we just look at each other and marvel at how lucky we are to have a sweet, happy, good-natured little cutie as our baby. I suppose this means he’ll be a hellion when he’s a teenager, huh?? 😉