There have been a few times in my journey to healthy living where I recognized that I was having disordered thinking. The first time was when I was 250 pounds and I had given up on the idea of ever losing weight. I had resigned myself to always being obese, but part of me always thought “I’d be happy if I was skinny.” Of course, losing weight in itself didn’t make me “happy” but getting healthy certainly did.

Another time I recognized this disordered thinking pattern was when I was about 30 pounds away from reaching my goal weight. I had all this extra energy that I’d never had before and I hated to just sit still. If I had free time, I’d go work out. I was also sooo stuck. The scale was not budging. I hit a plateau that stuck around for so long it made me crazy. My solution? To work out every day. For 28 days straight, I worked out in some fashion–gym, swimming, running, walking. This was most definitely disordered thinking! Rest days are important for the body and the mind and I was clearly overtraining. This experience was the birth of my “two rest days a week no matter what” edict.

Fast forward to reaching my goal weight. I was happy, I felt accomplished and satisfied that I’d reached the goal of losing 100 pounds–and kept going! 110 pounds! I was so proud. Then I made the classic mistake: I stopped doing what worked to the lose the weight and thought I could maintain without counting my calories. Add a medication that causes weight gain to the mix and the scale steadily crept up. This time the disordered thinking was denial. I blamed the 15+ pounds on muscles, on training for Hood to Coast, on everything BUT my own behaviors.

Last year about this time I was getting a little obsessed with the scale. Too focused on what that number was. Thinking too much about those stupid ounces or pounds. Weighing too much. STOP. This is disordered. Walk away from the scale. Thus began my Scale-Free Summer which released me from the unhealthy patterns. It broke the habit of the scale, it made me more comfortable in my body and released me from the chains of unhealthy thinking. 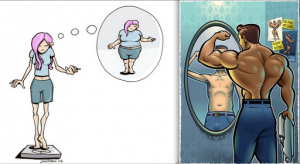 I do not have this disordered thinking pattern 100% beat. If I had to guess I’d say it’s about 80%. Most of the time I am comfortable in my own skin, I am happy and content with my body as I maintain my weight loss, I am proud of losing 110 pounds. But every once in awhile, that disordered thinking starts to creep back into my brain…that little voice that says “I feel so fat.” (Note: Fat is NOT a feeling. I need to remind myself of this!) 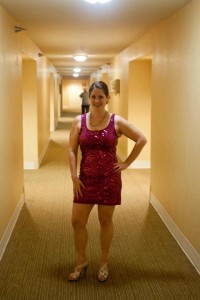 Lately I’ve been looking at some photos of myself and thinking, “I don’t like how I look in that picture” or “I wish I didn’t have a muffin top.” I weigh the same as I’ve weighed for a long time now. So why is my brain playing tricks on me? Maybe it’s a control thing…there are things in my life that have happened recently that I cannot control and it sucks feeling like you can’t make decisions or go for your goals because you are waiting…waiting…limbo…But controlling food and exercise is not the area to remedy that.

Maybe I will never be 100% over it. But the most important thing to take away from this lesson is this:

I recognize when my thinking is disordered

Walk away from the scale, stop obsessing, think of something else, change the behavior when you recognize it happening. I need to celebrate my victories, recognize my non-scale victories, remind myself of what I have accomplished and the amazing things my fit body can do! It’s hard, it takes work and positive thinking, but it can work.

QUESTION: Can you recognize when you are slipping into disordered thinking and change it?

When I was running all the time I became an obsessed weather girl. I had several iPhone Apps to track the weather, I obsessively checked weather.com leading up to the moment I was about to change to run at lunch time. One time I changed my normal lunch hour to 10:30 in the morning to avoid thunder and lightning! I carefully planned my entire day around when the best time to run during a heat wave was. The rain in Oregon is hard to avoid and on days when it was a downpour and I didn’t want to run in that, I was grumpy and irritated the rest of the day. How dare it rain when I want to run! I was training for Hood to Coast and I’d become completely consumed with training. Running. Preparing for the Big Day. Practicing. Tracking my mileage in Excel Spreadsheets. Comparing my PR’s with each run I did and getting upset if I was 30 seconds off from my last run. I also got obsessed with the weather. 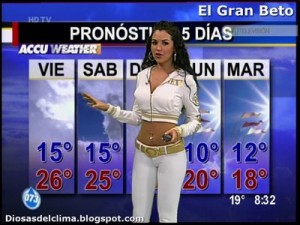 I became a total weather girl, scoping out the sky, analyzing the clouds–do those look like rain clouds? Thursday night on my way home from work I was once again analyzing the sky for signs. Could I get in a run before the rain? Were those rain clouds? Or just normal clouds? 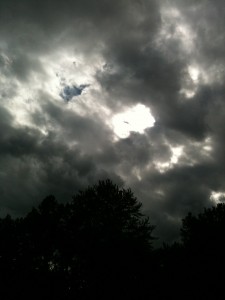 Thursday isn’t a normal work out day for me but because of weekend plans I had to shift some things around. I’ve also been battling a cold since Wednesday. What I thought was allergies was most definitely not allergies (mainly because it felt like a cold and the Claratin wasn’t working at all). I so didn’t feel like going to the gym. I decided that I would take my temperature when I got home and if I had a fever I’d take a rest day. If not? I’d go for a short run.

This is pretty epic because I haven’t run outside at all in like 9 months? The last time I ran the track next to our house I realized I was injured. That was Labor Day Weekend–the morning of my photo shoot.  What followed was a doctor’s mandate to stop running for 2 months, then there was physical therapy, acupuncture, massage therapy, yoga, lots of stretching and crying and frustrating doctor visits where they told me my IT Band would “just have to heal in time.”

Eventually I WAS able to run again but I’ve been sticking to the treadmill. In all honesty I was SCARED to run. I was scared to be injured again. I was scared of feeling any sort of knee pain or twinge in my body. So for the majority of the winter and spring I’ve been on the horribly boring and tedious treadmill. But hey, at least I was running. I did get to enjoy a run outside on my vacation in Arizona–which renewed the fire in my to run again.

I decided on Thursday that I was running the track no matter what the weather did. I put on a hat and headed out, prepared for anything. I walked down the secret pathway from our house to the track. 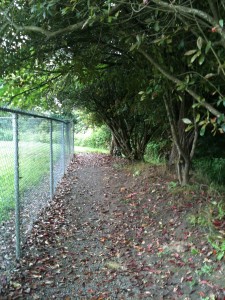 When I got to the track I was excited to run again. I told myself I’d run for one mile and see how my body felt. I had no expectations, I wasn’t worried about my TIME or MILEAGE–I was just going to run. I put in my headphones and started out. I was slow at first but then I got comfortable and before I knew it, I’d run one mile. I was VERY happy to see that it wasn’t hard and it didn’t hurt. I was worried that all the treadmill running would mean I’d be a horrible mess trying to run outside. This was not the case. 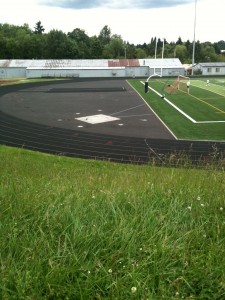 I was feeling so good I decided to do another mile. I ran. I listened to my body. I felt my breath going in and out of my lungs. I glanced periodically at my HRM to see my heart rate and I was right in the zone. 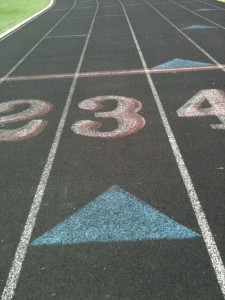 I ended up running 3 miles. 2.75 of that without taking any walking breaks. I lucked out and the weather held up. I walked back to the house to cool down and felt sooo happy that I was able to run outside again! 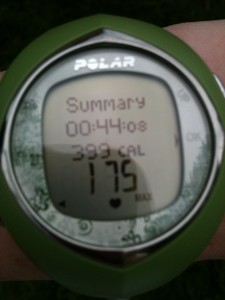 There was too much to do Thursday night in preparation for our anniversary weekend so I didn’t get to rest and nurse my budding cold. 🙁 I packed, cleaned the house, did laundry and packed a care package for Susan that will hopefully distract her from the latest hardship.

I’m looking forward to a weekend away.

QUESTION: As a runner do you run in all weather or do you obsessively track the forecast?