Sensory deprivation tanks have interested me in a long time but I had no idea there was something like that in Portland. Michael and I bought a Groupon special for 90 minute “float” session at Float On.

There are a lot of misconceptions out there about isolation tanks. When people heard that we were going to do that, some people were freaked out, some people said “Aren’t you afraid you’ll lose your mind?” I wasn’t. I had no idea what to expect BUT I imagined that it would be similar to when I go to sleep every night: I wear an eye mask and earplugs. I have my own sensory deprivation tank at home. 🙂

“Getting rid of all sensory input allows the ‘constantly-make-sure-you’re-not-dying’ part of your brain to chill out for a second, allowing the creative, relaxed part of your brain to come out and play. Without the constant pressure of analyzing the world around you, your body lowers its levels of cortisol, the main chemical component of stress. Your brain also releases elevated levels of dopamine and endorphins, the neurotransmitters of happiness.”

Sign me up! I always feel like I’m going, going, going. On some level I’m always a little stressed out, whether it’s anxiety, happiness, determination, etc, it’s not often I have a feeling of just “being.”

“Not having to fight gravity lets your muscles, joints, and bones take a well-deserved break. Your body suddenly has loads of extra resources (usually spent supporting your weight, regulating temperature, and trying not to get speeding tickets), which it gets to focus on things like healing and resting.”

This appealed to me because of how active I am, same with Michael. He’s doing over 100 miles a week on the bike and with all the weight lifting I’ve been doing, I always feel sore. I was looking forward to experiencing this kind of “break”. 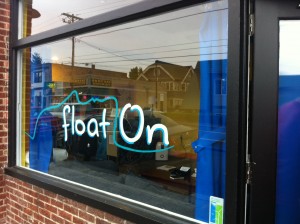 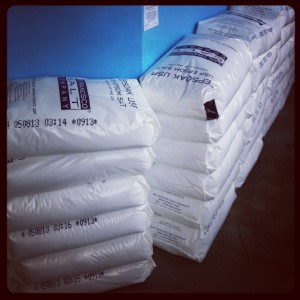 Since this was our first time, I read through the FAQ’s on the website to get an idea of what to do. They said not to shave for a day before, don’t drink coffee, eat a light meal, and don’t wear your contacts. One of the questions was: will I get dehydrated being in salt water so long? Their answer: “No- your skin doesn’t even prune up.  You do absorb a lot of magnesium from the Epsom salt though…” Interesting! (I actually was super thirsty afterward. I guzzled water, Gatorade and almond milk when I got home and never felt like it was quenched.) 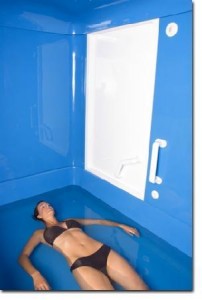 What about claustrophobia? I’ve never really had an issue with claustrophobia except in cases where I’ve been somewhere underground (like the Oregon Caves) and most recently, the MRI I got on my knees gave me a little anxiety. But all in all, not too much of an issue. I wasn’t sure what the tanks looked like, how big they were and if I’d be freaked out. They gave me the option of a tank that was bigger and less “freaky.” 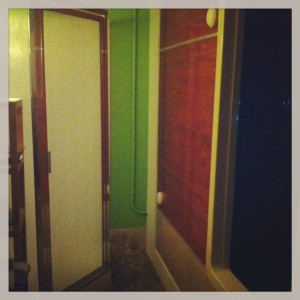 The above two pictures are of my tank. My photo isn’t great but the tank is on the right side. I could stand inside of it and raise my hands and still not touch the ceiling. It was also very wide. It was kind of like an enclosed bathtub/shower. Inside there was a handicap handle and a light with a switch. Michael’s tank was way different: 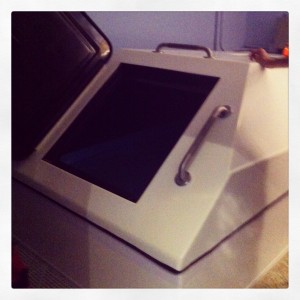 Michael called his tank a “Spock Coffin.” It was DEFINITELY intimidating and I’m glad I chose the tank that was for claustrophobic people.  They gave us a short tour and explained everything. They were filling a new tank with the salts and we got to see: 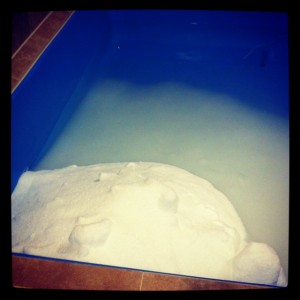 Finally, it was time for our float. Michael went in his room and I in mine. The doors locked so everything was safe and secure. I stowed my stuff and took a shower before getting in. The lights off, I closed the door to the tank, laid down and then turned off the tank light. It was very odd at first. It was completely dark. No light, no sounds. I had earplugs in, too.

I must have had some unknown cuts/scrapes on my body because for a good 10 minutes when I got in, my body was burning! Thankfully that went away and it wasn’t too bad. I tried to find a comfortable position. The guy that helped us said some people have issues with their neck in the tank. He suggested raising your arms to float above your head instead of at your side. I tried various positions and found some comfort. (Michael also had neck issues.)

Was it scary? No. Was I claustrophobic? No. (Michael said he had a little anxiety with his tank when he first got in, but that went away.) I’d read some testimonials and some people said they got the spins in the tank–I was very nervous about that, but it didn’t happen for me.

So what what was it like? It was cool. I floated on top of the water like a cork in a glass or a rubber duck in a tub. It was an odd sensation to just FLOAT and not have to work for it. My mind wasn’t RACING while I was in the tank but I definitely didn’t have a calm mind for most of the session. I thought about Hawaii, puppies, the wedding, swimming, I had songs playing in my head…so yeah. I didn’t reach any kind of enlightened, meditative state but I didn’t think I would in my first session. Maybe my next.

In between the stream of consciousness about Hawaii and puppies, I’d have moments of pure BLISS…where I was absolutely weightless and just floating, feeling disconnected from my body and my mind calmed down. Then I’d think “OOH! I am getting to that enlightened, calm state!” and then that blissful feeling was gone. That happened half a dozen times in the tank. Then towards the end of the session, I was able to latch on to that blissful, weightless feeling, completely relaxed and nearly falling asleep.

When the 90 minutes was up, music came on in the tank to let you know time was up (or in Michael’s case, to wake him up). I showered and dressed and that was the end. I felt energized and at the same time, very relaxed. It was kind of like getting a massage but not QUITE the same. 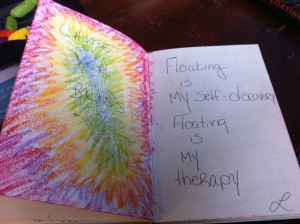 That day I’d had some knee pain and sore quads, despite being a rest day. I went into the tank with some knee discomfort. When I woke up the next day and throughout the day, no knee pain. It felt nice! I want to do the float again. I don’t think giving it one try is going to give me the best representation of what a session is really like.

QUESTION: Have you ever tried something like this? What was your experience? 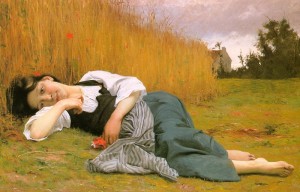 After noticing some weird body aches on my Rest Days I realized it might be time for a “reset.” I have a steady workout routine that doesn’t change much (the activities change but the amount doesn’t change) but sometimes you just need a break.

I take 2 Rest Days a week but I split them up. Lately my workouts were feeling uninspired. That in combination with body aches makes me think I might be over-training.

Signs You May Need a Break

I wouldn’t say yes to most of those. I do have some soreness and boredom. Either way, a mini break can’t hurt anything.  I need to break out of this plateau. Change my routine. Change things up. Reset my body.

Most athletes regularly schedule a week off from activities every 8-12 weeks.

“One major factor that is often forgotten is RECOVERY! Recovery is vital for the body to continue making progress, whether it is muscle gain, fat loss, or both. Not only do we have to recover physically from one work out to the next, but also mentally. Even though we take days off from the gym a couple times a week, after weeks and weeks of pounding our bodies, we may require more than one or two days. That is why the training technique, or should I say “non” training technique, of taking a week off can be what your body needs to break your plateaus and spark your body into better gains and faster progress.” (source)

So for three days I did a Detox of sorts:

Day One was easy. Day One was basically a rest day. It feels no different than a normal rest day. It was a good reset for my brain and body. The challenge will be the rest of the days. I never take more than 2 days off in a row unless I’m sick. So the third day will be weird.

How I Did: I was fine. After 4 days of working out a day off was needed anyway. Like I said, Day One would be easy. I did not eat any candy! I made it through the day without being tempted, either. I did chew on some gum at work but when the urge to snack hit me Monday afternoon I drank some peppermint tea instead.

How I Felt Physically: I felt tired and run-down.  I don’t know if that was due to it being a Monday, Daylight Savings time, or it being a rest day but I was just tired.

How I Felt Mentally: Mentally I was really glad I was taking a break. Mentally I felt drained and wasn’t looking forward to the gym, so that was a good sign to me that I needed the break.

It was nice to have a night off. I had a good evening out with a friend too!

How I Did: I most definitely needed day two. At first I was starting to feel guilty for taking time off and “slacking” from my schedule but my body hurt.

How I Feel Physically: My body hurt. I don’t know if they were phantom pains or if my body is actually worn down. Who knows? All I know is that I had body aches I couldn’t explain and I was glad I didn’t have to work out. I was also famished. The hunger levels were high all day long and I never really felt satisfied.

How I Feel Mentally: I felt relieved to have another rest day. The idea of going to the gym did not appeal to me.

What I Did: I read a book. In my free time I read this book: 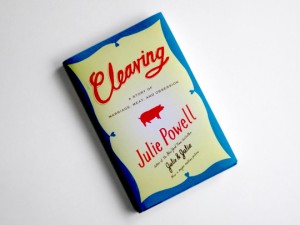 Cleaving: A Story of Marriage, Meat and Obsession by Julie Powell. She’s the author of “Julie and Julia“–which I LOVED. I loved her first book, it inspired me to want to try more adventurous dishes in the kitchen and I really enjoyed the movie. It was charming and romantic. Cleaving? Not so much. I did not like the book at all, honestly. It was lacking all of the charm and romance of the first book. Her story was about infidelity and butchering meat. Great topics, right? I kept trying and trying to get into it but she made herself SO unlikable to me I didn’t really care what her story was about. Bummer.

I also started a new book: Starvation Heights: A True Story of Murder and Malice in the Woods of the Pacific Northwest. Creepy!

I also did some accessorizing. I have a ton of jewelry but rarely wear them anymore because I’m usually heading to the gym after work (or biking to work). It’s just not something I think about doing anymore. Well, not having to go to the gym for a few days I started rotating through my necklaces and earrings. 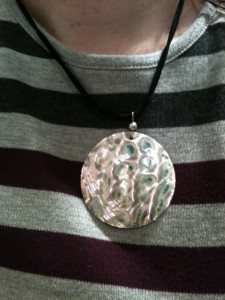 Michael commented that he liked my “accessorizing” lately–that it was feminine and romantic. I guess I’ve been doing the “gym rat chic” a little too much lately, huh? 🙂

QUESTION: Do you ever take a break like this? What did you notice?