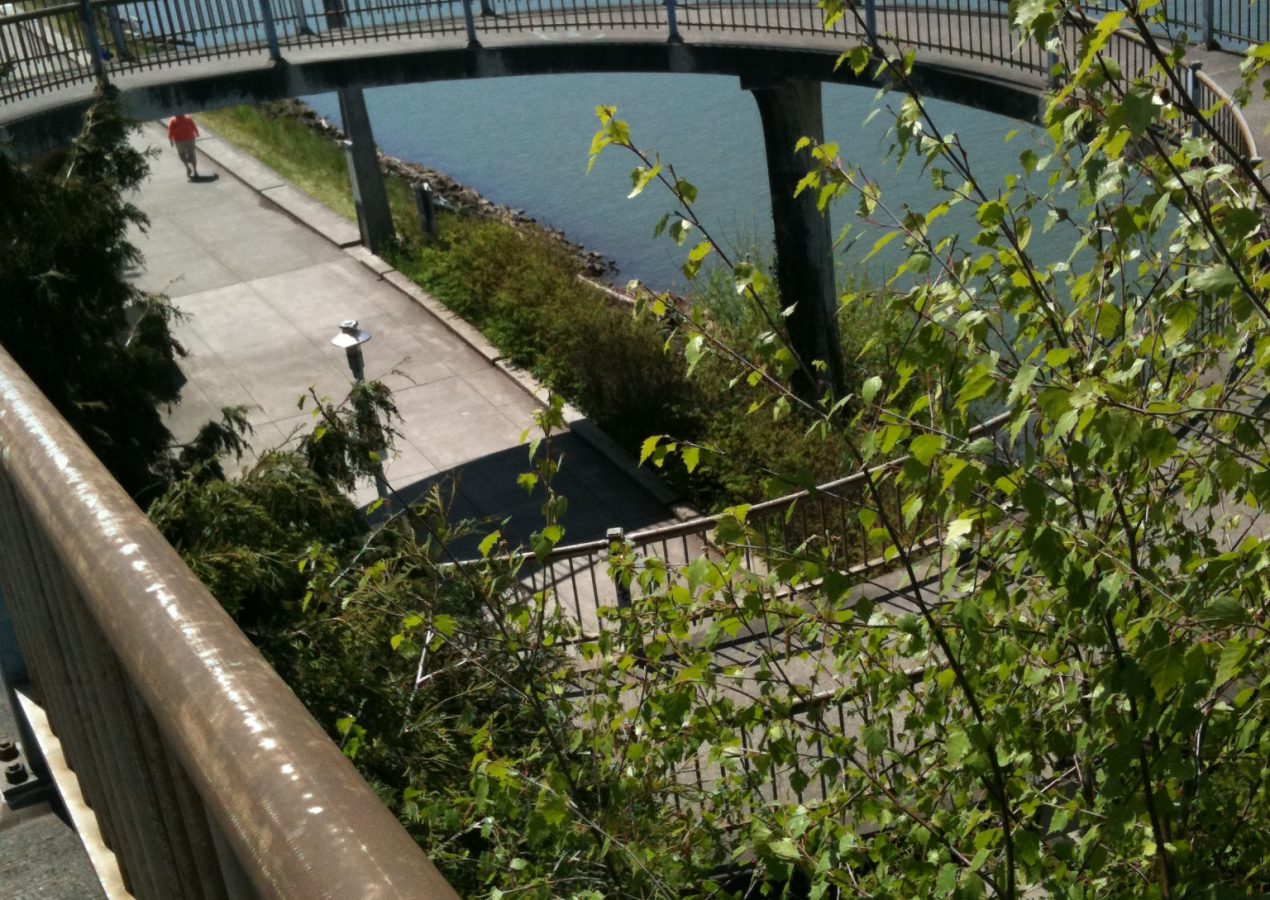 I wasn’t really feeling like biking to work this week. In fact, Tuesday night I was secretly hoping it would rain on Wednesday so I could push the ride to Thursday. I don’t know why I wasn’t feeling like it, but Wednesday morning I still didn’t really want to ride. I did it anyway. I knew I’d feel better if I did it, plus I have to take advantage of what little sunshine we have right now. Plus I really have to prepare for the Gorge Ride. It’s not far away and I am no where NEAR ready to do 40 miles of hills!

I left my extra jacket in the car and it was pretty cold when I started out on the bike. I warmed up quickly though, so that was good. I rode passed the above church. Not religious but I love old fashioned churches. It’s so cute!

The trail was a ghost town Wednesday morning. There were very few runners and cyclists out there with me. One guy rode by me and said Good Morning, which was nice. Since Michael wasn’t riding to work Wednesday (he did on Tuesday), he lent me his winter cycling gloves. They were REALLY nice! My hands weren’t cold at all.

The Hawthorne Bridge was pleasant and uncrowded as well. I had a lovely ride despite my reluctance!

I arrived at work in only 30 minutes and it took me about 5 minutes to lock my bike up.

Once again I took the Morrison Bridge out of downtown and went up Water Avenue, passed OMSI and onto the Springwater Trail.

There’s a lot of construction around where I ride right now. There’s also a lot of big scary construction trucks and weird detours. I’m being a lot more cautious because a few times I’ve wondered if those guys in the trucks can see the cyclists.

The ride home was hard. It was especially warm out, my back hurt, my backpack was heavy, my bike shorts don’t have great padding, and my legs felt like lead. Not only that, I almost got CREAMED by a jerky cyclist that decided he was in too much of a hurry to respect common courtesy. Ugh. It’s jerks like that that give cyclists a bad name. He came “THIS CLOSE” to plowing into me head first. Ugh.

I arrived back to the car in Sellwood after a ride in the sunshine. At least I had that! I’m glad I rode even though the ride home was brutal.

When I got home I had a snack of CRACK IN A CAN.

Seriously. This stuff is addicting. I think I chowed down two servings before heading outside to work in the yard. Michael and I spent a good hour and a half in the garden and then made dinner.

Dinner was baked acorn squash, steamed cauliflower with Goddess Dressing and pork chops. It was healthy and filling.

I collapsed into bed last night and fell asleep INSTANTLY–which never happens to me. I slept like a rock, completely exhausted.

QUESTION: Is your city a safe city? Do you feel safe running or cycling alone? What safety measures do you take?

You Came to Burn Calories, Burn Them!