I remember when my best friend Rachel and I went to Chicago and on our last day there we went out to a fancy dinner at a fancy restaurant and did the “chef’s choice” meal. It was like 5 courses of whatever the chef decided to make for us. It was the first time I’d ever tried ahi tuna and it was the first time I’d ever had butternut squash. It was a creamy butternut squash soup in an espresso-sized cup and it was so amazing; I wondered, how had I never had butternut squash soup before?? 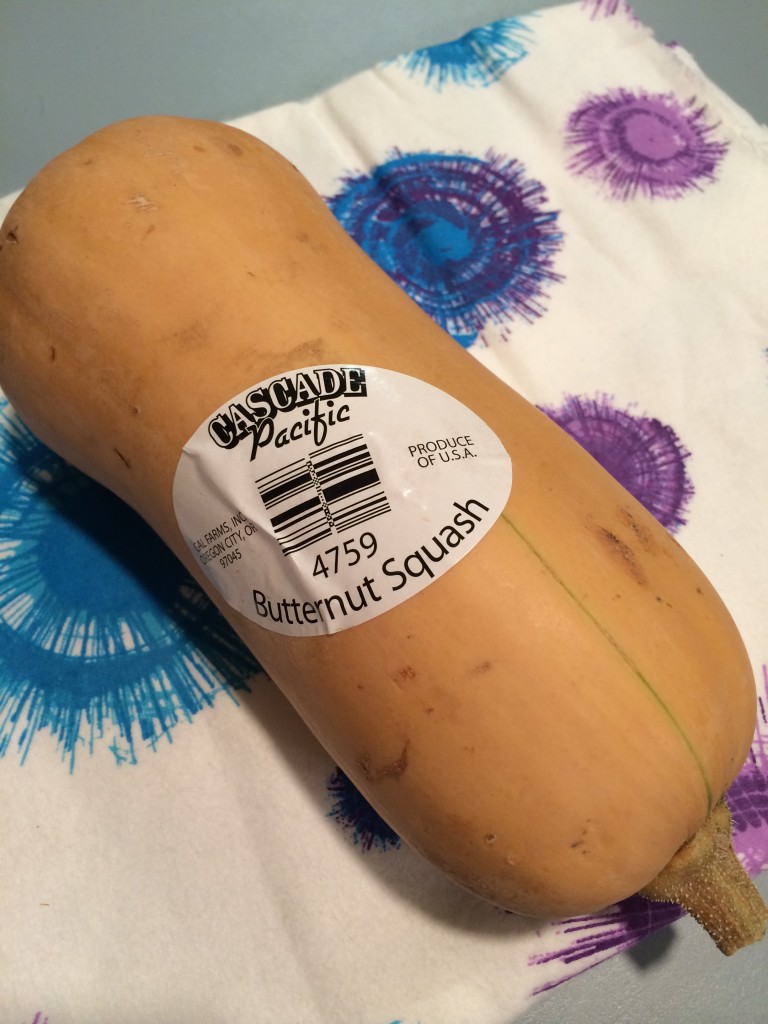 I wanted to make it for myself. It sure took me long enough to give it a try…Like 10 years! But finally, I tried. I searched for awhile to find the right recipe. I remembered it being pretty sweet and I found a lot of recipes that claimed it was so sweet it could almost be a dessert. That wasn’t quite what I was looking for. I wanted savory, with a hint of sweet.

I found this recipe:

It sounded pretty good to me! I knew I’d add a little bit of extra things here and there that I had seen from other recipes I liked. For example, a few recipes called or a pinch of cayenne pepper and I LOVED that idea. 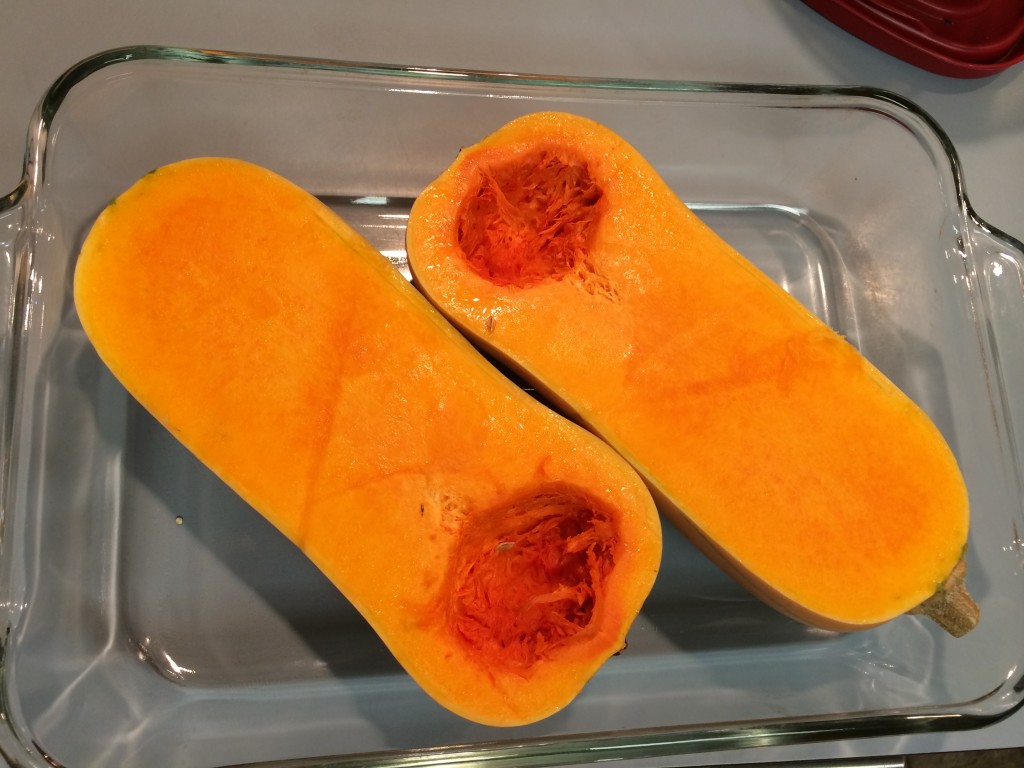 Other than that I followed the recipe pretty closely, except for the bay leaf (didn’t have one) and I added cayenne. I put it all in my Dutch Oven and let it simmer down. I used my immersion blender (which I LOVE) to puree it up.

I taste-tested the soup after pureeing it and added a pinch more of the cayenne pepper. Once I felt like it was good, I dished it up. I thought it was a little odd that the recipe called it “Butternut Squash with Toasted Cashews” when the cashews were really just a garnish. I read the recipe a few times to make sure I wasn’t skipping a step. Sure, the cashews were nice and added a nice crunchy texture to the soup, but I don’t know that it added anything else beyond that. I originally thought the cashews would be ground up and mixed in.

The texture was super creamy. It was a little too close to baby food/applesauce in consistency and I could have added more milk to it to make it more soupy. 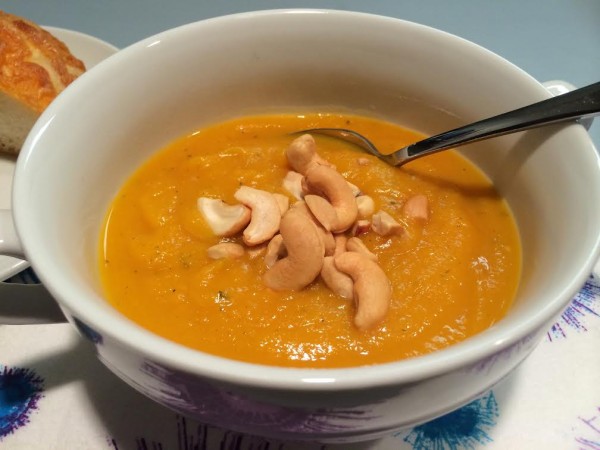 I served the soup with a green salad (swiss chard, spinach and kale) with Bleu cheese and a raspberry vinaigrette dressing. I also had one large cheesy kaiser roll that I split in half for Michael and I to share. 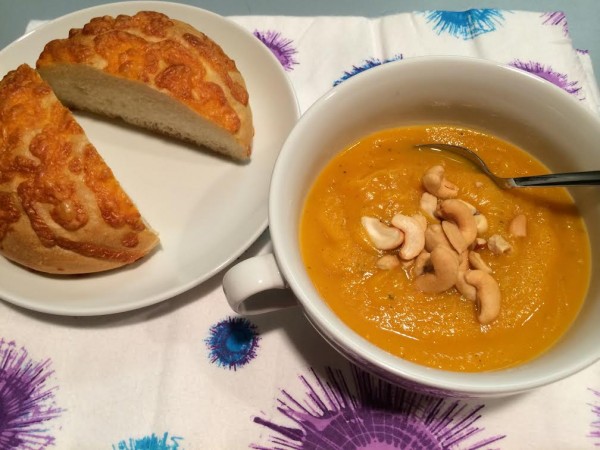 Michael and I both liked the soup a lot. It was pretty easy to make. I would add more spice to it next time I think. I got 4 servings out of this recipe and that made it around 150-165 calories a serving. Super low but it was filling and I didn’t feel like I was deprived of food afterwards or hungry in an hour. 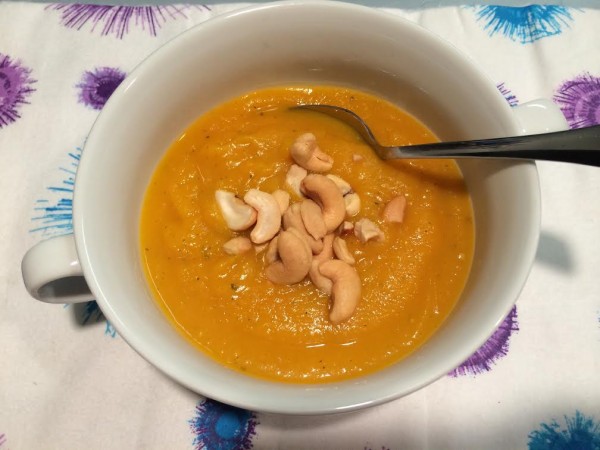 I had some leftovers that I took to work for lunch on my two rest days (there weren’t enough calories in it to eat on a gym day). It was just as good the next day. A little bit of spice, but not too much. It was creamy and the best part— SUPER filling for less than 200 calories!

I will be experimenting more in the future trying to find the perfect squash soup recipe. Do you have a favorite? Please share!

I’m not really a “take it easy” kind of girl. I tend to have one speed: go, go, go. It’s very difficult for me to rest, or go slow. Perhaps the inflammation in my knees is my body’s way of telling me it’s time to rest for a bit. Right, right, right. Gotcha knees! You don’t have to keep reminding me.

Last Friday night I went to the pool and swam 1.75 miles in 55 minutes. I used the buoy for about 95% of the swim. I only did a few laps where I attempted kicking with my legs. While it didn’t hurt, I didn’t want to push it. When I got home, feeling okay, I had blackened salmon, caprese salad and peas for dinner. I was so hungry I didn’t take a picture. 🙂

Saturday morning, I ate a small breakfast before heading to the gym. I toasted a piece of Dave’s Killer Bread, put cream cheese and tomato slices on it, and had 1/4 cup of plain Greek yogurt with some raisins and peanuts in it. Kind of a weird breakfast but it was tasty and got me through my workout. 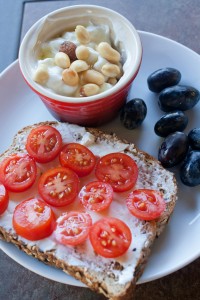 Since I’m giving my knees a rest, I skipped the bike, treadmill and elliptical. It was kind of a bummer but only for a moment. I got over it quickly when I started focusing on my routine. I warmed up on the row machine for 5 minutes and then spent 30 minutes doing a weight workout. Here was my routine: 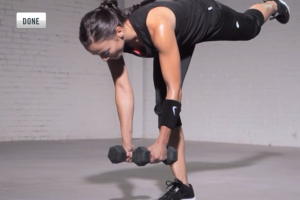 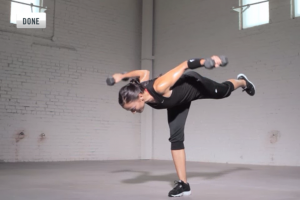 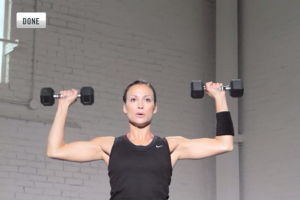 I did this routine for 30 minutes. I didn’t count how many reps I did but I was a sweaty, hot, quivering mess after I was done. I really, really liked the Single Leg Deadlift Reverse Fly! It was my first time trying it. I usually steer clear of anything “Dead lift” because I am wary of injuring my back doing it wrong. But this one particular exercise was a lot of fun. I used two 5 pound kettlebells for it and even though it looks easy, it’s a lot harder than it looks. I discovered I do not have very good balance/stability on one foot. This is something I need to do more often, I guess.

After that I used the machines to lift weights. I spent an hour doing that and finishing up with lots of stretching and foam rolling. My hope is that a week or two of taking it easy is all I need. 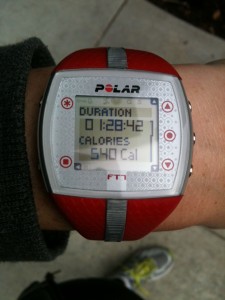 It’s been 2 years since I’ve had an injury that had me take a break. I guess that’s a really good streak of luck…I tried not to think about my knees too much, even though I was feeling frustrated that I had so many limitations. Even with the IT Band issues I had two years ago, I could still bike and walk. This particular injury is really hard to deal with.

I grabbed some lunch from Jade Bistro–I’d been craving the salad rolls since I had them with my friend Sam. I got an order of the shrimp and chicken salad rolls, and then the grilled tofu salad. The salad had sweet and sour sesame dressing to go with it, and of course peanut sauce for the rolls. It was so good! This might be my latest obsession. I want to make my own salad rolls at home. I need to try that. 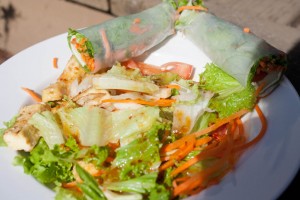 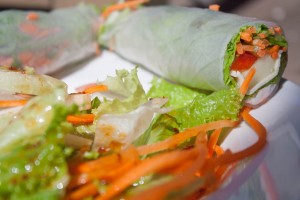 I ate half of both and saved the rest for Sunday’s lunch. It hit the spot. It felt healthy and hearty. I took it easy the rest of the day. I got caught up on some TV shows (holy crap premieres of SVU and Grey’s Anatomy!!!). My knees were feeling good. I had no pain or inflammation in them and when I walked it didn’t feel like they were slipping out of their spot. It’s hard to describe how they’ve been feeling since that crappy run I did. But I’m glad I felt relatively normal after taking a week off from knee exercises.

Dinner was marinated steak, squash, and caprese salad (can you tell we need to go grocery shopping for some veggies?!). Michael’s first week at his new job went really well, but he was out late every night (which was good) so shopping wasn’t really a priority. I was content to eating easy foods on my own. 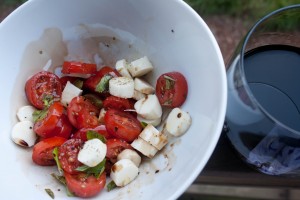 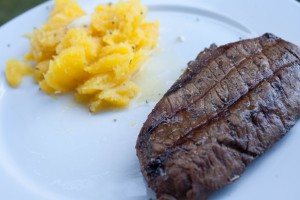 I love that squash season is back! Squash is one of my favorite fall and winter veggies. I usually just make them simply, baked with some butter, salt and pepper. But I really want to give the baked acorn squash with brown sugar a try. I’ve never had it because it sounds like it’s overly sweet but…I’m kinda dying to try it! Do you have a recipe that you like?

QUESTION: Can you take it easy?