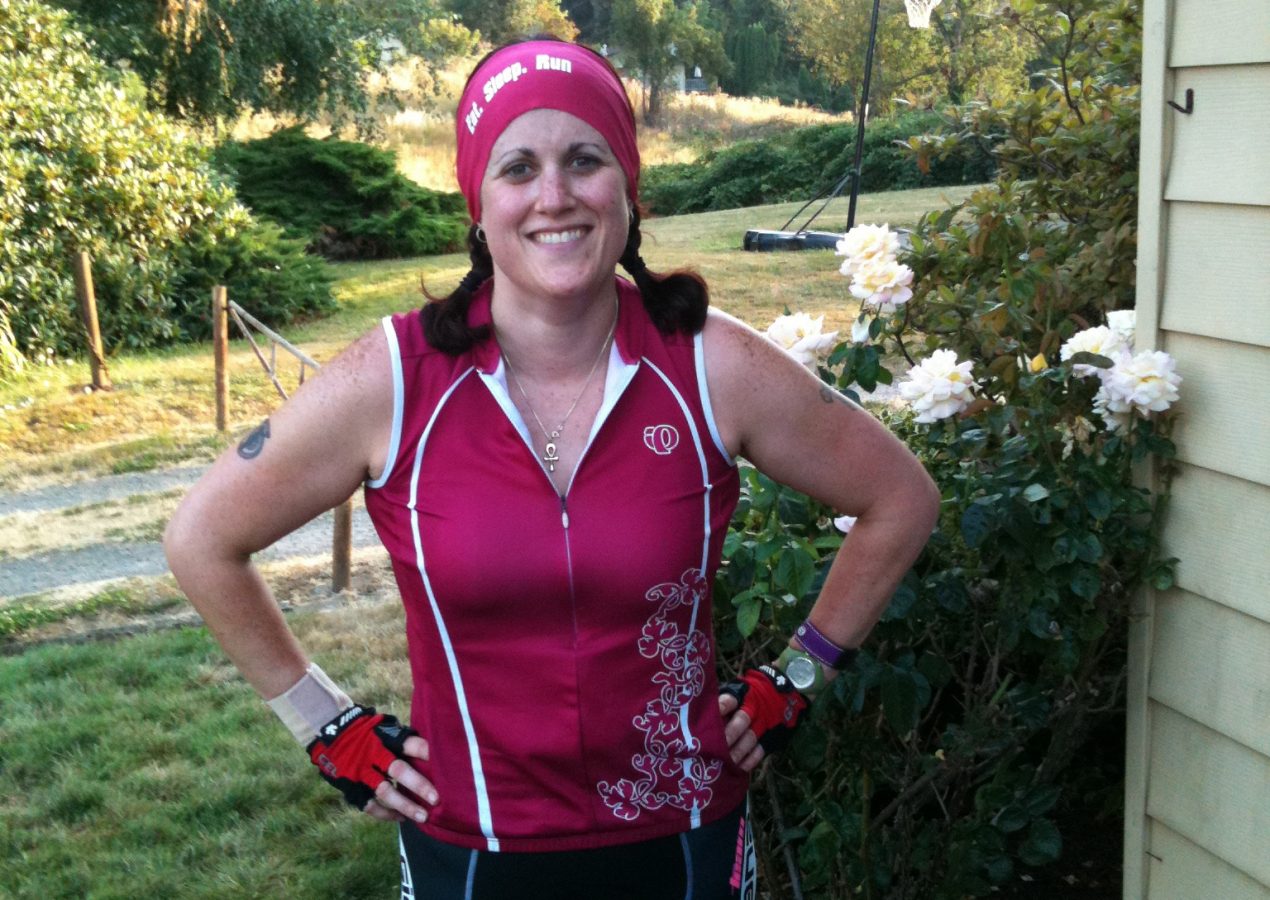 No, I’m not 25 and hot…I’m more like 31 and hot. Hot weather that is! But on Wednesday it was going to be a hot 25 miles—over 100 degrees. I had to get to work a little early to get prepared for the day so I had to get up a little earlier.  It was dark out. The kind of pitch-black darkness that September brings and reminds me summer is almost over.

I pumped my tires (to 140) with the bike pump. I used to struggle with this task and then Michael got us a new pump that’s much easier to use. We pump our tires before every bike ride. It’s a good habit to get into. It gives you a chance to inspect your tires, too. There’s nothing worse than being stranded somewhere far from home because the tires weren’t pumped. (Have you read my post on Tips for Commuting By Bike?)

It was so early the sun was still coming up. It was light enough to bike by the time I left, though. The temperature was weird. It was supposed to be 102 degrees on Wednesday. At 6:40am it was in the mid-60’s. A weird, in-between temperature that makes it difficult to dress properly. Jacket? No jacket? Arm warmers? I set out with my jacket on and after two miles I stopped to switch to the arm warmers.

It was quiet out that early. I biked my route with no issues. I need to find a new route for part of the commute. There’s one back street that I ride on from our house with the worst roads. I think biking on cobblestone would be more comfortable. They really need to repave.

The Springwater Trail was empty (is everyone still on vacation?). I felt like I was really slow for most of the morning commute. I wasn’t tired, it just felt like my quads were not cooperating. They were working really hard and not getting me anywhere very quickly.

It definitely felt like I was biking against the wind the entire 12.27 miles. I got to downtown and made it into work at my normal pace, despite my slow legs.

I like seeing a number like that! For my morning snack I ate some Trader Joe’s cottage cheese.

I ate my hard boiled egg for a pre-ride snack, slathered myself in sunscreen, and braced myself for high temperatures.

And it was hot! It wasn’t muggy, it was a stagnant heat. The kind of crushing heat that just wears you down. I got out of downtown easily, even though I left at 5 instead of 4:30. I wasn’t too bothered by the heat unless I stopped. I created enough of a breeze with my biking to make it tolerable.

I got to the Springwater Trail and stopped briefly to have a drink.

It was half Gatorade 2 and half water. It was very needed on such a hot day.

The heat wasn’t too bad as long as I kept moving. There were a few parts of the route where the temperature was tolerable. The shade was nice.

I felt okay during my bike ride home. My legs cooperated a little more than the morning workout. I got home –dripping in sweat, hot, hangry and tired.

I was glad that I didn’t shy away from riding to work because of the “potential hot weather.” That was just an easy excuse to not do anything and I beat it.

I had a post-ride glass of chocolate milk but that didn’t help the hunger. I did crash a little bit after Wednesday’s ride. I was tired, hot, hungry and irritable. For dinner we made spinach salad with chopped tomatoes from the garden, black olives, red onion, red peppers, broccoli, beans, sour cream, guacamole and chicken.

Hood to Coast: Hurry Up and Wait