The day began cool and overcast with the promise of 75 degrees and perhaps some sunshine. I took last week off from biking to work because of the rain (back to spin class) so I was looking forward to getting back outside. My morning began early and I felt groggy and tired–completely unmotivated to get out of bed. But I did. And I ate the last pancake from the weekend with one fried egg on top (super fast breakfast) and managed to get out the door on time. 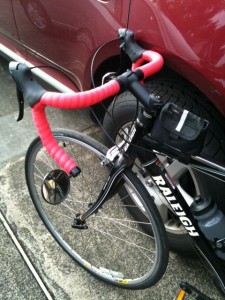 Check out my bike makeover! Michael rewrapped my handlebars with new red tape that is very soft (and clean). I think it looks great. 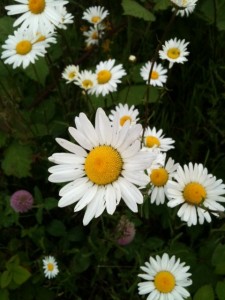 My ride started slowly; my legs felt lethargic and tired. I was slow on the hills and felt fatigued but eventually it got better. I can’t say that my morning ride was fantastic. Several times a car just missed me. It was like I was wearing an invisible cape or something. I hate that!

I also got stuck at an intersection that I despise. It never senses bikes, so the light never changes. No cars were coming behind me to trigger the sensor and I just missed the light. I was really annoyed. I tried the crosswalk and the whole thing was a debacle. I should have just waited for a car to come and trigger it! I hate that intersection. It added at least 5 minutes to my commute. I need to find another route. 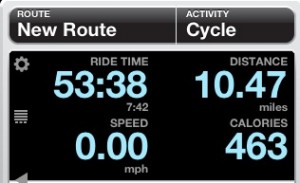 Another thing, my phone decided to restart on itself mid-ride so I don’t think the mileage is accurate. I think it’s really 11.47 miles. 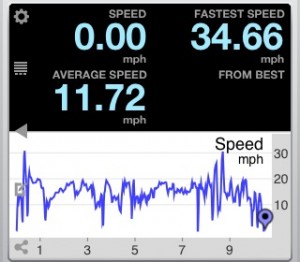 I think that 34 mph was downhill. Hehehe I am definitely not that fast. Luckily, the wind was at my back on the Springwater Trail so I was able to make up some time. The one good thing about my ride was that I spotted a deer on the trail! He was beautiful, young and alert. I wish I’d gotten a better photo. 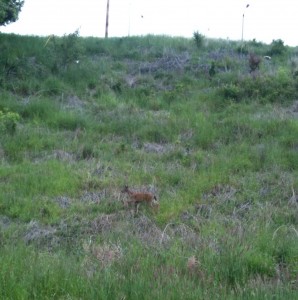 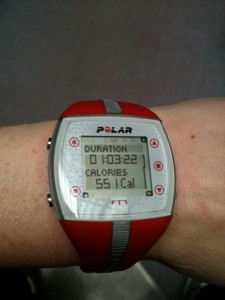 My snacks for the day: apple in the morning, bagel thin sandwich with cream cheese and ham, crackers and cottage cheese for my afternoon snack.

The day warmed up nicely and the sun came out. I don’t know what the temperature was but it was pleasant. Luckily I made it out of downtown quickly and crossed the Morrison Bridge in no time at all (I hate biking downtown, have I mentioned that?) and passed by the Rose Festival carnival that is in town. I felt okay other than my lower back being tight for the first few miles of my ride. 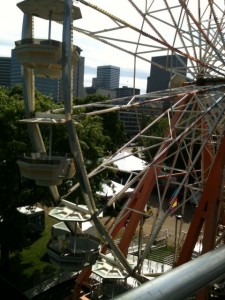 For the rest of the bike ride home, I played the game “Do I Have a Flat Tire Or Don’t I?”. I hate this game. My ride was bumpy, the tires felt like they weren’t quite right, but every time I stopped and checked, the tires were fine. Ride a few miles, “do I have a flat tire?”, check, nope it’s fine, ride a few miles, “it’s totally flat”, nope. I got through the annoying intersections that cause me anxiety without the same issues as I had that morning and made my way to the quiet road to my house. 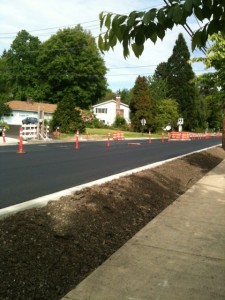 Remember all that construction and detours on my new route? Well they are finally paving! The roads were shut down temporarily while they were laying the black top but the workers flagged me through as long as I stayed on the sidewalks. I thanked them and zipped on my way on the sidewalk. I am totally looking forward to biking on that nice, new road! 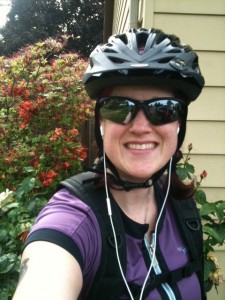 I wanted to get a picture of me in front of our beautiful blooming rose bush but my aim wasn’t that great. I had a good ride home and immediately had a small glass of chocolate milk when I got home. 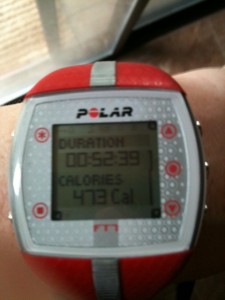 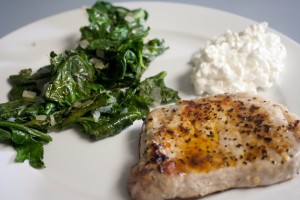 Dinner was a boneless pork chop, sauteed kale from our garden with shallots and cottage cheese for me. (Currently going through a “eat cottage cheese at every meal” phase.) And I had 1 glass of white wine with dinner while Michael and I got caught up on AGT. 🙂 Oh and vanilla pudding for dessert. And I still have nearly 400 calories left for the day!

QUESTION: Have you ever seen wildlife out on a bike ride, run or hike?