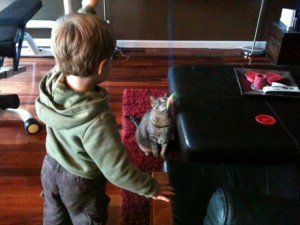 We had some house guests this week. A friend of Michael’s came down from Seattle and brought his adorable four-year old son. The young boy walked into the house, took one look at Fat Kitty and said “HE’S BIG!” and proceeded to chase him around the house, willing the terrified cat to play with him. Fat Kitty was curious at first, sniffing him and letting him pet him. They even played together briefly. That was short lived and Fat Kitty started hissing his dislike. The poor kid turned to me and said “He roared like a LION!” 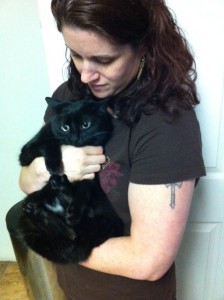 Poor Maya was not amused at all. She curled up into a little ball in the corner of the living room, howling like she was being attacked (she wasn’t). I picked her up and tried to calm her down to no avail. Eventually both cats ran to the bedroom where they found refuge under the bed. All I could see were four wide, glowing eyes.

Having a four year old in the house was fun and exhausting at the same time. It’s been awhile since I’ve been around one and forgot just how fascinating EVERYTHING is and I realized our house is so not kid-proof in any way! Michael was great with him and the two of them played Wii boxing. 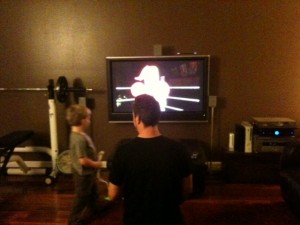 The next day I silently skulked through the house so I didn’t wake our guests and got ready to bike to work.  I’d planned on biking to work on Tuesday and woke up to pouring rain. Obviously the plan was changed. The forecast for Wednesday was 80 degrees and zero percent chance of rain. Finally! It feels like summer is never going to arrive in Oregon! When I got up, however, the morning was gray and overcast and very chilly.

I had a quick breakfast of plain Chobani Greek yogurt with sliced up strawberries and Fiber One cereal. I also had half a toasted English muffin. It was filling but light enough on my stomach. 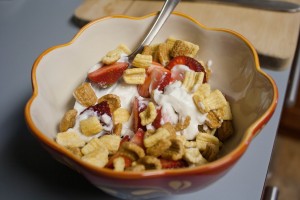 I was starting to regret my decision to bike because it was so cold out, but I was resolved to get in my miles and the ground was dry, so why not? The air was misty and cool and reminded me of the beach. 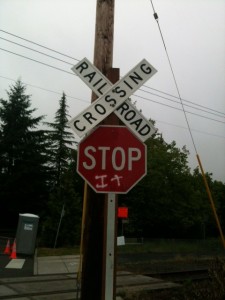 I got a later start that I wanted to so I picked up the pace on the road to make sure I got to work on time. I was pretty fast and luckily made all the lights I usually have to sit at. My morning ride had no worries or complaints other than the one I already knew: I need to adjust my bike seat. I’ve been wondering if that was the issue for a few weeks now and I am almost certain it is. MUST be remedied. 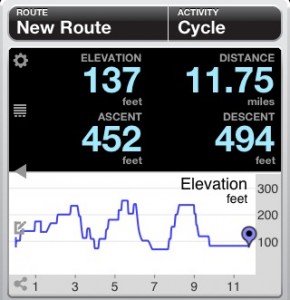 Sweaty, energized and starting to feel some hunger pains, I arrived at work just in time. The day warmed up nicely, too. Could it be true? Could summer be here? 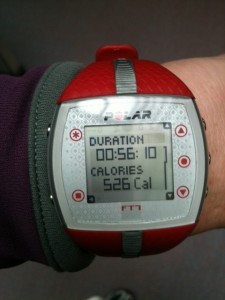 The afternoon was a much nicer ride–no frozen toes this time! It was a hot one and I enjoyed the sun beating down on my skin. I was not quite as happy about the little tufts of white fluttering through the air (Dogwood trees perhaps?) causing my allergies to flare up. Tis the season. There is a lot of construction on the Springwater path making way for the new lightrail line. It makes for a very confusing go of it. 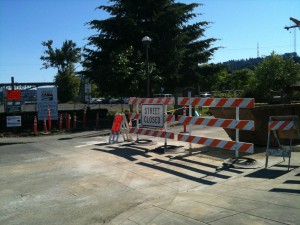 The Springwater trail was good, not crowded and I made my way home without incident. A cyclist that was drafting off me for about a mile, came up beside me and started having a conversation with me. About what else? The weather! The most popular topic in Oregon. 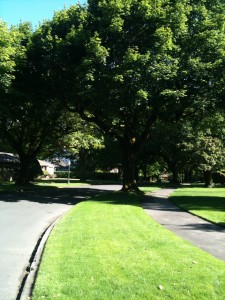 I found a new route through Sellwood that avoids one of the very busy streets. It’s a quiet neighborhood with huge, old trees and nice shade. Next time I will take some pictures of these houses! Wow! 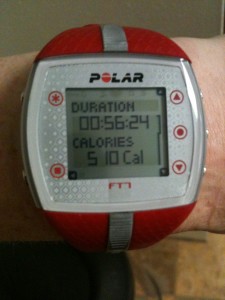 I got home and immediately had a small chocolate milk to drink. It was a warm ride out there.

I had nearly 1700 calories left for the day by the time I got home from my ride. I was famished and Michael and I were craving burritos so we went to Laughing Planet. 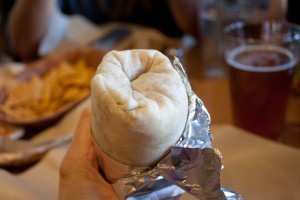 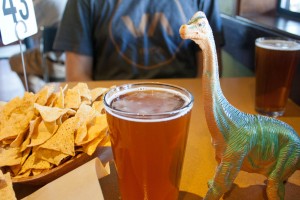 And of course a Ninkasi Tricerahops beer. YUM. That burrito did not stand a chance against me! It was gone in seconds. Okay, maybe not seconds. But you know what I mean. It felt like Michael and I hadn’t talked in a week because we’ve both been so busy. It was nice to catch up. And it was nice to go home to a child-free house! 😉