Saturday morning we woke up with the idea to go hiking. It was supposed to be one of the last nice days in the forecast for awhile. I had my reservations, though. Michael had taken Bella for a hike with a friend earlier in the week and then we went snowshoeing on New Year’s Day. She was doing well and recovered quickly from everything, my body was good even though we’d done more in the snow than planned. But I just thought we were borrowing trouble going for another hike so soon. Still, I agreed because it’s an activity we can do together to get fit, Bella loves hiking and I didn’t really want to face going to a crowded gym.

We set off in the car towards Forest Park, after picking Lower Maple Trail Loop. Because all the trails in Washington Park connect, you could really just keep going. But this trail was marked as “moderate” and the loop was supposedly 3 miles. (SUGGESTED ROUTE: From Saltzman Road off of Hwy 30, turn right on Maple Trail, left up Quarry Trail, and then right on Leif Erikson. Return via Maple Trail.) 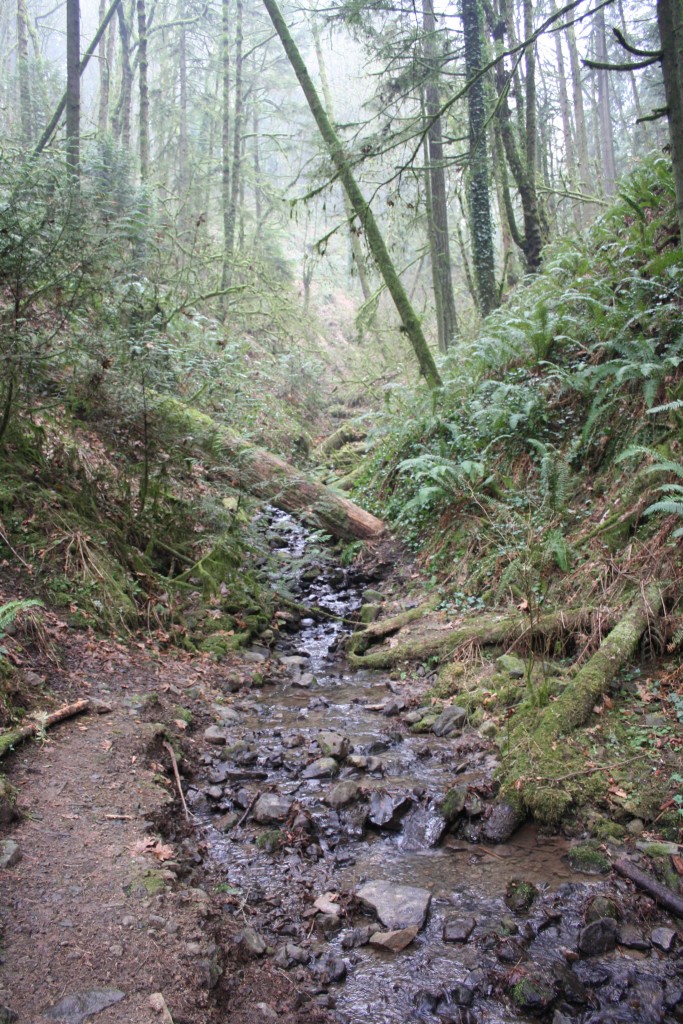 It was sort of on the rainy side but not raining–just the misty dew from thick fog. I figured it would be alright once we got on the trail and in the trees, and it was. We never got “rained” on. We got to the trailhead off Saltzman Road (which is a terrifying, narrow, cliffside road with not enough room for two cars to pass through at the same time). 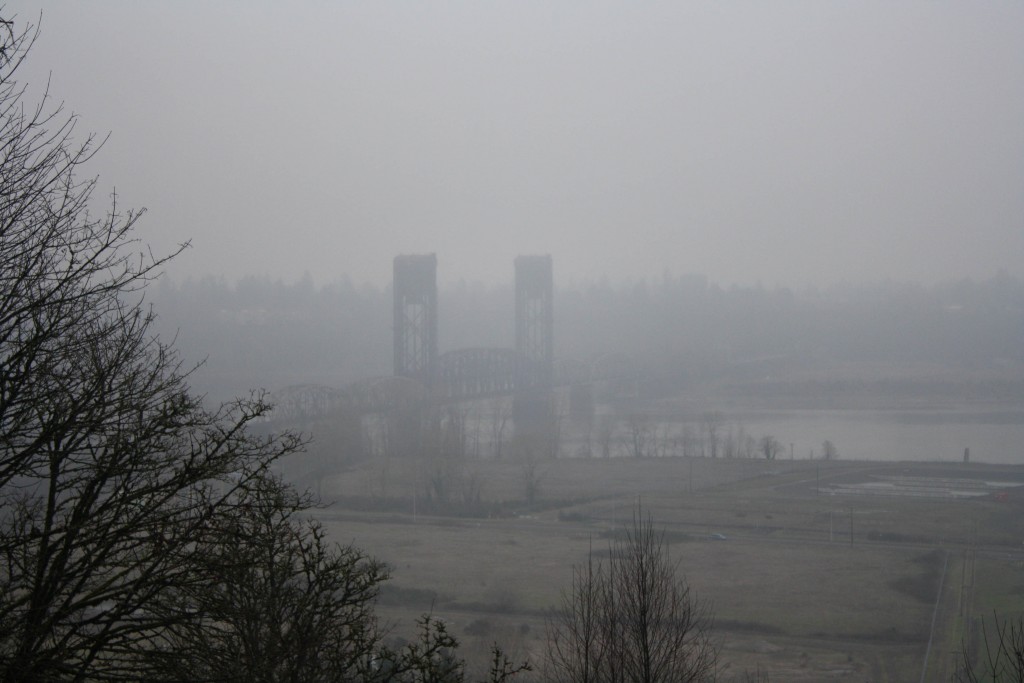 The trailhead was packed with cars but we found a spot and started out. We saw TONS of trail runners out there and a few mountain bikers. There were a bunch of other hikers, too. 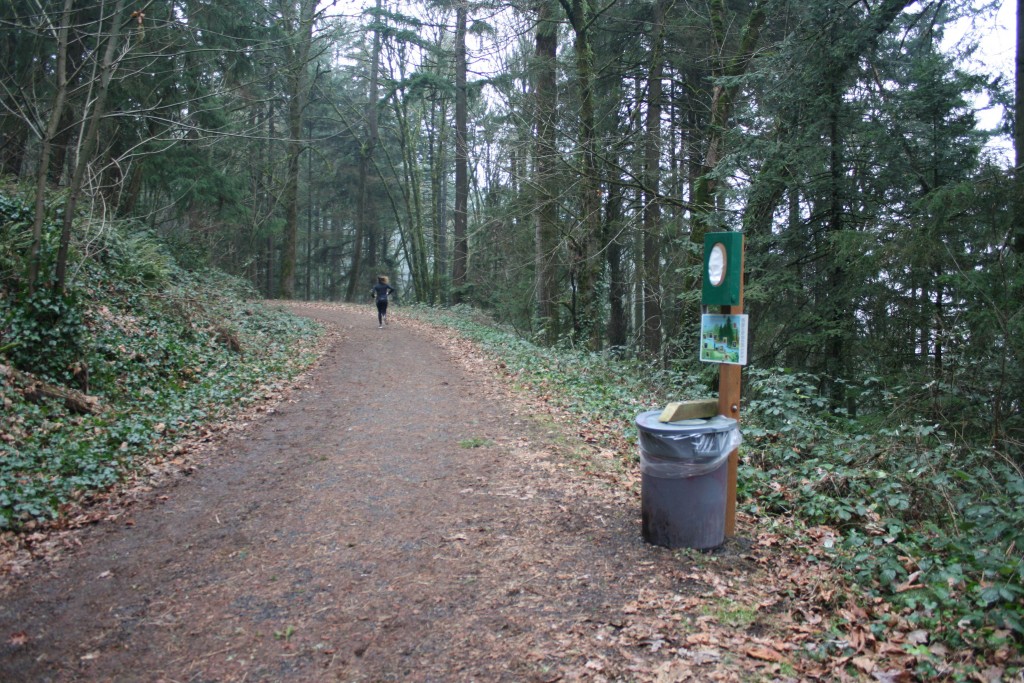 We took the main trail in and there was a fork–the lower Maple and higher Maple. We went up first. I saw a sign that said there was a trail closure, but it didn’t say where, so I ignored it. 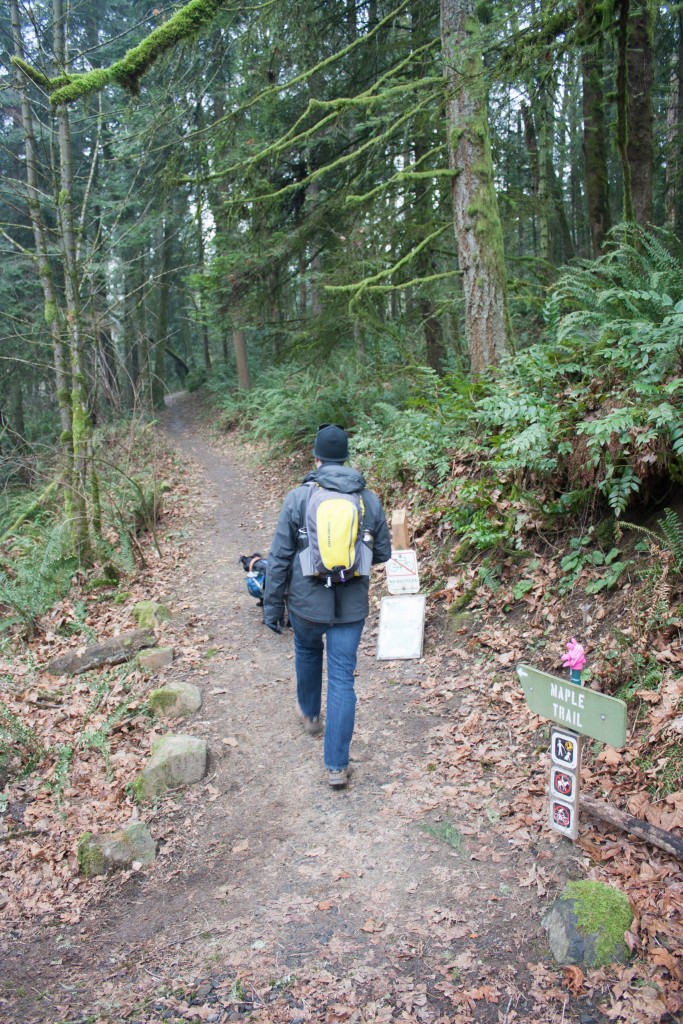 We hiked probably a mile and a half up through the forest and then came to the closure: 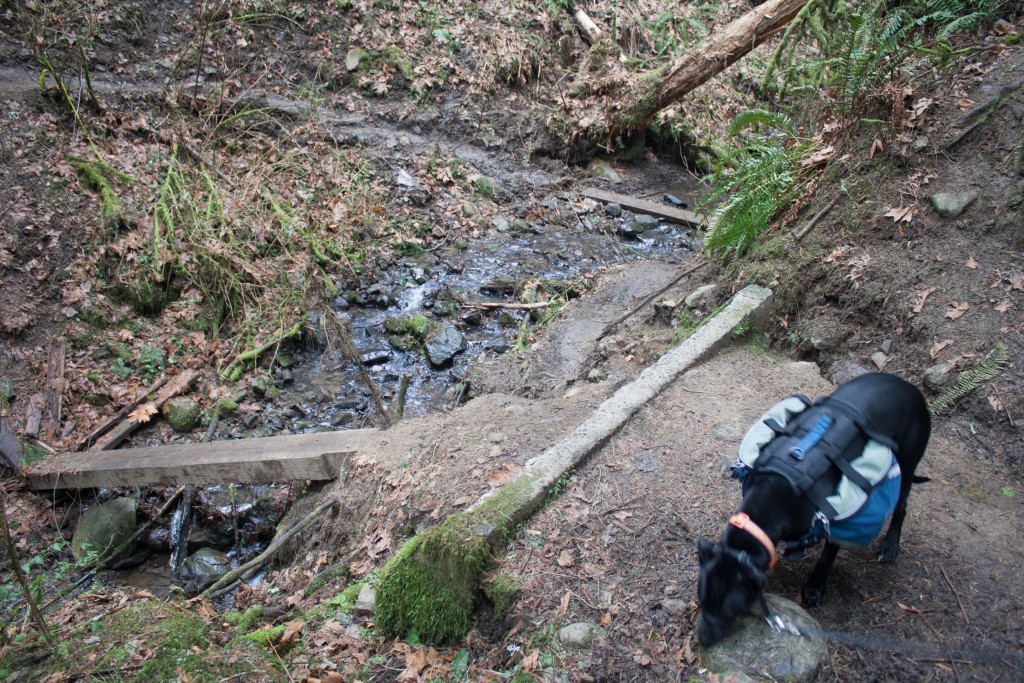 The bridge had washed out.  No big deal, we hiked back down to the first fork in the trail and took the lower Maple Trail instead. There was also a fork mid-trail for I think Firelane 4 trail (I can’t remember now) that looked like it had some elevation to it but we decided to stick with Maple on this trip. 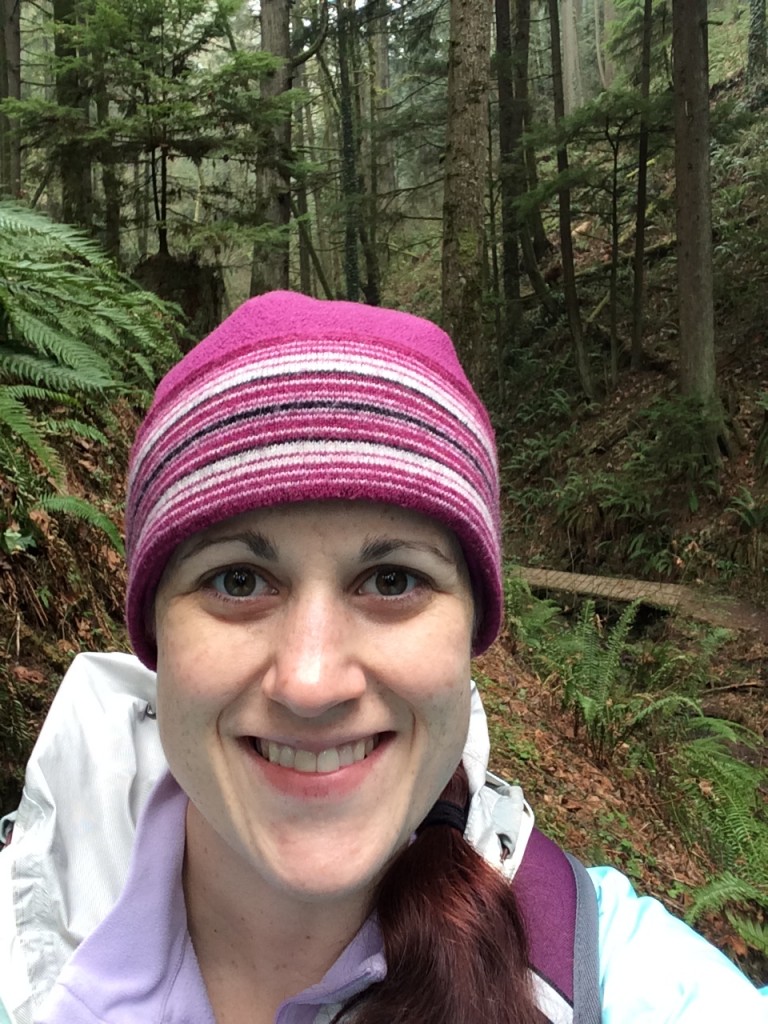 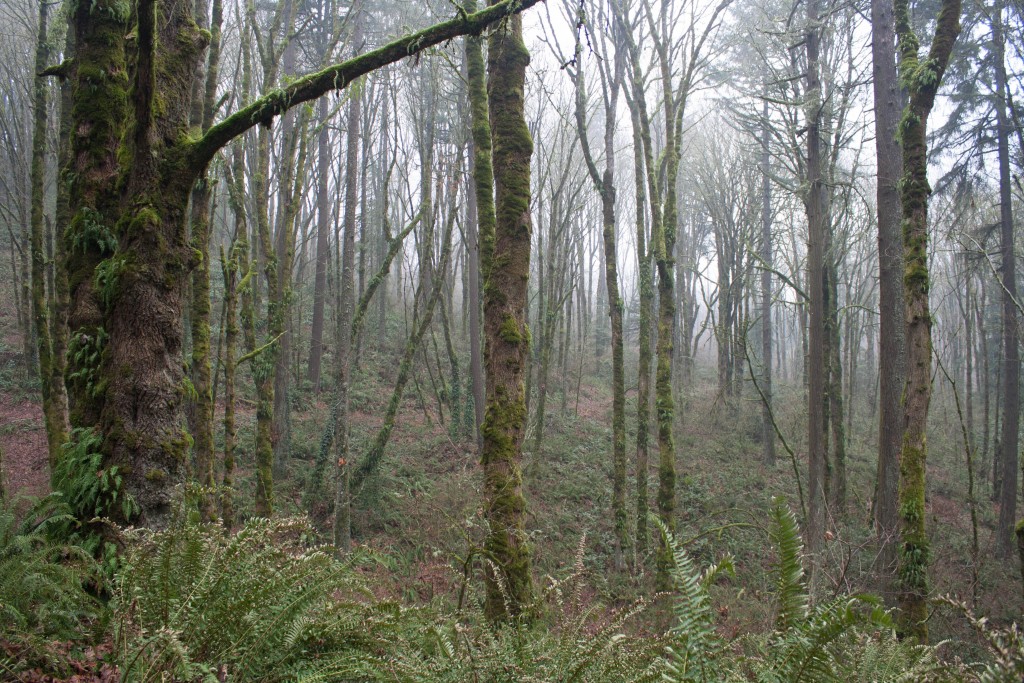 One of my pet peeves with dog owners is the ones that take their dogs hiking off leash. Not only do I think it’s dangerous for the dog, but I can’t tell you how many times we’ve been out on a trail and had some dog race up to Bella in a really aggressive way. Thankfully nothing has happened, (until now) but it’s just crappy. So we were hiking and Bella’s leash was a little on the short side, but not short enough apparently. We came across another couple with a little dog (Jack Russell mix) that WAS on a leash but a total asshole (dog owners or dog, take your pick).

We were just hiking along, Bella wasn’t too interested in the dog but the dog lunged and snarled at her baring all it’s teeth and then snapped at her. It all happened so fast, was completely unprovoked and out of the blue and I still don’t know if Bella got bitten or scratched just because it was so fast. We walked on ahead a few minutes and then pulled off to the side of the trail to look at Bella. She was shaking her head and I knew immediately she was injured in some way.

Yep. She had a slash on the side of her snout, just beside her nose (thankfully not ON her nose). It was a little raised and bleeding. We got out our first aid kit and I wiped the wound really good with antiseptic wipes. Bella kept trying to lick it. Then she’d shake her head. I did a quick look to see if she was scratched anywhere else and she wasn’t.

We were a little ways in on the trail. We debated on whether or not to just turn around and go to the vet. In the end it didn’t look like the wound was deep and the bleeding had stopped. We decided to keep hiking. Bella wasn’t acting weird in any way and seemed to still want to hike. 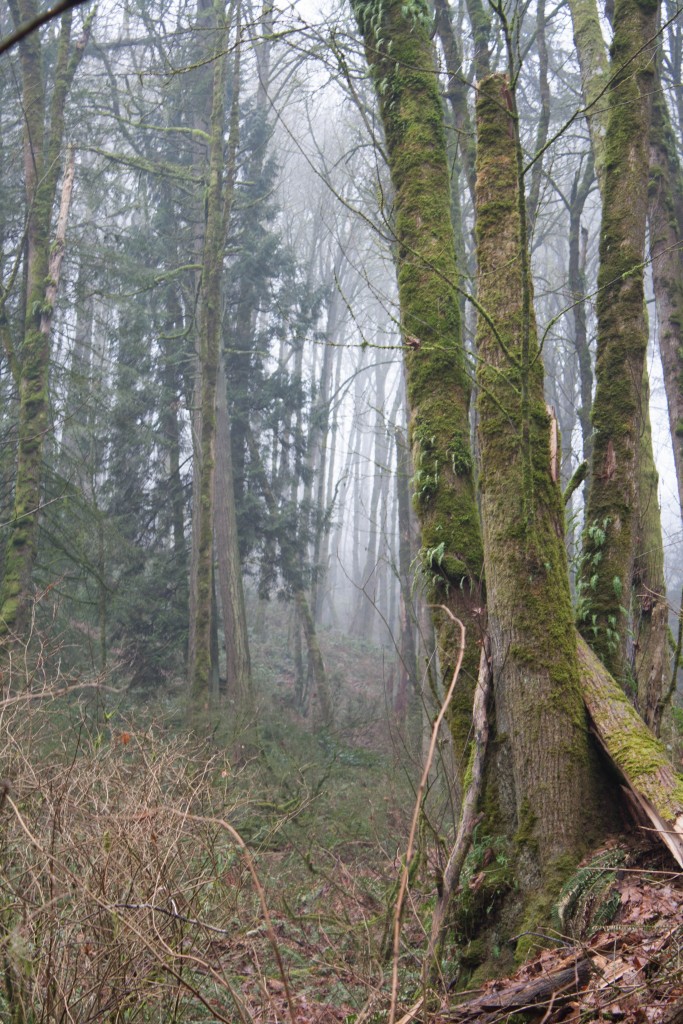 The rest of the hike was uneventful and Bella did well. She didn’t seem to notice her nose wound. I, on the other hand, spent the entire hike reliving the attack and worrying about her injury and wondering if it was going to get infected, etc etc. We eventually turned around. The trail was getting too muddy and slippery and I almost fell a few times. Plus, with the worry I just wasn’t having that much fun anymore. 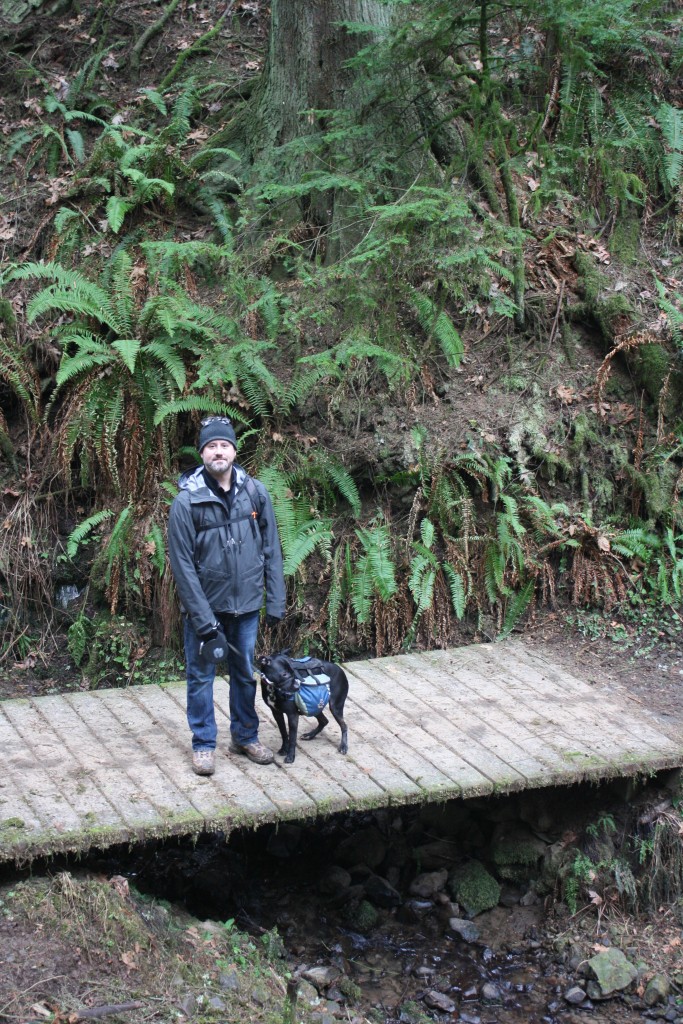 We turned back and headed back to the main trail. It didn’t take too long to get back. We hiked 4.05 miles in just under 2 hours. I burned 512 calories for the day. 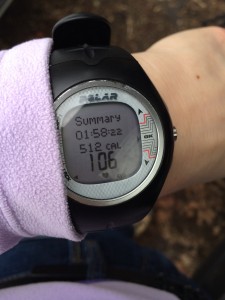 I wiped down Bella the best I could (she was caked in mud from head to toe) and then wiped the wound with another antiseptic wipe. As we drove back to Portland I ate my PBJ sandwich and then called the vet. They said to come in for a quick look so we did (except we got caught in horrible traffic everywhere). Our 2 hour hike turned into a 4 hour event with traffic and the vet. SIGH. The good news: Bella is fine. They looked at the wound and it was superficial. They said don’t do anything to it, no antibiotics were needed and just watch for signs of infection.

We went home to get ready for some friends to come over for dinner and games. We’d planned it awhile ago and I was really looking forward to it and didn’t want to cancel. Michael made a half batch of his famous mac n’ cheese and he also did up a small ham. I gave Miss Dirty Girl her 3rd bath of the week (I think it’s a record!) and then our friends arrived! 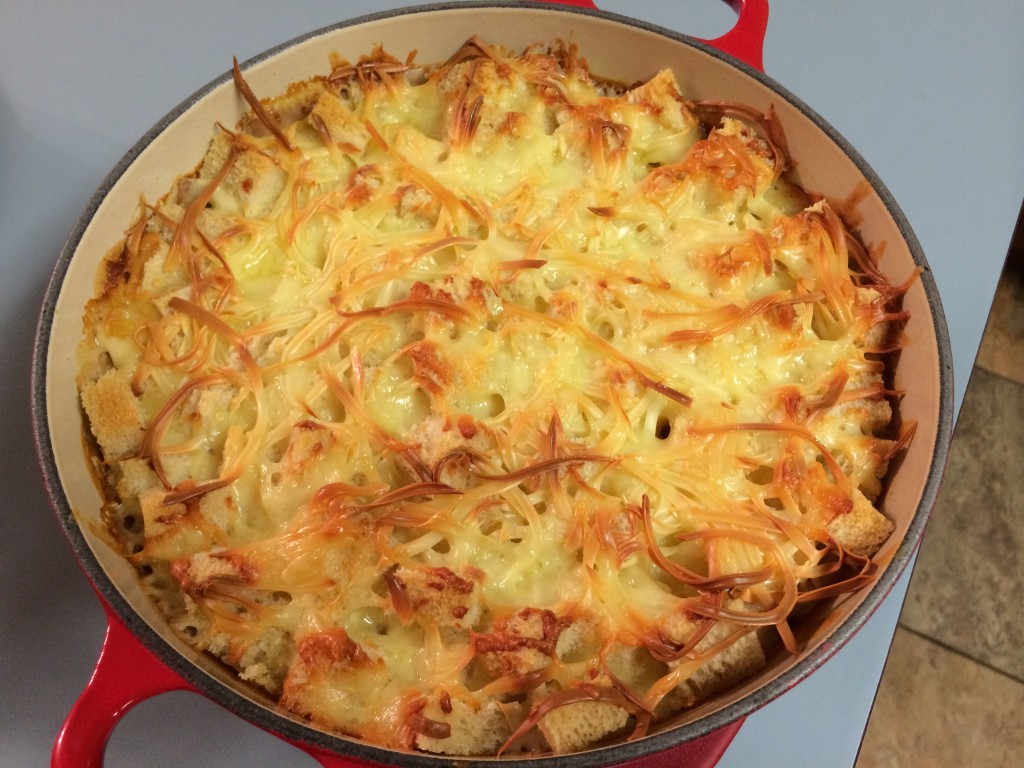 Mac n’ cheese and ham for dinner! It was DELICIOUS! I was especially grateful for the comfort food aspect of it after an active and trying day. It was a hit with our friends, too. 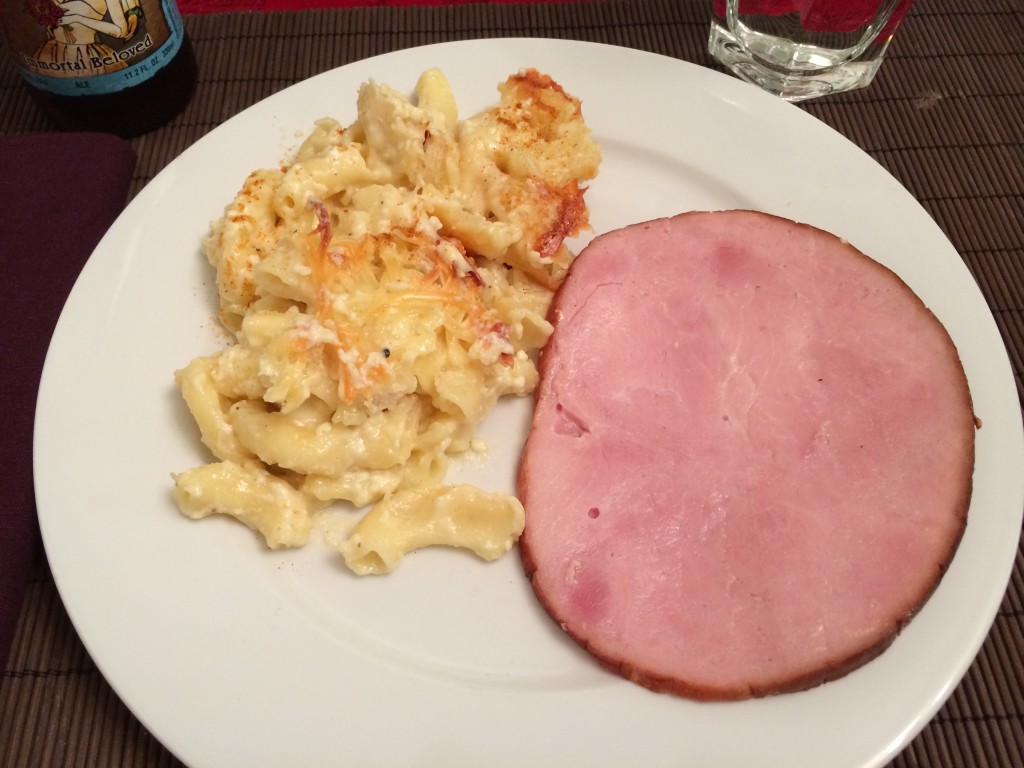 I decided to have beer with dinner. It actually went perfectly with the food. I had a normal sized bottle of a hefeweisen and then a large bottle of a double IPA I found awhile ago and had in my fridge (since before the wedding!): 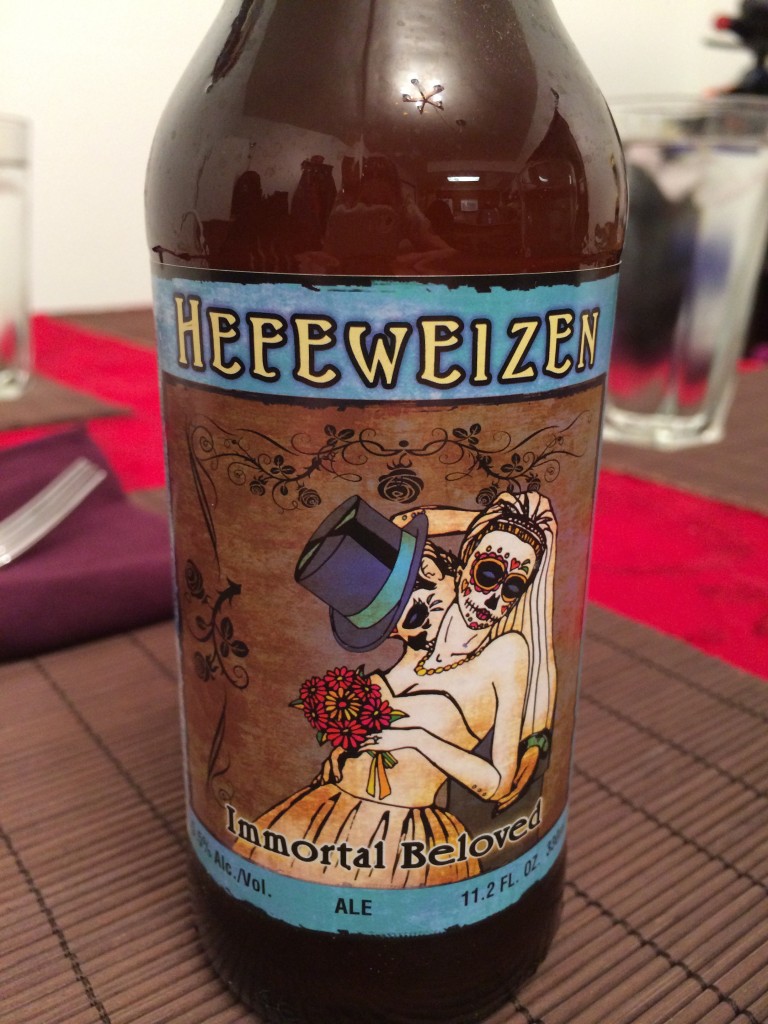 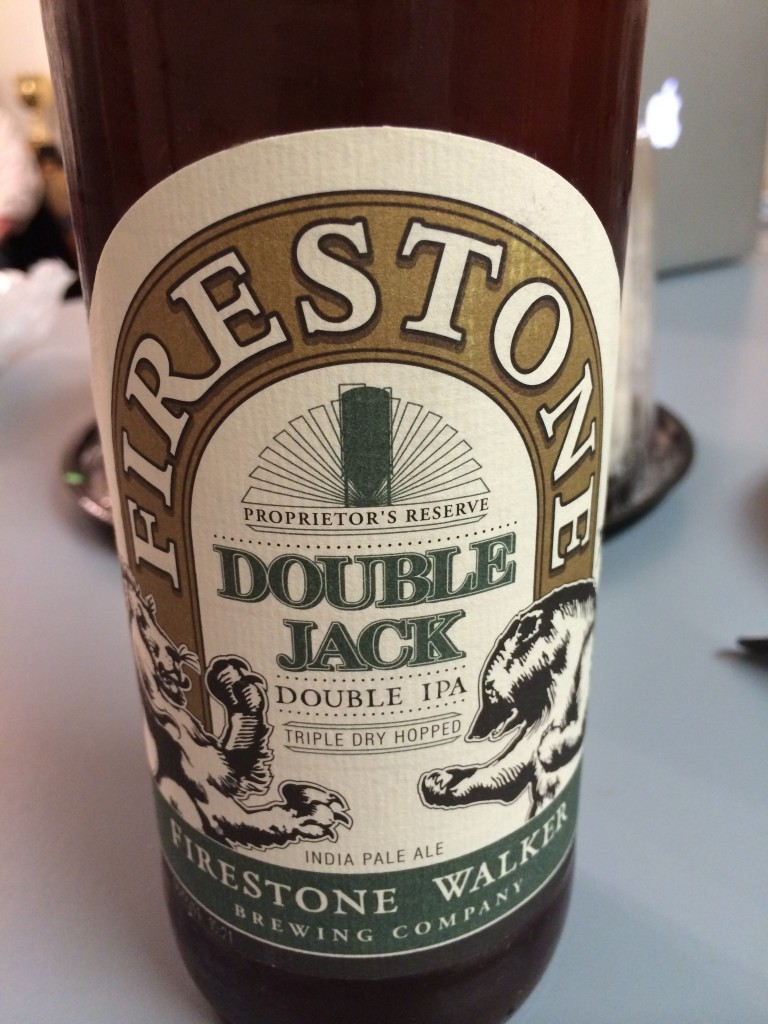 The game I’d ordered after Christmas finally arrived– Ticket to Ride Europe version! I was SO excited to play it! Before our friends came over I read through the instructions–it claimed it took 5 minutes to learn it. Not so much. After an hour I finally googled it and found an 11 minute video explaining it. We watched that and then started to do a practice game when our friends arrived. After dinner we all watched the video again and then started to play. 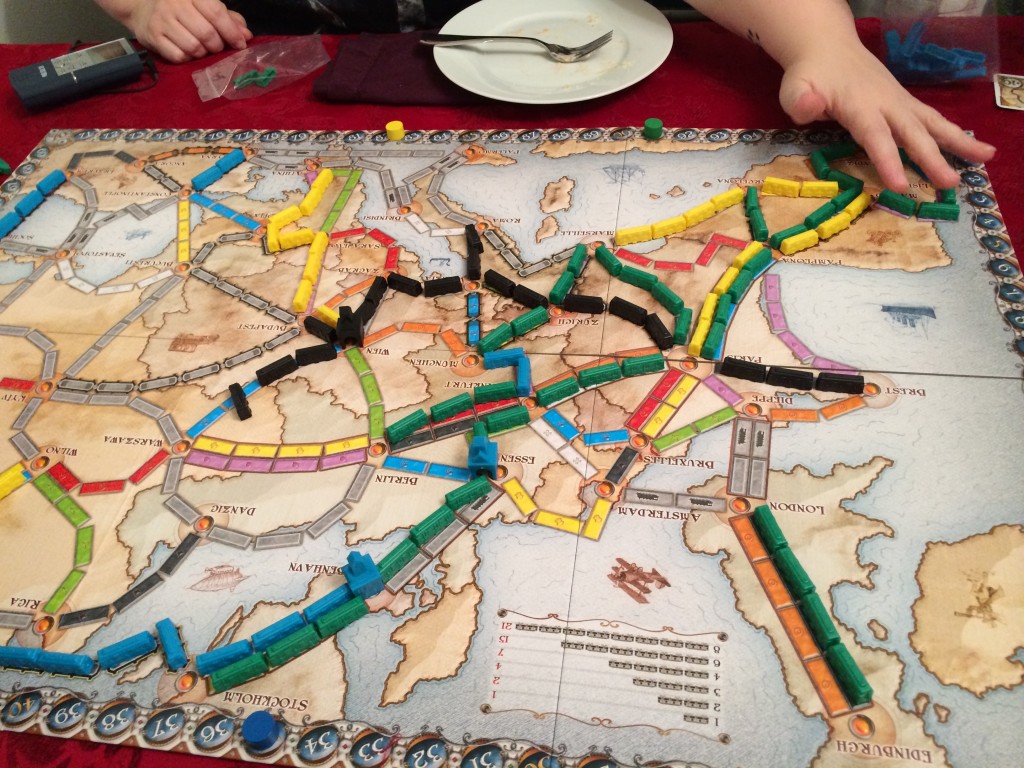 The video helped a lot and the game was pretty easy once we started playing. I can definitely see where strategy would help move the game along faster. We need to practice this one!

Our friends Dawni and Chad brought dessert from a Russian bakery near their place. She said nothing is in English and you never know what you are buying. We still don’t know what she brought over but it was amazing! The cake part had the consistency and flavor of sponge cake–moist and fluffy. 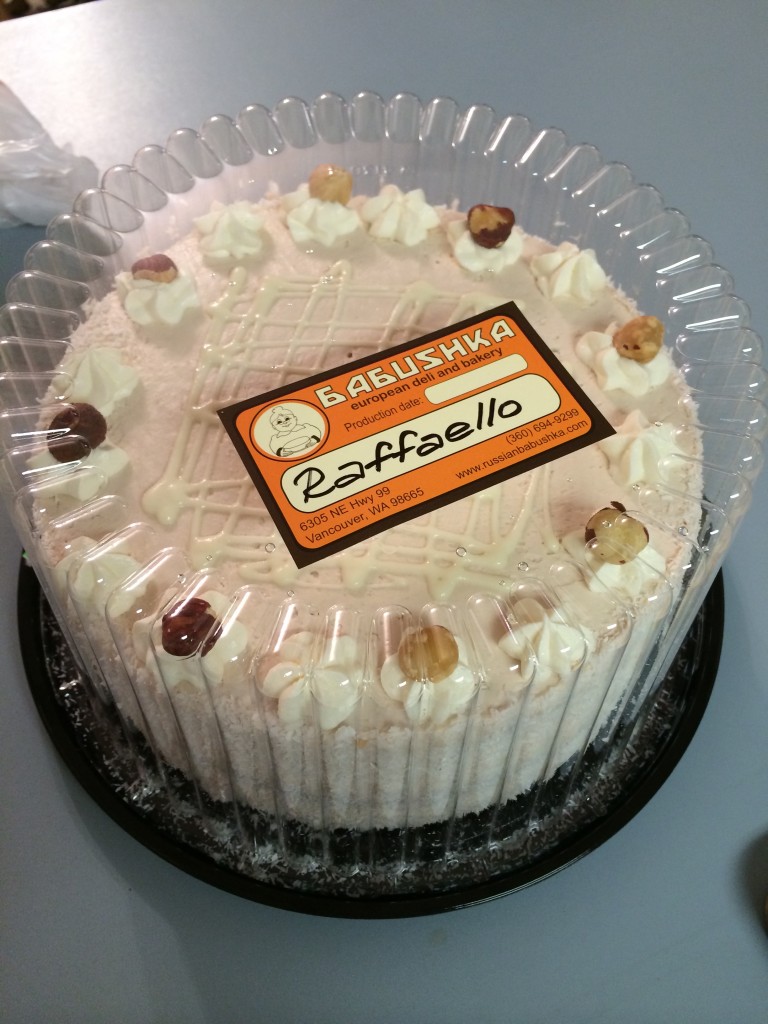 The frosting was not sweet at all and the flavors were all so subtle. Dawni said that their cakes never feel super sweet or like there’s a ton of sugar in them and I get it. It tasted healthier in someway. There were hazelnuts on top and I think in the center of the cake, ground really fine. The outside had unsweetened coconut flakes. It was so delicious and I’m not really a cake fan. I was good because it wasn’t overly sweet. I need to find a Russian bakery near our place! 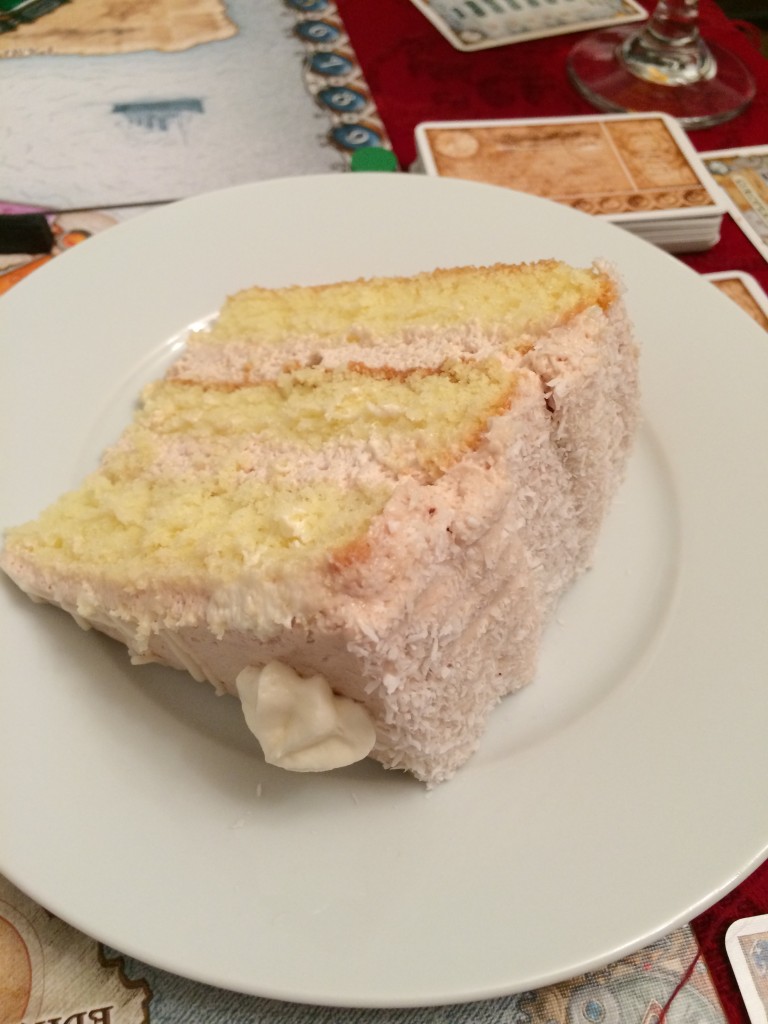 We ended up playing until midnight and then sat around talking for almost another hour. While we played the game we talked and Bella laid on her bed next to us. She was one tired pup! By the end of the evening I was, too. 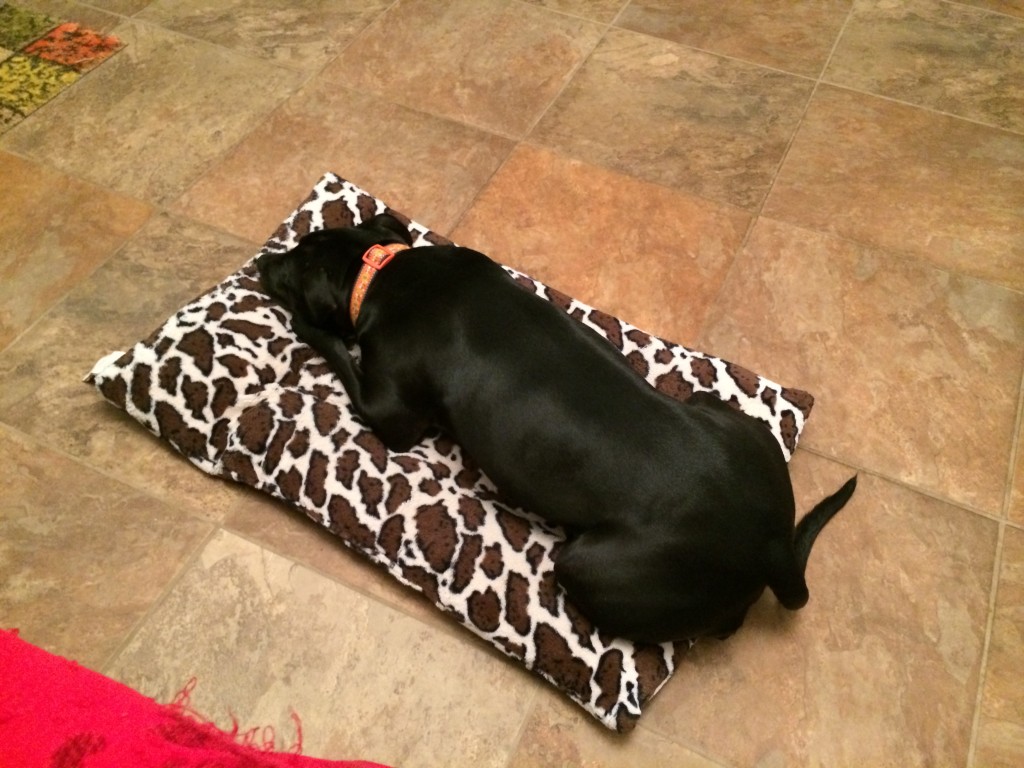 Despite the not-so-great hiking experience, it was a pretty good day and I’m glad we finally got to play my new game. I can’t wait to play it again!