We had a busy and productive weekend! Michael’s dad and stepmom came to visit from Texas. We all went out to dinner Friday night at Wayfinder. Since Michael’s dad works in the beer business, we try and find good breweries for him to check out when he visits. The beer at Wayfinder is really good. 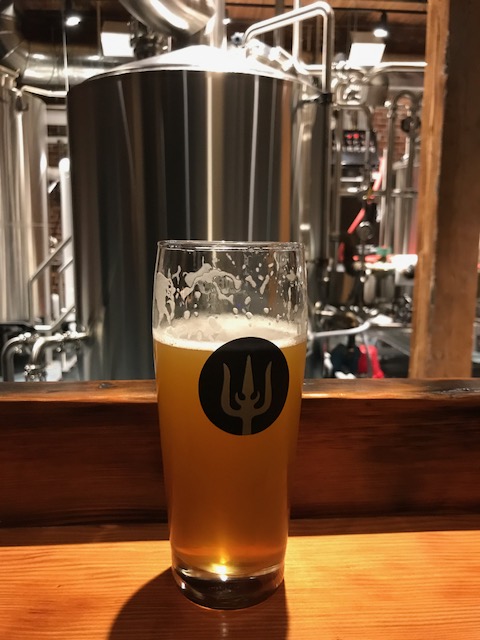 The wait for a table wasn’t too bad for a Friday night, but the place was pretty packed. We checked out the brewery area, had beers, let Logan run around a bit and then got a table. 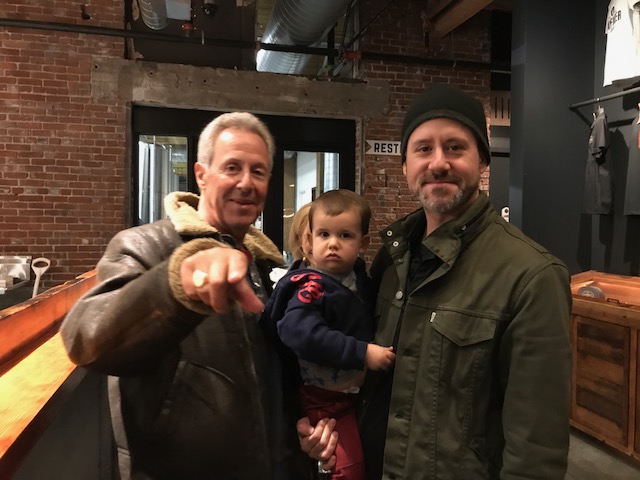 We shared an appetizer of the fried cauliflower with buffalo sauce and blue cheese. It was SO amazing! I seriously could have eaten that whole plate by myself. It was super spicy and so delicious. Big hit. We also got an appetizer of shaved Brussels Sprouts that were just ok. 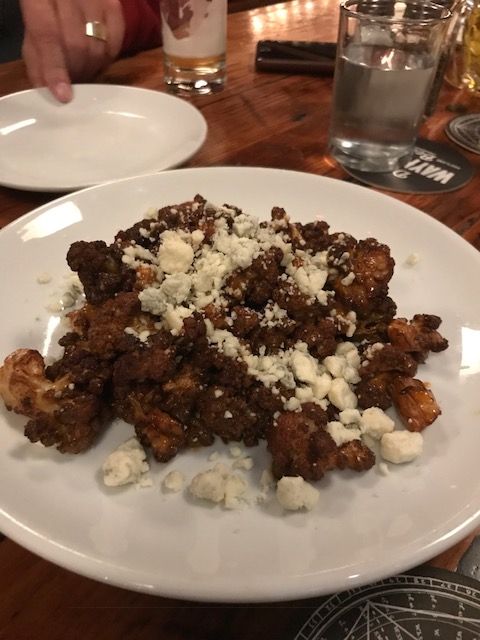 For my entree I got a salad. I didn’t love my salad, but it was alright.

The next morning we all went to a new (to us) breakfast place in Oregon City, Yvonne’s. It was a really cute, small, place with good reviews. It was pretty busy when we got there but we got a table almost immediately, which is unheard of in Portland. 😛 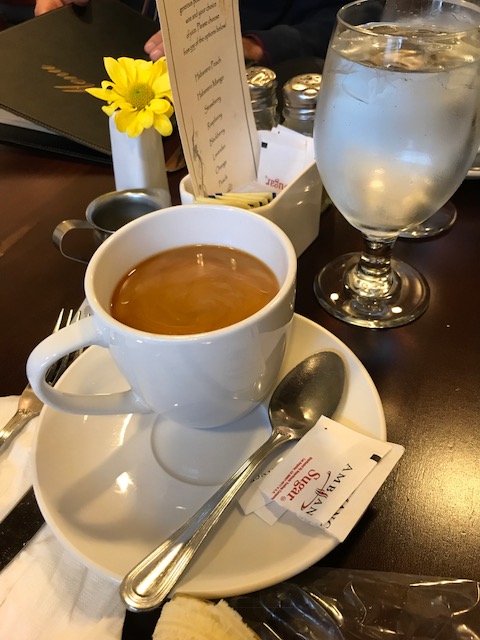 I got the breakfast sandwich. It came on a homemade buttermilk biscuit and it was really yummy. 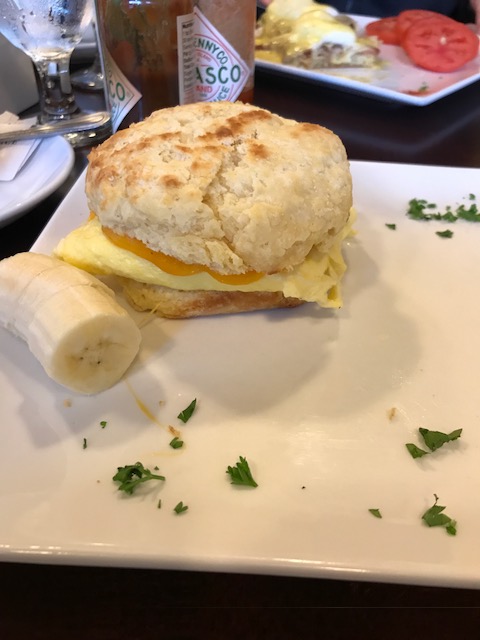 After breakfast we tried to go see Santa. It turned out to be a debacle, unfortunately. Last year we went to the 7 Dees Nursery for their “Reindeer Magic” event. I bought a “fast pass” last year and it was the best thing ever! For $5 we didn’t have to stand in a super long line to see Santa and got pictures. It was great. So this year we wanted to do it again. I marked my calendars and looked on Facebook for the announcement of the fast pass tickets (they sold out really fast last year). I got a ticket and we planned on going to meet Santa.

Well, we got there and it was a total shit-show. There wasn’t much parking in Lake Oswego (new location) so people were parking all over the place and then walking on a really busy street to get there (not safe) because there wasn’t a better way to do it.

We arrived 20 minutes after they opened and there was already a line about 2 hours long. We got to the entrance and apparently they were charging admission for each person (annoying, but whatever), so the four of us fork over more money to get in and I ask where the line is for the fast pass. Apparently they aren’t doing that this year! I was SO livid. Nowhere on the website did it say they got rid of the fast pass option. Had I known that, I wouldn’t have bought the ticket.

We stand in line, in the pouring rain (they didn’t set up tents for people standing in the rain outside!!!), pissed off. After about 10 minutes of the line not even moving a little bit, I go inside to get some kind of idea of how long the wait was and it was seriously going to be 2 hours–in the cold, rain. Logan was getting fussy and squirmy and didn’t want to be held. So we got our money back and left furious.

Other people in line were angry too. I talked to two friends who were there later and one said they waited 90 minutes to see Santa (her kids were older, so they couldn’t leave after she’d hyped up seeing Santa) and another friend said that they waited over an hour and decided to just leave. What a rip off! Lots of unhappy customers, lots of grumpy, wet kids. What a mess!

Do I need to even say how disappointed and angry I am? 😛 Anyways, we made an appointment at the mall to see Santa in 2 weeks–no LINE! Screw that other place! 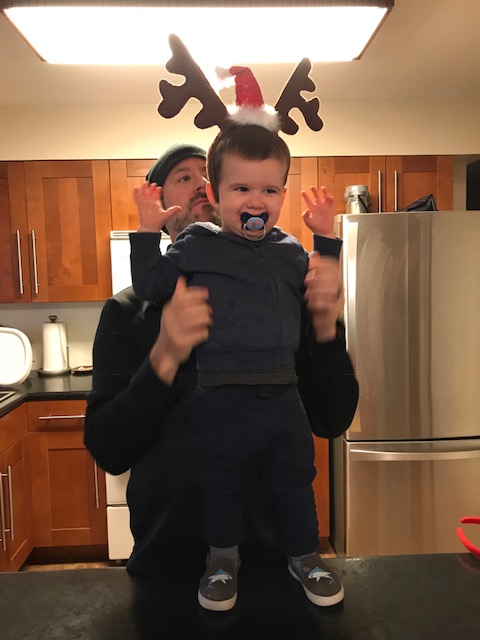 The day felt like an entire bust. We got back to the house and dried off. Michael’s dad and stepmom left for their weekend getaway to Bend, I went to the gym, Logan took a nap. I was really frustrated with how the day went and I was disappointed by such a bad experience at 7 Dees.

But, we managed to salvage the night. After dinner we put Logan to bed and Michael and I started a new tradition for Christmas. We drank eggnog, listened to Christmas records, ate donut holes, and wrapped presents together! It was so much fun and we got everything wrapped. 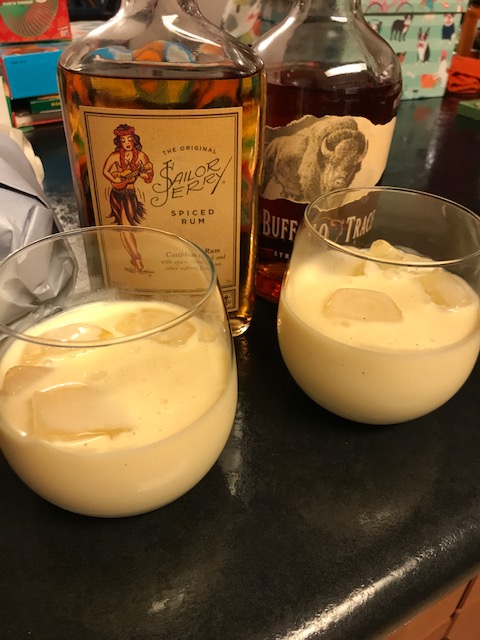 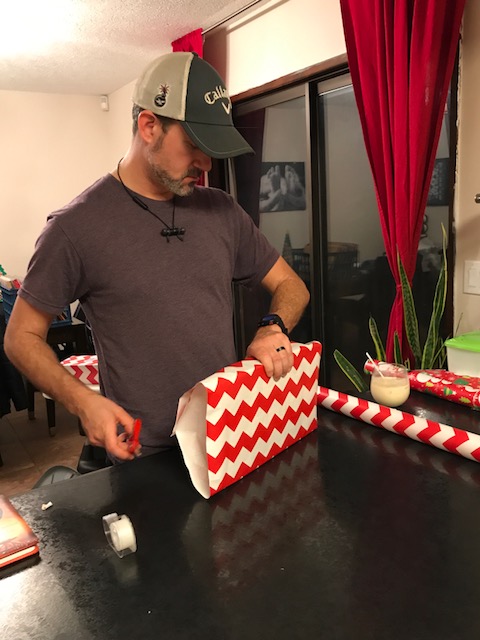 Sunday morning Logan slept in super late (I wish I had!) so I got up and got more stuff done. Sorting through things to donate to the Vietnam Veterans, and then I got all our Christmas cards done and ready to send out. It was a very productive weekend. 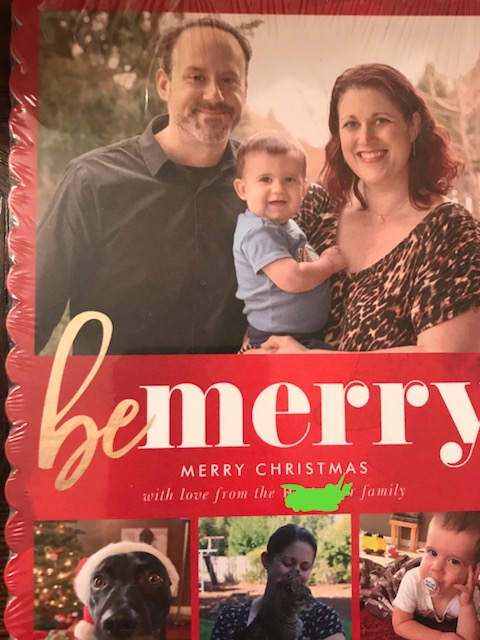 I ordered the cards from a Black Friday sale on Printerpix and they turned out really nice.

Anyways, that was our weekend. Hope you had a good one!