Michael was off in Seattle doing boy things and so Bell and I were flying solo for a little girl’s weekend. On Saturday I had plans to go for a mini road trip and picnic lunch with my friend Erika.

But first, I went to the gym for a quickie weight workout. Erika and I weren’t planning on doing any hiking or anything and I wanted to get something in for the day. Afterward, I cleaned up and got everything ready for the picnic and then Erika arrived. 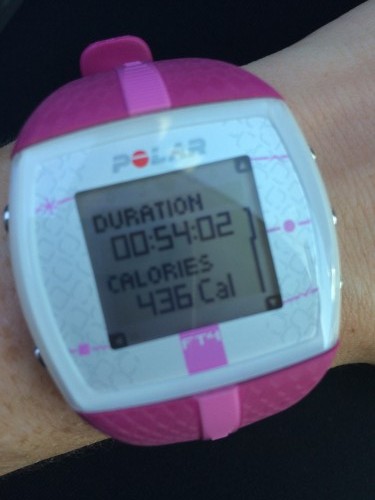 When we discussed getting together for the day we talked about a few options. The first was doing the Fruit Loop in Hood River. It’s a bunch of country stores, fruit stands and farms in Hood River. Michael and I did part of it a few years ago and I really liked the idea of checking it out again but thankfully Erika checked it out online and saw that they don’t want dogs to visit (since a lot of them have farms with animals). Good to know! So Erika suggested we check out Lost Lake. 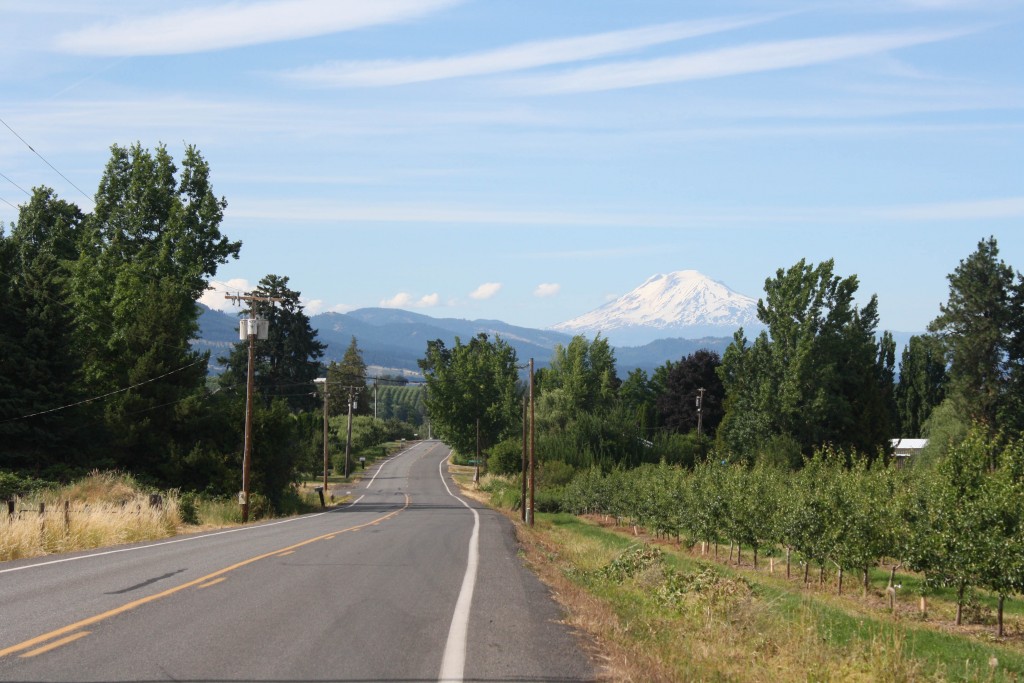 I’d heard of Lost Lake but didn’t know anything about it and hadn’t been before (Erika camped there as a kid). We picked up lunch from a grocery store deli (I got Broccoli Salad, Potato Salad and some Goldfish crackers, Erika got a sandwich) and hit the road! It was a really nice drive out to Hood River. It’s such a gorgeous, picturesque area of Oregon. 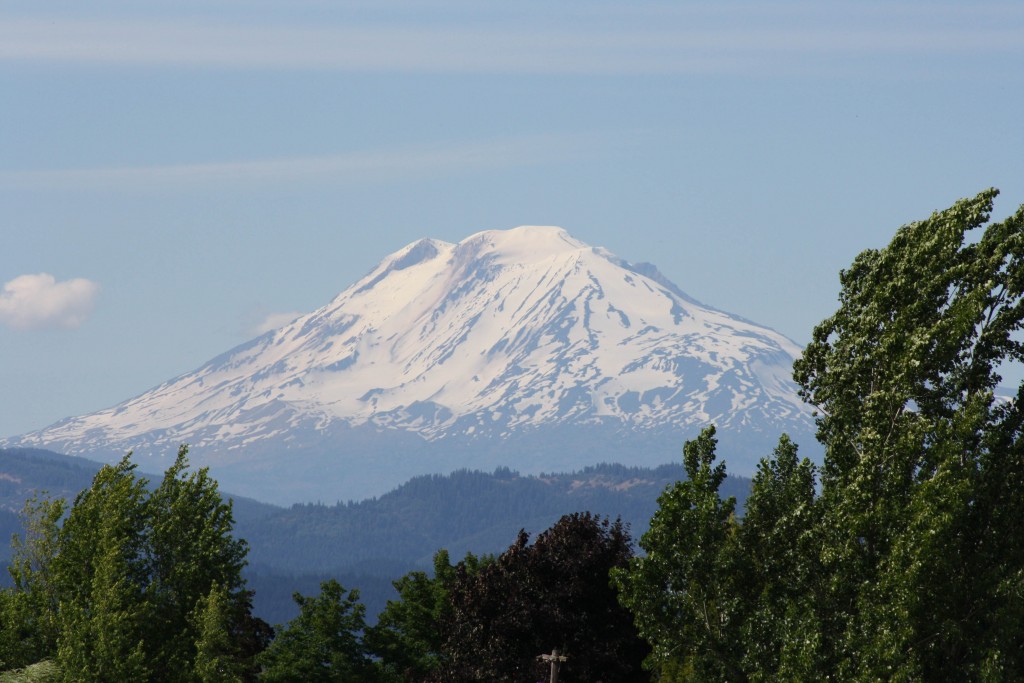 We drove past all my favorite wineries and were surrounded by several mountains. The sun was out, it was warm but not uncomfortably hot and we had the windows down and the music up.

The road to Lost Lake was off the Fruit Loop through the forest, some clear-cutting (sad) and the road was windy and climbed up quite a bit. The drive was just under 2 hours from my place and in a very remote and romantic neck of the woods. We got to the campground and it took awhile to get a parking spot. They had a lot of people directing traffic and trying to help people find places to park. It was a popular place!

We finally found a spot and then grabbed the cooler and walked down to the lake to have a picnic. There were day use areas but since we’d gotten there so late in the day it was pretty crowded already. We walked along the shore and found a little spot to have our lunch and listened to the water lapping on the shore. 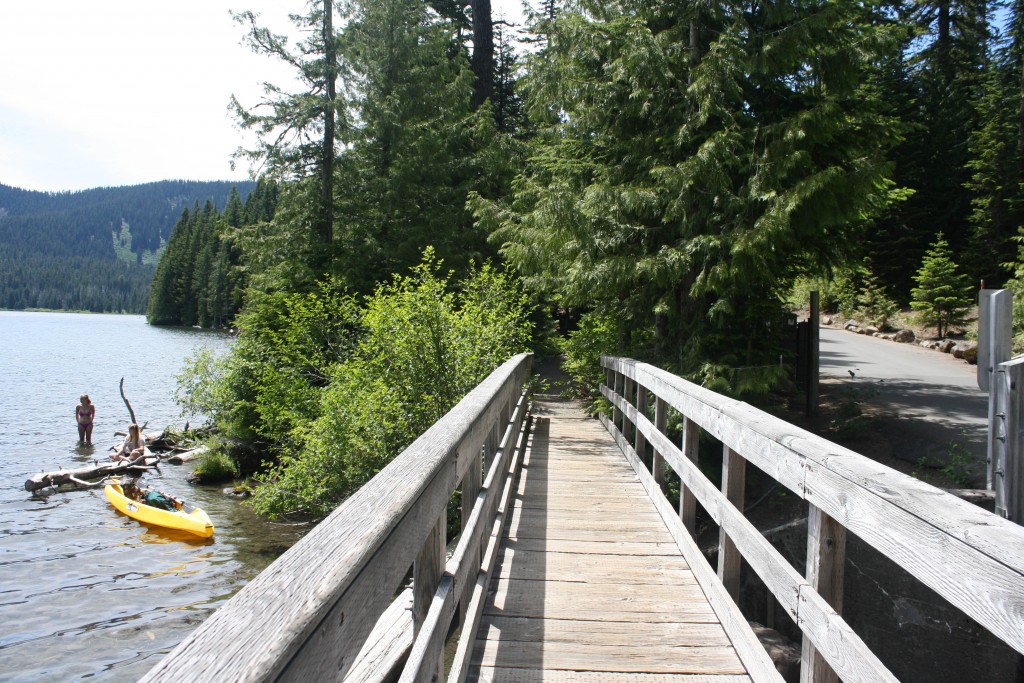 After lunch we decided to walk around the lake. According to the website it was only 3 miles around the whole thing and very easy. We walked back to the car to drop off the cooler and kind of got a little teeny bit lost. LOL So we ended up walking around the camping loops of the park for awhile before we finally got back to the car! Oh well. We took the scenic route. 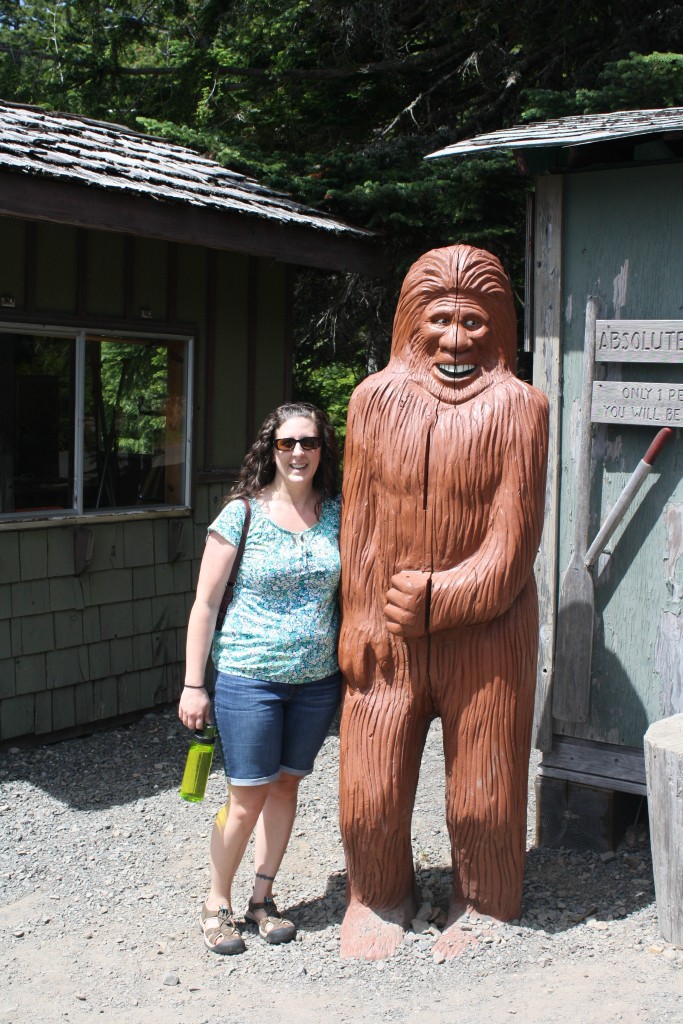 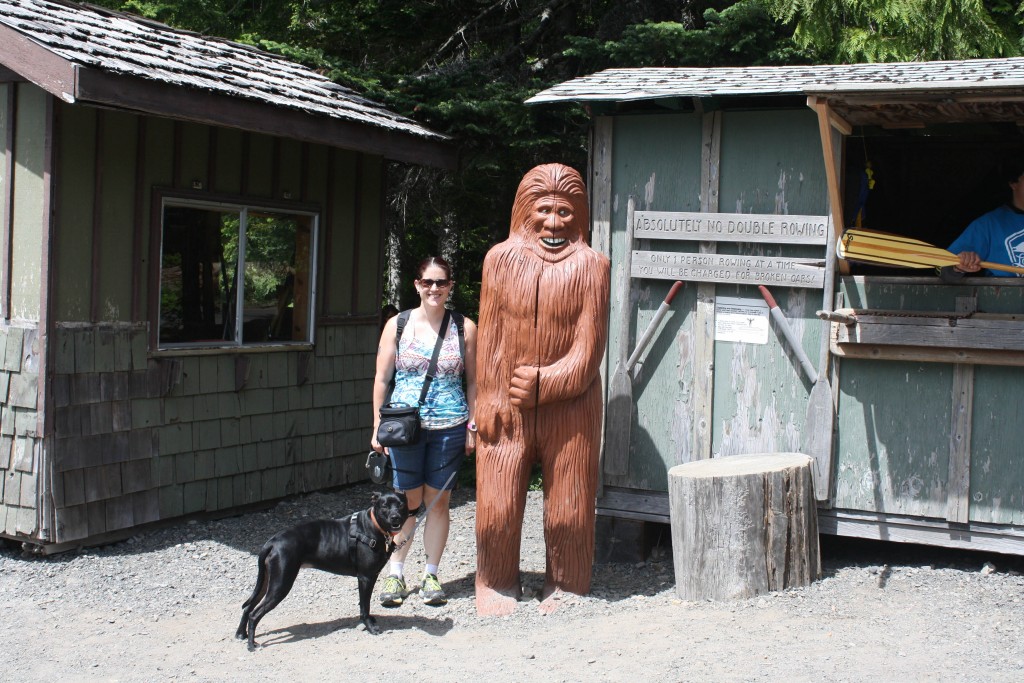 We grabbed our backpacks with water and then set out to walk the trail around the lake. According to the website, the Lakeshore Trail was 3.2 miles (it turned out to be a lot longer!). I was just about to comment that it was odd we hadn’t seen the mountain at the Lake when we turned a corner and saw this: 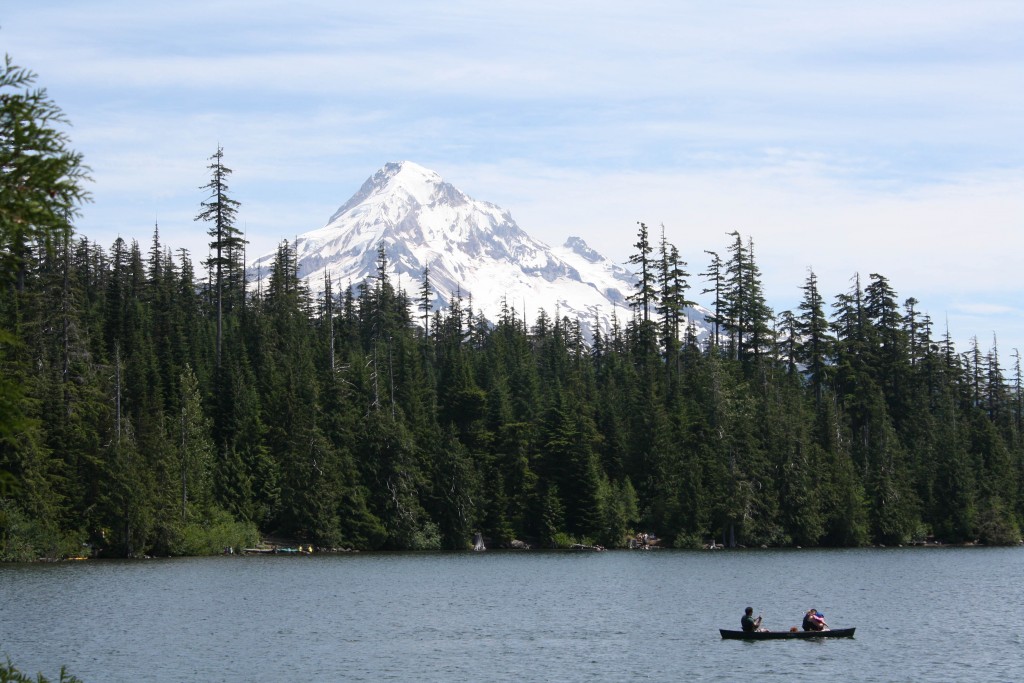 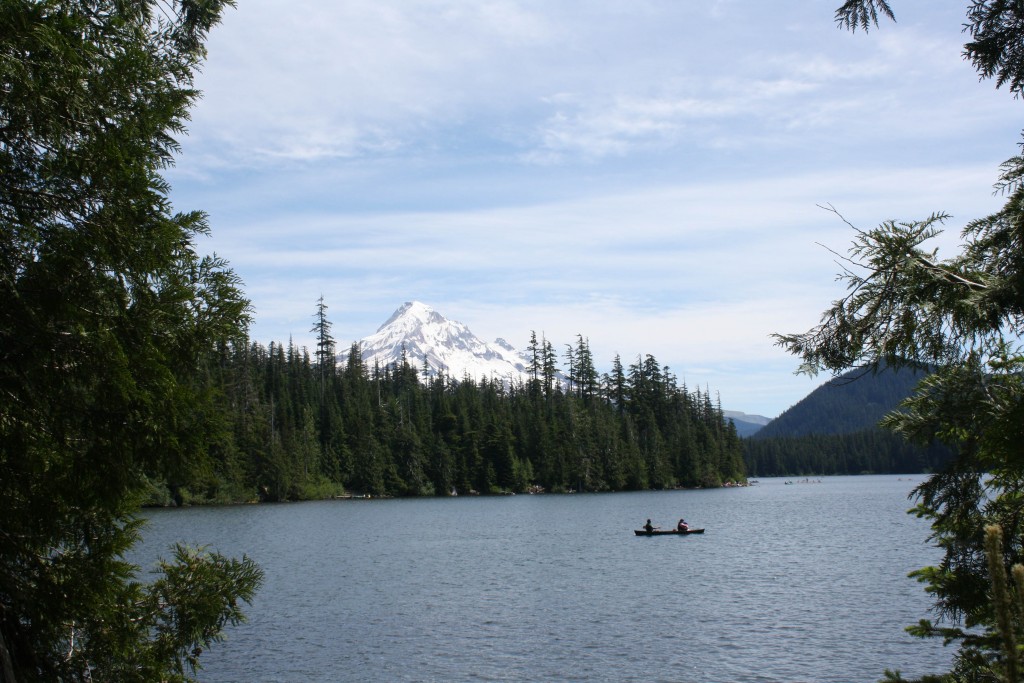 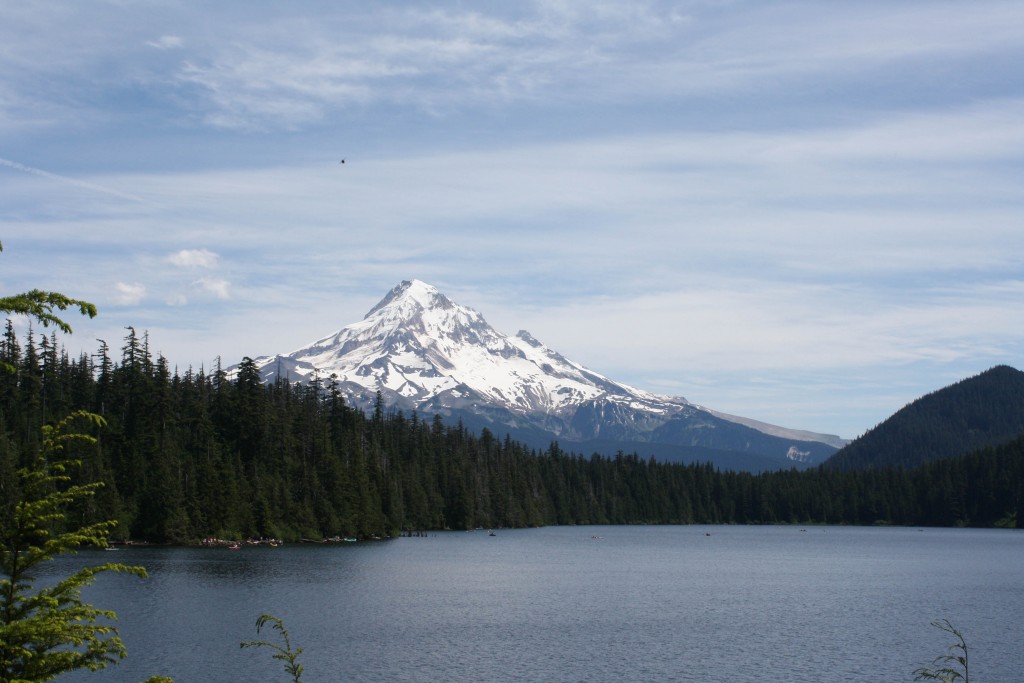 The lake had a ton of kayakers and swimmers and there were families fishing. Lots of kids were playing near the dock and families were having BBQ’s. It was cool how many little nooks of picnic areas there were along the shore, hidden in the trees. I think the secret is to get there early in the day and grab one of those great little picnic spots and just spend the whole day! 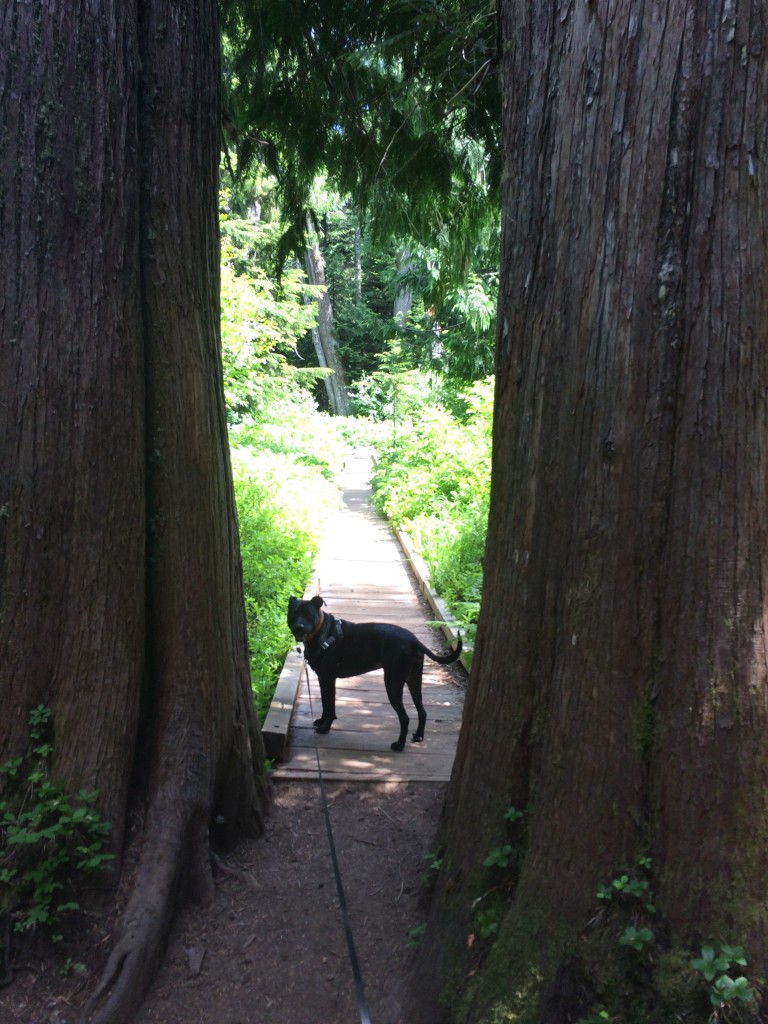 The trail was so nice! It was VERY easy. Flat and sometimes there was a boardwalk and there were parts of the lake that were completely secluded. 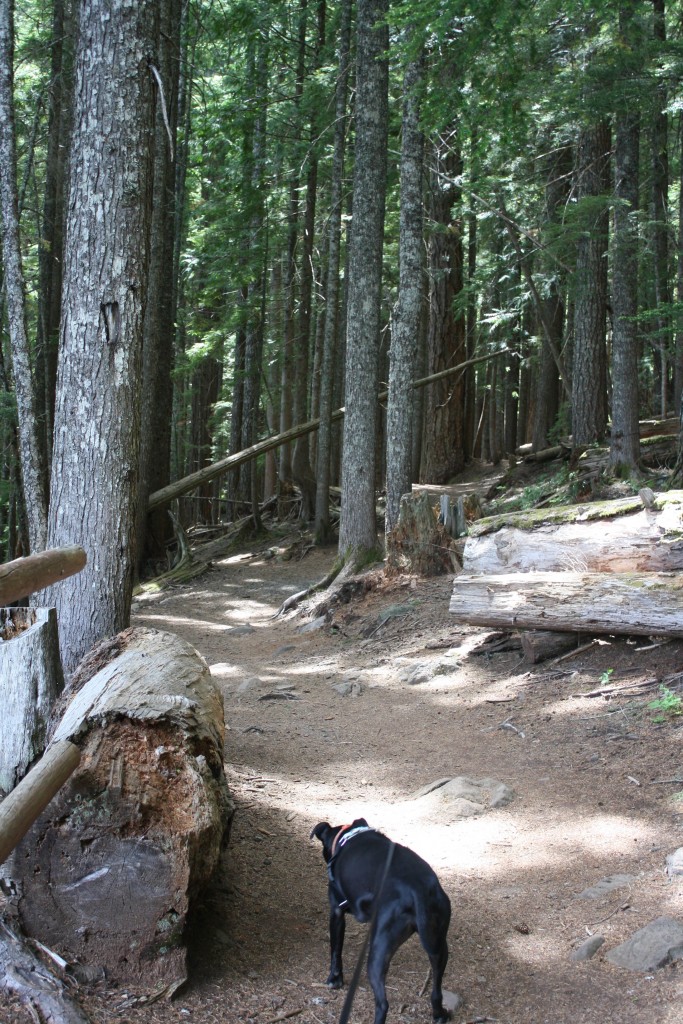 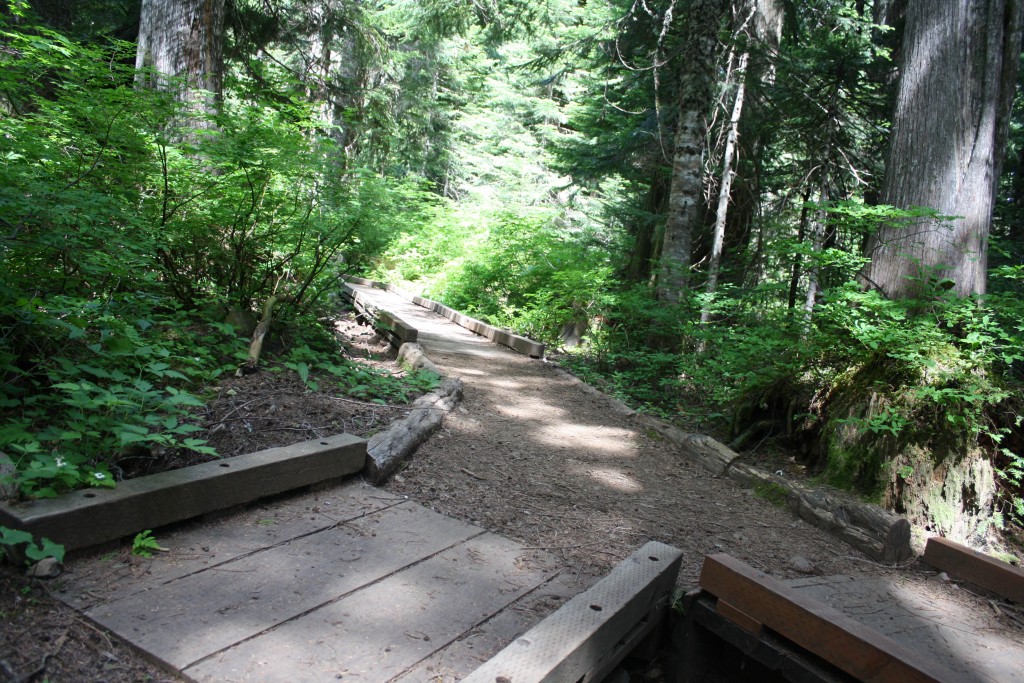 Bella was doing a great job. It was pretty crowded and there were lots of dogs on the trail but she never barked once. She was loving the woods and the trail. It was such a nice and peaceful walk along the lake. Sometimes you couldn’t see the lake but then you’d turn the corner and it would be a breathtaking view. 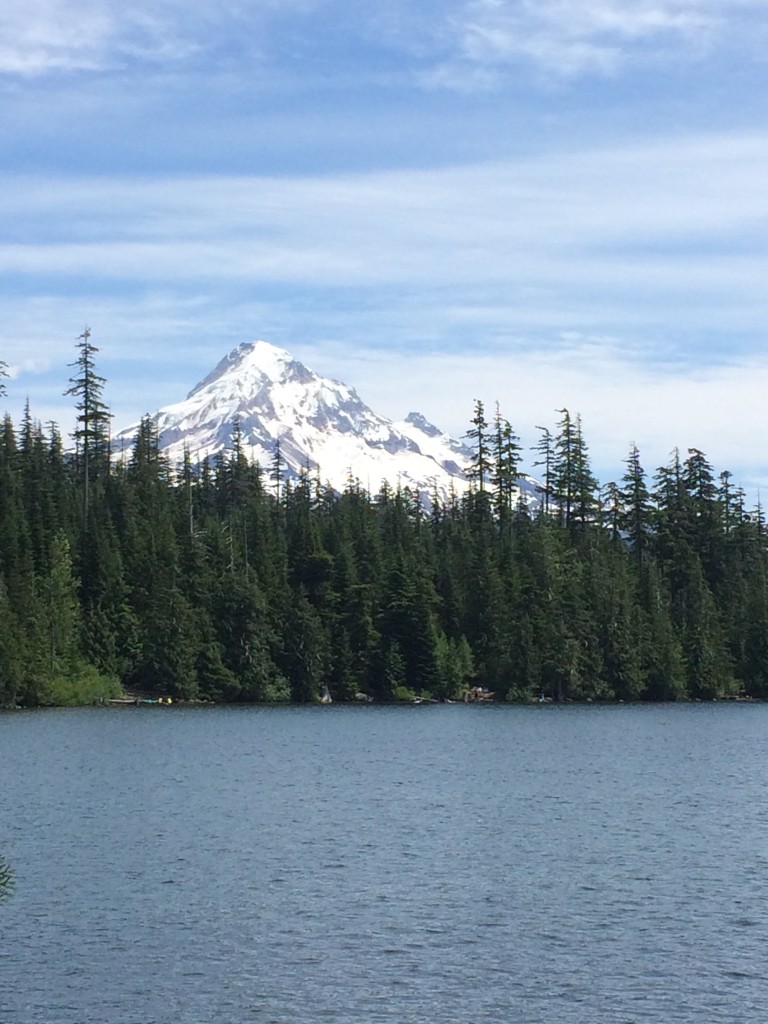 We got to the other side of the lake and found a little dock that was empty. We decided to sit down and relax for a little bit. Erika had some chocolate chip cookies and we lounged in the sunshine having a snack and enjoying the view. 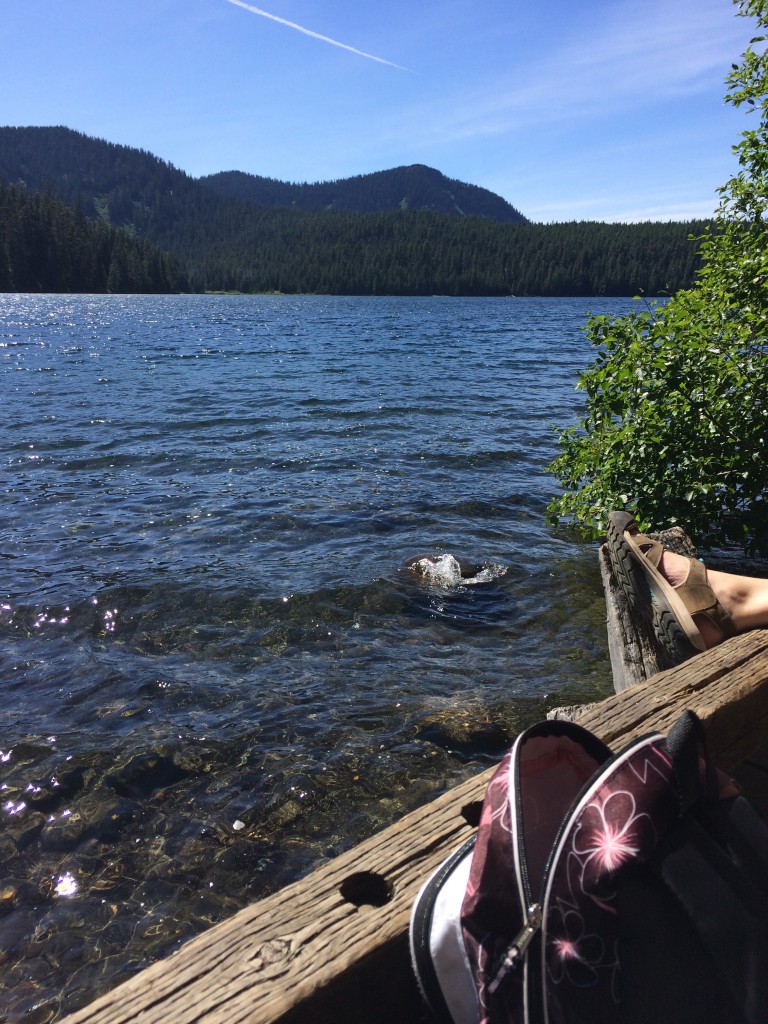 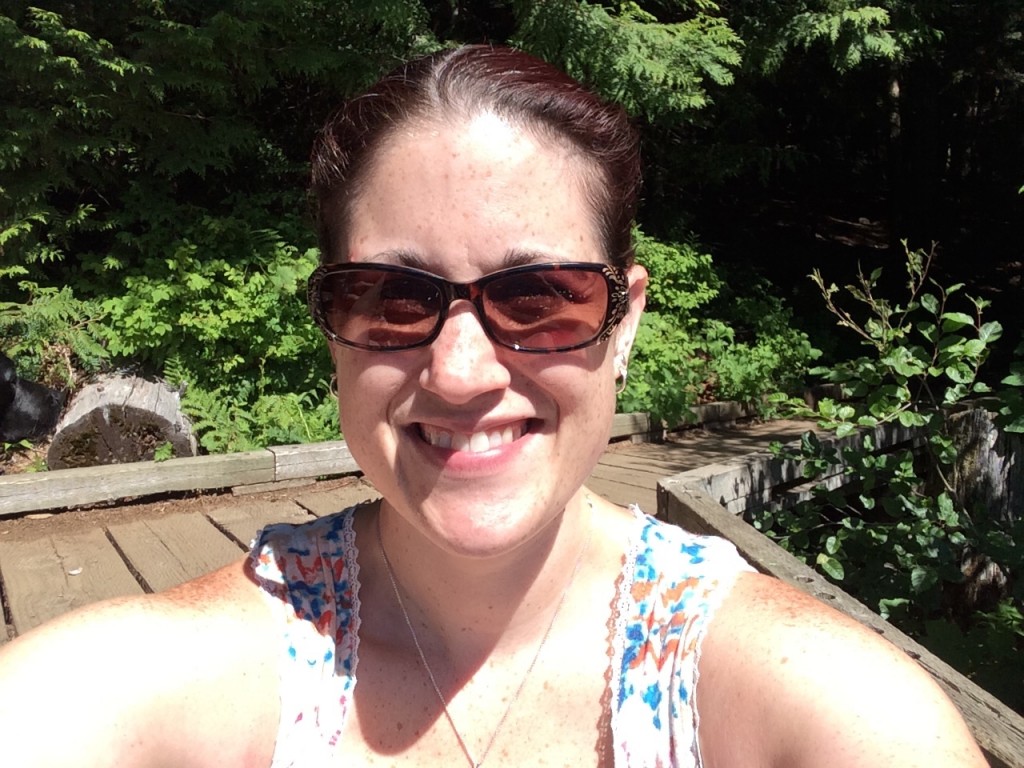 It was the perfect day and a great view! I commented that we needed hammocks. Next time bringing a camping chair and a book and spending some time next to the lake! After the break we continued up the trail a little bit and then got back to the parking lot. 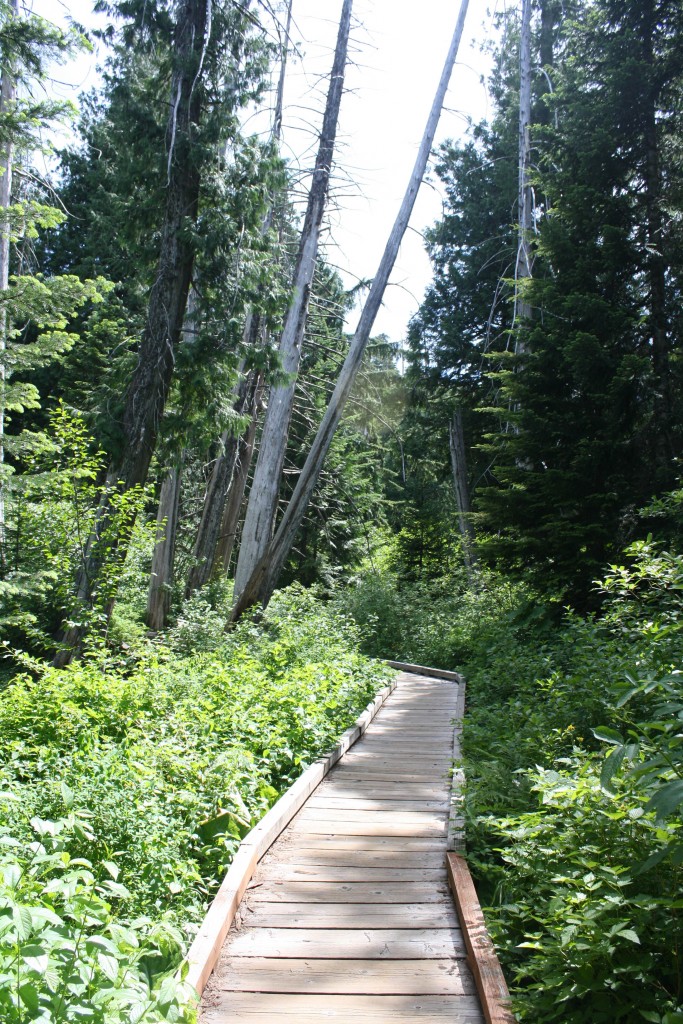 Like I said, it was a little bit longer of a walk than the website said, about 4 miles. But it was a very easy 4 miles. I was actually kind of surprised at how many calories I burned on our walk considering my heart rate never got over 110 during the whole walk. 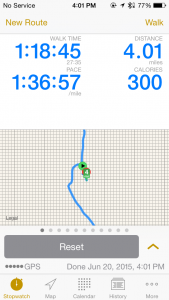 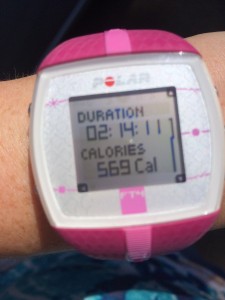 What a great way to spend the afternoon! We headed back towards Portland and made a quick stop at a fruit stand to get some fresh fruit. Erika got some blueberries and I got cherries and raspberries. 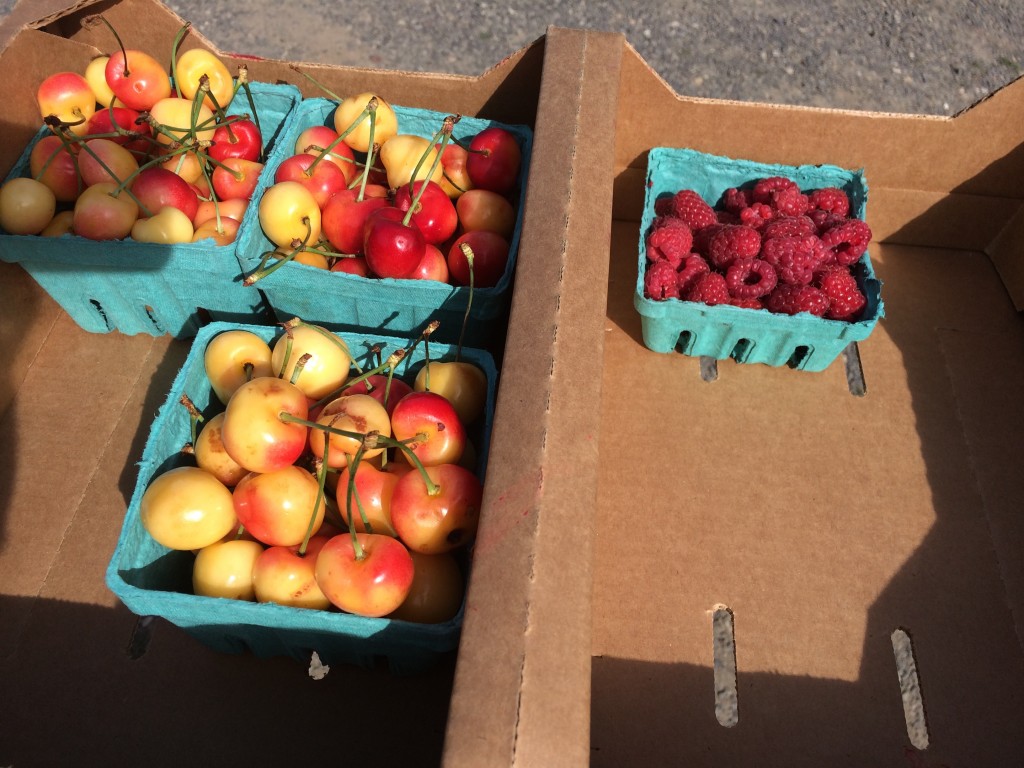 It was a bit of a slow drive back into town but so pretty it was hard to feel impatient. When I got home I made a veggie burger and some steamed broccoli for dinner (and might have eaten all of those raspberries while I cooked) and relaxed with some Netflix while I ate. Bella was zonked out on the couch. 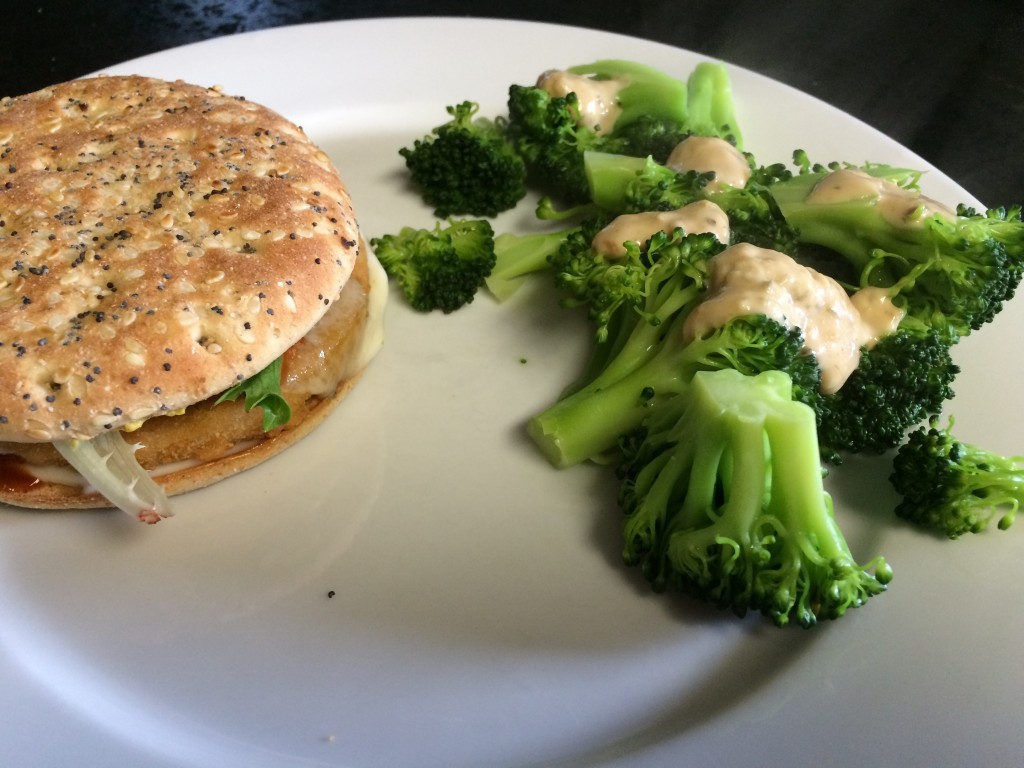 I finished watching “Bloodlines” on Netflix. It’s a really good show. It’s a little slow to start. I know a few people who say they tried to watch it and gave up but give it a few episodes. By episode 3 or 4 I was hooked. Episode 11-13 was super good! On the edge of your seat good. I hope they make a second season. Then I started watching “Royal Pains” on Netflix. Totally a guilty pleasure show. It’s goofy and trashy but kind of entertaining. 🙂

It was a fabulous weekend! Finished up with a run on Sunday, lots of yard work and playing with Bella in the sunshine.