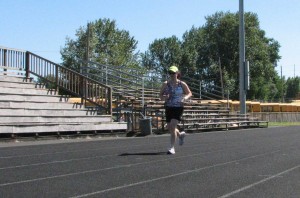 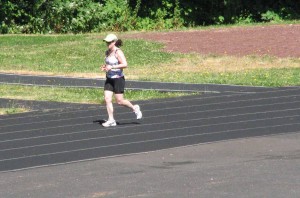 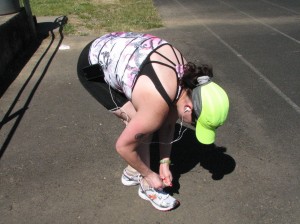 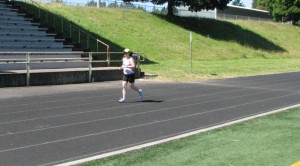 Here are a few pictures from my first run, back in October. The Portland’s Run Like Hell 5k. You can sort of see my head in the middle of the crowd. I have on a light blue sweatband. My stats: 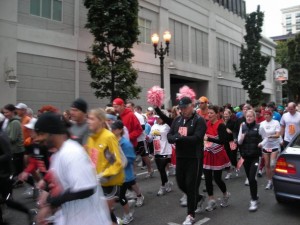 My first ever race was the Run Like Hell 5k. I had no idea what to expect, or if I could even do it! I tried to research how to train, what to eat before the race, and what to expect afterwards. But really, nothing could prepare me for it like just doing it!

I trained for a few months by simply running. I wanted to build up my confidence and stamina. I started running on the Portland Esplanade at the Waterfront during lunches. The Portland Esplanade is about 3 miles total. I was able to do the 3 miles in about 45 minutes the first time I tried it. I didn’t get discouraged, however, because it was a building process.

The first time I was able to run the entire 3 mile loop without stopping or walking was an exciting day! I kept scanning my body as I ran, thinking: “Do I really need to walk? Or can I keep going?” and “Is my breathing ok?” I told myself that I’d just run a little further; I’d run to that next light post; and then all of a sudden I realized I was almost done! That gave me the extra burst of energy to keep going. And I did it. I felt so proud to run the whole 3 miles without stopping. And I knew that I would be ok for the upcoming 5k.

Then I go the flu. Months of training and working hard on building my stamina was immediately put on hold. I was bed-ridden for a week with the nastiest flu I’ve ever had. It could have been H1N1 but I didn’t go to the doctor to get tested. Either way, I was not exercising. I could barely get myself to the bathroom.

Day 4 of the flu was my 5th day of not exercising. I saw all my training going down the drain. The stress probably didn’t help me heal any faster, either. I tried to ignore the stress of not running because honestly, I had no energy anyways. I wondered how it would effect my run time. I wondered if I would even be able to finish the race!

My boyfriend Michael said the sweetest words anyone has ever said to me….When I was sweating in bed with a fever and headache, he said if I was still sick on Race Day, he would run my race for me! That was the sweetest thing he’s ever said to me! He is NOT a runner, so it was a huge sacrifice for him to offer.

I rested up and started to feel a little better. On October 25, I woke up at 6am to prepare for Race Day! I ate a bowl of cereal and we headed downtown. It was a particularly cold day in Portland, and I was not feeling 100% yet. Once the gun went off and the race started, I focused on running.

This was my first competitive run ever. I had no idea what to expect, honestly. I found myself running too fast and too hard when I first began the race. I read later that this is a common occurrence with newbies. I probably burned out too fast. But I kept going. I had a goal: finish the race! It was distracting seeing so many people pass me. Older people, a woman with both knees wrapped, passed me! The shame! I tried to run faster. What I really should have done was ignore everyone else and just focus on my own body. It’s very easy to get caught up in the excitement of the race and the people around you.

Half way through the 5k, I walked a few seconds while I drank the water they offered runners. I started to jog slowly to get back to the run. The last stretch of the 5k, I was suffering. I just wanted it to be over with. “How much longer?” and “Good lord, this run is killing me!” and “Damn flu!” Then I saw the crowd gathered at the finish line and I raced to the end.

I saw Michael at the finish line, taking my picture. I ran across the finish line and hugged him. I felt shaky and exhausted. I finished the 5k in 31 minutes! We walked down to Pioneer Courthouse Square where the after party was happening. I got some snacks they had for the runners: half a wheat bagel and half a banana. I was sweaty and felt tired and hurt and just wanted to leave. We didn’t stay for the party. When I got home, I showered, laid down on the couch and immediately fell asleep for 2 hours!

The following three days, I was so sore I could barely walk! Of course, days after the fact I read that marathon runners take an ice bath after their runs. Next time I definitely will do that.