Michael and I got invited to the Nike Employee Store recently by his step-brother Doug. We’d never been and honestly I didn’t know what to expect. I figured it was just like the outlet store. It was better! Everything was at least 50% off the regular price, so much better than the outlet. I ended up getting some new workout shorts and capris, a t-shirt and some shoes. It was a great deal!

After shopping, we decided to stop somewhere for dinner to avoid the icky traffic that is Highway 26. Neither of us go to Beaverton very often (it’s a suburb of Portland) and it’s kind of a weird place–land of strip malls and chain stores. The traffic is terrible, too. So an impromptu date night was just right.

Michael suggested the Hall Street Grill. I’d never been and it had been many years since he was there. I was pleasantly surprised at how classy and beautiful the interior was. It was very charming and the tables were intimate. 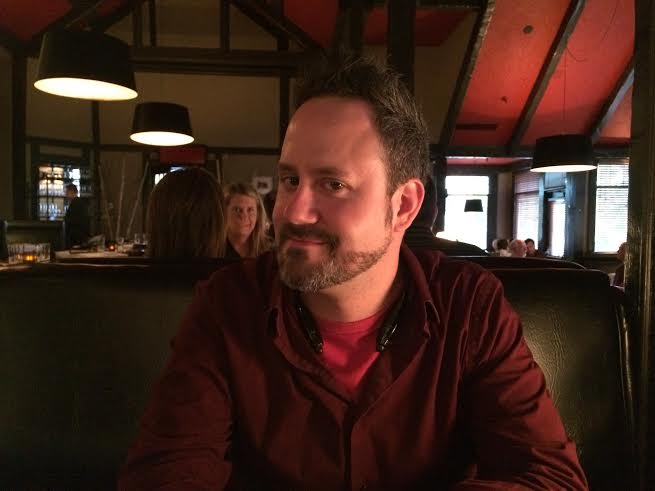 Our server was top-notch. He was clearly someone who loved being a waiter and was really good at it. He was friendly and easy going, prompt and had suggestions for us. Michael tried a whiskey he’d never heard of before and enjoyed it– the WhistlePig Straight Rye.

The waiter brought a bread basket which we hungrily ate despite trying to avoid bread. It came with the most amazing butter I’ve ever had. It was whipped; light and creamy and had (I think) sweet onion in it. The butter was sweet and it was so good!

I asked the waiter about the white wine and what he suggested. I said I liked a dry, crisp pinot gris/grigio. He suggested either the Pinot Grigio Graffigna Reserve or the Waterbrook Chardonnay. I’m not really a fan of chardonnay but he said this was made in a steel barrel or something instead of oak. He brought a taste of both for me to decide. 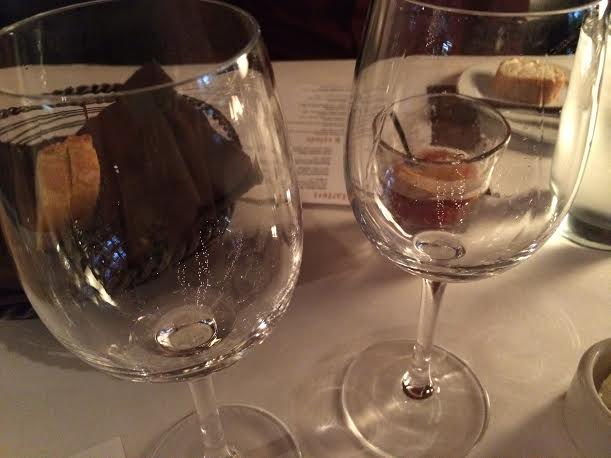 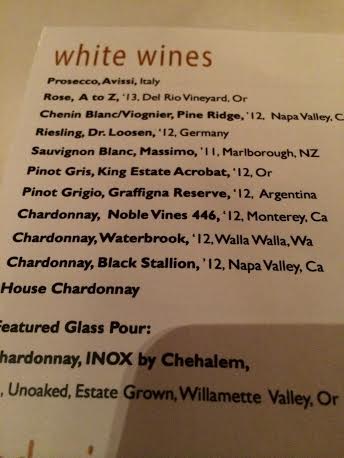 I knew the second he set the glasses down on the table which one I would order (the Pinot). 🙂 I could tell by the crisp, almost clear color that it was what I wanted. The chardonnay had a buttery, light caramel color to it. 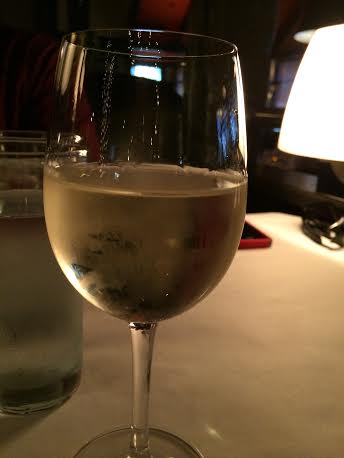 I loved the pinot! I decided to go light on dinner. I ordered a side Caesar salad and a starter plate that turned out to be just the right amount of food for me.

My dinner was the housemade gnocchi. It came with peas, carrots, snap peas, lamb sausage, hazelnut pesto, and large flakes of pecorino. I had to say it was probably one of the best pasta dishes I’ve had in a very long time. 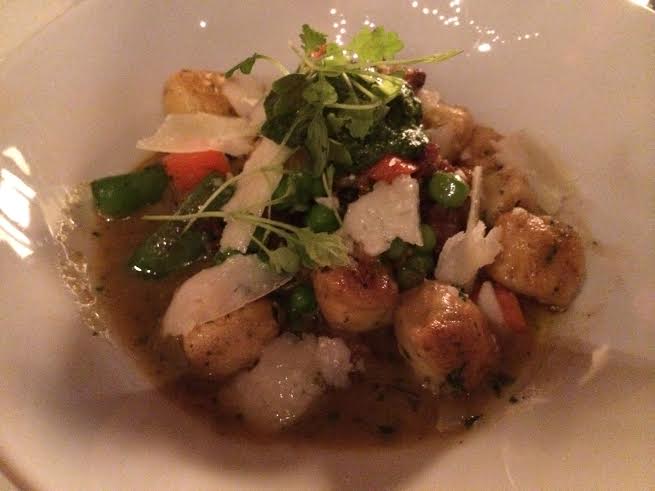 The gnocchi was tender and soft. The sauce was so amazing I couldn’t stop eating it and wished there was more when I was done. The snap peas were crunchy and the other vegetables were fresh and flavorful. I absolutely adored this dish! Everything went together nicely and I know this will be a dish I’ll think about for a long time.

Michael ordered the NY strip steak. It was cooked in a port wine demi glace that was rich in flavor and color. It came with a twice baked potato topped with chanterelle and shitake mushrooms, gorgonzola cheese and there were crunchy onions on top of the steak. 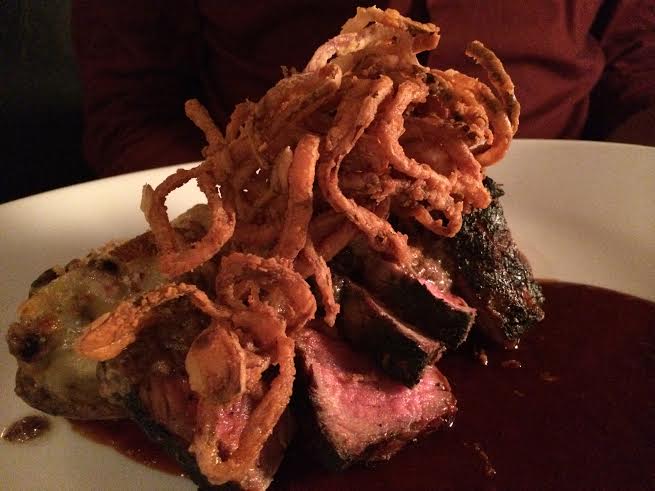 I had a bite of his steak. The sauce was so rich and the steak was done just right. I REALLY wanted one of those crunchy onions on top but Michael wasn’t sharing that. 🙂 We did not have room for dessert, but their menu looked great!

It was a lovely dinner and I’d most definitely go back to the Hall Street Grill–even if it IS all the way in Beaverton. The food was fantastic–kudos to the chef! The prices were a little on the spendy side but they do offer happy hour in the large bar area. There is a large parking lot, which makes it easy, and it looked like they had a big banquet room for events.

We got home in record time, having missed all the ugly traffic, and I played with Bella for a bit before bedtime. She is such a good puppy! She’s very good with sharing. A lot of dogs don’t like to share their toys and get possessive and growl. Bella doesn’t do that. She will happily give you her toy (as long as you throw it so she can chase it). It was a nice, low key evening.

Runners like toys. There’s no getting around it. Someone that’s into fitness will love getting some running toys for the holidays. Last year Michael’s mom gave me a gift card to a nearby running store for Christmas. Best present ever! I desperately needed a new pair of running shoes.

If you have a runner in your life, here are a few of my favorite things you might want to get for them:

Nathan Speed 2 Waistpack with Two 10-Ounce Nutrition Flasks–I have one and I love it. It worked great for long training runs. I used it when I ran Hood To Coast. It’s a must have for any runner. I like that it doesn’t slosh around too much either.

GUs–A runner needs fuel. I like GU brand personally. I’ve tried almost everything out there and decided that GUs tasted less like chemical burning than most of the “energy” things out there. Get a case for your runner.

Garmin!–Oh my gosh! If you bought this for the runner in your life they will LOVE YOU. When I was running a lot I desperately wanted a Garmin. I was such a nerd about my stats and really wanted one of these babies to track all of it. I never got a Garmin but that leads me to my next item…

Polar Heart Rate Monitor–I never got a Garmin but I absolutely love my Polar HRM. It absolutely changed the way I worked out, for the better. Being able to properly track my calories made a huge difference in my weight loss. I love my HRM and would never go back to not using one.

Running Shoes–New Runners often make the mistake of buying cheap shoes. Sometimes it’s about commitment, we aren’t sure we’ll stick with it, we don’t have the money, etc. But investing in a GOOD pair of shoes will make a world of difference. Bad shoes = injury. Take the time to get fitted for good shoes. And then buy them for cheaper online. 🙂

Tune Belt Sport Armband for iPhone/Blackberry–A cheap little stocking-stuffer that will make your runner happy. I prefer to have my music when I run or workout and this makes it easy.

Smart Wool Socks–I don’t wear anything else when I workout. I love my SmartWool. They feel great, they never give me blisters, I don’t sweat in them. They are the perfect socks in my opinion. I have thick pairs for snowshoeing or hiking, thin pairs for running. Love!

Compression Tights–Finally, my favorite fitness item I own is my compression tights. Michael got them for me for Christmas last year and I love these. They feel so fantastic. Compression tights are a lifesaver for people training for long distance runs or cycling events. They work great during events and also for recovery afterward. 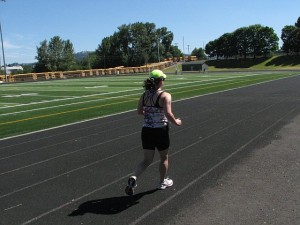 Lots of fun toys for the runner–or great ideas for you to make your holiday wish-list. Enjoy!

QUESTION: What are your favorite running items?