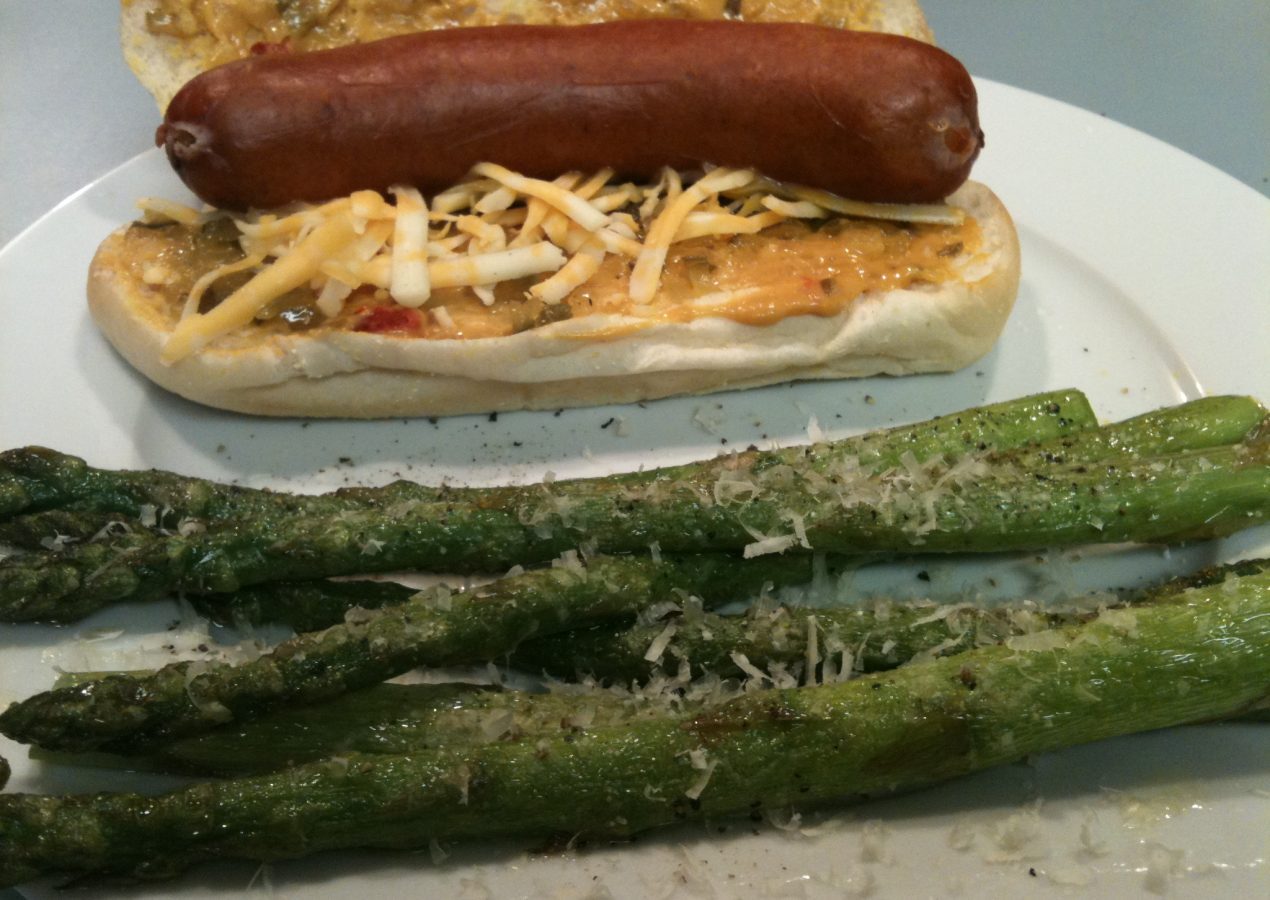 I suppose one good thing about the head cold I’ve had this week is Zero Appetite. I haven’t felt hungry in about four days. In fact I’ve had to force myself to eat food the last few days. I’ve been drinking lots of water, Airborne, Odwalla super juice and apple juice to get the virus out of my body. I stayed home from work Friday and I skipped the pool too (I miss swimming). Michael got home from work Friday and we were both feeling tired and run down. That meant an easy dinner.

Michael cooked the asparagus in the skillet with Grapeseed Oil. I seasoned it with salt, pepper and freshly grated Parmesan. The spicy sausages were good and hit the spot.

I was glad I ate because I needed nourishment (even though my stomach felt really full without food). It was nice to have fresh asparagus too after so long without.

Saturday morning I woke up and felt somewhat human. I decided I’d give a workout a try. I wasn’t sure how much energy I would have so I decided to workout at home instead of going to the gym like I normally do on Saturdays. I started with the Nike Training App Cardio Burst that I tried a few days ago (15 minutes) then I tried a brand new workout:

Hardbody HQ: a 30 minute Kick Your Butt session. There was so much variety to the workout I had to take three photos of it to show all the moves. Here’s #2:

And the final installment of the Hardbody workout:

My favorite moves were the Straight Leg Kicks, Flutter Kicks, Ski Jumps and Mountain Climbers. I think I”ll have Michael take a video of me doing some of these exercises to give you guys a demonstration.The Flutter Kicks were an instant ab burner.

I did the first workout (15 minutes) and most of the Hardbody workout (25 of 30 minutes) for a total of 40 minutes before hopping on the bike. I burned a nice amount of calories during that 40 minutes too:

My pre-workout snacks were two kiwis and some Odwalla juice. Not what I’d normally eat before a workout but nothing else sounded appealing.

I rode the bike for about 40 minutes while I watched my shows and then called it good. Despite my head cold and coughing fit first thing that morning I had a good workout. I wasn’t tired, weak, sore or short of breath. I’m glad I got my body moving after 2 days of being a sloth.

Michael and I split a 3 egg omelet for breakfast. 3 eggs, splash of 1% milk, shredded Colby Jack cheese, green onion and 3 slices of bacon crumbled. I added some salsa and sour cream to my half of the omelet. Despite splitting it, it still felt like a gut bomb. Omelets are just too big for me (which is weird because I normally eat 1.5 eggs for breakfast anyways).

We left the house with a list of errands to take care of, planning on eating lunch out somewhere. We never did get lunch and I still wasn’t hungry! What the heck? We drove down to Woodburn to hit the outlet mall. The Nike store is our favorite and we both had 20% off coupons for Nike (unheard of!). I got a new running hat and a birthday present for my mom. I also got a T-shirt at Banana Republic and Michael got a few things too. Then back to Portland to go to Sports Authority. They sent us both $25 off coupons in the mail recently–with no minimum purchase required. How weird was that? We couldn’t let $25 go unspent so Michael used his $25 off for a workout shirt and I got a Nike workout shirt and one pair of Under Armor underwear. Michael swears by them for their wicking powers. I thought I give it a try.

There were more errands to run and then finally we were home. I was exhausted. It had been a good but long day doing stuff. I definitely felt like I could take a nap. I opened the Valentine present from my mom:

There’s a storm brewing in Portland tonight. I think a fire is needed in the fireplace and some of this hot cocoa needs to be sampled….Have a great weekend!

QUESTION: Have you tried the Nike Training App yet? What’s your favorite workout so far?

Why All or Nothing Doesn’t Work For Me